We set out our thoughts on Ukraine following our discussions with the IMF team during the recent virtual IMF/WB Spring Meetings. We would like to thank IMF staff for their time. The views we set out here are our own. We retain our Hold recommendation on the US$ bonds, with a yield of 7.2% (z-spread 572bps) on the 2032s on a mid-price basis as of cob 15 April on Bloomberg.

There seems little tangible progress to report on the status of the IMF review at the Spring Meetings after the Fund announced in February that it had put the first review of the SBA on pause. Discussions continue at all levels, and remain constructive, and these are set to continue until they can find a resolution, at which point the Fund can proceed with the review. But the issues are difficult; it is hard to build political and popular support for them.

That said, the recent build-up of Russian military forces on Ukraine’s borders and in illegally occupied Crimea may have overshadowed the programme discussions, shifting investor attention and opening up another area of uncertainty, although it is too early to say what the impact will be.

The four broad areas of focus in this review remain the same as they were at the time of the virtual Annual Meetings in October; namely: i) the central bank (NBU), ii) fiscal, iii) energy, iv) anti corruption and judiciary.

We discuss the issues within each one below (for background, see also here):

Timing for completion of the review is therefore still unclear to us. The government remains optimistic, with reports suggesting that relevant legislation could be passed in coming weeks (as always), and that it expects two disbursements this year (we assume, US$0.7bn each), or even implying that reviews could be merged (ie combining the first and second). But this sounds optimistic.

While we do think things could move pretty quickly when ready, it still seems some way off. Energy and the judiciary are particularly challenging. Market expectations may therefore slip from Q2 to Q3, if they haven’t already. The programme is also due to expire in December, so time is also now beginning to run out. But it is premature to talk about what happens then and any extension or successor arrangement.

The economy surprised on the upside last year with not-as-deep a contraction as expected. Real GDP fell by only 4% (on official figures) compared to initial expectations of -7.4% (April 2020 WEO). This was due to the better-than-expected performance of the household sector and stronger net external demand. It also provides a bit of momentum coming into this year, with the IMF revising upwards its 2021 growth forecast by c1ppts from its October WEO to 4% in the latest WEO, although this only brings the Fund more in-line with the NBU’s forecast of 4.2% and the Bloomberg consensus of 4.4%. However, Covid restrictions and the slow vaccine roll out could weigh on the economy.

The central bank embarked on the beginning of a tightening cycle last month, responding to inflation rising above its target and higher inflation expectations. The NBU raised its policy rate by 50bps to 6.5% on 4 March, as CPI inflation rose to 7.5% yoy in February from 6.1% in January (since the Spring Meetings, the NBU hiked rates again on 15 April by 100bps to 7.5% as inflation rose further in March to 8.5%). But real rates are still negative.

The current account balance is expected to see a big swing this year, from a surplus of 4.3% of GDP in 2020 to a deficit of a 2.5% in 2021 (based on latest WEO projections). However this shouldn’t be a surprise, as the same kind of move was expected in the October WEO. International reserves have eased a bit this year, to US$27.0bn (end-March) compared to US$28.8bn at end-January, but remain strong, while the hryvnia (UAH) has depreciated modestly since mid-March modestly, reversing some of its earlier strength this year.

There are opposing forces. Despite delays to completing the review, the short-term financing picture seems reasonably manageable. Reserves remain healthy, eurobond yields suggest Ukraine still has market access at generally favourable rates (and the government recognises this), and an SDR allocation amounts to a potential windfall of US$2.7bn (subject to IMF Board approval, although it isn’t expected to hit the NBU balance sheet until August). This may provide a bit of respite, although investors may also be concerned that the SDR allocation – and market access – may reduce the authorities’ incentive to press ahead with what is required to complete the IMF review.

However, overall public sector gross financing needs (GFN) remain large, becoming heavier in the second half. The government’s financing programme projects GFN this year at US$23.7bn (similar to last year), and relies on IFI financing (with access to Fund disbursements unlocking other IFI money) and market access, through a combination of eurobonds, local currency issuance and non-resident inflows. It targets US$6.2bn from external markets and US$17.1bn (equivalent) from domestic markets.

Hence, continuing delays to the IMF review may complicate the financing outlook. We think the external target may be difficult to achieve if the IMF review continues to be delayed, holding up Fund disbursements and other multilateral funding behind it, and potentially with implications for market access. We think the government may have anticipated US$2-3bn from official money this year, plus a contribution from eurobonds (eurobond issuance did amount to US$4bn last year). But even with still favourable yields, Ukraine hasn’t issued since July, after the programme was agreed, only succeeding with a small tap in December, while this year’s market volatility shows market access cannot always be relied upon – Ukraine yields ('31s) are up c100bps this year. It is not clear how the authorities will cover any external shortfall. Meanwhile, the domestic funding target may also be challenging. The government funding target already anticipates a 25% increase in domestic financing this year compared to what was already a bumper 2020. Any external funding shortfall that sees a substitution towards domestic funding may put even more pressure on domestic sources and upward pressure on domestic yields.

Implications of the Russia situation

Russia's recent escalation of tensions presents another more imminent source of concern for bondholders. On the one hand, it increases perceptions of Ukraine country risk, even if it doesn’t lead to outright war. Ukraine ‘32 yields seemed to rise about 40bps in reaction to the news (perhaps a mild response in itself). It might also weaken the currency and knock non-resident inflows into the government debt market, on which the government’s domestic funding target partly depends.

But on the other, the rallying of international support for Ukraine may lead to more optimism about donor support, although we are not sure it weakens IMF lending conditions. Indeed, yields have fallen since the IMF meetings, with the bonds reversing their losses this month, buoyed also by positive news this week about a possible Biden-Putin Summit. 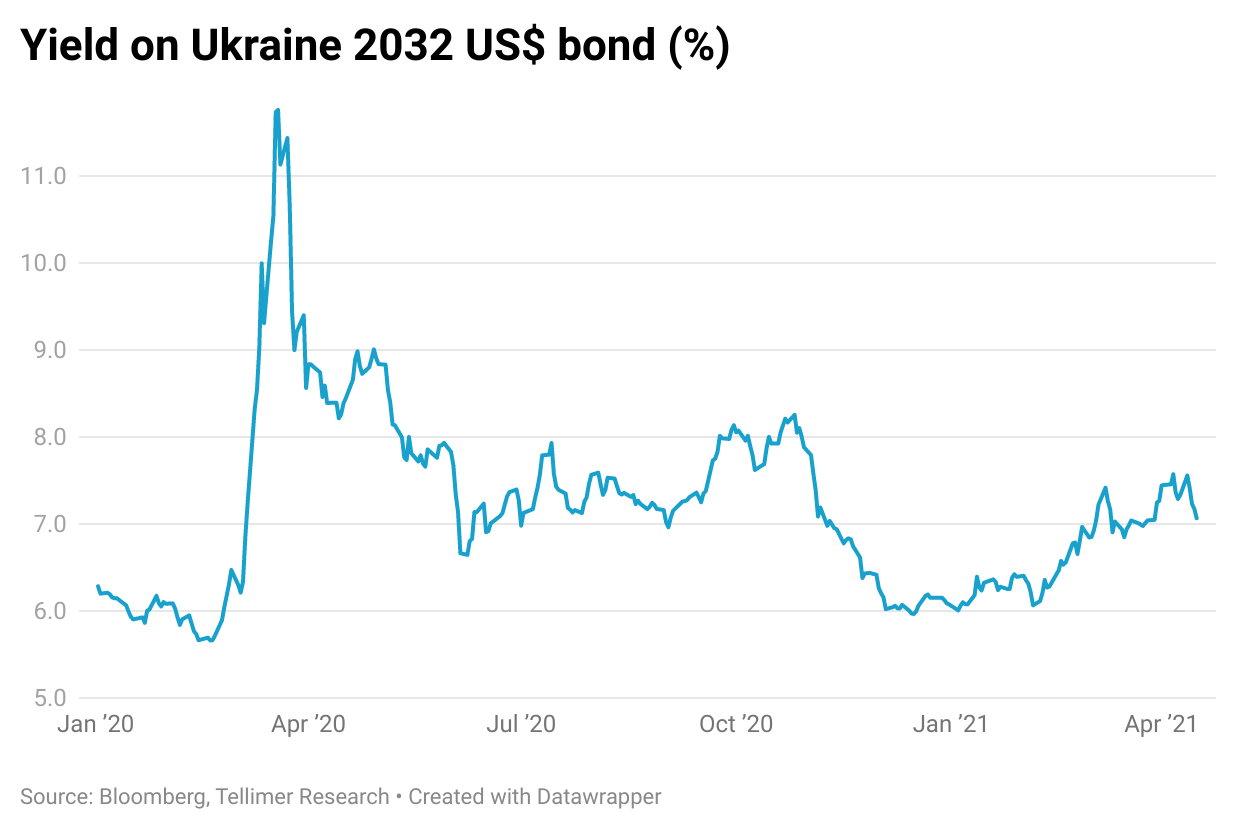