Ukraine: IMF readies itself for review mission. Then what?

The IMF confirmed at its regular press briefing yesterday that a virtual review mission is planned for Ukraine later this month, consistent with comments on timing that had been made during the summer. Specific dates will be announced nearer the time.

The announcement comes after typically upbeat comments from the government earlier this week in which the Prime Minister, Denys Shmyhal, was reported in the media saying that Ukraine had fulfilled all its IMF requirements. He expected to receive the next tranche, amounting to US$750mn (under the existing schedule), in late November/early December. However, as we know, there has often been a disconnect between what the Ukraine side thinks and what the IMF think.

While the broad requirements for completing the review are well-known (and remember, it is still only the first review), the precise situation is less clear, in particular, whether any progress and legislation meets IMF standards. The issues for the review, reiterated in yesterday's IMF press briefing, include strengthening the governance and autonomy of the National Bank of Ukraine, judicial reform, restoring and strengthening the anti-corruption framework and ensuring a sustainable fiscal position (the authorities submitted a draft 2022 budget to the Rada on Wednesday with a 3.5% deficit).

However, it is difficult for us to judge compliance against these review criteria and what might still be outstanding, but to give it its dues, Ukraine has made some progress in recent months and it is only right for the IMF to take stock, without preempting the outcome, after putting formal discussions on pause back in February. That said, the EU's decision this week to allocate the second tranche of its macro-financial assistance (amounting to EUR600mn) may be just that, an endorsement of the government's reforms, and could bode well for the success of the review.

But with the IMF programme also due to expire at the end of this year, the review takes on an even greater significance. Not a single review has been completed since the US$5bn 18-month Standby Arrangement (SBA) was approved in June 2020 in the aftermath of Covid. It would not go down well in the Fund if the programme was to run its term without at least one review being completed (to say it would not be seen as a successful programme would be an understatement). But does the IMF stick to its guns, or soften its approach to get this review over the line, or have the authorities actually done what they were asked to do?

If the IMF is satisfied that requirements have been met, it might even decide to combine some reviews, to make up for lost time. US$3bn remains after the initial disbursement of US$2.1bn was made at programme approval. Four reviews were planned, with the first two due by end-2020 and both scheduled to disburse US$0.7bn each. The IMF might decide to combine the first and second reviews, and disburse US$1.4bn before the programme finishes, or even combine the first three reviews given we've passed the third review date too (as an example, the IMF approved the combined second, third, fourth, and fifth reviews for Pakistan in April). But there seems little chance of completing another review before the programme expires (an alternative, if progress was deemed insufficient, would simply be to cancel the programme and negotiate a new one, but we don't think that is likely).

There has even been a suggestion in the market that the programme could be extended to allow it to be completed. This is possible, but it seems a step too far to us and unnecessary. And why should we expect much greater progress in say the next six months, after the snail's pace of the last two years?

Instead, the conversation will turn to whether Ukraine wants and needs a successor arrangement, and if so, what sort. We set out below some initial thoughts on what might follow.

Recall that this SBA was only approved as a stop-gap because of the pandemic, an urgent response, in light of likely greater financing needs and with lighter conditionality, and replaced the reform-focussed Extended Fund Facility (EFF), which was being drawn up before the pandemic hit. Staff level agreement (SLA) on a new EFF was reached in December 2019, although in typical Ukraine style, delays in getting it to the IMF Board meant it wasn't in place by the time the pandemic struck in March. The EFF was to follow the previous arrangement, an SBA over 2018-2020, which itself finished prematurely and was essentially cancelled before it expired in favour of the new programme.

Today, however, there is less of an obvious balance of payments need, evidenced by the improvement in international reserves, yet delivering structural reforms over a medium term horizon is as urgent and necessary as ever. This points towards an EFF rather than another SBA.

However, conversely, given the difficulties to date in implementing structural reforms, perhaps the authorities (and IMF) would prefer a precautionary SBA, shorter and smaller, with lighter conditionality (macro-based rather than elusive structural reform targets), to reinforce policy discipline and catalyse other IFI money. Gross financing needs are still sizeable.

In practice, though, from a bondholders’ perspective, it doesn't matter which it is (SBA or EFF), as long as there is a programme. 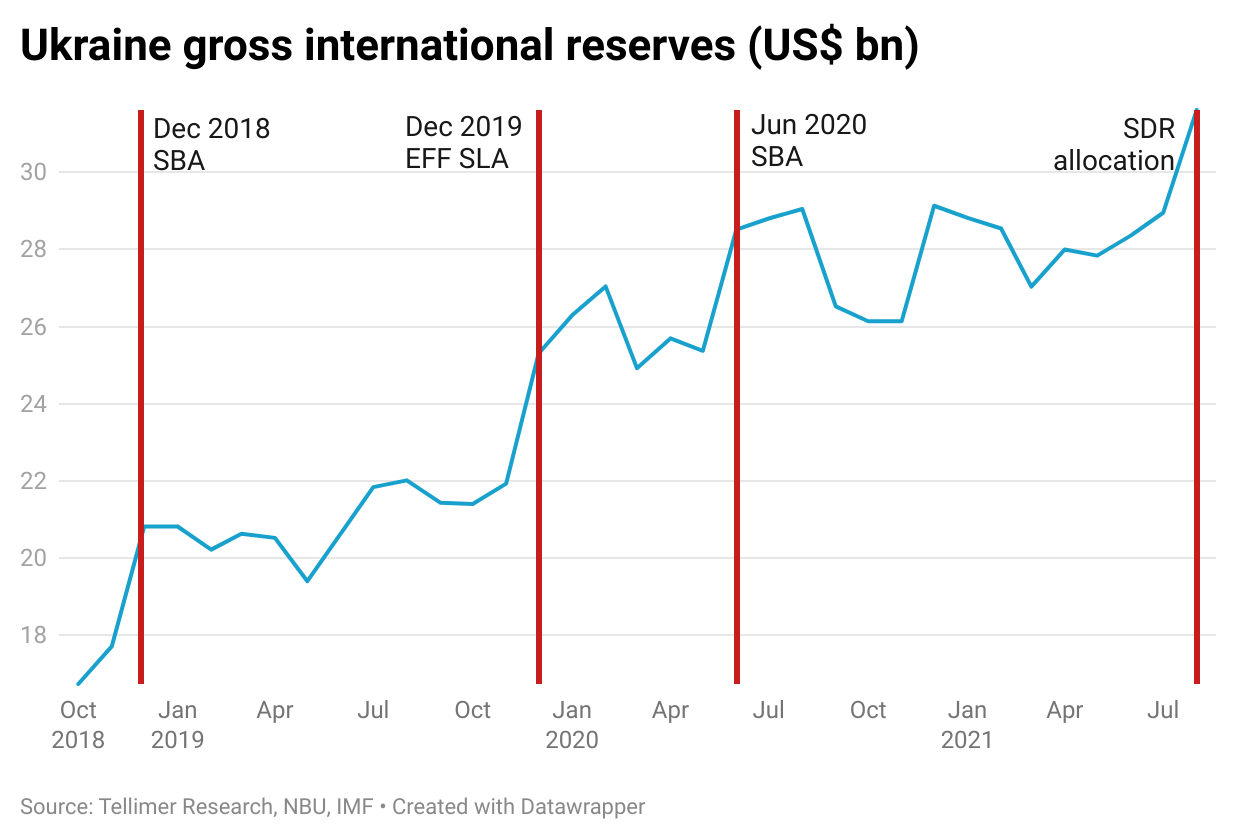 Alternatively, is Ukraine ready to graduate from the Fund? Probably not. But Ukraine has been in an IMF programme pretty much continuously over the last seven years, since the political crisis and conflict with Russia over 2013-2014 (it has had four agreements since then: SBA 2014-2015, EFF 2015-2018, SBA 2018-2020, SBA 2020-2021), albeit with patchy performance and long gaps between reviews, so might it be time for Ukraine to stand on its own two feet? And, from the IMF's perspective, why bother with another programme when we know what's going to happen? However, even with the patchy performance, the IMF's mere presence does underpin market sentiment and it may be a different story if IMF programme engagement were to end (then we would see how much Ukraine needs the IMF, and how much bondholders rely on the IMF).

We retain our Hold recommendation on the US$ bonds, with a yield of 6.3% (z-spread 504bps) on the 2032s on a mid-price basis as of cob 16 September on Bloomberg. Yields have oscillated in a narrow range around c6.5% in recent months (since the wider market sell-off earlier this year following fears of a repeat of the Taper Tantrum, and following an easing in border tensions with Russia). The bonds have marginally outperformed the index this year too, with a total return of 2.7% YTD compared to 0.6% on the Bloomberg EM Aggregate Index. 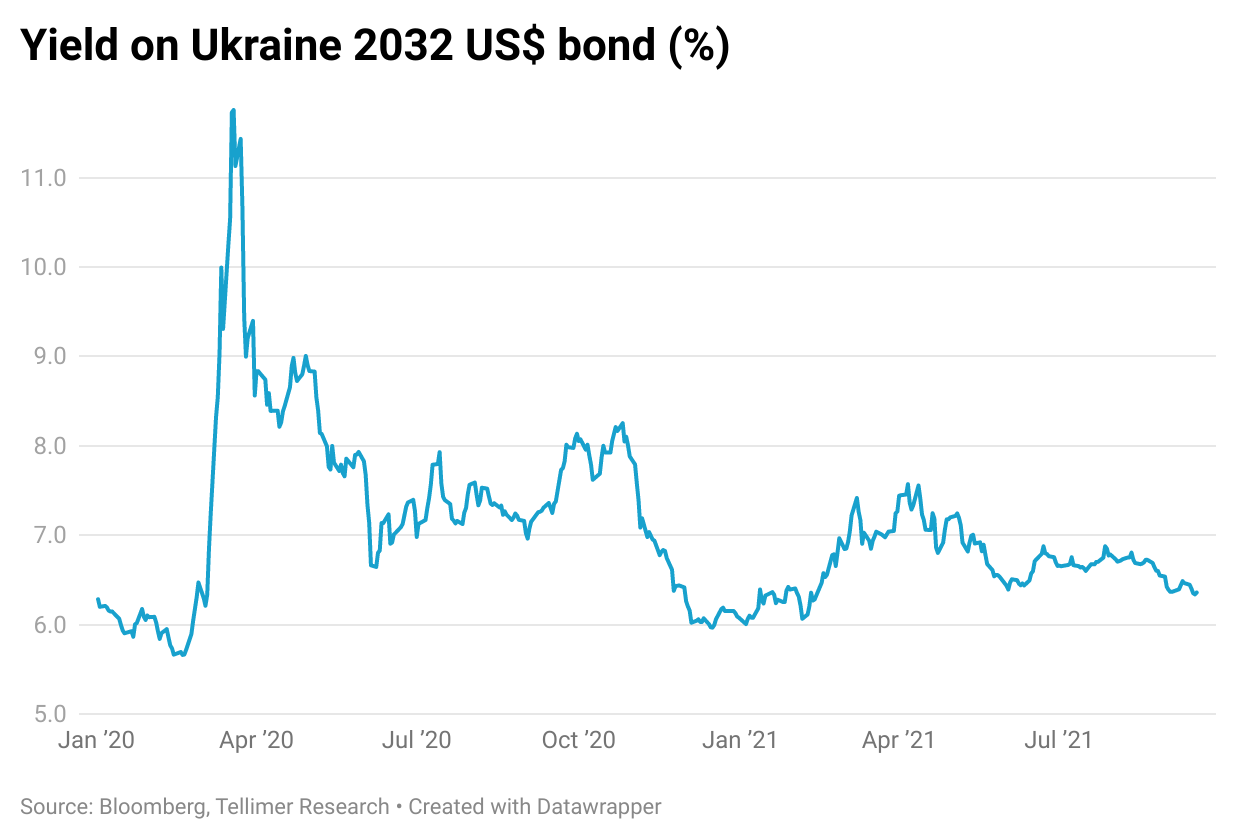