The IMF Executive Board approved the long-delayed first review of Ukraine's Standby Arrangement (SBA) yesterday. The decision was expected after the date of the board meeting was added to the board schedule recently and follows the staff-level agreement announced on 18 October.

Recall, the US$5bn 18-month SBA was approved in June 2020 but completing the first review, which is now over a year late, has been subject to repeated delays.

Board approval of the first review allows the disbursement of US$699mn, bringing total disbursements under the programme so far to about US$2.8bn, some 56% of the total available (while this sounds grand, in practice, there have only been two disbursements – the initial US$2.1bn disbursement on programme approval in June 2020 and this one).

The Board also approved a six-month extension of the original 18-month programme to end-June 2022, which was expected as it had been announced at the time of the staff-level agreement, and a re-phasing of programme disbursements (the new schedule has not been made public yet).

Another US$2.2bn remains under the original programme. It is not clear whether the programme will move to quarterly reviews (which is close to what the review schedule had originally envisaged) over the final six months, which one might assume could entail remaining disbursements being divided equally between two more reviews.

In any case, as we've noted before, it's not so much about the money, or the timing of the review schedule, it's more about compliance with the programme and what this signals about the government's commitment to market-oriented policies.

Board approval was subject to a waiver on the non-observance of the December 2020 performance criterion on government guaranteed debt, but this seems a minor issue and the government has taken corrective action.

Nor did the statement include the usual Executive Board chairperson's statement, which the press release noted will follow. We await publication of the staff report for more detail.

We retain our Hold recommendation on the US$ bonds, although the bonds have been on a weakening trend in recent weeks which has accelerated this week. Yields on the 2032s closed last week at 7.4% (z-spread 609bp) on a mid-price basis as of cob 19 November on Bloomberg, itself about 40-50bp wide of recent levels and 100bp wide of its lows in September before the general market sell-off. However, yields have risen sharply this week, rising 51bp yesterday (Monday) and a further 18bp today (Tuesday) at the time of writing. Yields now sit at around 8.1%, back to the level of a year ago. The price has fallen by 5pts since Friday (from par to US$95).

We suspect the sharp weakening this week reflects an escalation of rhetoric amid rising tensions with Russia, as we recently noted, amid alarming media reports that Russia is planning a winter invasion. 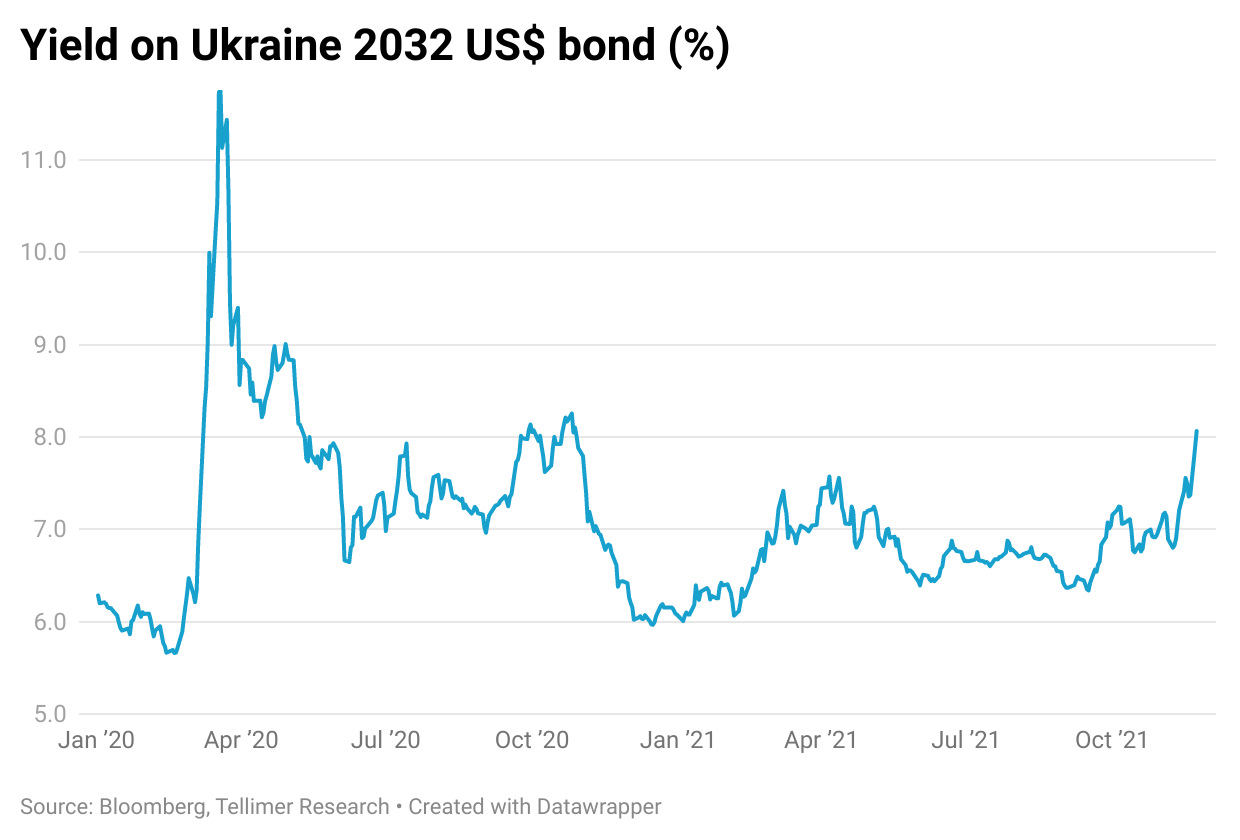