The IMF announced yesterday that it had reached staff-level agreement with the authorities on Program Monitoring with Board Involvement (PMB). The PMB, which in this instance is for a duration of four months, is seen as a precursor to a fully fledged programme when conditions allow and will help catalyse the tens of billions of dollars in external financing that Ukraine needs to continue functioning in the context of Russia's ongoing war. The agreement is expected to go to the IMF Board for approval in coming weeks.

The PMB includes measures to: (i) boost tax revenues and revive the domestic bond market; (ii) contain monetary financing; (iii) contribute to the long-term stability of the financial sector; and (iv) enhance governance and transparency.

Program Monitoring with Board Involvement is the Fund's new non-financing arrangement which appears to have been designed with Ukraine in mind, along with other countries in a similarly fragile position (Argentina tried to get a new facility designed especially for it but, rightly, failed). The IMF's Board approved PMB as part of its toolkit on 5 October. It noted that (certain) countries would be encouraged to request a PMB if they are the subject of an ongoing concerted international effort by creditors or donors to provide substantial new financing or debt relief, or have significant outstanding Fund credit under emergency financing instruments, and its implementation is expected to achieve the purpose of building a track record toward a UCT-quality Fund arrangement. The PMB will be reviewed before the end of September 2023.

So far, to our knowledge, Malawi is the only country to have a PMB approved by the Board, and that was this week, while staff-level agreement on a PMB has been reached with South Sudan, also announced this week.

The PMB is essentially an upper credit tranche quality Staff Monitored Program (SMP) with reviews that go to the IMF's Board. It is designed to fill the gap within the Fund's existing non-financing toolkit between SMPs (which, excluding the HIPC carve-out, are not subject to board review and aren't UCT quality) and PCIs/PSIs (which are subject to board review but both require that debt be sustainable, and that the member’s programme be fully financed). SMPs typically last six months.

The staff agreement on a new PMB for Ukraine is not unexpected after a flurry of activity seen since around the time of the IMF/WB Annual Meetings last month. It follows the IMF Board's approval of emergency financing of US$1.3bn (50% of quota) under the new food shock window (FSW) of the Rapid Financing Instrument (RFI) on 7 October (the staff report was published on 19 October), to help meet an urgent BOP need and catalyse further financial support, and the concurrent announcement that discussions on the PMB for Ukraine were due to start soon. The IMF issued a follow-up statement on 21 October following the conclusion of a staff mission with the Ukrainian authorities held in Vienna, Austria to discuss the authorities’ request for PMB.

The IMF's statement on 21 October noted the PMB will lay out the authorities’ policy intentions to support macroeconomic and financial stability, and present an assessment of external financing needs for 2023. It said the PMB will also aim to provide a strong anchor for macroeconomic policies, further catalyse donor support, and help pave the way toward a fully-fledged Fund programme.

The IMF's statement yesterday noted that economic activity is expected to stabilise next year, with real GDP growth of 1% under the baseline scenario, following a 33% decline this year. Inflation is projected to remain elevated at around 25% on average. That said, monetary and exchange rate policies remain appropriate while financial stability has been maintained.

Meanwhile, the authorities’ 2023 budget plans a very tight expenditure envelope in view of the significant financing constraints, although they intend to take measures to boost tax revenues in order to create fiscal space. The statement adds that new measures that might erode tax revenues will be avoided. But the IMF cautions that renewed efforts are needed towards cementing good corporate governance while the preservation of anti-corruption institutions is essential.

The RFI staff report set out in more detail the toll Russia's war in Ukraine is taking on Ukraine's economy and public finances. It noted that the fiscal deficit excluding external grants is estimated to have reached 13.9% of 2022 GDP as of end August 2022. However, due to the large boost to non-tax revenues provided by external grants, the overall fiscal deficit was lower, at about 8% of GDP. This was mostly financed by disbursement of external loans (cUS$9bn or 6% of GDP) and domestic net bond financing (about UAH194bn or 4.2% of GDP).

However, the fiscal deficit is projected to reach close to 20% of GDP at end-2022, although this is subject to a high degree of uncertainty. Without the revenue boost provided by large external grants (US$10.5bn, about 8.4% of GDP), the deficit would have been much larger, at about 28% of GDP.

But the 2022 fiscal financing gap has narrowed due to sizeable support from international partners and the "coordinated suspension of debt service due by Ukraine". The deferral of debt service obtained from the G7, Paris Club and bondholders is estimated to save about US$6bn in debt service through end-2023. Assuming the timely disbursement of external grants and loans, and the continuing purchases of war-bonds, the residual financing gap is estimated at cUS$4bn (2.8% of GDP). 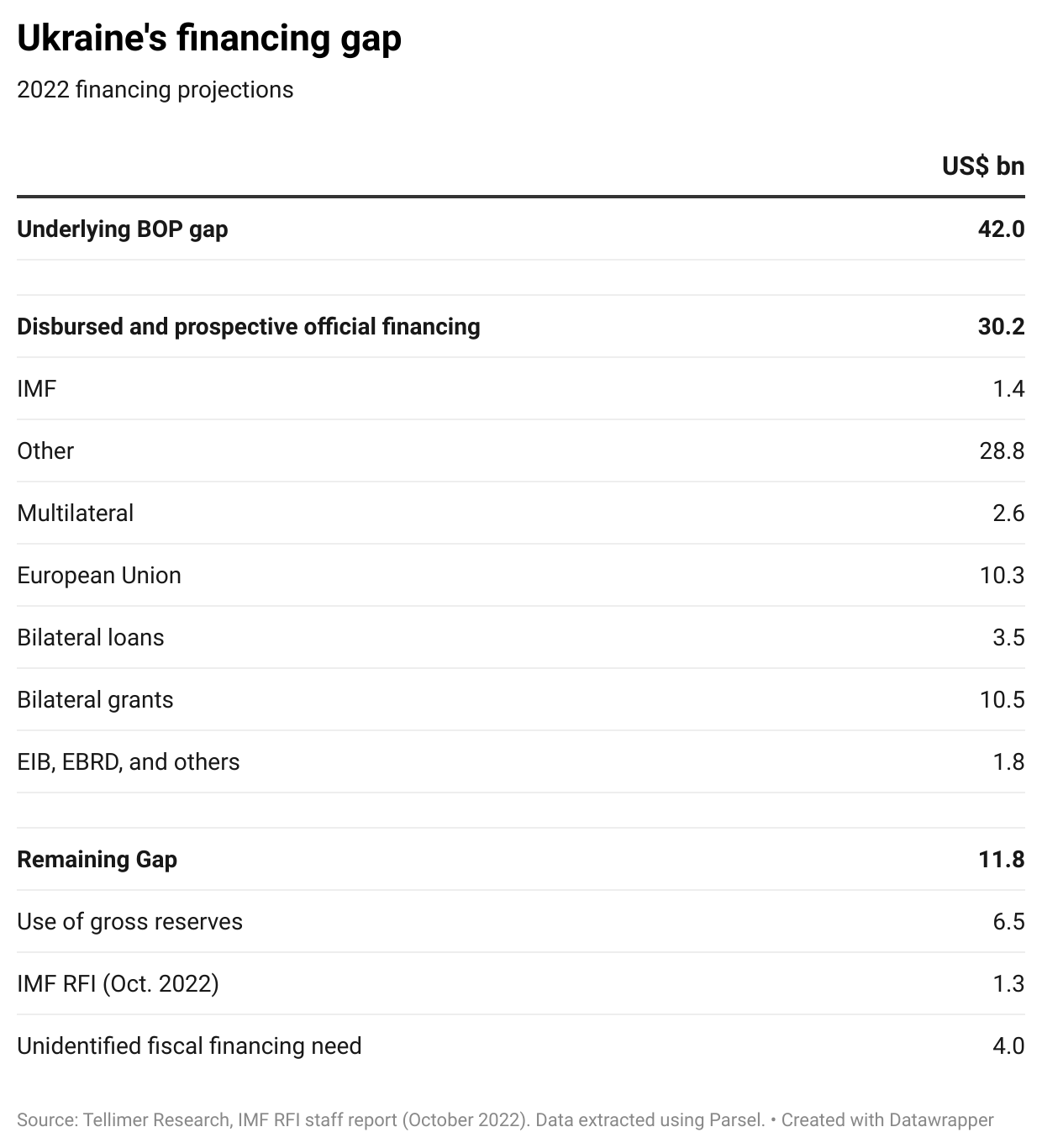 Ukraine's public debt also looks unsustainable, although the IMF's carefully crafted language in the RFI statement skirts around the issue noting that "the balance of probabilities suggests that there are higher risks of debt being unsustainable".

But despite debt sustainability being in doubt, which would ordinarily preclude IMF lending, including under a RFI, we think the IMF is able to move forward on the basis of safeguards provided by donors to protect the Fund's preferred creditor status (ie essentially guaranteeing repayments to the Fund).

The war, which has intensified in recent weeks as Putin reacts to Ukraine's military gains and its retaking of Kherson earlier this month with sustained missile strikes and attacks on Ukraine's infrastructure, including its energy grid, perhaps in a last ditch war of attrition (see here and here), shows no sign of ending.

It is noted that the ongoing war means Ukraine will continue to require substantial external financing to ensure adequate resources for the core functions of the state while preserving economic stability. As the IMF Managing Director (MD) Kristalina Georgieva stated at the Second Ministerial Roundtable Discussion for Support to Ukraine on 12 October, the US$35bn in grant and loan financing that has been committed from Ukraine’s international partners will close Ukraine’s financing gap for 2022. However, Ukraine’s financing needs will remain very large in 2023, and this will require the continuing support from international partners.

The IMF estimates that Ukraine will require around US$3-4bn a month in 2023, in this "recovery phase", and this could be up to US$5bn if destruction of infrastructure and economic activities worsens. And this is before we even get to the "reconstruction phase" – the World Bank estimates total reconstruction costs of the order US$349bn.

Hence, the need for the PMB – and a new way for the IMF to have some oversight – to provide reassurance to international partners and help to mobilise the significant sums of external finance that will continue to be needed to support Ukraine. That said, in the context of war, it is not clear to us at what stage the IMF will be able to move from PMB to a full programme.

As for bondholders, they remain in wait-and-see mode following the debt service freeze that was agreed by consent solicitation in August.

We retain our Hold on Ukraine USD bonds, with UKRAIN '34s (was '32s) indicated at US$22.0 (mid-price basis) as of cob 23 November on Bloomberg, albeit they are up c6.5pts (40%) from their lows earlier this month, perhaps due to a combination of domestic factors and the risk-on rally. Meanwhile the '24s (was '22s) are indicated at US$28.

In fact, Ukraine has been the top performer this month, with a total return of 31% compared to 6% on the Bloomberg EM Sovereign USD index. 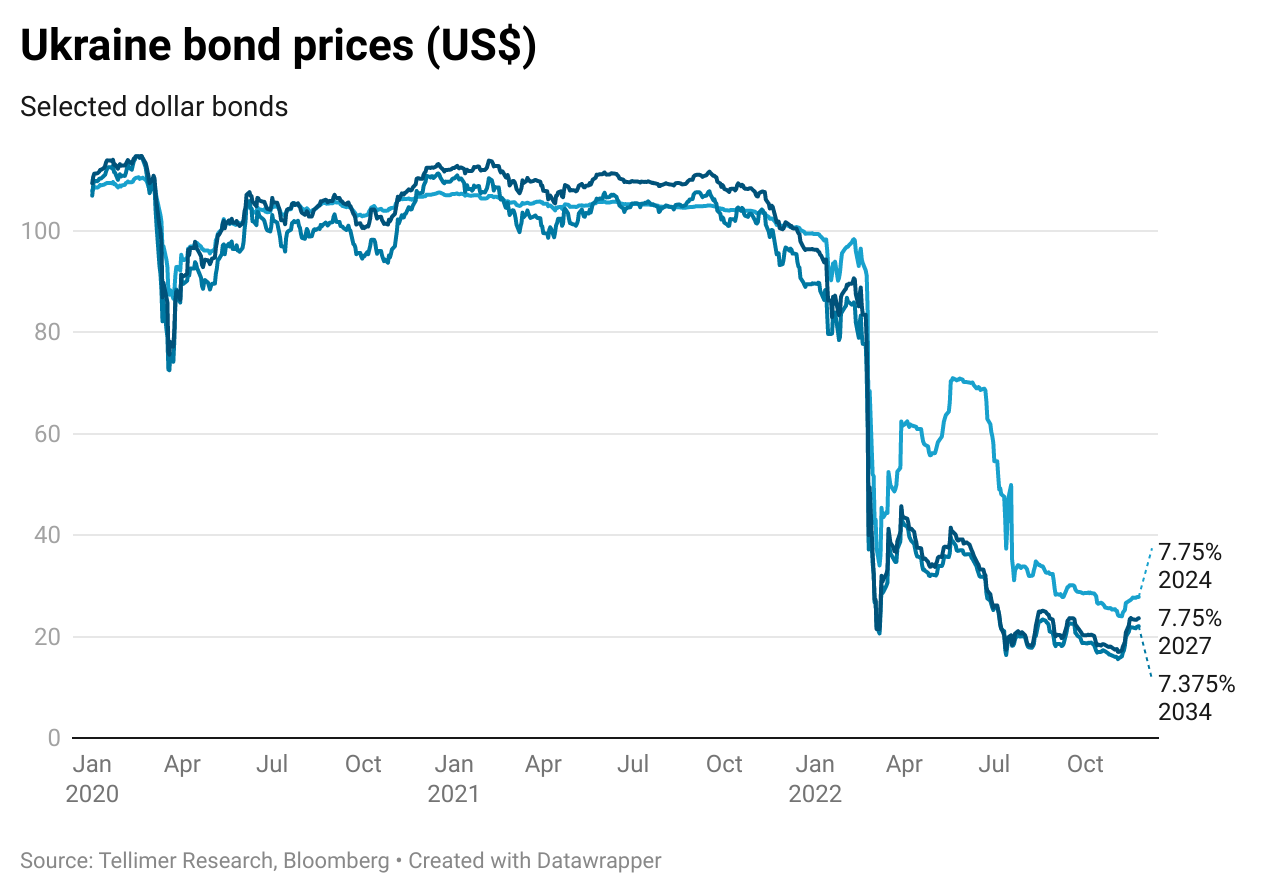