Ukraine's real GDP growth weakened to 1.5% yoy in Q4 (0.1% qoq sa), bringing annual growth last year down to c3.1%, according to the flash estimate published by the country's State Statistical Service on Friday. 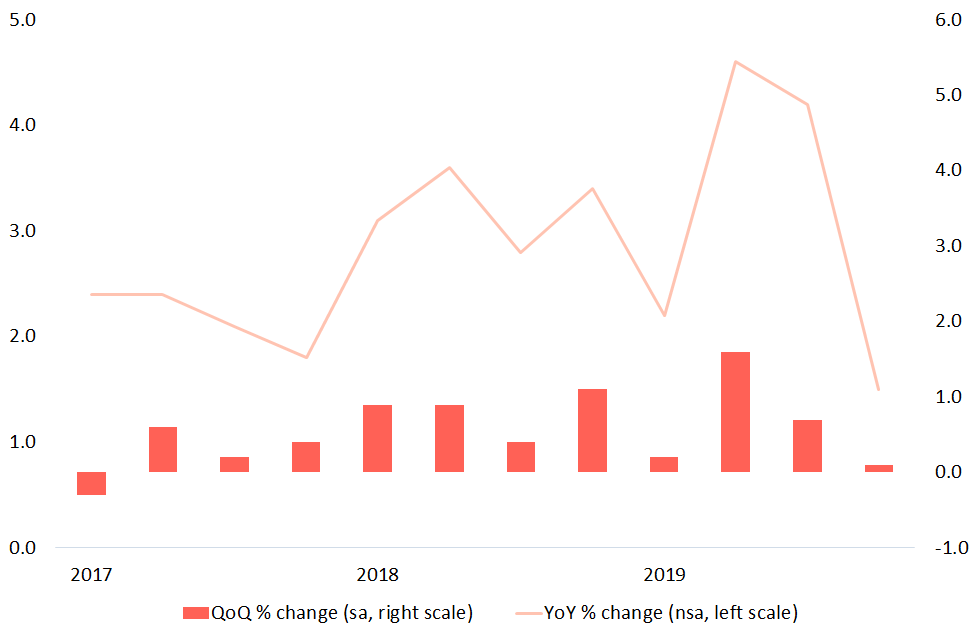 The quarterly growth figure was below expectations – below the Bloomberg consensus forecast for Q4 of 2.1% yoy and significantly weaker than the average rate for the first nine months of the year (which ran at a quarterly average of 3.7% yoy, despite a relatively weak Q1). It was also below the central bank's forecast. The National Bank of Ukraine (NBU) projected Q4 real GDP growth of 2.2% yoy in its recent January Inflation Report. There were also minor revisions to previous quarters in the flash release, which showed annual growth of 4.2% in Q3 (up from 4.1%), 4.6% in Q2 (unchanged), and 2.2% in Q1 (down from 2.5%), producing a modestly softer performance in the first three quarters than had been reported previously (albeit by only -7bps).

The flash estimate implies full year 2019 real GDP growth of 3.1% (compared to 3.3% in 2018), which is weaker than we had been expecting (the final GDP figure, and its components, on a national accounts basis still needs to be confirmed, probably around mid-March, and could see further revisions). We had expected annual growth of c3.5%, based on the first nine months of the year. The NBU expected 3.3% in its January Inflation Report, albeit this was a downward revision from the 3.5% it had expected in its October forecast as it anticipated some of the weakness in the final quarter.

The difference between 3.1% and 3.5% may seem trivial, however, it matters more than it otherwise would because of the impact on the GDP warrants. Not only does it imply a lower payout on the warrants for the first expected payment in 2021 (although this wasn’t going to be large anyway for growth of the order 3-3.5%), but reported growth is now that bit closer to the 3% trigger, and investors may be concerned that it could fall below it if there are subsequent data revisions. The calculation date for the GDP warrants is 30th April of the second calendar year after the reference year (hence, with 2019 being the first reference year, the first calculation date is 30 April 2021).

We estimate the total payment on the warrants (paid in 2021) will be about US$28mn, if the final full year 2019 growth figure is confirmed at 3.1%, and depending on other assumptions (crucially, the GDP deflator and exchange rate). This amounts to a payment of about 0.9pts per warrant on our calculations (expressed in terms of current cash price of c108). This is well below the US$100mn payment the central bank deputy governor reported on 16 January (based on an expected growth rate at the time of about 3.5%; we estimated that payment at about US$110mn, depending on other macro assumptions, and 3.4pts per warrant). One other thing to mention is that there is some uncertainty over what the final dollar amount will be as the calculation depends on a future UAH/US$ exchange rate (the average rate for the 60 days prior to the calculation date).

We remain positive on Ukraine’s GDP warrants. The weaker Q4 growth figure may soften the outlook for the warrants in the near term, raising concerns about the sensitivity of payments to downward GDP revisions and an easing in the growth outlook. However, data revisions might be difficult to predict and could put the authorities in a potentially awkward position. Nevertheless, we remain optimistic about the outlook for this year’s growth and medium-term growth prospects, although this is dependent on final approval of the IMF programme and maintaining investor confidence, while successful passage of land reform presents upside risks to growth. The NBU projects real GDP growth of 3.5% in 2020, rising to 4.0% in 2021. The Bloomberg consensus is 3.3% growth this year, rising to 3.6% in 2021. The sustained fall in yields on Ukraine’s US$ bonds, now below 6% on the 2032 bond, also supports warrant valuations because of the lower discount rate (Figure 2). 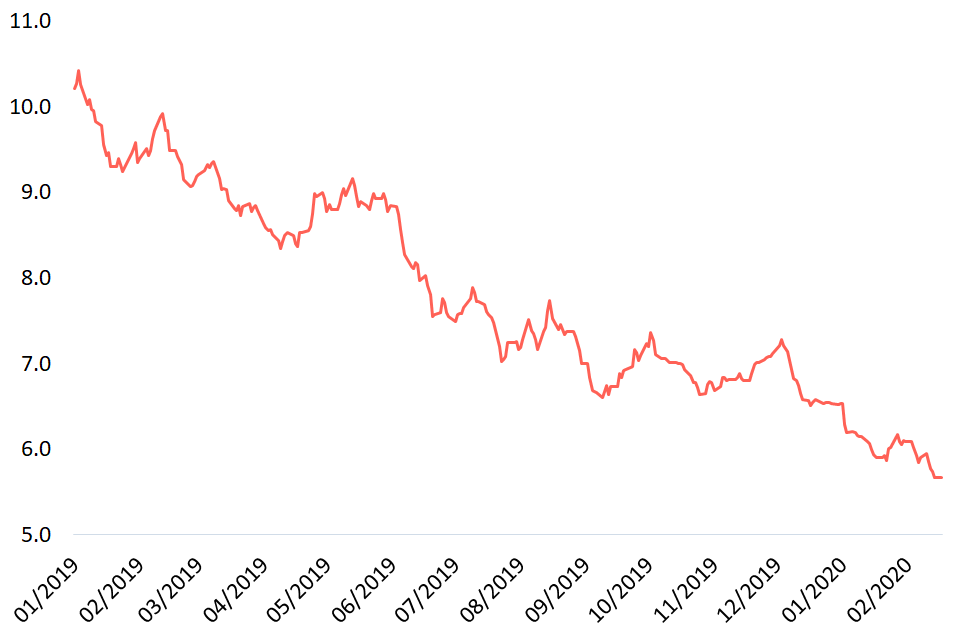 Our model-derived fair value for the warrants is US$135, assuming a cautious 2.5% average growth rate, rising to US$180, assuming 3% growth rate; both at a (cautious) 10% discount rate, and applying a 25% model discount. A more optimistic, but still not particularly aggressive, discount rate of 9% (which is still 300bps over the bond yield), sees our fair value rise to US$150 at 2.5% growth and US$197 at 3% growth.

Figure 3: Price of GDP warrants (US$) 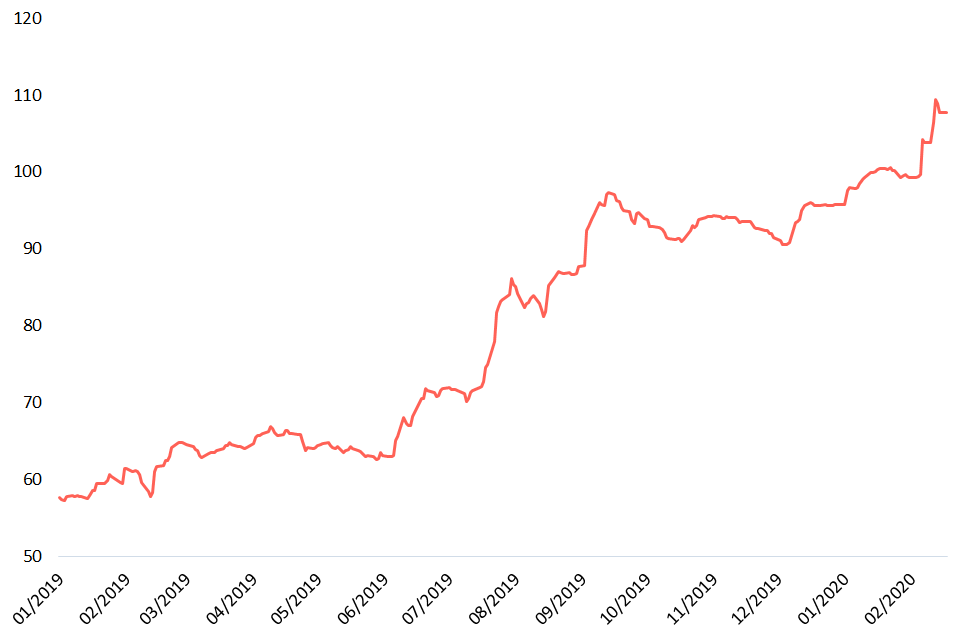