The yellow metal is currently focused on the inflation risks which are embedded in the global macro background. Equally, the geopolitical bid is ever present given the fact that the talks between Russia and Ukraine have stalled. Gold is currently marking time just ahead of the $1975.00/oz mark as we head into the EU session. From a strategy perspective, we remain buyers on any dips but would suggest trimming positions into the Easter break given the lower liquidity.

Other precious metals are also  on the front foot this morning with the noble group keeping a close eye on developments surrounding supplies out of Russia. Palladium is up just over 2.5% on the session thus far to trade at $2379.50/oz into the EU open, while platinum has gained just short of 0.25% on the day. The fact of the matter is it is becoming more difficult to absorb any Russian palladium or platinum supplies, we expect it to become harder in due course, not easier, which will realign the global supply chain of PGM’s which will favour South Africa.

Angola: Reports citing an official from the finance ministry indicate that Angola will hold off entering the international bond market for a second time this year, choosing to finance its budget with a windfall on oil revenues instead. Angola had planned to raise $2.8bn in the Eurobond market this month. The move comes amid turmoil in global bond markets sparked by surging inflation a hawkish Fed, which has pushed up borrowing costs for sovereign and corporate issuers. Windfall revenues due to elevated oil prices mean Angola doesn't need more borrowing.

Egypt: As part of efforts to support Egypt's economy, an Abu Dhabi wealth fund is buying stakes in key Egyptian companies, including the country's largest listed bank. ADQ said that it is buying into Commercial International Bank, Fawry for Banking & Payment Technology Services SAE, Alexandria Container & Cargo Handling Company, Misr Fertilizers Production Company, and Abu Qir Fertilizers & Chemical Industries. The fund, however, stopped short of saying how much it would spend. Such funding is welcome for Egypt, where the economy is being put under increasing pressure from the shockwaves of Russia's invasion of Ukraine.

Egypt: Egypt’s state-run buyer purchased 35000 tons, including French wheat, a rare Bulgarian cargo, and one from Russia. That came at a high price as the amount booked averaged almost $490 a ton from the rate paid in mid-February, just before the war erupted, and the most in at least six years. Even at high prices, the large volume purchased highlights Egypt’s urgency to build reserves, with the cabinet recently stating its wheat stockpiles are sufficient for just 2.5 months.

Ethiopia: The World Bank has approved $300mn to support Ethiopia's economic recovery. According to the lender, the grant will help meet the needs of communities and support the rebuilding of infrastructure destroyed during the conflict in the northern region. Aid has trickled into parts of Ethiopia's war-torn Tigray region since federal and rebel forces declared a truce last month after 17 months of fighting but has only reached a tiny proportion of the millions of people who need it so far.

Kenya: Equity Group yesterday reported that investors from Kenya plan to invest around $1.6bn in the Democratic Republic of Congo after the country joined the East African Community. According to Equity, roughly two dozen companies from the bloc's largest economy are looking to expand in Congo with investments in cement manufacturing to food-processing and finance. The lender, Kenya's biggest by market value, plans to inject $100mn into its Congolese subsidiary EquityBCDC to enhance its "capacity to fund development projects and large mining & manufacturing companies in DRC. Recall the DRC became the seventh member of the EAC this month, bringing the size of the bloc's economy to $250bn.

Mauritius: In a move that represents the single largest intervention in the market on record, the Bank of Mauritius sold $200mn to local lenders and the State Trading Corporation. The central bank sold to lenders at the market-determined rate of 42.95 rupees per dollar, compared with 43.15 rupees per dollar at its previous intervention on April 8. Since the beginning of the year, the bank has intervened in the domestic foreign exchange market for a total of $401.6mn, equivalent to 17.4bn rupees.

Namibia: To combat inflationary pressures stemming from the war in Ukraine and safeguard its currency peg with the South African Rand, the bank of Namibia raised its policy rate for the second straight meeting. The Monetary Policy Committee hiked the policy rate by 25bps to 4.25%. That follows a hike in February that started unwinding some of 2020's extraordinary monetary policy stimulus that was aimed at supporting an economy ravaged by the coronavirus pandemic. According to the central bank Governor, "the monetary policy stance is also a step towards normalizing the current negative interest rate that is conducive to long-term economic growth." Note that the MPC forecasts inflation to average 6% this year, up from its previous forecast of 4.4%. That's after supply shocks arising from the war in Ukraine.

Forex: Supply shocks and a slump in the Cedi drive Ghana’s inflation to a more than 12-year high in March

Inflation remained entrenched in Ghana in March, with the headline reading coming in higher than expected. Specifically, headline inflation accelerated to 19.4% y/y in March from 15.7% y/y in the month prior. This was the fastest pace of price growth in the economy since August 2009 and surpassed consensus expectations of a less pronounced increase to 16.5% as supply shocks amid the war in Ukraine stoked increases in food, fuel, and fertilizer prices. Food-price growth surged to 22.4% from 17.4% in February, while non-food inflation accelerated to 17% in March from 14.5%. 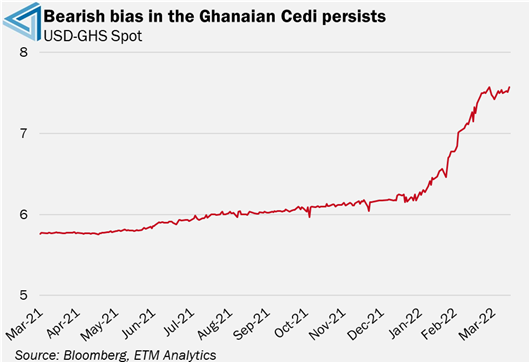 The inflation rate breached the upper limit of the Bank of Ghana’s 6-10% target range for the seventh month, and the sell-off in the Cedi likely added topside pressure. In March, the Cedi weakened and was ranked the second-worst performing African currency tracked by Bloomberg. The Cedi was down by around 9%, with only the Egyptian Pound (-14.27%) faring worse. The Cedi came under pressure amid increased demand for dollars, as investors sought dollar-denominated assets due to unfavourable ratings of the country’s economic outlook by rating agencies such as Fitch and Moody’s. Concerns that Ghana will not achieve its revenue and debt targets sparked a broad-based sell-off in domestic assets.

While the BoG has set up measures to stem the slide in the Cedi and implemented some positive fiscal measures, the weakness in the currency has persisted since the start of April. The Cedi has lost 0.23% on a month-to-date basis. Continued weakness in the Cedi and elevated commodity prices suggest that further upside risks to inflation remain. This could pressure the BoG to raise rates further at the next meeting as real interest rates are now negative after turning positive last month. Note that a high and positive real rate is key to attracting investment flows into Ghana and supporting the Cedi.

Ghana has found itself on the radar of fiscal hawks in recent months due to the fiscal degradation that has unfolded since the start of the pandemic. The impact of the Covid related collapse in economic activity and massive increase in expenditure to shield the economy from the adverse impacts of the many Covid containment measures and slow progress toward fiscal consolidation have resulted in an explosion in the country’s public debt.

Ghana’s debt has risen to 80% of GDP, and the country has slipped into a position of high risk of debt distress. Against this backdrop, investors are now demanding increased fiscal premiums to take on fiscal debt. For context, the spread between Ghana’s sovereign bond yields and the comparable US Treasury yields is trading in excess of 1000bps, a level associated with a country in fiscal distress. 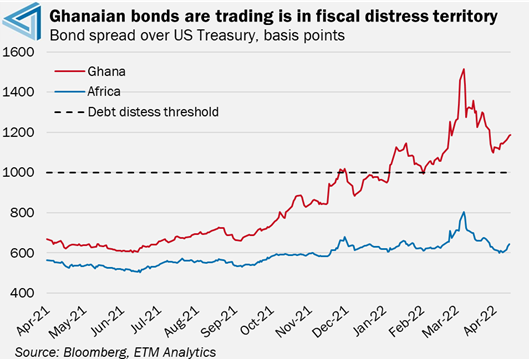 The marked increase in Ghana’s fiscal premiums is effectively shutting Ghana out of the Eurobond market, where the country has been funding a large portion of its budget and debt rollover in recent years. While Ghana has pledged to introduce deep spending cuts and measures to boost the revenue side of the equation, the market is not fully convinced that it will be enough to prevent further fiscal slippage.

Moreover, it is worth noting that the war in Ukraine is complicating the country's fiscal issues and negatively impacting the currency. The adverse external environment, which includes a hawkish shift in policy from major central banks, rising US yields, and dampened risk appetite and expectations for further currency depreciation, is set to keep Ghana's borrowing costs prohibitively high. Ghana has a healthy stock of reserves to cover its near-term debt obligations, limiting near-term debt distress risks. However, the country’s current debt trajectory is unsustainable, and unless bolder measures are introduced, it seems inevitable that Ghana will reach a fiscal cliff.

The effects of the war in Ukraine are far-reaching, impacting global supply chains, pushing up international commodity prices and, in Africa, raising debt risks. In a report published on Wednesday, the World Bank said that Russia’s invasion of Ukraine has amplified sovereign debt risks in Sub-Saharan Africa, increasing the need for better relief measures to avert a large wave of crises in the region’s most fragile countries.

The World Bank said in its report that the percentage of countries in Sub-Saharan Africa at high risk of debt distress has increased to 60.5% from 52.6% in October. Concerns over debt sustainability are reflected in the widening of sovereign spreads for several Sub-Saharan African nations, driven by rising interest rates in developed economies and the war in Ukraine.

Prior to the war, debt levels in Sub-Saharan Africa had risen notably due to the adverse impact of the Covid pandemic on government revenues and increased expenditure to cushion their respective economies and health systems. The World Bank noted that self-imposed austerity programs and Covid-19 relief measures that sought to provide some of the world’s poorest nations with the fiscal space to address health needs, stimulate their economies and help reduce debt or vulnerabilities have been insufficient.

The World Bank added that the G20’s debt suspension initiative, which three African countries, namely Chad, Ethiopia and Zambia, have partaken in, has been fruitless so far. Given the slow progress, the World Bank said that African countries will have to think twice about taking on new loans.

In addition to the fiscal issues that many African countries will face, the World Bank said that the high and increasingly vulnerable debt levels are among the factors that’ll lead to Sub-Saharan Africa’s regional economic growth decelerating to 3.6% this year, down from an estimated expansion of 4% in 2021. Inflation in the region is also expected to rise notably amid the external shocks caused by the Ukraine war. The World Bank forecasts inflation in the region to average 6.2% in 2022, up from 4.5% in 2021.