Ugandan shilling outperforms its East African peers in May

It has been a busy week so far in terms of economic data. Inflation dynamics were in focus yesterday with May inflation data being released for Kenya and Uganda.  Headline inflation in Kenya ticked higher in May, accelerating from 5.8% y/y in April to 5.9% y/y in May. Underpinning the rise in headline inflation in May was elevated transport and food prices. 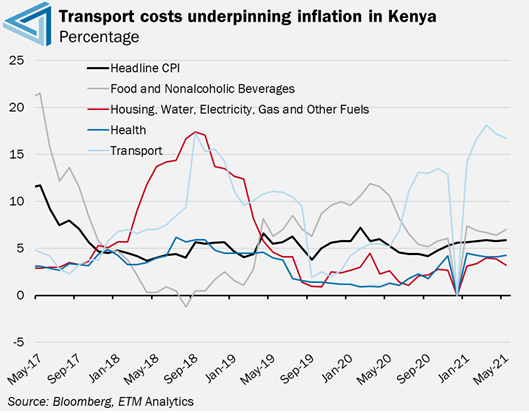 Specifically, food prices, which make up a third of Kenya’s inflation basket, rose by 7.00% in May. The marked rise in domestic food prices comes on the back of heightened international food prices. The Food and Agriculture Organization of the United Nations (FAO) reported that international food commodity prices rose for the 11th consecutive month in April, with sugar leading the increase and cereals resuming their upward trend. Expectations are that international foods prices will remain elevated in the coming months due to supply constraints in some of the world’s largest food producers, such as Brazil and strong demand from China and the US. Transport prices in Kenya continued to surge in May, expanding by 16.67%. The strong growth in transport prices largely reflects the notable recovery in international oil prices. Going forward, while inflation in Kenya is expected to remain within the Central Bank of Kenya’s 5% ± 2.5ppts inflation target range, it is worth noting that inflation risks remain tilted to the topside. 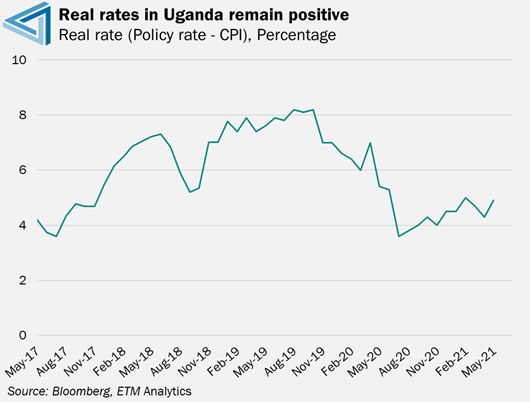 The other notable economic releases out of East Africa this week include Kenya’s Q1 GDP reading and May economy-wide PMI data out of Uganda and Kenya. Investors should closely monitor all three data releases as they will provide some insight into the pace of economic recovery in the respective countries and the region as a whole. While Kenya’s economy was hit hard by the COVID-19 pandemic as measures introduced to curb the spread of the virus stifled economic activity and as global tourism plunged, Kenya is expected to stage a sharp recovery this year. That said, the near term outlook remains bleak with the government announcing over the week that several virus containment measures had either been extended or tightened.

It was a relatively quiet start to the week internationally, with the US and the UK both enjoying public holidays on Monday. As such, the focus has been on China. The continued manufacturing recovery in China and the rest of Asia has been broadly supportive of base metals. The Caixin Purchasers Managers Index edged up to record 52 which keeps the manufacturing sector in expansionary mode, granted Beijing has been vocal lately in an attempt to control price volatility but the underlying drivers remain the same. Stimulus and infrastructure coupled with the decarbonisation strategies are all providing the fundamental anchors for higher demand and thus higher prices.

The Reserve Bank of Australia meanwhile maintained its target 10bps for 3yr bond yields and maintains the parameters for the government's bond purchase scheme. The bank has said that it will not increase the cash rate until actual inflation is sustainably within the 2-3% target range. Board remains committed to remaining ultra-accommodative for as long as it takes the Aussie economy to return back to full employment and for wage growth to become more prevalent. A decision will be made in July over whether or not to extend the yield target and boost its QE.

Risk conditions are favourable today, with European and US equities all trading in the green. Commodities are also generally bid as optimism remains over the economic recovery following the pandemic. Furthermore, investors are positioned for a Federal Reserve that is unlikely to tighten monetary policy anytime soon given the weak state of the economy and the transitory nature of the inflationary pressures, despite prevailing uncertainties. This raises the significance and importance of upcoming US labour data, starting with tomorrow's ADP reading and ending with Friday's payrolls data.

Notwithstanding the broad-based decline in the dollar last month, East African FX ended the month mixed. The gains in May were led by the Ugandan shilling (UGX), with the currency appreciating by 0.60% against the USD. Looking ahead, with external dynamics expected to remain favourable against expectations for hard currency inflows, the outlook for the UGX remains bullish. The UGX has strengthened by 3.00% since the start of the year to trade at levels last seen in 2016. 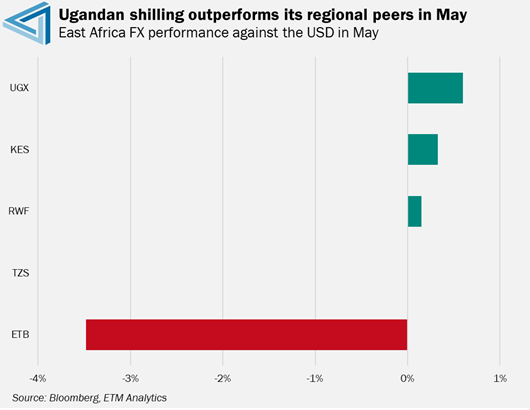 The second best-performing currency in the region last month was the Kenyan shilling (KES), which firmed by 0.33% against the USD. The bullish bias in the KES last month resulted from subdued dollar demand from importers, inflows from foreign investors and foreign currency earnings from the export of agriculture and horticulture products.

Unsurprising given the abundance of headwinds, the worst-performing East African currency in May was the Ethiopian birr (ETB), losing 3.48% against the USD. Underpinning the bearish bias in the ETB last was a combination of heightened fiscal and political risks and the announcement of economic sanctions from the US, which will have implications on loans from international lenders. Going forward, the outlook for the ETB remains decisively bearish with the USD-ETB expected to continue trending higher in the weeks ahead, despite expectations for sustained dollar weakness and an improvement in global risk appetite.

On the fiscal front, Kenya is back in the spotlight this week after lawmakers released a report on Monday stating that the East African nation is heading towards default unless the government revamps its debt. The parliamentary budget office said in a report released yesterday that Kenya’s debt servicing costs are projected to increase to a record KES 1.17trn in the financial year starting on July 1. Lawmakers noted that this is more than the KES 660bn that the government has set aside for spending on development projects. Kenyan lawmakers said in the report that the marked increase in debt repayments “indicates a growing level of fiscal inflexibility and therefore increased exposure to fiscal risks or debt default, in (the) absence of debt restructuring,” adding “that borrowing for development expenditure financing might no longer be a viable fiscal principle.” Lawmakers are not the only ones sounding the alarms over the risk of fiscal distress in Kenya. International lenders, including the International Monetary Fund, have said that Kenya may be at risk of debt distress.

The comments from the IMF came after the government said in its budget that it plans to borrow as much as $7.3bn in the international debt market over the next 2 years. Bloomberg meanwhile reported that by the 2024 financial year, Kenya’s debt servicing costs are expected to have more than doubled from 2020, with spending on development infrastructure remaining little changed. Borrowing is restricted to funding for development projects, according to Kenya’s public finance management rules. 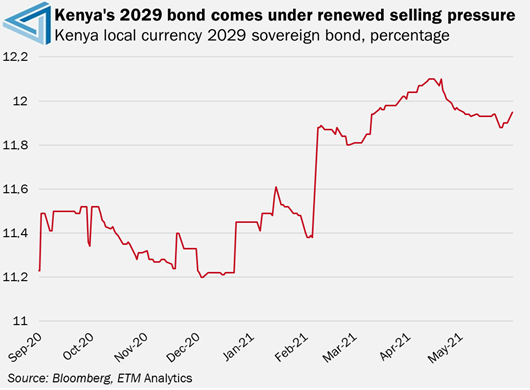 As is the case for many highly indebted African nations, the need for fiscal reform and a return to a path of fiscal consolidation in Kenya is urgent. The government should be looking at rolling reforms such as substituting borrowing with alternative financing such as public-private partnerships, particularly for large infrastructure expenditure, according to lawmakers. The fiscal warning from lawmakers on Monday triggered a fresh sell-off off in longer-dated Kenya bonds as investors demanded a greater fiscal premium for holding Kenyan sovereign debt. Moreover, it is worth pointing out that a significant degree of steepness remains baked into the Kenyan sovereign bond yield curve, reflecting the fiscal degradation that has materialised over the past year. Note that Kenya’s fiscal decline has been accentuated by the COVID-19 pandemic as the government ramped up spending and as the economic slump stifled revenue intake.