It has been a quiet start to the week in terms of economic data. Things however pick up from today.

Headline inflation in Tanzania came in unchanged from the previous month at 3.3% y/y in May.  Details from the CPI print showed that food and non-alcoholic prices increased to 4.9% y/y in May from 4.8% y/y in April. Although headline inflation has edged higher in recent months, CPI remains anchored well below the Bank of Tanzania’s 5.0% medium-term inflation target, which has now been the case for more than three years. The benign inflation environment provides room for the central bank to remain accommodative and support the economic recovery. 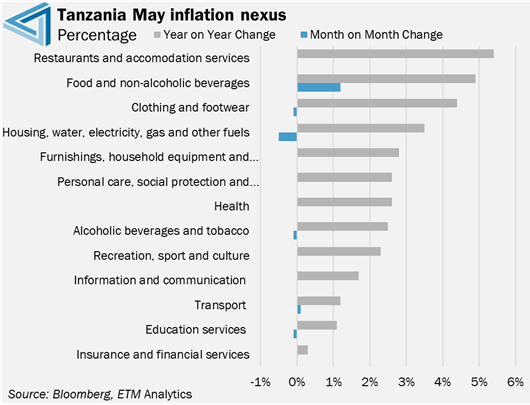 Thursday meanwhile will see the release of Rwanda’s May CPI report. Recall that annual inflation in Rwanda quickened for the second straight month in April. Consumer price inflation rose from 2.0% y/y in March to 2.4% y/y in April amid an increase in the cost of food and non-alcoholic beverages, alcoholic beverages and tobacco, clothing and footwear, education and transport. Meanwhile, a decline in costs of housing and utilities and miscellaneous goods and services partially offset this. Going forward, rising food prices and low base effects of fuel are likely to see annual inflation rise further. However, still weak domestic demand will help offset some of the topside inflationary pressures.

The main event this week will however be Uganda’s sovereign debt rating by S&P on Friday evening. At its previous rating update at the end of last year, S&P affirmed its 'B/B' foreign and local currency long- and short-term sovereign credit ratings on Uganda. The agency also decided to leave the outlook at stable on the back of Uganda’s high fiscal and external deficits, against its assumption that the country will maintain continuous access to financing on preferential terms. S&P said that it expects economic growth to rebound this year and over the medium term, supported by agriculture, trade resumption, and infrastructure investments linked to resource sectors. It is worth noting that near-term recovery hopes have been clouded by the reintroduction of virus containment measures over the weekend. Note that the government ordered schools and places of worship to close and restricted public transport between regions for six weeks to contain the spike in infections. The Ministry of Health said infection rates in Uganda climbed 26% since the start of May to more than 52.9k cases on Sunday, while deaths rose by 12% to 383 during the same period under review.

On the fiscal front, S&P said that it expects Uganda’s fiscal and external deficits to widen markedly. The agency said that funding for Uganda’s deficit, which has widened markedly amid the COVID-19 pandemic, remains reliant on financing from cheap official lending. S&P said that this should help insulate Uganda from changes in market conditions.

Heading into the sovereign credit rating, we are of the view that S&P will find comfort in the fact that Uganda has secured a 3-year financing package with the International Monetary Fund (IMF). The international lender said in a statement at the start of this month that it had reached an agreement with Ugandan authorities on a medium-term program that could be supported by IMF resources of about $1bn under the Extended Credit Facility (ECF). Note that the staff-level agreement is subject to IMF management approval and Executive Board consideration, which is expected in the coming weeks. The IMF said in its statement that “Uganda’s economy has been hit hard by the COVID-19 pandemic that eroded people’s livelihoods. Growth has halved compared to pre-crisis levels and poverty has increased, reversing decades-long gains in wealth creation and inclusion despite the support measures introduced by the authorities.” S&P said that the fiscal deficit has widened considerably, pushing public debt close to 50% of GDP by June 2021 and increasing financing costs.” Emergency financial assistance from the IMF and the World Bank helped close financing gaps and supported mitigation measures, but important fiscal and external financing needs remain over the next few years. On balance, we don’t expect to see a change in Uganda’s sovereign credit rating on Friday evening. That said, there is a risk though that the outlook could be changed from stable to negative given the fiscal degradation that has taken place over the past year.

This week will see both the Bank of China and the European Central Bank (ECB) meet to decide on their monetary policies. The latter, in particular, is unlikely to speak of tapering just yet. The economic recovery may be underway but is simply not strong enough. The economic recovery needs to gather momentum and fiscal reforms in key countries such as Italy implemented before the ECB can withdraw and feel like the recovery will be sustained.

The June ECB meeting is shaping up to be a big one, with the central bank likely to make a major announcement regarding its asset purchases. The governing council has been a bit mixed on its views of what should be done, but some recent widening of intra-euro-area spreads suggests that the doves will take the upper hand and announce an extension of the programme. The monthly rate of purchases will most likely be kept at 85bn EUR instead of declining back to levels seen in Q1. Forecasts will unlikely be changed too much, while the balance of risks will remain the same as seen at the previous meeting.

Global equities are finding support once again today, while US Treasuries are firming, suggesting that the market is being calmed by the Fed's constant assurances that any monetary policy tapering is still some way off. This dovish stance and the recovery for the global economy are supporting risk sentiment, and we should see this remain the theme going forward. There is, however, always the risk of some market volatility. Another period of this could be catalysed by the US CPI numbers out later this week, given the general focus on inflation.

In the currency market, no material change in the performance of the USD that remains largely rangebound for now. Most technical indicators are pointing to a loss of momentum, and without much in the way of data to respond to at the start of the week, USD traders are searching for inspiration or a catalyst of sorts to prompt some position taking. Some developments later this week in the form of the G7 meeting may hold some interest, although it is unclear what, if anything, will be taken from this event. For now, more range trading appears to be the order of the day. 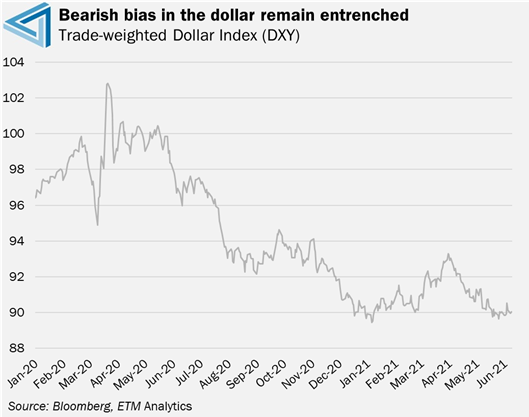 While emerging markets have benefitted from the persistent weakness in the USD dollar this year, East African currencies are mixed against the greenback on a year to date basis. The best performing currency in the region has been the Ugandan shilling (UGX), which has appreciated by 3.7% against the USD since the start of the year. While fiscal dynamics in Uganda have deteriorated markedly over the past year, fiscal dynamics and economic fundamentals in Uganda remain relatively sound when compared to other African countries. This together with elevated international gold and coffee prices, is helping underpin the performance of the UGX this year. 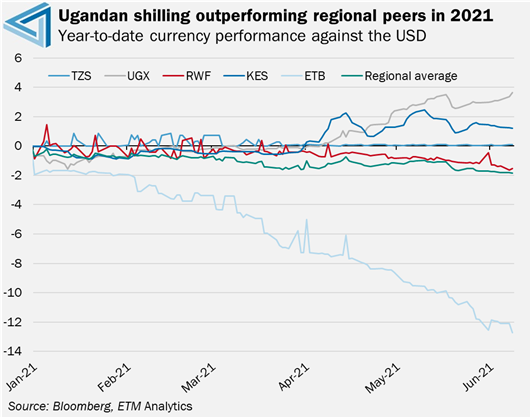 The worst performing currency in the region has been the Ethiopian birr (ETB), which has lost almost 13.0% against the USD since the start of the year. A number of factors including, heightened geopolitical tensions, political uncertainties and elevated fiscal concerns, are weighing on the ETB. As mentioned in recent commentary, the outlook for the ETB remains decisively bearish, with the USD-ETB expected to remain on its upward trajectory in the months ahead.

On the fiscal front, while we are likely to see investors turn slightly more cautious ahead of the big risk event in the form of the S&P rating update on Friday, we are likely to see the bullish bias in Ugandan bonds persist this week. Uganda’s 10yr bond yield has fallen sharply this month after the International Monetary Fund announced that it had agreed to a 3-year $1bn financing package with the Ugandan government. For context, Uganda’s 10yr yield has plunged 140bps since the start of the month to 14.23%. As mentioned above, the IMF deal has helped ease fiscal concerns and will be supportive of Ugandan assets going forward.