Gold has taken it on the chin over the past 24 hours as rising US Treasury yields dampened the appeal of the metal for short term speculators. The yields on 10yr US Tips turned positive for the first time in 2 years yesterday after trading as low as -1% as recently as March. This reversal has been driven by a hawkish Fed which has been steadfast in its message that it will raise rates swiftly to quell price pressures. This is certainly bearish for gold in the short term as it attracts no yield, but those seeking shelter from higher inflation dynamics globally will find refuge in the status of gold as a hedge.

Ethiopia: Data published on Tuesday confirmed that inflation pressures in Ethiopia remain robust. Headline inflation in Ethiopia accelerated to 34.70% y/y in March from 33.60% y/y in February. In addition to soaring international commodity prices, particularly food and oil, the sustained sell-off in the Ethiopian Birr would’ve added to the topside inflation pressures. Given the bearish outlook for the ETB and expectations for international commodity prices to remain elevated, we expect inflation in Ethiopia to remain buoyed in double-digit territory in the months ahead.

Africa: A report published by the African Private Equity and Venture Capital Association (AVCA) on Tuesday revealed that African start-ups attracted a record $5.2bn in venture capital inflows last year, nearly fives times higher than in 2020. According to the industry group, the bulk of the investor focus has been on fintech start-ups seeking to meet the needs of the continent's largely unbanked population. The financial sector accounted for 60% of the investments by value and nearly a third of deals by volume. Moreover, the report revealed that Nigeria was the leading destination for venture capital in Africa last year, surpassing South Africa. Lastly, AVCA said in its report that the majority of venture capital deals were concentrated in early-stage funding rounds. However, late-stage funding also rose sharply in 2021, including a nearly 40-fold increase in financing raised by Series C fundraising rounds.

Uganda: Investors continue to closely monitor trade dynamics to assess the net impact of heightened commodity prices on currency markets. Data released yesterday showed that Uganda’s trade deficit narrowed by 9% y/y to $247.4mn in February. A breakdown of the trade data revealed that exports rose to $337.3mn in February from $296.8mn in the previous month as coffee earnings increased. The Finance Ministry noted that Uganda exported at least 449k 60kg bags worth $72.2mn in February. Imports meanwhile rose 3% m/m to $584.9mn.

Kenya: Kenya’s government has announced a plan to lay 100k km of fibre optic infrastructure across the country to accelerate the pace of digital transformation. The Ministry of Information Communication and Technology said the fibre-optic cable would be deployed cover to 40,000 schools along with other learning institutions, 20,000 government institutions and 13,000 health facilities. Bloomberg reported that Telkom Kenya and PEACE Cable successfully landed the new undersea fibre cable to provide the most direct connectivity route from Asia and East Africa to Europe, as well as reduce communication delays between the continents.

Kenya: Kenya’s debut municipal bond by Laikipia is set to be floated by the end of June and has a tenor of seven years, according to Governor Ndiritu Muriithi. The issuance of the bond has been delayed to legal approvals but now has been given the green light. The country plans to raise KES 1.16bn from the issuance. The Governor noted that the bond would enjoy tax-free benefits similar to infrastructure bonds issued by the central government. This will set the standard for further municipal bond issuances going forward.

Zambia: The higher energy costs have caused policymakers across the globe to relook at how they are going to provide for their energy needs in decades to come. Zambia is acutely aware of the challenges that can be faced with the recent drought causing severe pressures on electricity supply and thus economic growth. Equally, now with oil prices holding north of $100/bbl, fuel prices continue to test new highs. It is thus not surprising to read in the LusakaTimes that Mongu Central Member of Parliament Oliver Amutike has called for an oil exploration in Western Province following the recent discovery of oil in Namibia.

South Africa: Eskom and its load-shedding have reared its ugly head again, and what started like another stage 2 inconvenience has graduated to something a little more serious as we moved to stage 4. Worse still, stage 6 has become a realistic possibility with the risk of 100 days of power cuts now deemed a scenario by Eskom. "Unplanned outages" is a phrase South Africans have become accustomed to, and this time around it has been the weather and insufficient maintenance that has been blamed.

Forex: Recovery in the Ugandan Shilling comes to a halt with the USD-UGX settling around the 3520 mark

While the Ugandan Shilling has asserted itself as one of the most resilient African currencies during the Covid era, it has been a relatively volatile start to the year. Recall that the Ugandan Shilling came under considerable selling pressure at the start of last month as external headwinds linked to Russia’s invasion of Ukraine intensified. However, the UGX has reversed most of its losses and is trading back at levels seen at the start of the Ukraine war.

While the recovery in the Ugandan Shilling appears to be moderating, with the USD-UGX settling around the 3520 mark, it must be noted that the UGX is amongst the top-performing African currencies this year, racking in gains of more than 1% against the USD. Moreover, it is worth pointing out that the Ugandan Shilling remains East Africa’s best performing currency this year. 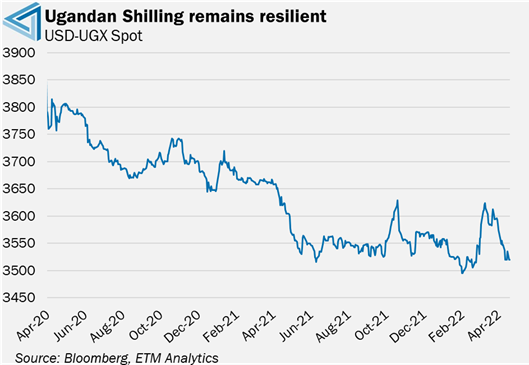 While the UGX remains particularly resilient compared to other African currencies, downside risks have intensified. One of the main risks is Uganda’s growing public debt pile. A report published by the Ministry of Finance showed that the government expects public debt to rise to almost 50% of GDP this year due to the increased borrowing to fund infrastructure projects. The Finance Ministry said that debt to GDP is expected to reach 51.30% of GDP in 2022 and 52% of GDP in 2023.

Looking ahead, although risks to the outlook for the UGX have intensified, we expect the resilience in the UGX to remain strong in the months ahead. The combination of solid exports, positive real interest rates and the country’s robust FX reserves position will continue to provide support for the currency. 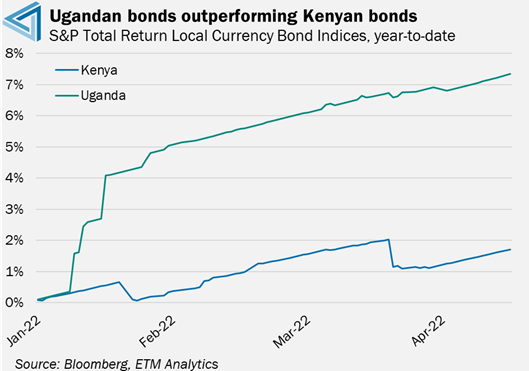 In terms of fiscal risk, both Kenya and Uganda are rated at B2u by Moody’s and therefore are arguably a highly comparable trade. It is worth noting that Kenya’s sovereign credit rating outlook is negative, while Uganda’s outlook is stable. ETM’s Fiscal Risk Model ranks  Kenya in “high fiscal risk” territory, while Uganda scores moderately in terms of fiscal risk. While the risk of Kenya slipping into a position of fiscal distress is high compared to Uganda, ETM’s Fiscal Risk model shows that Kenya’s fiscal risks, albeit acute, are easing.

Therefore, on a risk to reward basis, we continue to favour holding local currency Ugandan bonds over local currency Kenya bonds, especially as political uncertainty in Kenya intensifies ahead of the presidential election. Furthermore, foreign investors will take comfort in the fact that the Ugandan Shilling has proven to be notably more resilient than the Kenya Shilling to the unstable external conditions, limiting currency linked losses going forward.

Tuesday saw the release of the IMF’s April World Economic Outlook, which provided updated forecasts for a number of key macroeconomic and fiscal metrics. The above chart is a summary of some of the key African metrics which provide insight into the economic health and fiscal position of the respective countries.