Uganda: A positive story for the grim times

The note below was originally published as part of our IMF/World Bank Annual Meetings summary note on 27 October.

Uganda once again provided a rare glimmer of light in what was otherwise a grim series of meetings. Although the near-term growth projections in the WEO were revised slightly down and inflation revised slightly up, the forecast is still for robust growth of nearly 7% over the medium term and a convergence of inflation around the Bank of Uganda's (BoU) 5% target.

Indeed, Uganda’s 6.6% average growth projection from 2023-26 places it as the eighth highest among all EM, surpassed only by several African peers and Guyana. 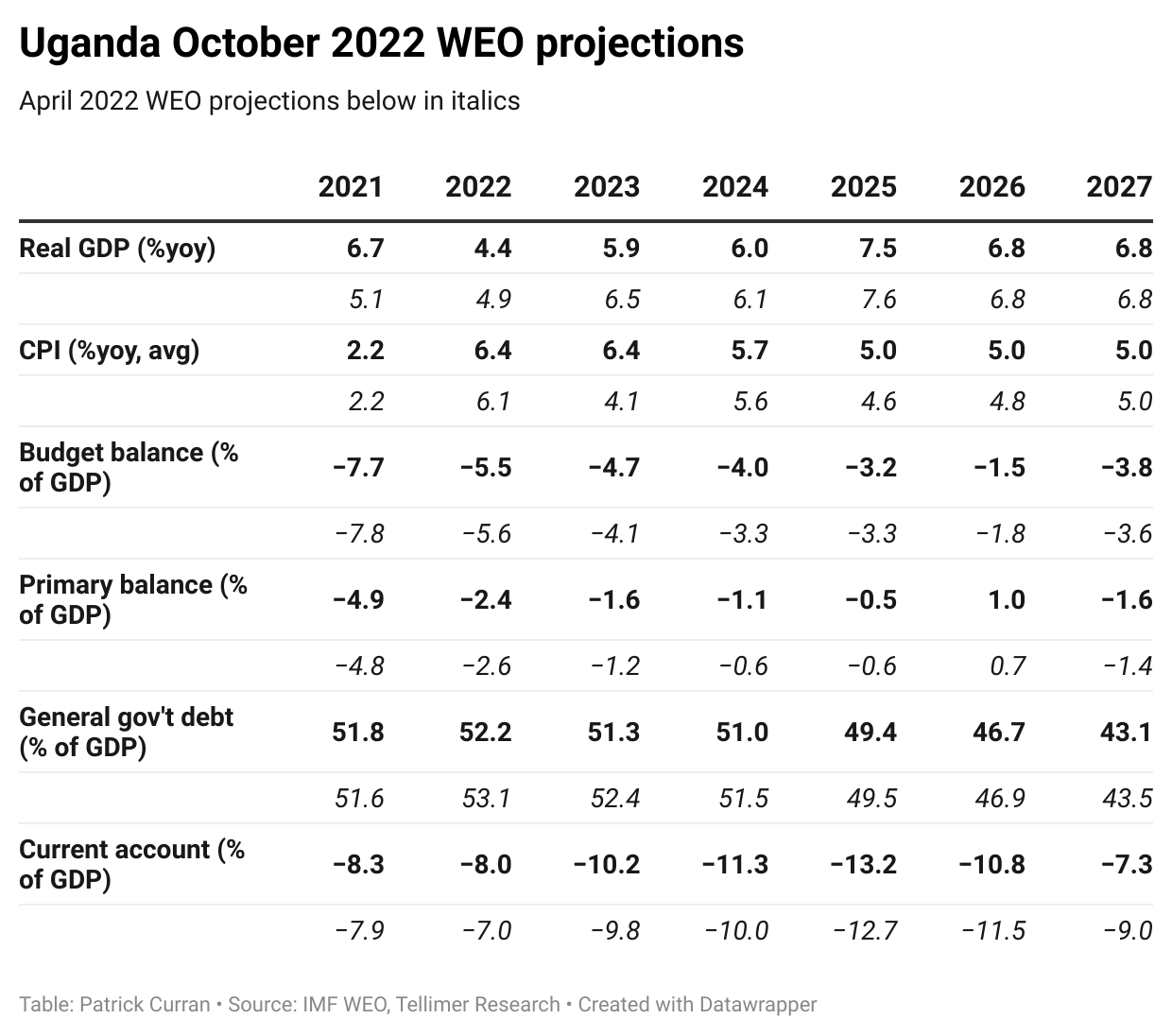 Lifting up the hood using official government data, the budget deficit came in at just 28% of what was anticipated in the first quarter of FY 22/23. However, this was driven by a sharp undershoot on capex, reaching just 42% of the target, while current expenditures reached 91% of target and revenue & grants reached 99%, pointing to a deterioration in budget composition. And, despite the low debt burden, interest payment absorbed over a quarter of government revenue in Q1 22/23.

Nonetheless, Uganda’s performance under the ECF has thus far been encouraging. Still, the second programme review, which was due at the end of June, has still not been completed, hinting at some slippage on the structural reform front. While we do not expect the ECF to fall off track, with the next review mission expected this month, this shows that it will not be all smooth sailing under the programme and that, setting aside the positive headline figures, reform implementation must be improved.

On the monetary policy front, the BoU has hiked by 350bps over the past five months to 10%, exactly in line with where inflation printed in September. While the 0% real policy rate is higher than the -2.4% median across our sample of 66 emerging markets, more hikes may be required amid continued tightening by developed market central banks. While real credit growth has declined into marginally negative territory, after averaging 7% in 2021, this is more likely evidence of fiscal crowd out than monetary tightening.

On the external front, the current account deficit is projected to widen from c10% of GDP this year to c13% by FY 24/25 on the back of oil investment, but the increase should be offset by FDI and the deficit is projected to moderate to c7% of GDP by FY 26/27 after oil production comes online. While production is expected to commence in the first half of 2024, there was some scepticism in our conversations about whether the projects would stay on schedule.

Although reserves have declined by cUS$500mn YTD, reaching US$3.8bn in August, they remain relatively healthy, at c4-4.5 months of imports. Further, the risk of capital flight has now decreased, with non-resident holdings of domestic debt falling from a peak of US$850mn in Q3 21 and US$770mn in Q1 22 to US$685mn in Q2 22 (90% of which is in longer-term bonds).

That said, the risk of UGX overvaluation is still very present, with the IMF estimating that the currency was modestly overvalued in 2021 (with an extremely wide -8% to +48% error band) and the currency appreciating by c25% in real effective terms since. As such, further UGX depreciation may be required if Uganda’s current account deficit remains wide to prevent a continued drawdown of reserves.

Nonetheless, we still think that local Ugandan debt is attractive, with limited beta to an EM asset class beset this year by declining risk sentiment and likely to remain under pressure amid an elevated risk of global recession and ongoing Fed rate hikes (with markets now pricing in a terminal rate of c5% in March 2023). As such, we retain our Buy recommendation on five- and 10-year government bonds.

Yields have ticked up since we initiated the recommendation a year ago, but we calculate a -6% total return over that period versus -14% for the Bloomberg EM Local Currency Index amid relatively stable UGX and high nominal yields, while yields of c17.5% now on the UGANGB 17 04/03/2031s make for an even more attractive starting point. 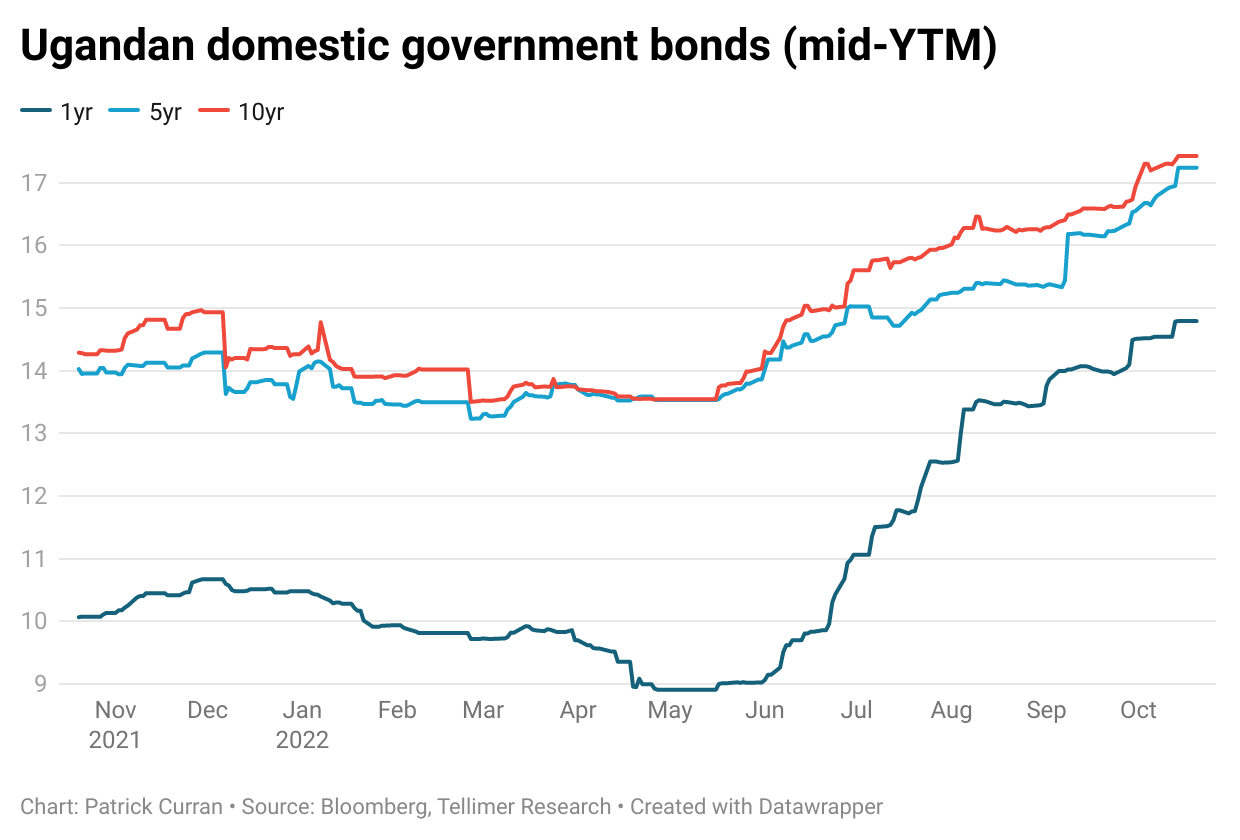