The volatile lira rally continues, with the TRY now up by c45% from last Friday's low at the time of writing (though it is still down c34% ytd) and 1-month implied USD/TRY volatility rising to an all-time high of 81.9% (versus a previous high of 61.5% in August 2018). The key driver has been the government's new measures to protect lira time deposits from currency depreciation in excess of the interest rate, effectively providing a free hedge for Turkish savers against excessive TRY depreciation. 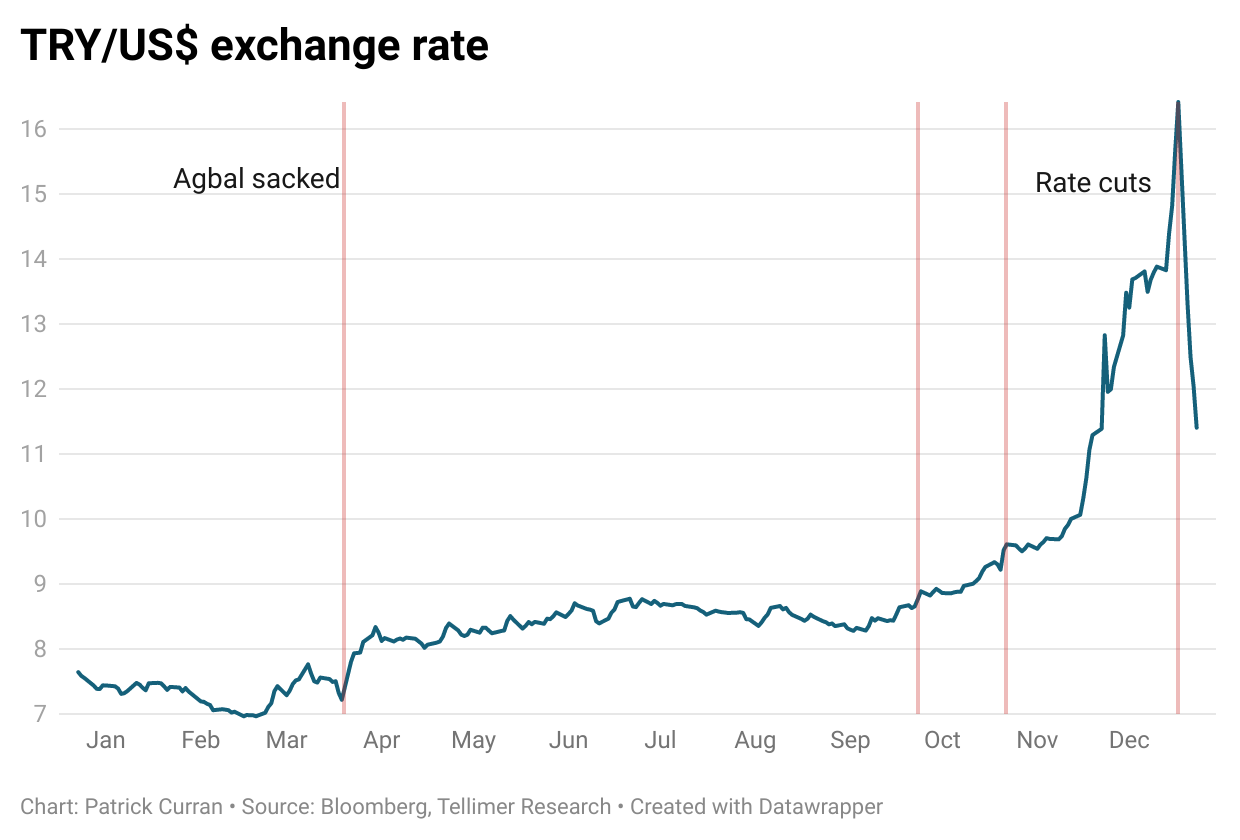 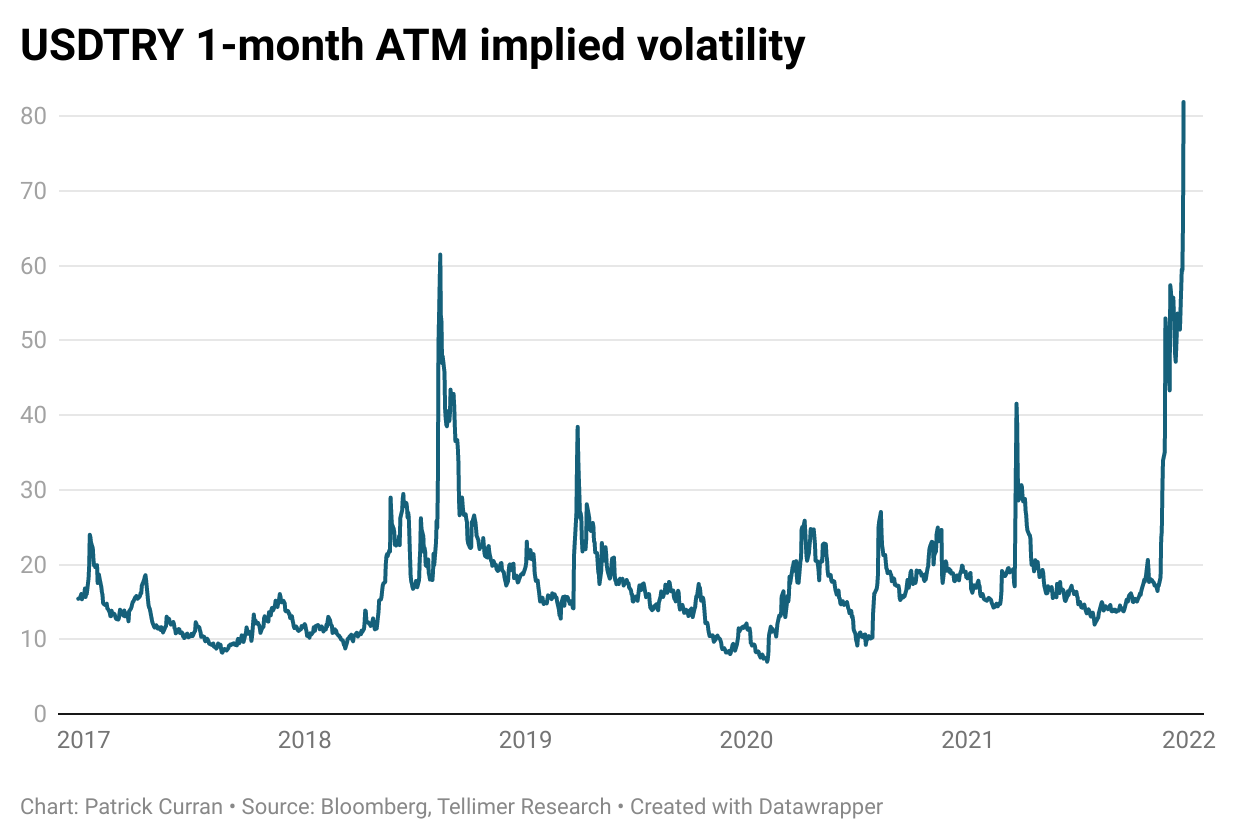 However, another key driver has been direct intervention by the CBRT, with a report by opposition party CHP alleging that the central bank sold US$6.1bn of FX in defence of the lira in five separate interventions from 1-17 December, in addition to US$392mn in forward transactions. Interventions have come at the cost of reserves, with the CBRT’s official net reserve figure falling from US$32.2bn at the end of October to US$21bn on 10 December and further to just US$11.3bn on 17 December. 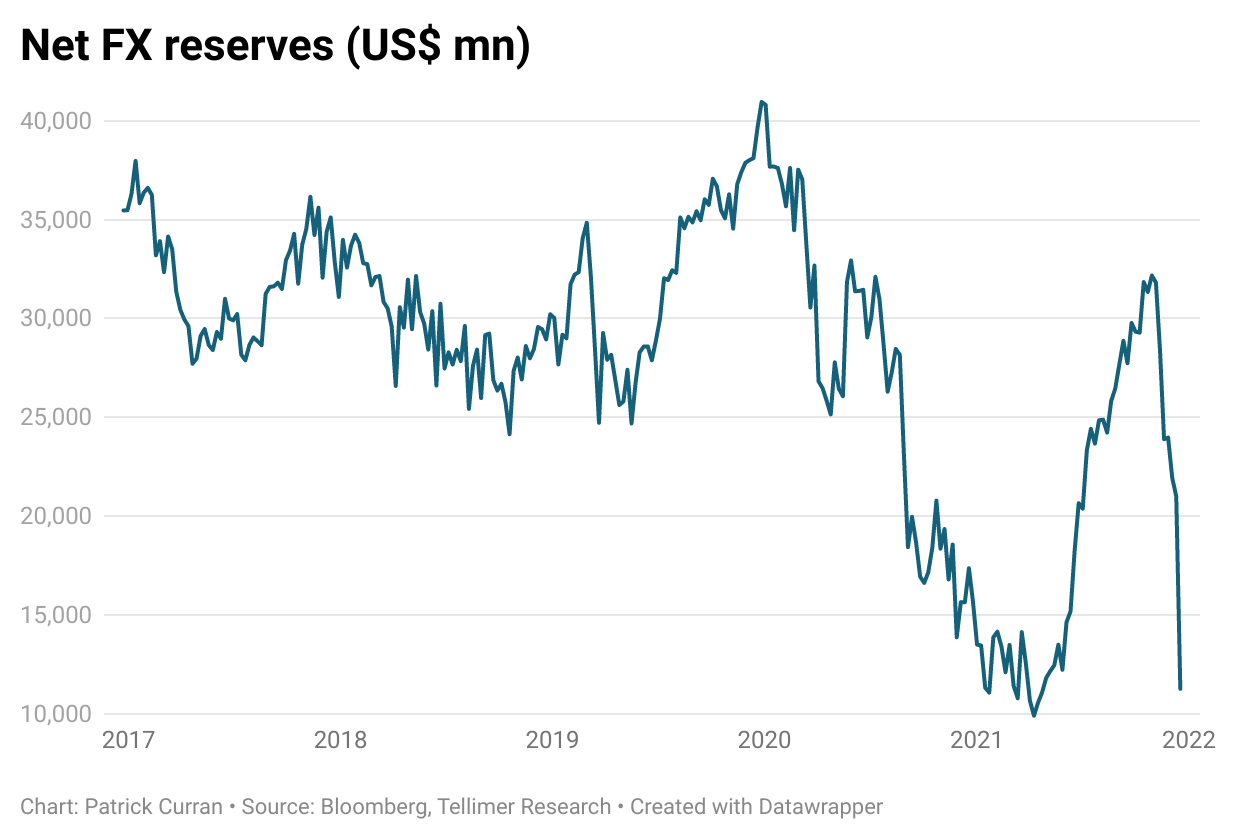 With over US$170bn of short-term external debt (albeit just US$35bn of which is owed by the public sector), further interventions are clearly unsustainable if the TRY comes back under pressure. Factoring in the massive US$63bn stock of FX swaps and forwards, actual net reserves fall to a record-low of negative US$52bn. While plans to secure further swap lines from Azerbaijan and the UAE could help boost Turkey's gross reserve position, it won't improve the underlying reserve weakness. 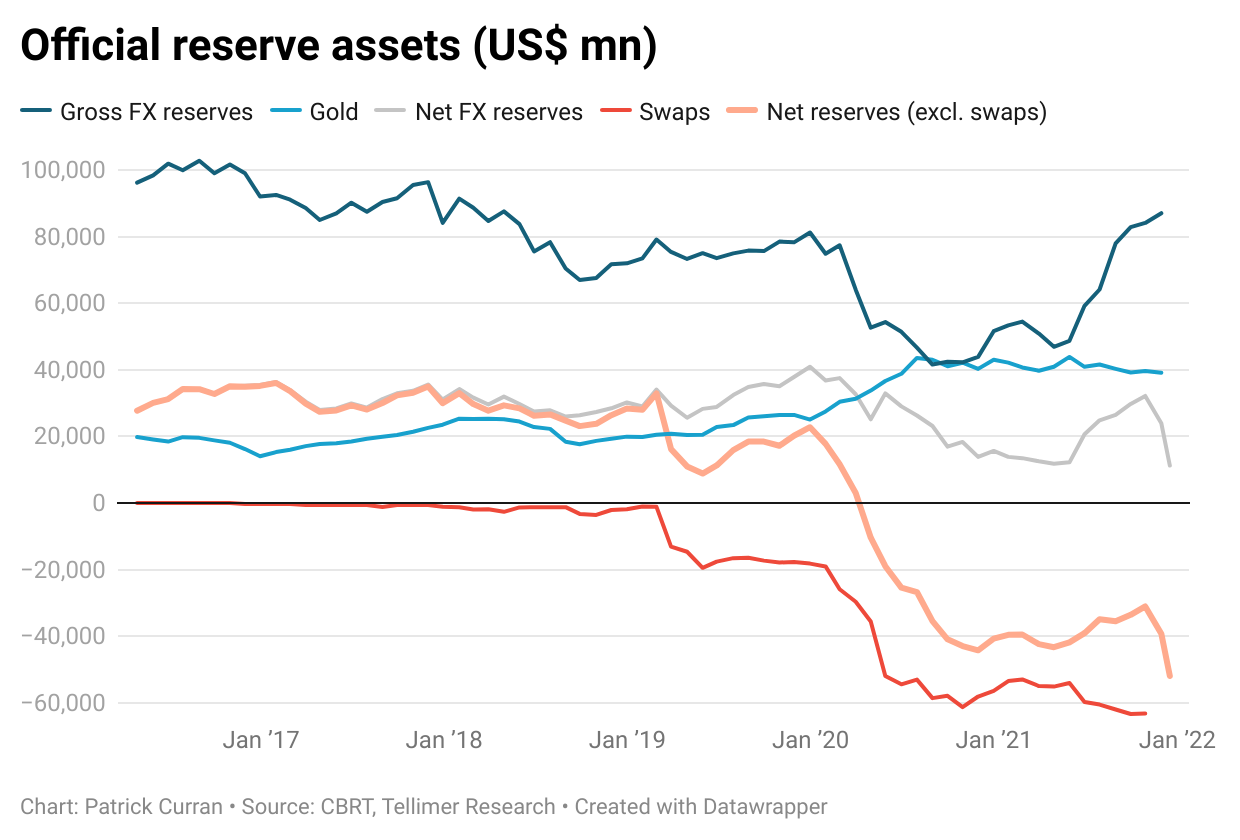 Against this backdrop, it becomes clear just how important it is for President Erdogan's new lira defense strategy to work. As long as the policy continues to support the lira, it could provide some space for the CBRT to build its reserves and tame spiralling inflation. However, if the lira comes back under pressure, it could trigger a vicious cycle. If the government funds the compensation on the budget, it could lead to a spike in spending that undermines one of the key bastions of strength for Turkey’s credit profile.

Revaluation effects have caused dollarisation of resident deposits to rise from 54% to 66% in recent weeks, with US$220bn of FX-denominated resident deposits in the banking system. If half of these flow into 3-12 month time deposits to take advantage of the new scheme, this would impose a direct cost of US$11bn (cTRY 125bn or c2% of GDP at the current exchange rate) for every 10% of TRY depreciation above the rate offered by banks on time deposits (which is linked to the CBRT’s 15% policy rate).

However, in practice, it is more likely that the compensation is monetised, with the CBRT already saying that it will bear the cost of the new policy. This means that excessive lira depreciation would likely cause a vicious cycle where the CBRT prints liras to offset depositors' losses, leading to further currency depreciation and pass-through to inflation, further de-anchoring inflation expectations and eventually either forcing the CBRT to abandon the policy or enter a self-perpetuating inflationary spiral.

So, while the new lira defence measures have offered temporary reprieve, the policy is unlikely to be sustainable without a credible tightening of monetary policy, and could backfire spectacularly if lira depreciation resumes. This week's rally provides a strong base on which future compensation will be calculated, increasing the risk that future depreciation is enough to trigger payments by the CBRT (even the reversal of just half of this week's gains would be sufficient).

It is also not clear how much of this week's rally can be attributed to the new policy versus reversal of previous overshooting, a covering of short TRY positions, and CBRT intervention. If it is simply a reversion to a more fundamentally-driven value after excessive TRY depreciation, then the risk of renewed depreciation is lower. However, if it has been driven by more temporary factors like CBRT intervention and covering of short positions, then it could quickly reverse.

While the near-term direction of the lira is unclear (as the spectacular volatility of recent months has dramatically illustrated), we think the ongoing drop in reserves and the asymmetric downside risks introduced by the new lira defence measures paint a worrying picture. The new policies and CBRT interventions could offer temporary reprieve, but without a more orthodox monetary policy tightening it is unlikely to be sustained, and if TRY depreciation resumes it could quickly spiral out of control. We retain our Sell recommendation on the TRY at the new rate of c11.3/US$.