The CBRT decided to cut its repo rate by another 100bps, in line with the expectations of 14 of the 22 analysts surveyed by Bloomberg (one expected a hold and the rest expected cuts of varying sizes). This takes the cumulative cuts since September to 500bps, even as most of the rest of the EM universe is embarking on tightening cycles. Along with the recent rise in inflation, this takes the repo rate even deeper into negative territory, reaching -7.3%. 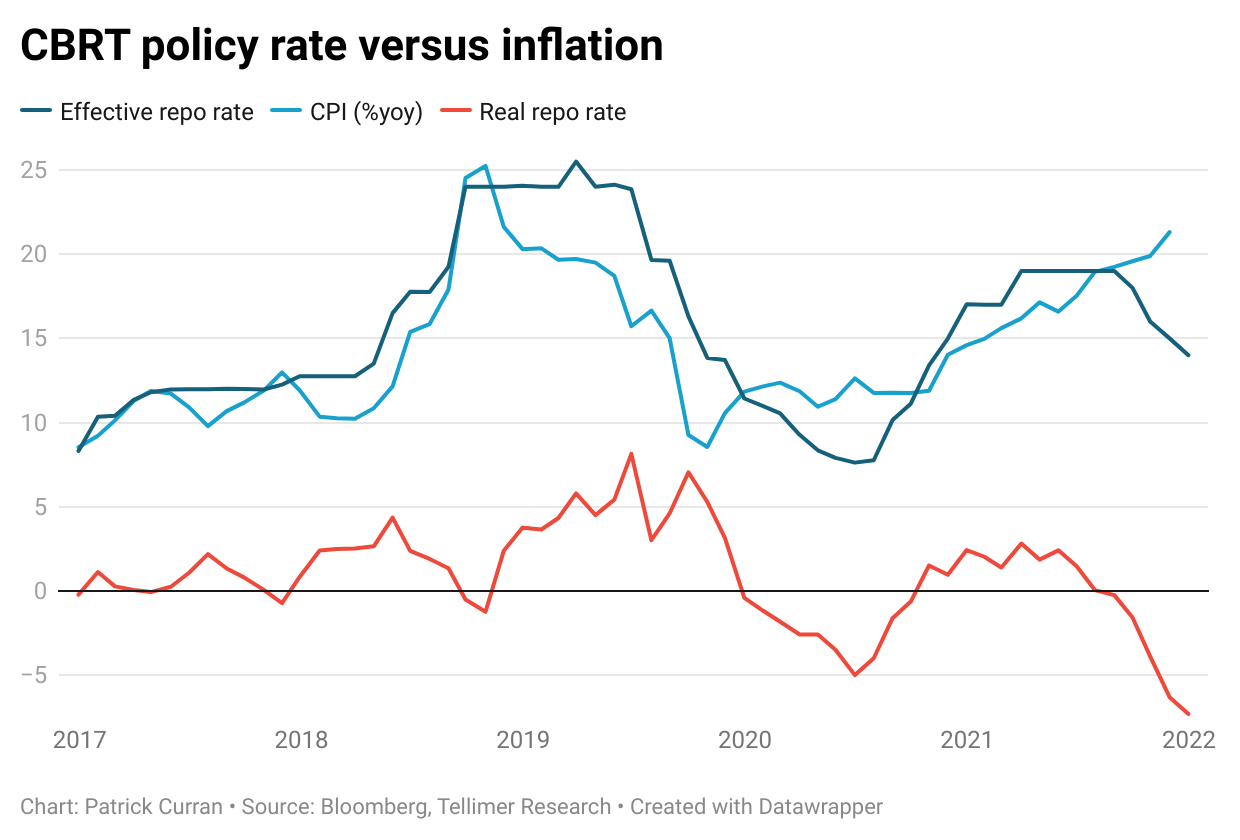 The statement implies a pause to the easing cycle in Q1 22, saying "The Committee decided to complete the use of the limited room implied by transitory effects of supply-side factors and other factors beyond monetary policy's control" and that "recent policy decisions will be monitored in the first quarter of 2022".

This may grant some temporary relief for the TRY after its eye-watering collapse this year. However, President Erdogan has made it clear that rate hikes are off the table, continuing to vocally defend his anti-interest stance in recent weeks. New finance minister and Erdogan acolyte Nureddin Nebati also added his voice to the fray, saying earlier in the week that "We won't raise the interest rate."

Despite being in line with expectations that have been well-entrenched for the past month or so, the TRY has continued to sell off, falling by over 5% on the day at the time of writing to over 15.5/US$. This takes the drop to over 12% on the week, 38% since the end of October, and 52% ytd. 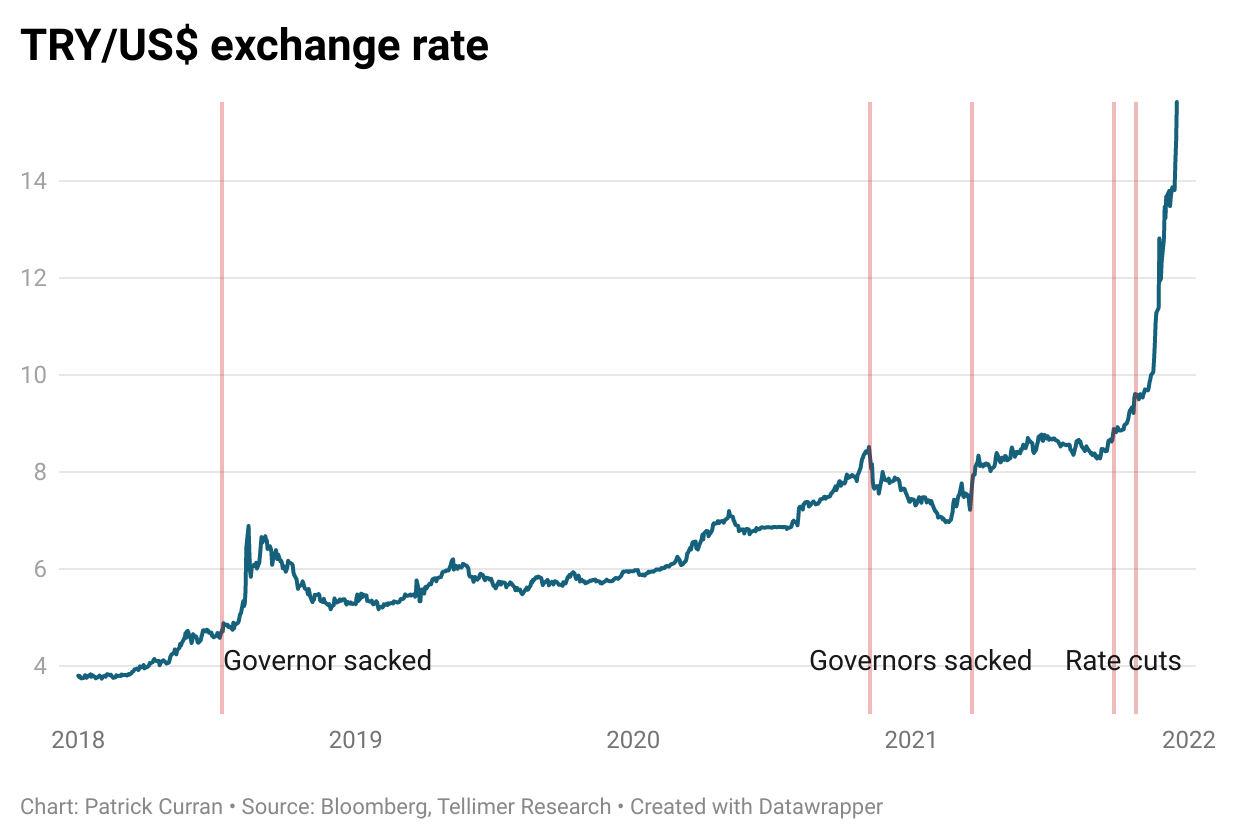 The CBRT has responded by reviving their FX interventions after a year-long hiatus, citing "unhealthy price formations." It has now sold FX to the market four times this month with limited impact on the TRY. This is the very same policy that famously resulted in the CBRT burning an estimated cUS$100-165bn of reserves from 2018-20 in defence of the TRY.

While FX interventions may have merit when it comes to smoothing volatility, it simply amounts to putting good money after bad when done in defence of a highly liquid and precipitously falling currency, and will prove similarly inefficacious this time around. And with net reserves dropping by US$11bn since the end of October, it could also unwind Turkey's recent reserve building success. 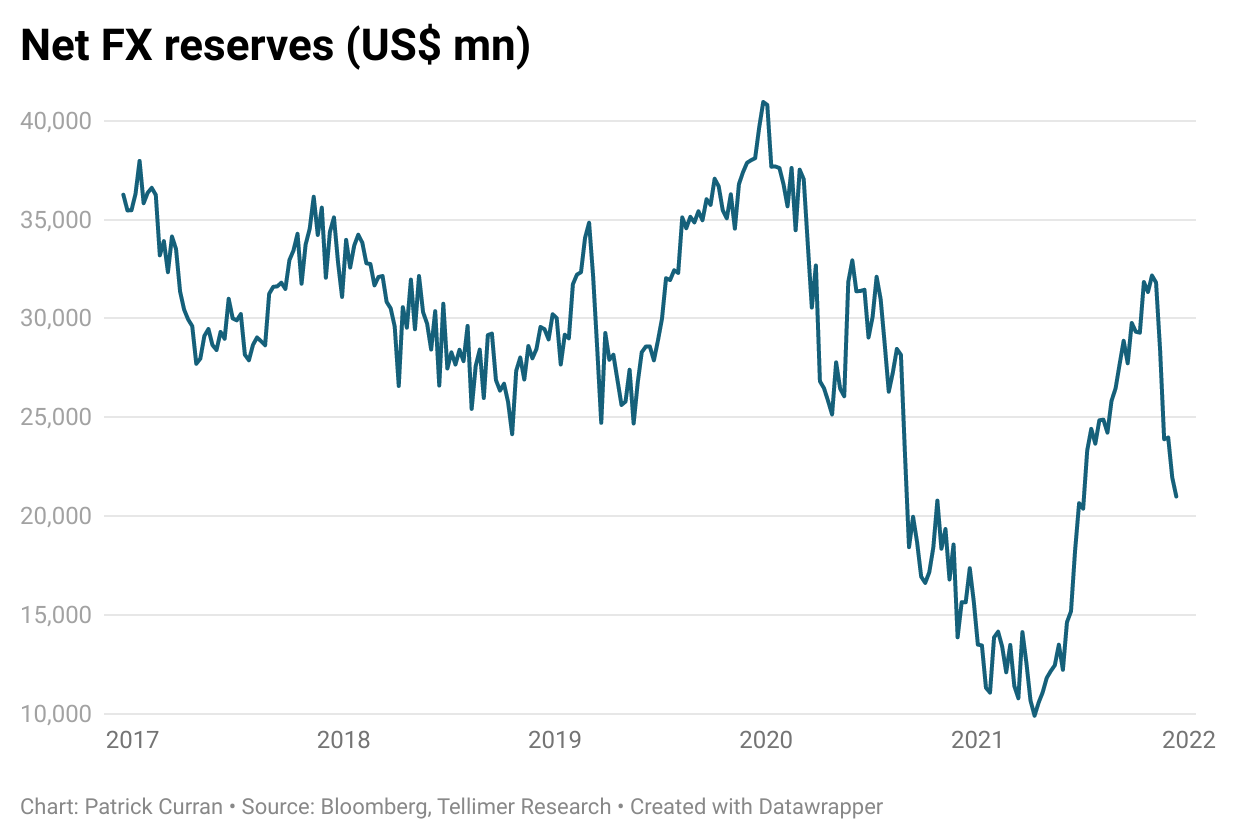 President Erdogan has also turned to other unorthodox measures to stem the falling TRY and rising inflation, citing potential swap deals with central banks (which would add to the existing US$63bn stock built up since 2019 in defence of the TRY), threatening massive fines for manufacturers and retailers hoarding goods, extending the tax advantage on TRY deposit accounts by three months to end-March, and urging Turks to invest their FX and gold savings in the economy to support "low rates, balanced FX levels".

However, without a reversal of the CBRT's rate cuts, the TRY is likely to keep falling. Currency depreciation has fed through to higher inflation and caused inflation expectations to become thoroughly unanchored, initiating a vicious and self-perpetuating cycle of currency depreciation and price increases that will be difficult to reverse without installing a credible and independent central bank governor that is willing to stand up to Erdogan and pursue a sustained tightening of monetary policy.

While it is increasingly likely that Erdogan will opt to pin the blame on CBRT Governor Sahap Kavcioglu and sack him (with Erdogan already firing three Governors since mid-2019 and six MPC members since March), it is more likely that he will be replaced with another Erdogan acolyte rather than a credible and independent candidate like we saw last November. With Erdogan seemingly becoming more entrenched in his anti-interest rate stance the longer the currency crisis lasts, Turkey could be beyond the point of no return. As long as Erdogan is in power, it will be impossible for the CBRT to build credibility.

No telling where the lira is headed

This week's sell-off looks like another overreaction, with the TRY depreciating in anticipation of the CBRT doing what markets have long expected them to and then selling off even more when they actually do it. There is no new information content from today's statement, yet the collapse continues.

At this point, the TRY is totally disconnected from fundamentals. It has depreciated by 20% in real effective terms through November relative to the 2020 average, a level which the IMF estimated to be 20% overvalued. This is despite the current account recording a surplus for three consecutive months on a strong recovery in tourism and the deficit narrowing by US$20bn over the first 10 months of the year relative to the same period in 2020, which would normally point to a fundamental appreciation. 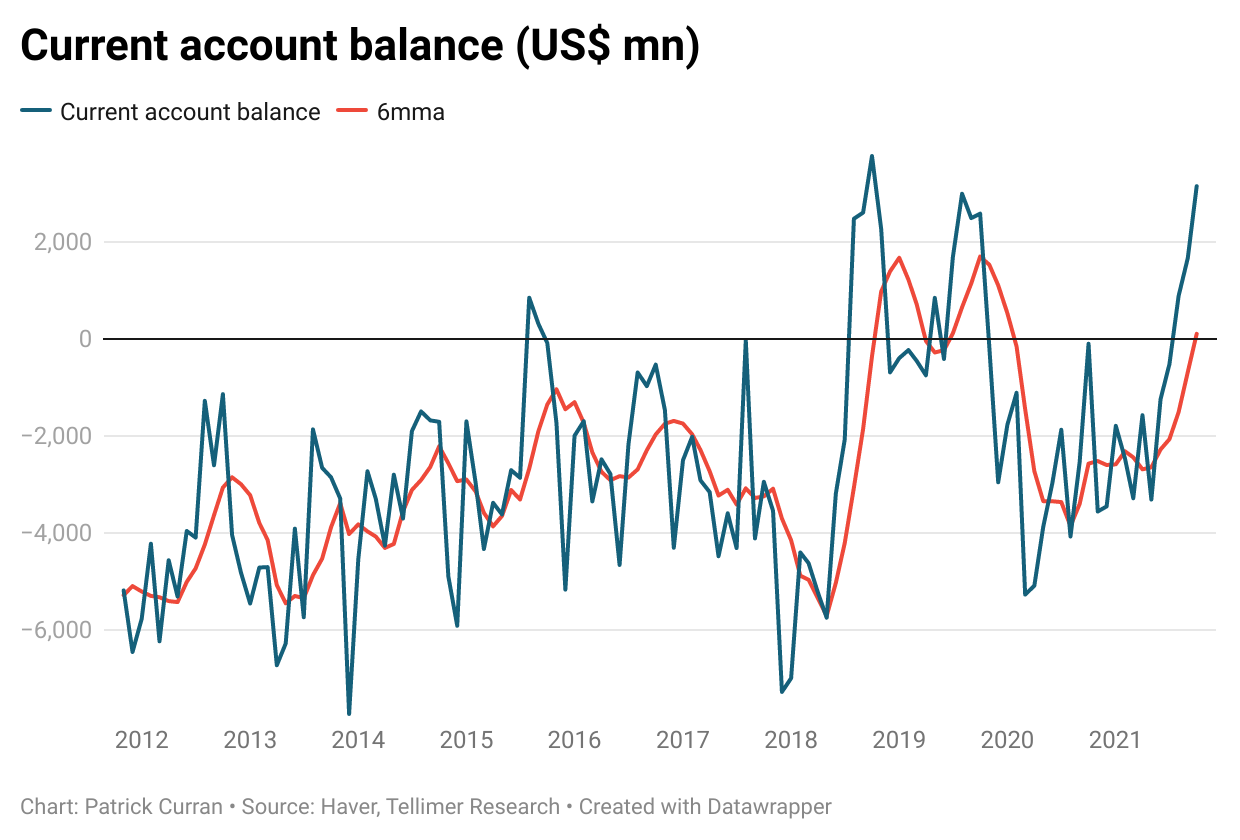 That said, a current account surplus is not enough to assure TRY stability if there is a bona fide crisis of confidence in the TRY, potentially leading to increased dollarisation, flight of deposits from the banking system (as we saw in 2018), and a surge in gold imports (as we saw in 2020) as residents stash money under their mattresses and hedge against further TRY depreciation. Even with limited foreign outflows (which have been flat in recent months given the limited stock left in the country), this could keep pressure on the currency despite underlying BOP improvements.

Truly, a healthy dose of humility is required here. This analyst must begrudgingly refer to our Buy recommendation on the TRY at the beginning of the year, before the latest leadership reshuffle and policy shift at the CBRT. While the policy backdrop back then was world's away from today (even if the risk of political meddling was still omnipresent), if we liked the TRY below 7.5/US$ then surely it must look like a screaming bargain above 15.5/US$, no?

Alas, we are still not ready to catch the falling knife. As long as Erdogan is at the helm there is nothing to prevent the TRY from continuing to depreciate. Setting fundamentals aside, our machine learning model projects a continued drop to c17.25/US$ by mid-2022 before the TRY begins to claw back its losses in the second half of the year. This could indeed be a sounder framework for analysis of a currency that is being driven by momentum, animal spirits, and the whims of an economically illiterate president.

Perhaps in a post-Erdogan world, the TRY could begin to swiftly claw back its eye-watering losses of recent years. And it is certainly true that the currency collapse and inflation spike have raised the risk of his demise in the general elections scheduled for mid-2023, with the Turks increasingly airing their grievances on social media about daily price increases at supermarkets, bread lines growing in length at the government’s subsidized kiosks, and the opposition mobilising behind the narrative that Erdogan is to blame for the economic malaise.

While Erdogan's approval rate is hovering around a near-record low of 39% in a November survey by Metropoll and a majority of opinion polls showing that the opposition is primed to beat Erdogan in the 2023 elections, Erdogan will likely use all the tools at his disposal to maintain his control of the country and, in any case, 2023 is a long time to wait for salvation when the currency is dropping at a pace of over 50% per year.

For now, we retain our Sell recommendation on the TRY and local debt heading into thin holiday trading, with Erdogan's stubborn insistence on low rates exacerbating the risk of a full-blown crisis of confidence in the currency and negative sentiment likely to continue dominating fundamental factors for the foreseeable future.