Today, the Turkish central bank (CBRT) held its one-week repo rate at 14%, in line with the expectation of all 21 analysts surveyed by Bloomberg. The decision came despite inflation rising further from 49% to 54% yoy in February (core from 40% to 44% yoy), pushing the real policy rate to -40%. It also came as the Fed hiked rates yesterday, leaving Turkey even further behind the curve amid tightening global financial conditions and ongoing hiking cycles at other major EM central banks. 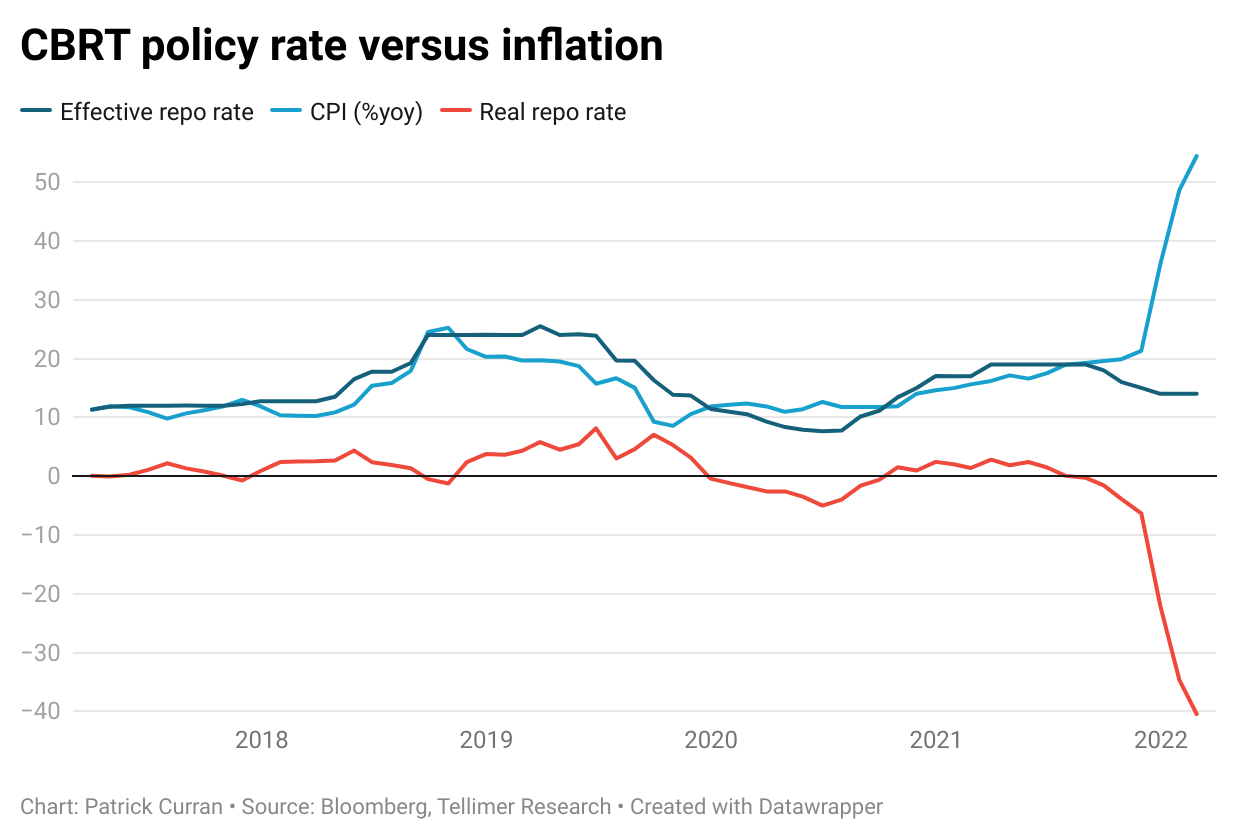 In justifying the decision, the statement said that the rise in inflation was driven by commodity prices, supply side factors, and "temporary price formations that are not supported by economic fundamentals", saying that it expects the disinflation process to begin on the back of base effects and measures already taken (like the liraisation strategy, which will continue to be a key policy focus, with FX-protected deposits reaching TRY557bn, or US$38bn, from TRY313bn in early February).

In addition to pushing up inflation, the Russia-Ukraine war is likely to weigh on Turkey's current account due to rising fuel and food prices and lower tourism arrivals. Turkey imported US$50bn of fuel in 2021 and US$1.9bn worth of wheat from Russia and Ukraine in 2020 (second only to Egypt's US$2.4bn), while tourist arrivals had recovered to 70% of pre-Covid levels last year but will take a hit given c20% of arrivals were from Russia and Ukraine.

President Erdogan has said that the government will look into supply side policies to contain food and fuel prices without compromising fiscal discipline (including the extension of the temporary VAT cut on food through the end of March, holding natural gas prices steady in March for households and industry, and today's announcement of the imposition of electricity price caps), but this will be insufficient to tame rising price pressures and will weigh on the budget.

Even before the Russia-Ukraine conflict, there was evidence of rising price pressures across a variety of signals, with growth in monetary aggregates, private sector credit, property prices, producer prices and wages all rising sharply in recent months. Meanwhile, after moderating slightly in February, inflation expectations rose in March on the back of the conflict and remain thoroughly unanchored from the CBRT's 5% target. 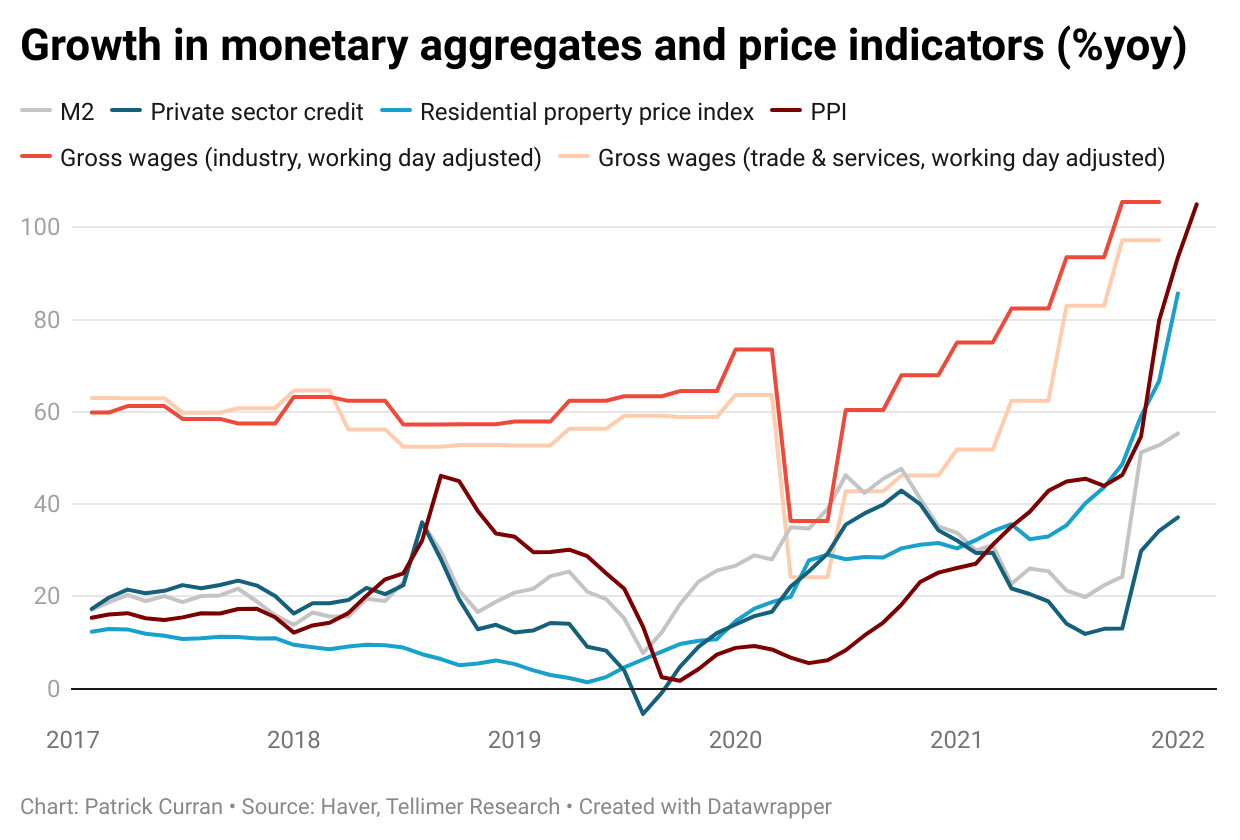 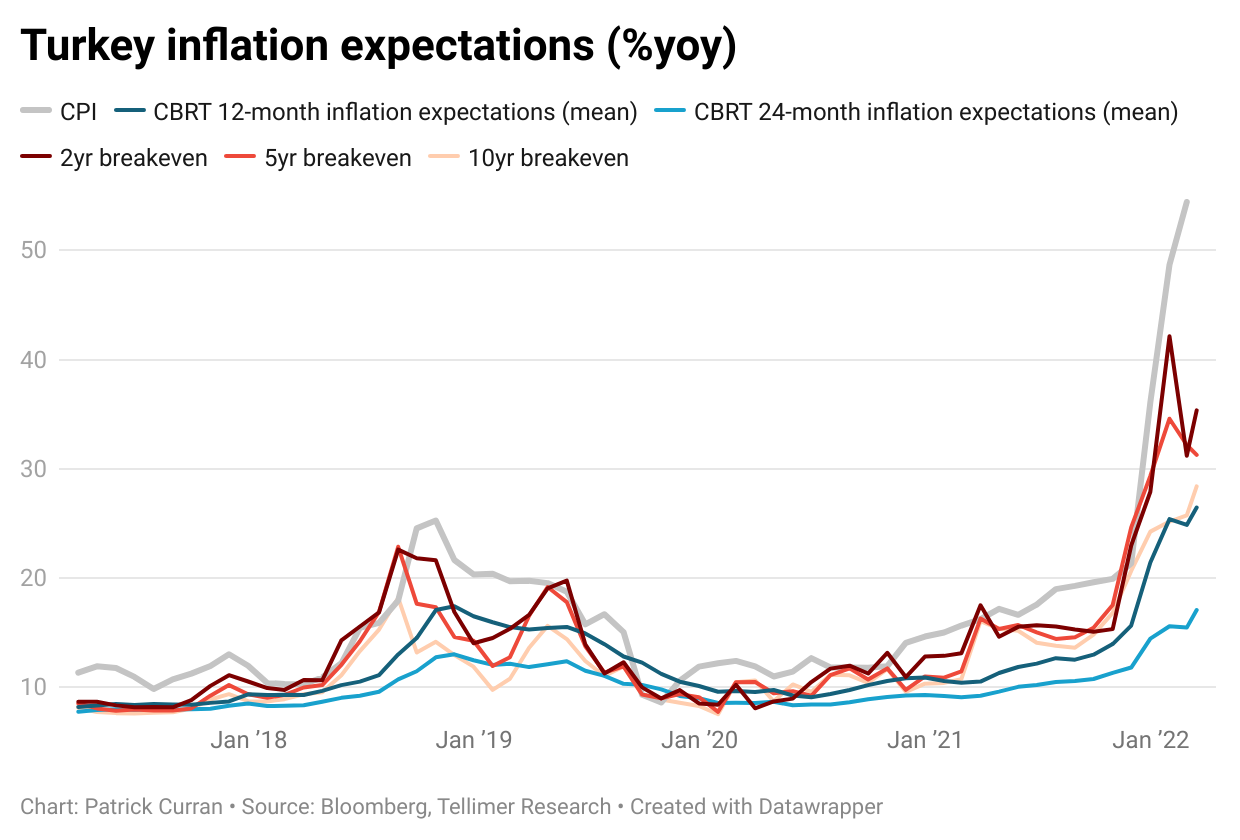 Current account pressures also predate the Russia-Ukraine conflict, with the current account widening sharply in January on the back of rising energy prices. The preliminary trade deficit widened another 142% yoy in February to US$8.1bn on a 25% yoy rise in exports versus a 46% rise in imports, while the CBRT has removed its previous prediction for a current account surplus this year from the MPC statement. 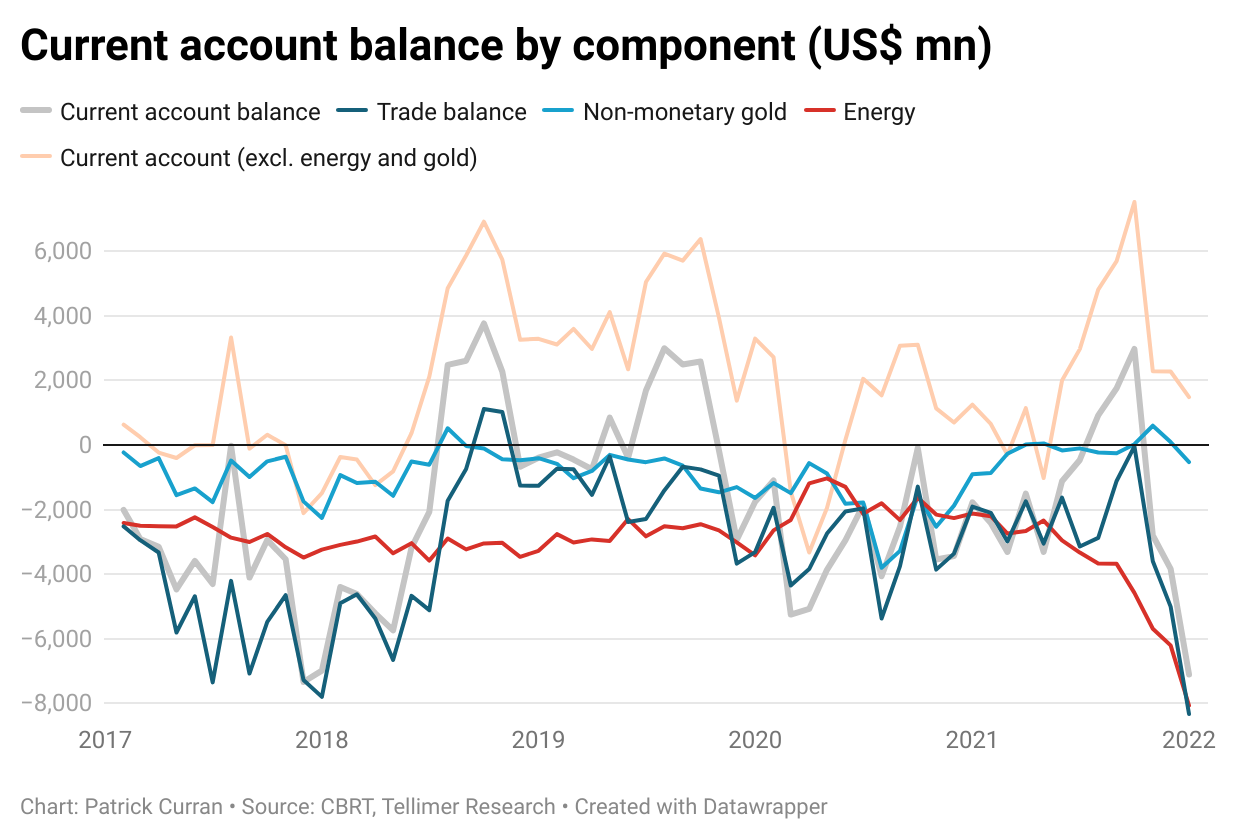 After a brief period of stability, the lira has now fallen by 9.8% ytd versus 1.8% for the JP Morgan EM Currency Index despite state banks reportedly selling another US$4bn of FX in late February to support the currency (adding to US$7.3bn of CBRT intervention in December). Rising global risk aversion has also led to US$1.4bn of non-resident capital outflows (split roughly equally between equity and domestic government debt) in the three weeks following Russia's invasion. 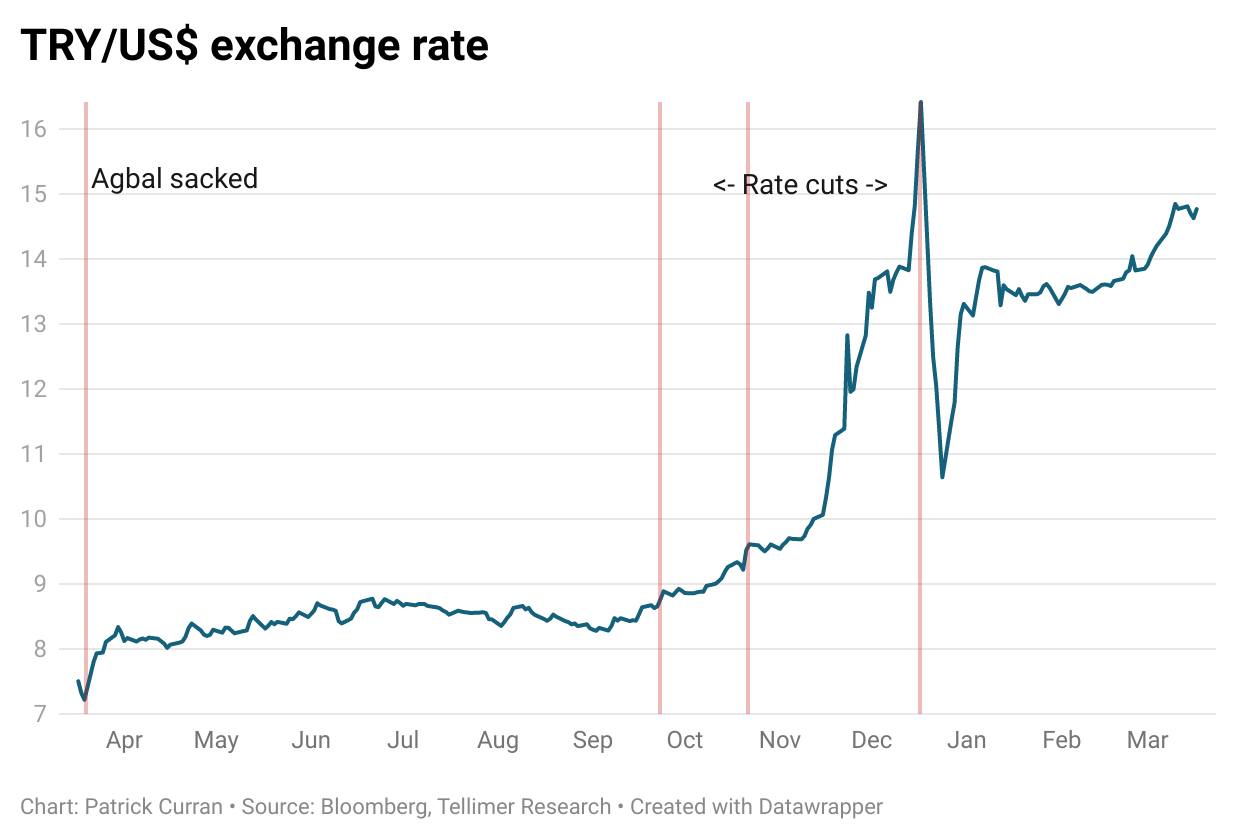 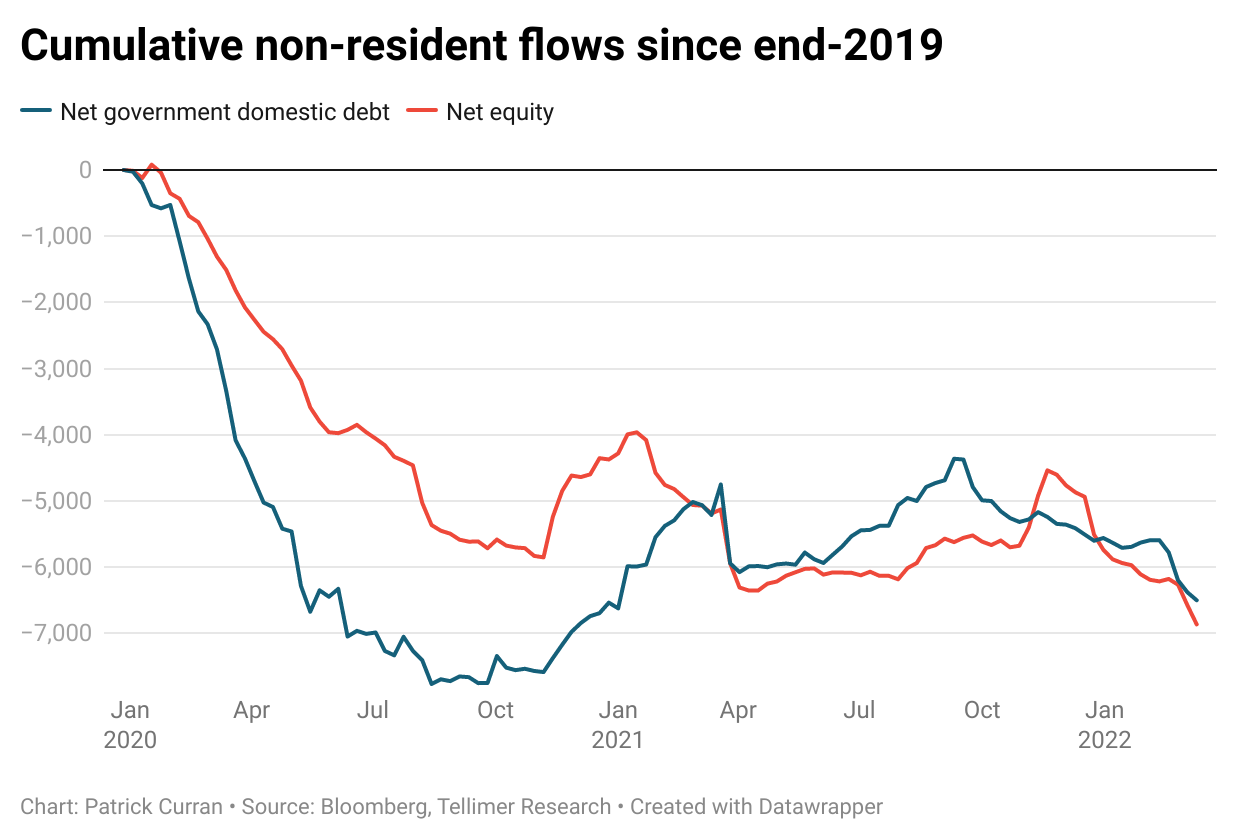 As one of the emerging market economies most impacted by Russia's invasion of Ukraine, the lira will likely continue to underperform without a sharp tightening of the monetary policy stance to take real rates into positive territory on a forward-looking basis and prevent inflation expectations from being anchored at a permanently high, double-digit level. And, as we have previously highlighted (here and here), the CBRT’s liraisation strategy could backfire if lira depreciation continues at the current pace.

Inflation has become a major political problem for President Erdogan, with recent protests against the rising cost of living, a Metropoll study in February showing that 72% of people are unhappy with living conditions and that support for the ruling AKP has dropped to just 25%, and six opposition parties recently signing an accord to move away from an executive presidency headed by Erdogan to a "strengthened parliamentary system".

Still, Erdogan and the CBRT seem resolute in their aversion to rate hikes. Against this backdrop, the disinflation process is likely to be slow and painful. It is unclear if rising political pressure and the deteriorating inflation and current account outlook will be sufficient to prompt a policy reversal. But without a bona fide currency or balance of payments crisis, we think such a shift is unlikely, and any tightening would more likely rely on unconventional methods rather than direct rate hikes.

Against this backdrop, we maintain our Sell recommendation on the TRY and TRY-denominated government debt.