Turkey: The calm before the storm

Turkey's central bank (CBRT) held its policy rate at 14% today, in line with the expectations of all 22 analysts surveyed by Bloomberg. The decision to hold comes despite a sharp rise in inflation to nearly 49% yoy in January, pushing the real repo rate to -35%. 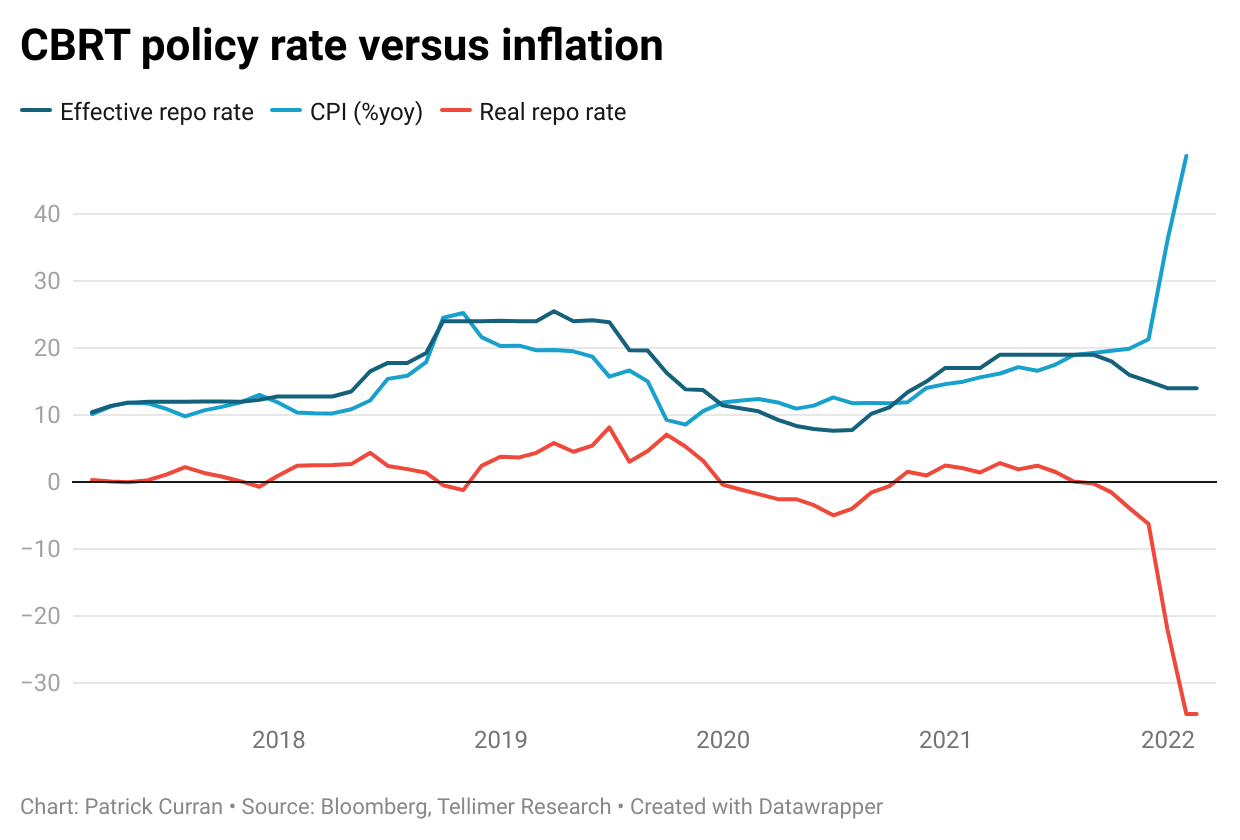 The CBRT justified the decision by saying that the "increase in inflation in the recent period has been driven by pricing formations that are not supported by economic fundamentals," pointing to supply side factors and rising food and commodity prices. It expects the disinflation process to start soon on favourable base effects and the unwinding of transitory factors, with a year-end forecast of 18.6-27.8% (23.2% mid-point versus a 34.1% year-end expectation from the CBRT's February survey) and an end-2023 forecast of 3.4-13% (8.2% mid-point versus a 15.4% 24-month expectation from the CBRT survey). 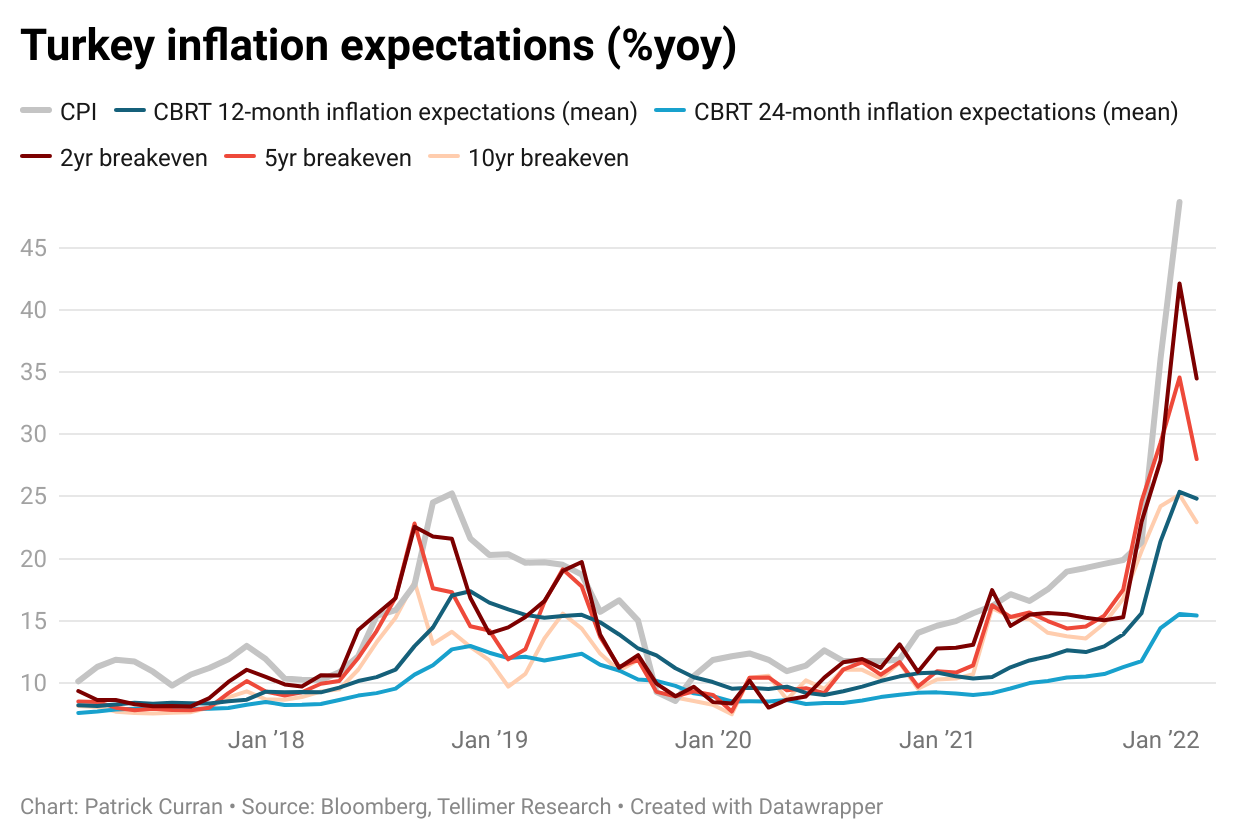 While unsurprising, the decision to hold rates in the face of ballooning inflation and the CBRT's estimated c3% output gap will slow the disinflation process and further anchor inflation expectations well above the CBRT's 5% target. Rather than using monetary policy to control runaway inflation, the government has announced several new measures that include a reduction of VAT on staple foods to 1% from 8%, the creation of a task force to inspect prices and a mobile app to help citizens find the cheapest goods, and a new TRY60bn (US$4.5bn) Credit Guarantee Fund to boost exports.

It has also placed increasing emphasis on its "liraization" strategy, saying that "the comprehensive review of the policy framework is being conducted with the aim of encouraging permanent liraization in all policy tools of the CBRT." The amount of exchange rate-protected lira deposits rose to TRY313bn (US$23bn) as of 7 February, of which TRY142bn was converted from FX deposit accounts. The scheme has also been expanded to include corporates and non-resident Turks, increasing its potential coverage.

Finance Minister Nureddin Nebati has also announced plans to attract "under-the-mattress" gold (a traditional hedge against lira depreciation) into the financial system, which he estimates at c5,000 tons (and an equivalent value of US$250-350bn). While most of this gold is likely to stay outside of the banking system, the right set of incentives could potentially boost lira demand at the margins.

Indeed, the liraization scheme has so far succeeded in stabilising the lira, which has traded in a relatively tight band of TRY 13.3-13.9/US$ so far this year (although it is unclear how much intervention by the CBRT and state banks has played a role, with US$7.3bn of intervention by the CBRT recorded in December). It has also temporarily stemmed the domestic crisis of confidence in the lira, with dollarisation moderating after a sharp spike through year-end (albeit still at high levels despite the TRY deposit incentives) and gold imports remaining low (albeit a lagging indicator). 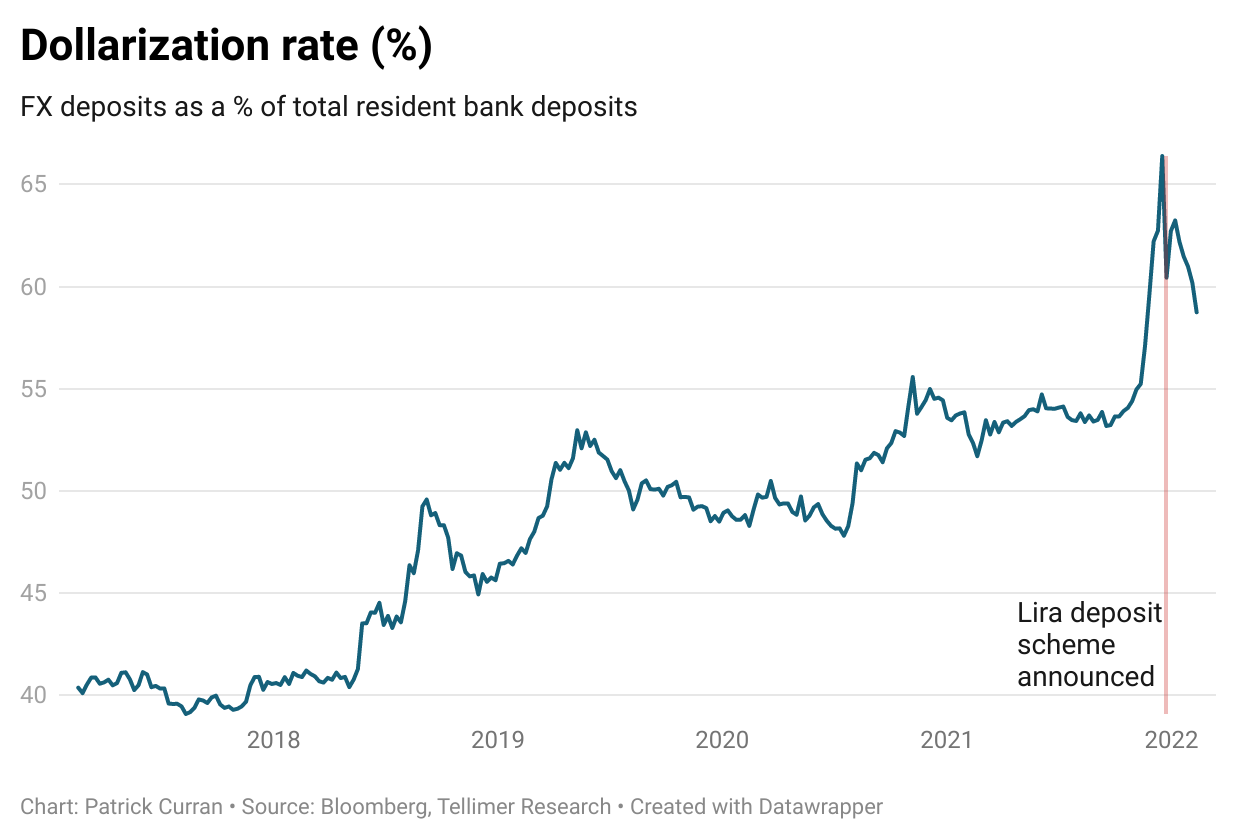 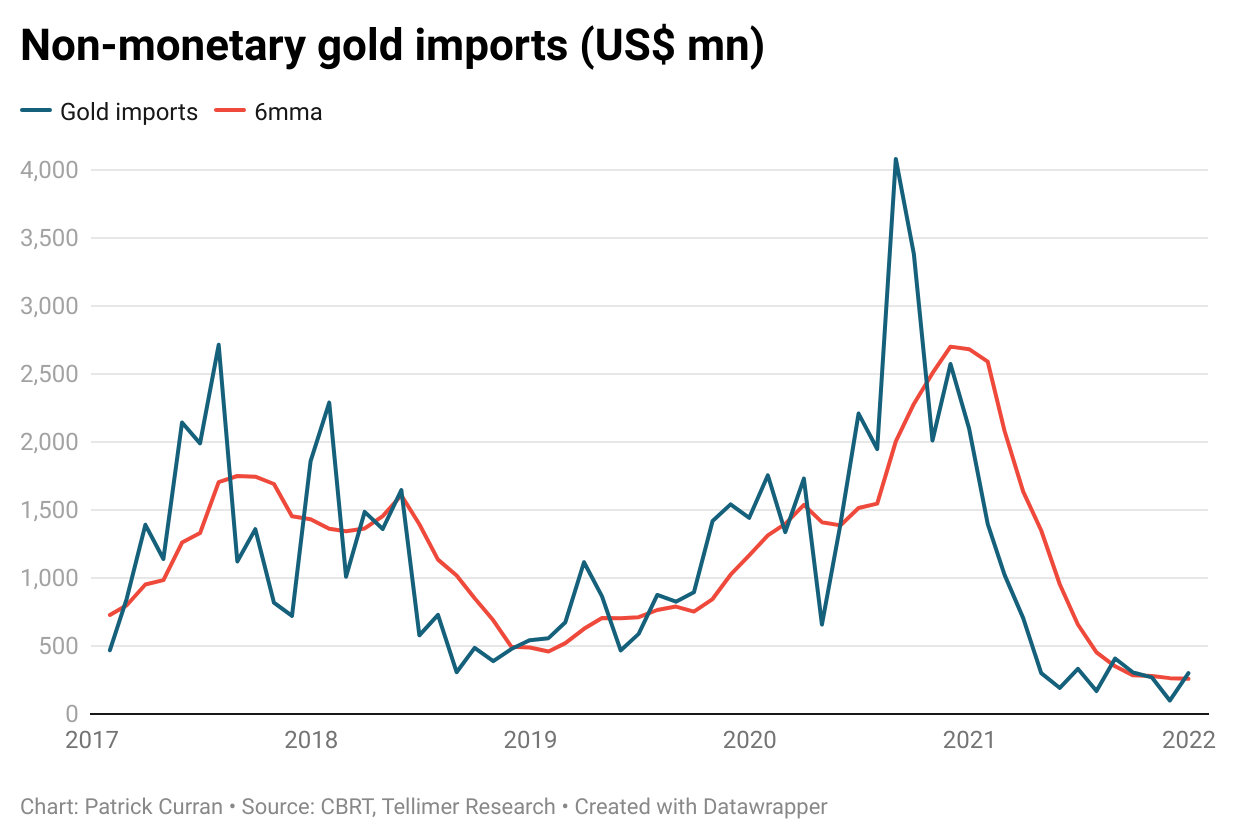 Meanwhile, foreign flows have also been relatively calm, with just US$700mn of outflows since the deposit scheme was introduced (all equity, with neutral flows to domestic government debt). That said, this is partly due to the lower stock, with a decade of steady outflows and TRY depreciation leaving just cUS$3.5bn of foreign-held domestic debt and cUS$19bn of equities (from highs of cUS$70bn and cUS$80bn, respectively, in 2013). Turkey also succeeded in issuing a US$3bn, 5yr Sukuk yesterday at a 7.25% yield, which was 3x oversubscribed amid an EM issuance drought. 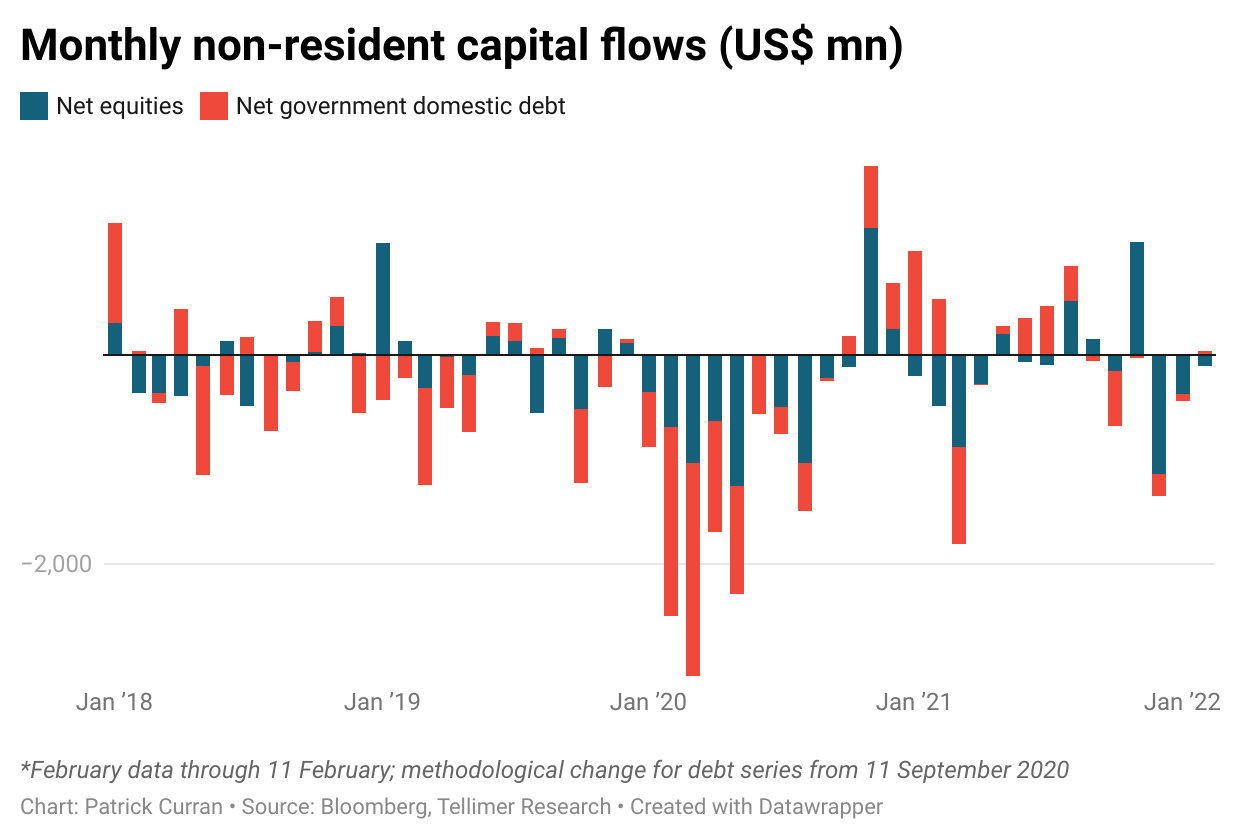 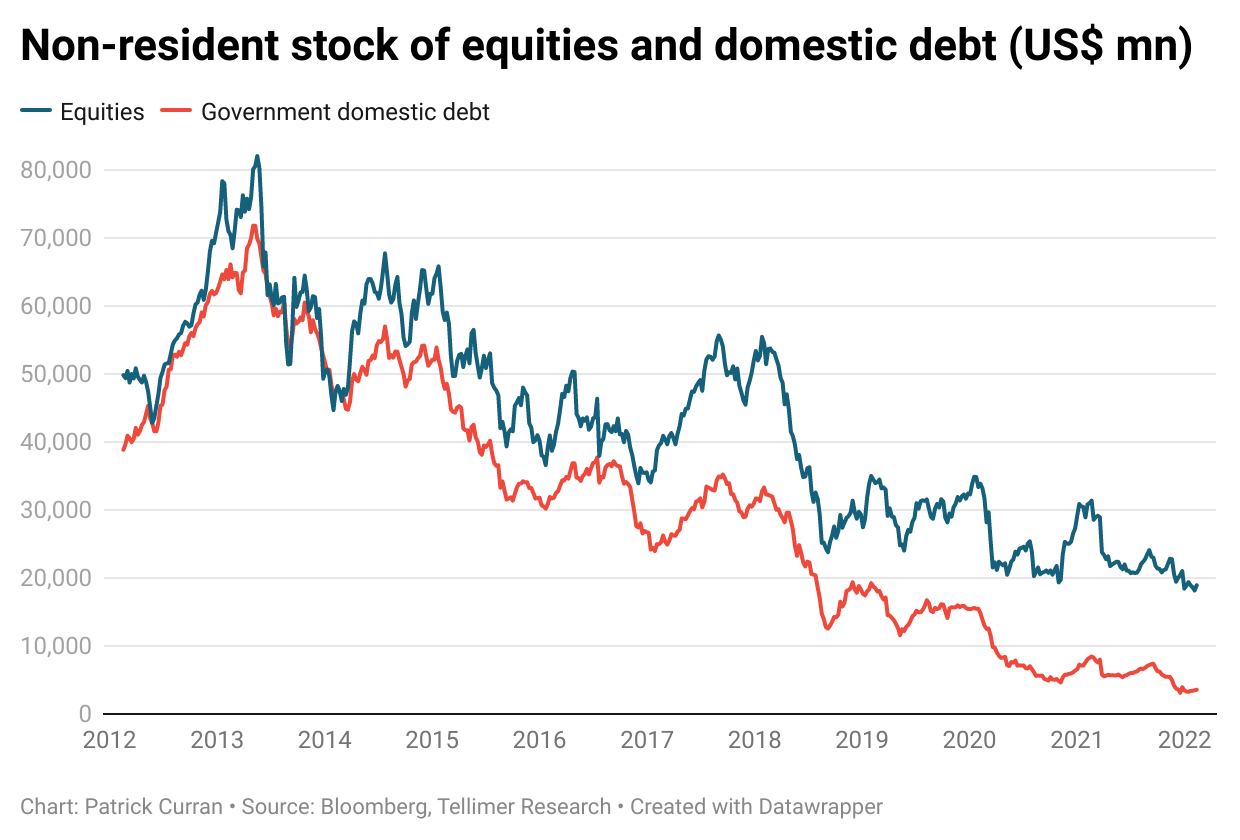 Against this backdrop, Turkish assets have outperformed notably so far this year, with the z-spread on the Bloomberg EM Turkey Hard Currency index narrowing by 200bps since its December peak and 100bps year-to-date (but still sitting 100bps wider than this time last year). This has equated to a total return of 0.8% versus -4% for the EM aggregate. Meanwhile, the Bloomberg EM Turkey Local Currency index has returned a total return of 6% in US$ terms versus 0.6% for the EM aggregate. 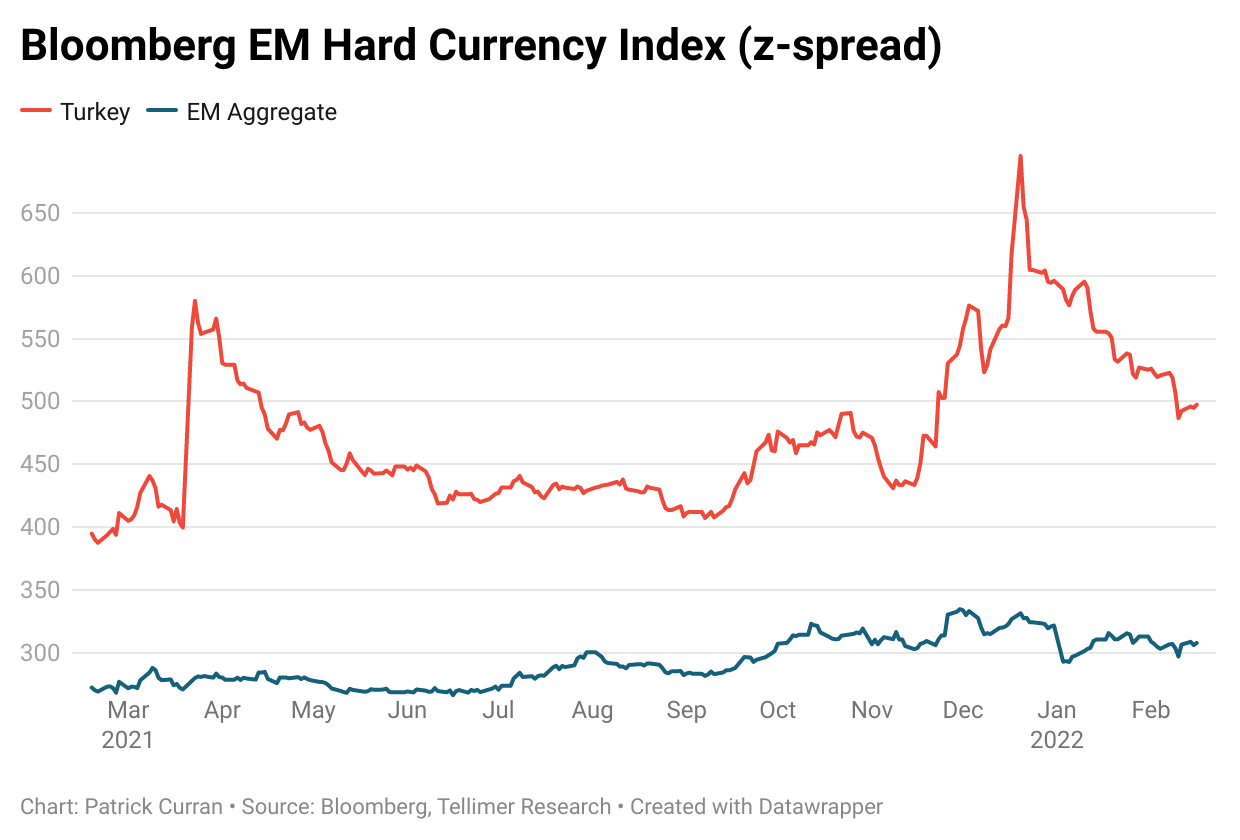 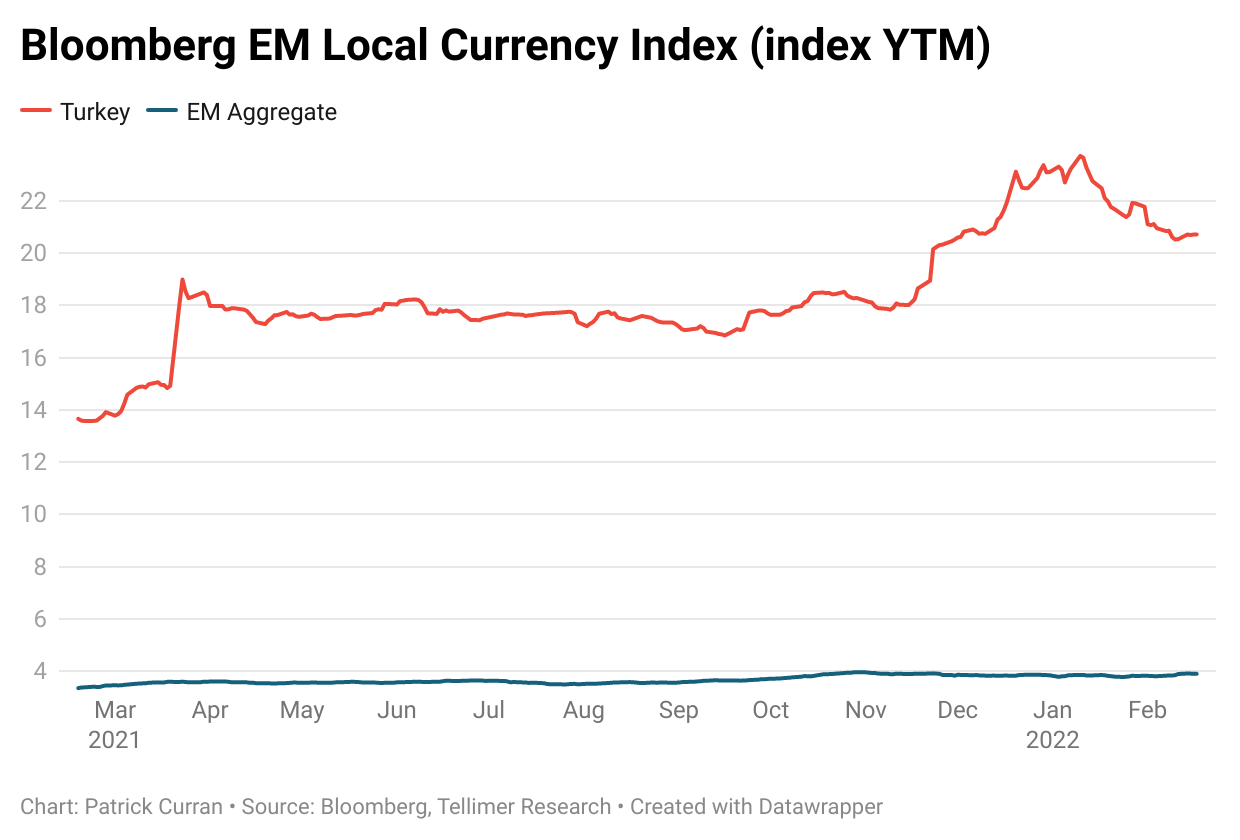 That said, we still expect this outperformance to be short-lived. The CBRT’s focus on unorthodox measures and liraization to reduce spiralling inflation while refusing to hike rates risks further entrenching elevated inflation expectations and is likely to provide only temporary reprieve. And as we have highlighted before, Turkey’s liraization strategy could backfire spectacularly if lira depreciation resumes, either imposing a large fiscal cost on the government to fund compensation payments or forcing the CBRT to print money and trigger a self-perpetuating currency and inflation spiral.

And while reserves have improved of late, external vulnerabilities remain high. Net reserves have more than doubled from cUS$7.5bn to cUS$16bn over the past month, boosting the underlying net reserve position (including swaps, which currently total cUS$57bn) from a record low of negative cUS$50bn to negative US$41bn. 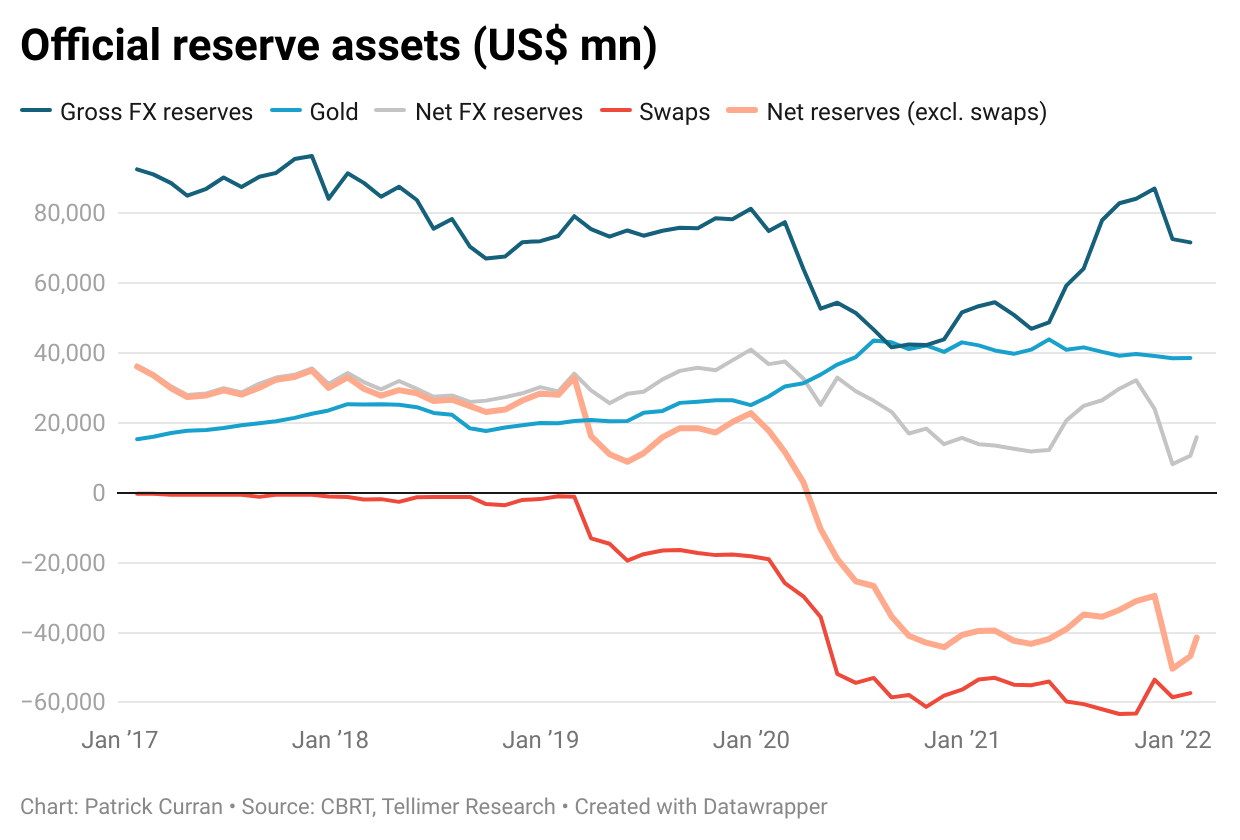 However, the CBRT's forecast for a current account surplus in 2022 is looking optimistic, with surging oil prices leading to a wider deficit in November and December and pushing the preliminary trade deficit c240% yoy wider in January to a decade high of US$10.4bn (with imports up c55% on a c240% rise in energy imports and exports up just c3.5%). High fuel prices have also forced the CBRT to sell US$10bn of FX to state-run energy importer Botas over the past four months, weighing on reserves. The boon from improving tourism could also begin to fade, with arrivals already exceeding 50% of pre-Covid levels (although there is clearly further upside here too). 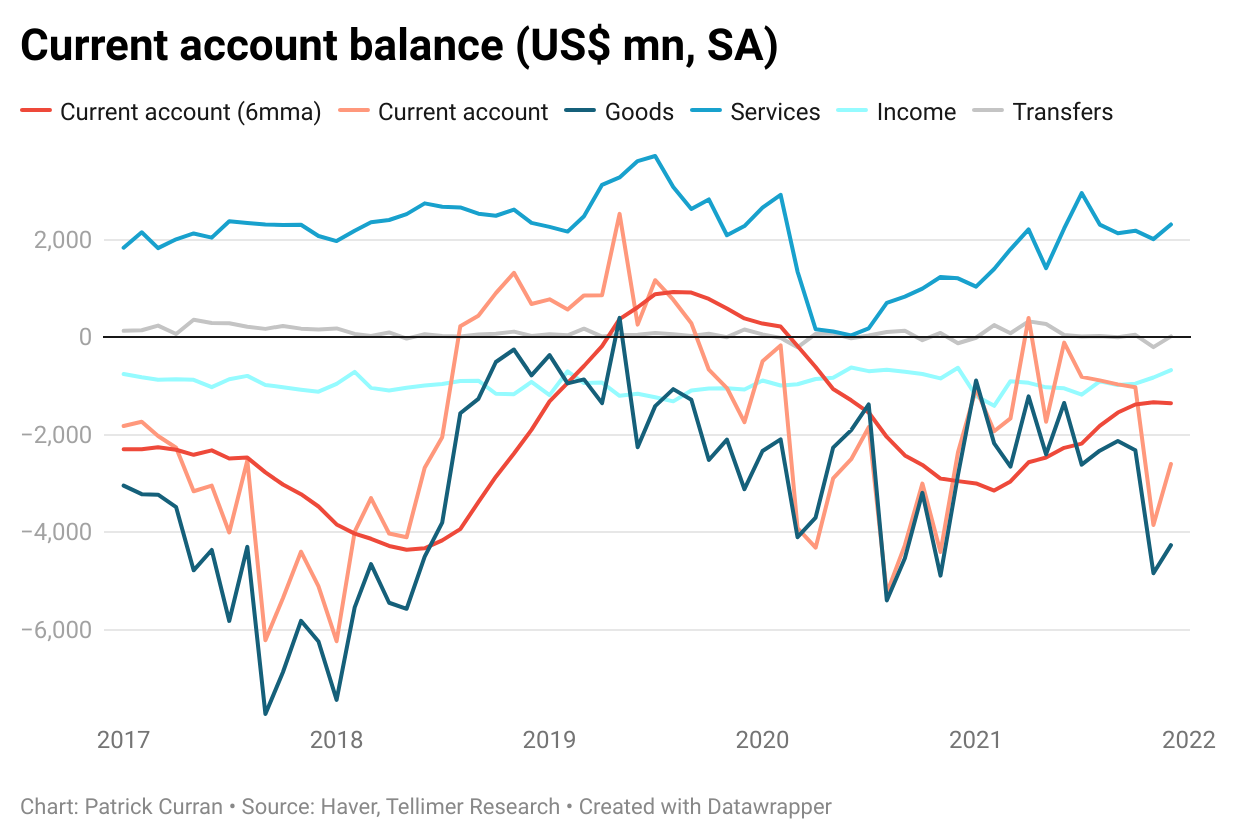 As a result of Turkey's high vulnerabilities and refusal to hike rates, Fitch lowered Turkey's credit rating another notch from BB- to B+ with a negative outlook this month, saying that "Turkey's expansionary policy mix (including deeply negative real rates) could entrench inflation at high levels, increase the exposure of public finances to exchange rate depreciation and inflation, and eventually weigh on domestic confidence and reignite pressures on international reserves."

With that said, the recent lira stability and outperformance of Turkish assets looks more like the calm before a storm than the new normal. Markets seem to agree, with lira forwards pricing the TRY at c17/US$ in the next 12 months versus the current rate of c13.6/US$ (a c20% depreciation). To preserve lira stability and rein in inflation, the CBRT will need to hike its policy rate to begin the process of re-anchoring inflation expectations and restore domestic and foreign confidence in the currency.

Markets are currently pricing in c1000bps of rate hikes over the next year. If the CBRT fails to reverse course and decides instead to hold rates, the lira is likely to come back under pressure. However, there is little sign of a change in tone by President Erdogan and the CBRT, which has chosen to double down on its unorthodox liraization rather than implement a bona fide tightening of its policy stance. 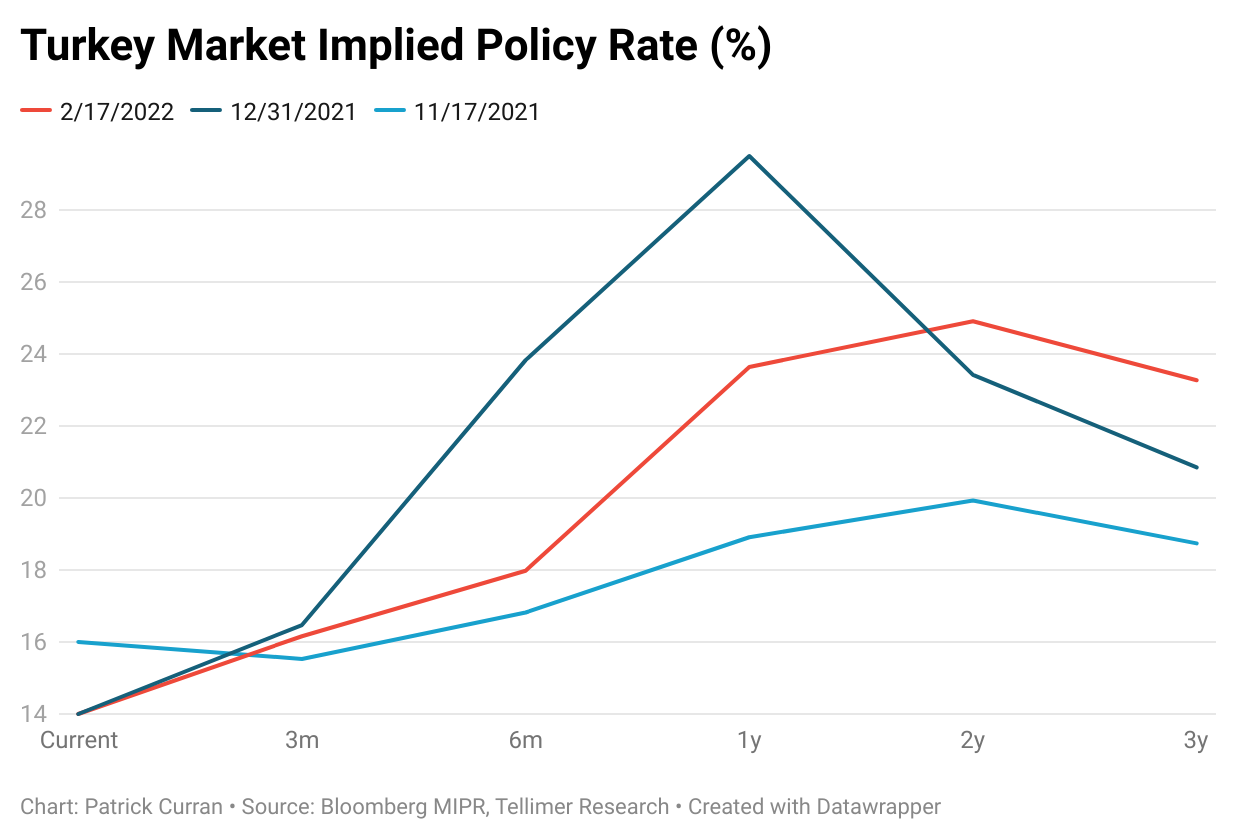 Indeed, President Erdogan, encouraged by the renewed lira stability, has only seemed to become more entrenched in his anti-interest rate views, saying before today's MPC decision that the "debate over interest rates has subsided significantly." Sadly, his obsession with low interest rates has not only led to runaway inflation, but it has also failed to achieve its stated goal of lowering borrowing costs, with lending rates actually rising since the latest cutting cycle began. 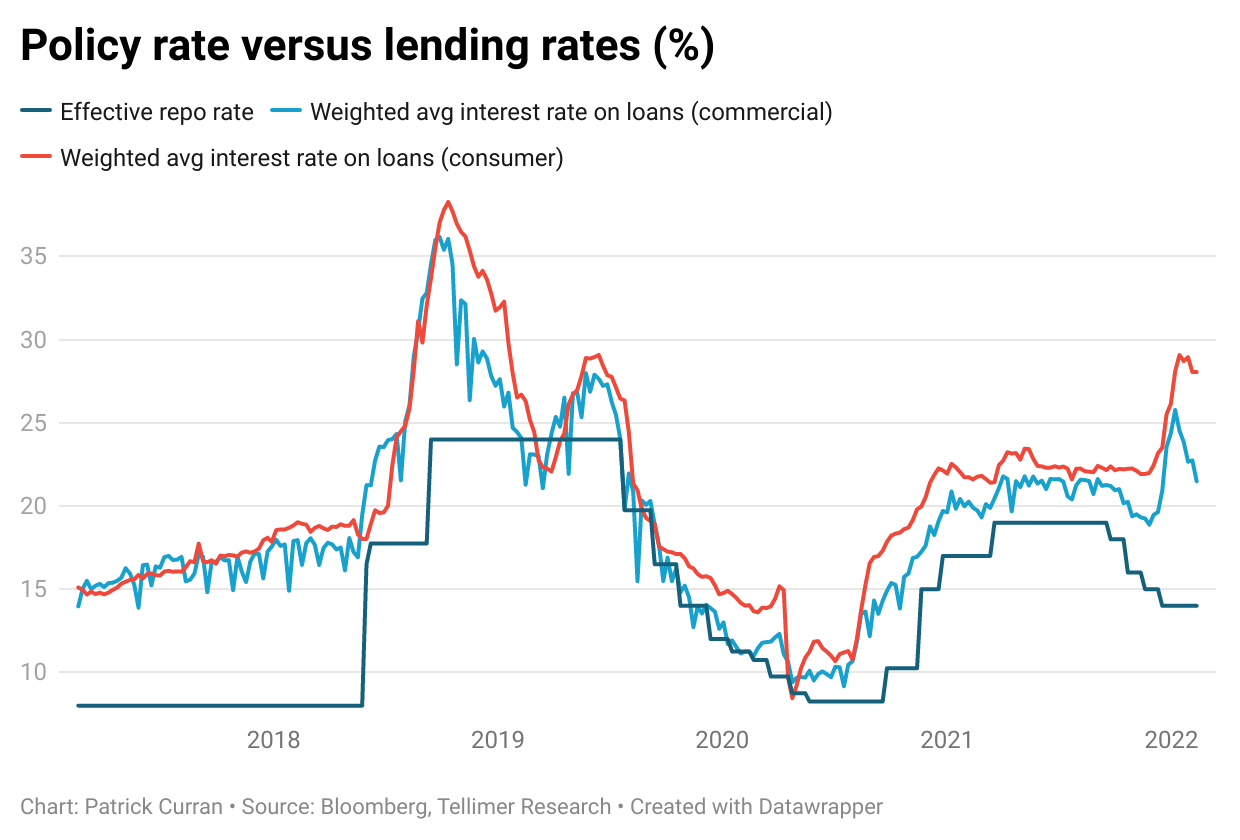 Barring a reversal of the CBRT's policy stance, which we think is unlikely without being triggered by another currency crash, we retain our Sell recommendation on the TRY and TRY-denominated government debt.