The CBRT held its policy rate at 19% today, in line with the expectations of all 20 analysts surveyed by Bloomberg. The statement maintained that "the policy rate will continue to be determined at a level above inflation to maintain a strong disinflationary effect until strong indicators point to a permanent fall in inflation and the medium-term 5% target is reached." 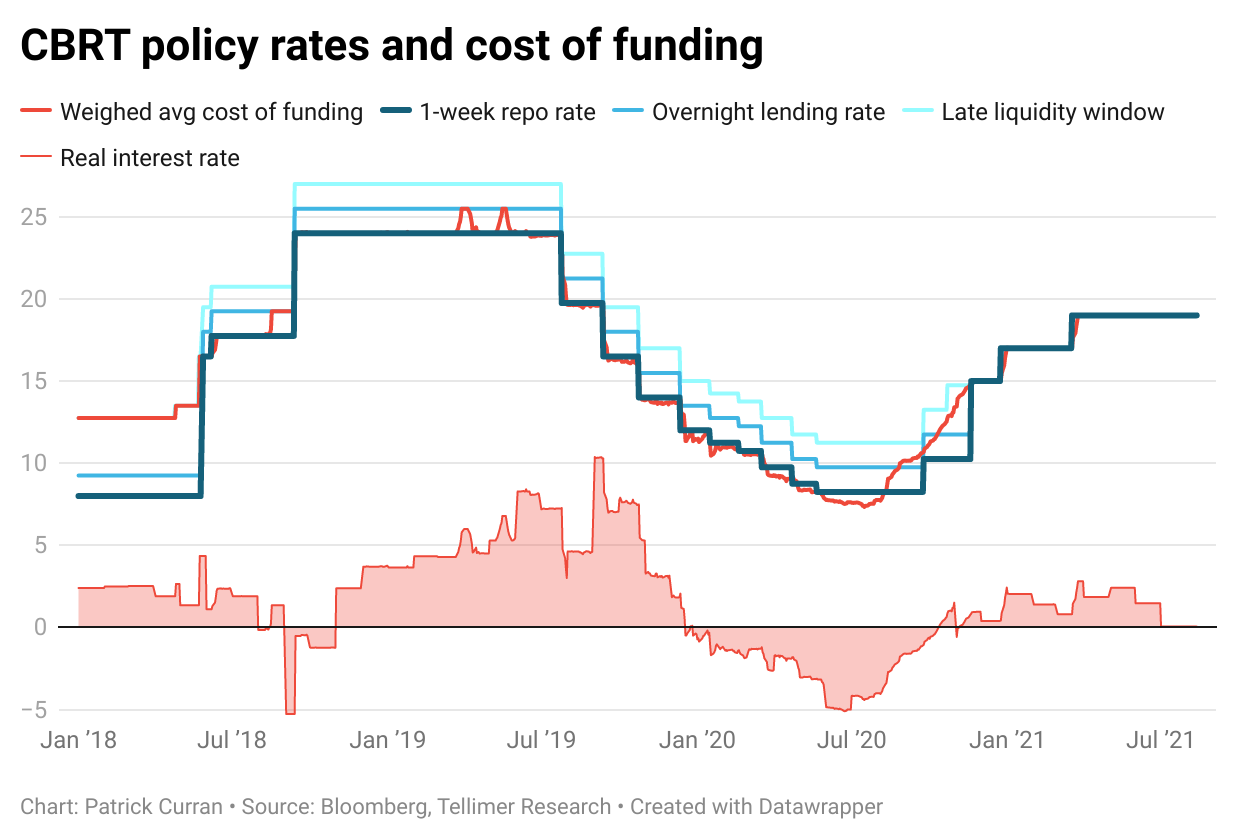 President Erdogan had sparked concern last week by reiterating his preference for lower interest rates, saying in a TV interview that "it is not possible for inflation to accelerate further from now on, because we're transiting to lower interest rates" and adding that "I guess I am giving this signal to somewhere," hinting at pressure on CBRT Governor Kavcioglu, who he appointed in March in the hopes that he would begin to unwind the interest rate hikes of his hawkish predecessor.

However, rising inflation and inflation expectations have forced Kavcioglu to stay the course. Inflation rose to 19% yoy in July, pushing the real policy rate to zero from 2.4% in May, while 12m inflation expectations from the CBRT’s monthly survey remain elevated at 12.5% after moderating somewhat in August and the 10-year breakeven rate is still close to 15%. The CBRT has also raised its year-end inflation forecast to 14.1% from 12.2% (below the Bloomberg survey of 16.1% and CBRT survey of 15.6%) end-2022 forecast to 7.8% from 7.5% (below the Bloomberg survey of 12%). 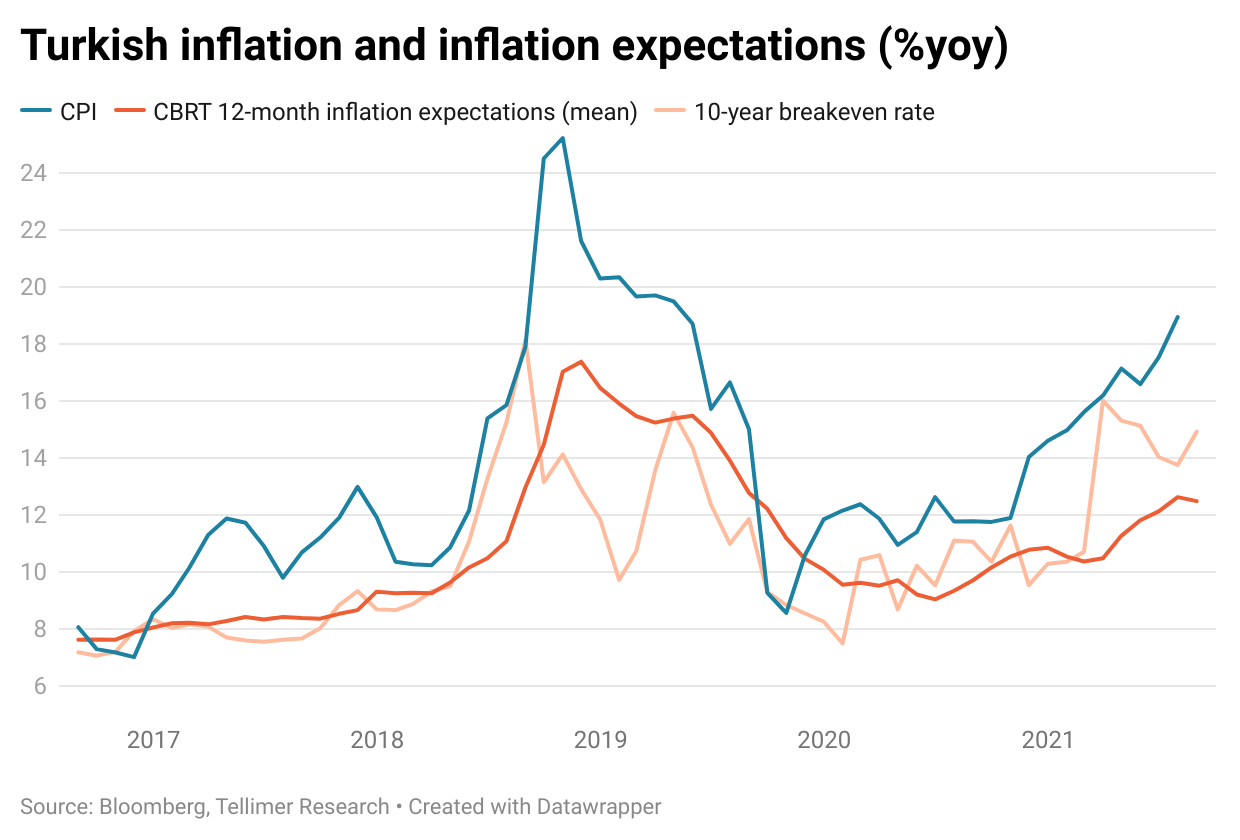 The CBRT attributed July's inflation acceleration to the rise in food inflation from domestic supply-side constraints and drought, rising international food prices, and the effects of the economic reopening. That said, that statement highlighted that "high levels of inflation expectations continue to pose risks to the pricing behaviour and inflation outlook," adding that "the current tight monetary policy stance will be maintained decisively until the significant fall in the Inflation Report's forecast path is achieved." 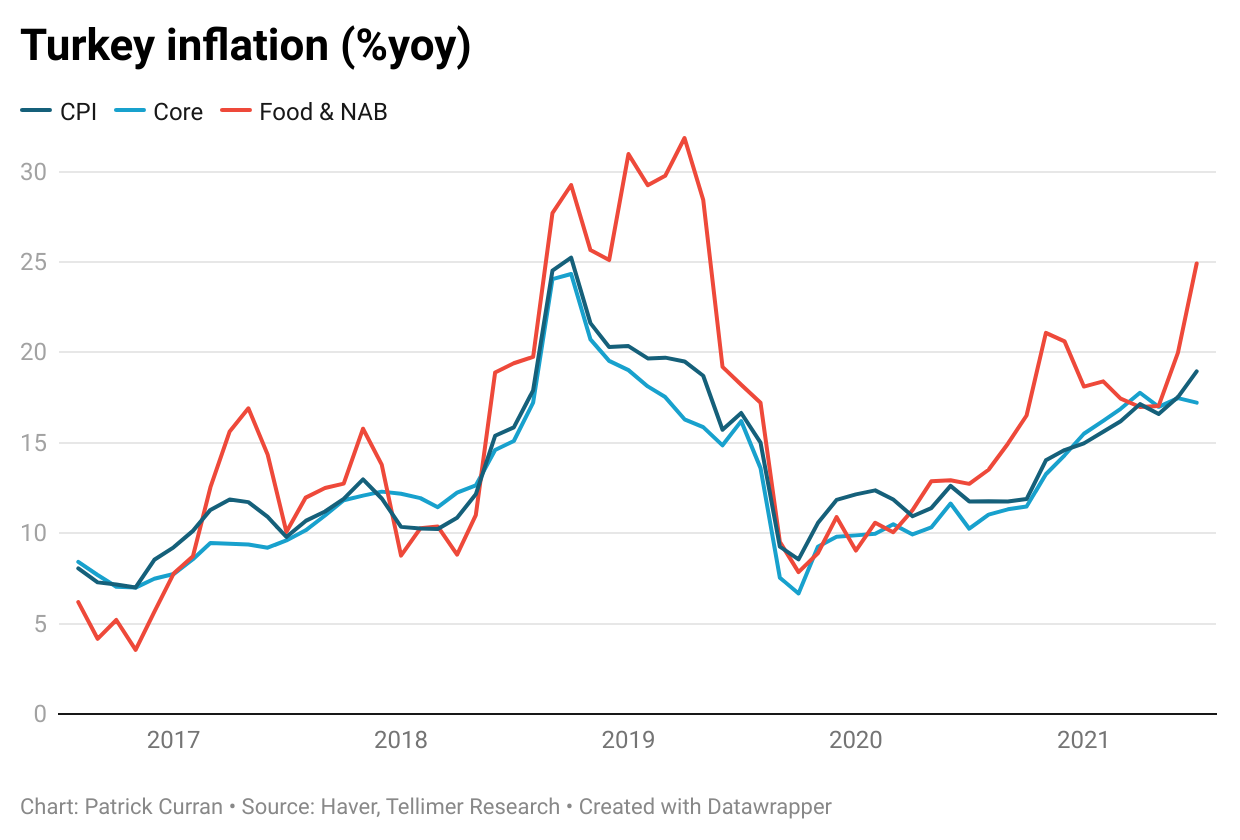 On the other hand, the CBRT says that "the decelerating impact of the monetary tightening on credit and domestic demand is being observed." Indeed, private sector credit growth has slowed from 43% yoy last October to just 19% in June, which is flat in real terms. Monetary aggregate growth has also slowed over that period, with M2 growth falling from 48% yoy to 25% yoy. However, both rates remain elevated, highlighting the need for a continued tight stance to bring both indicators to rates that are more consistent with a single-digit inflation target. 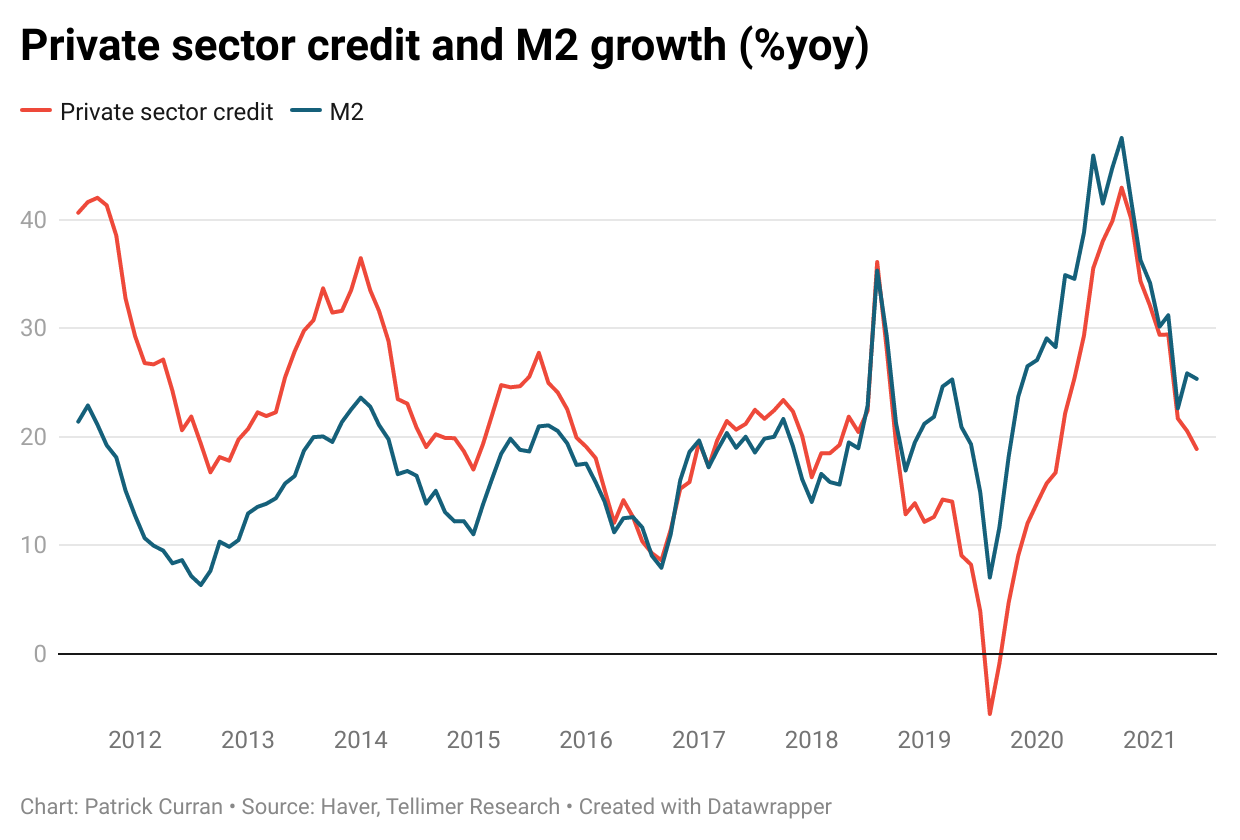 Looking beyond the inflation outlook, the statement says the current account "is expected to post a surplus in the rest of the year due to the strong upward trend in exports, and the strong progress in the vaccination programme stimulating tourism activities." There has been some improvement in the current account deficit ytd, falling to US$12.7bn through May from US$18.2bn in the same period last year, but a surplus in H2 21 still seems unlikely. It is true that the exports are growing strongly (35% yoy through July), but this has been offset by rising imports (26% yoy), leaving the trade balance essentially unchanged in the seven months through July. And while tourism has begun to slowly rebound, revenue is still 55% below 2019 levels in H1 21. 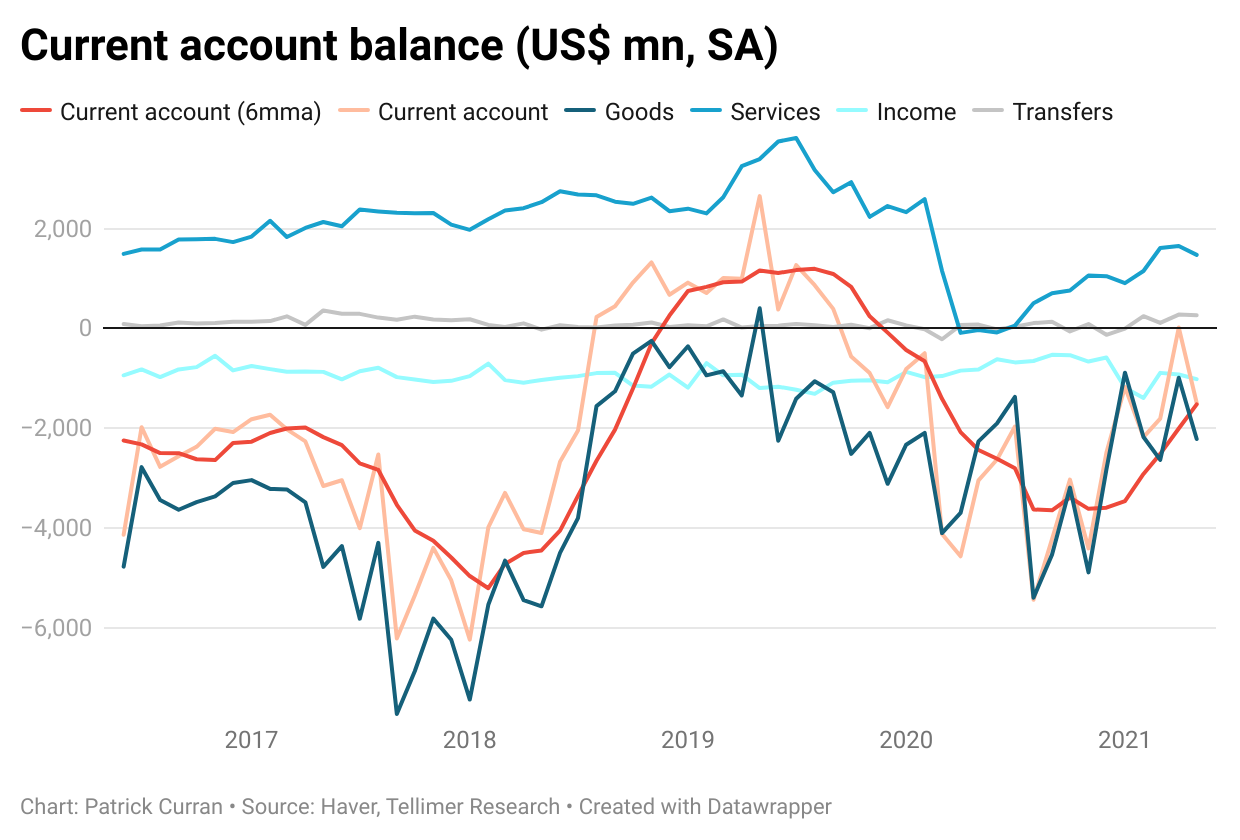 With the current account narrowing, reserves have started to recover with net reserves rising to US$25bn from a low of US$10bn in April. While the danger of a BOP crisis seems to have subsided for the time being, the margin for error is still very low, with reserves sitting at negative US$35bn in July once swaps (which have risen by over US$6bn since January) are factored out and short-term external debt sitting at US$189bn. 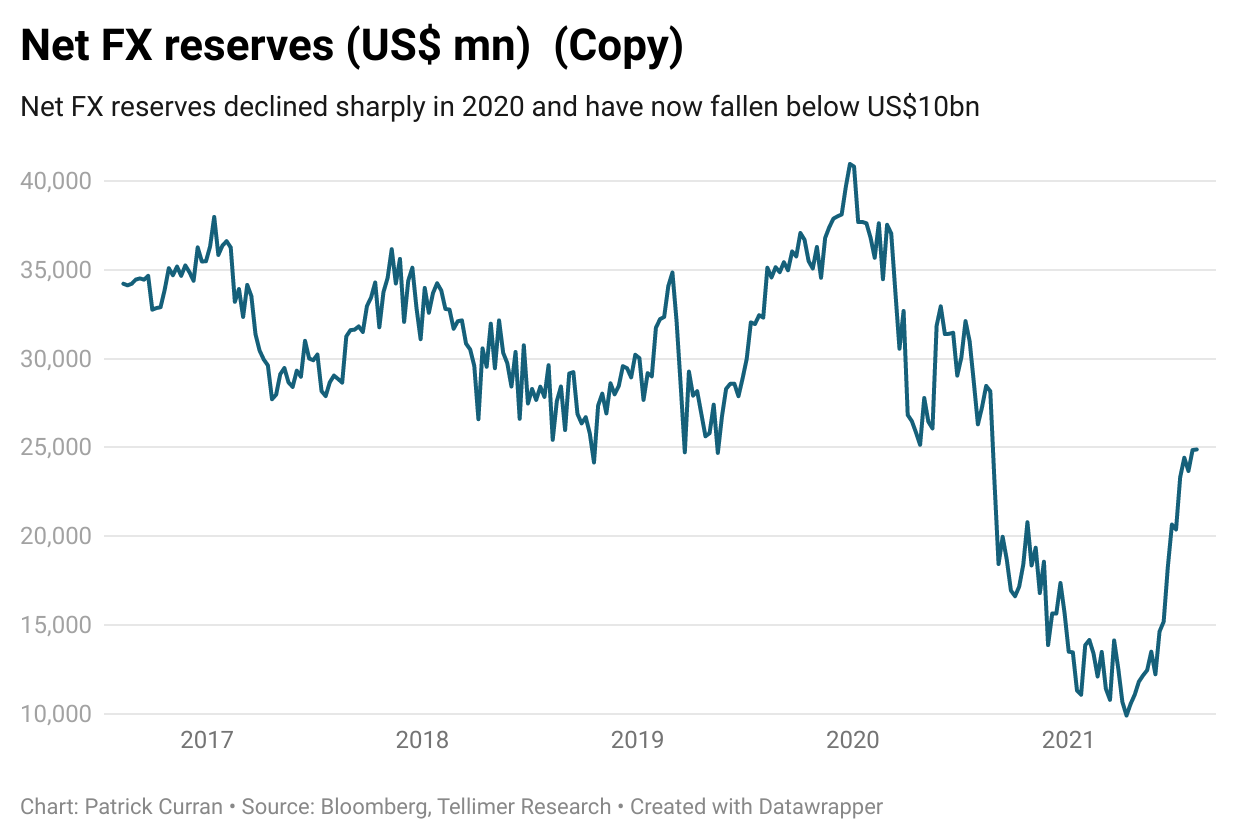 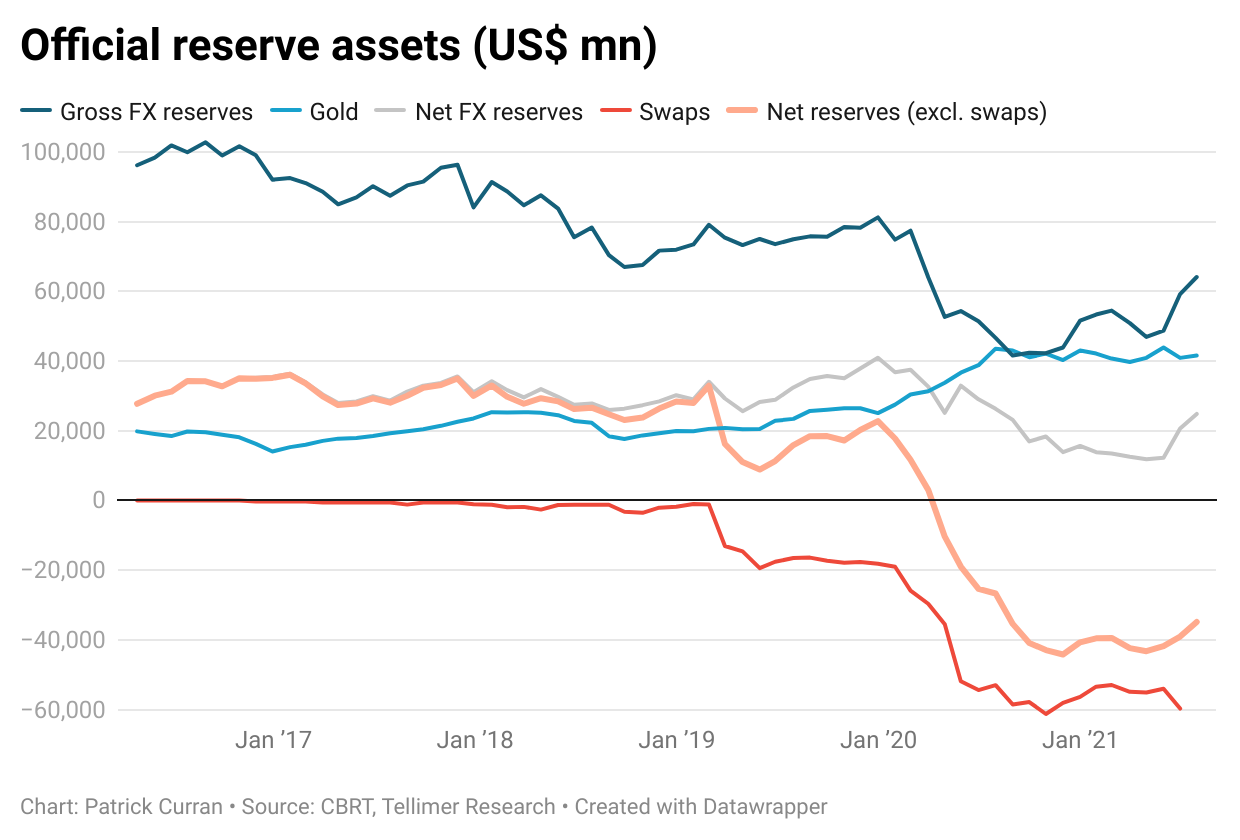 Domestic confidence in the TRY seems to have improved in recent months, with the rate of dollarization steady at around 54% (albeit still at very elevated levels) and non-monetary gold imports (typically used as a hedge against TRY weakness) declining sharply in H1 21. 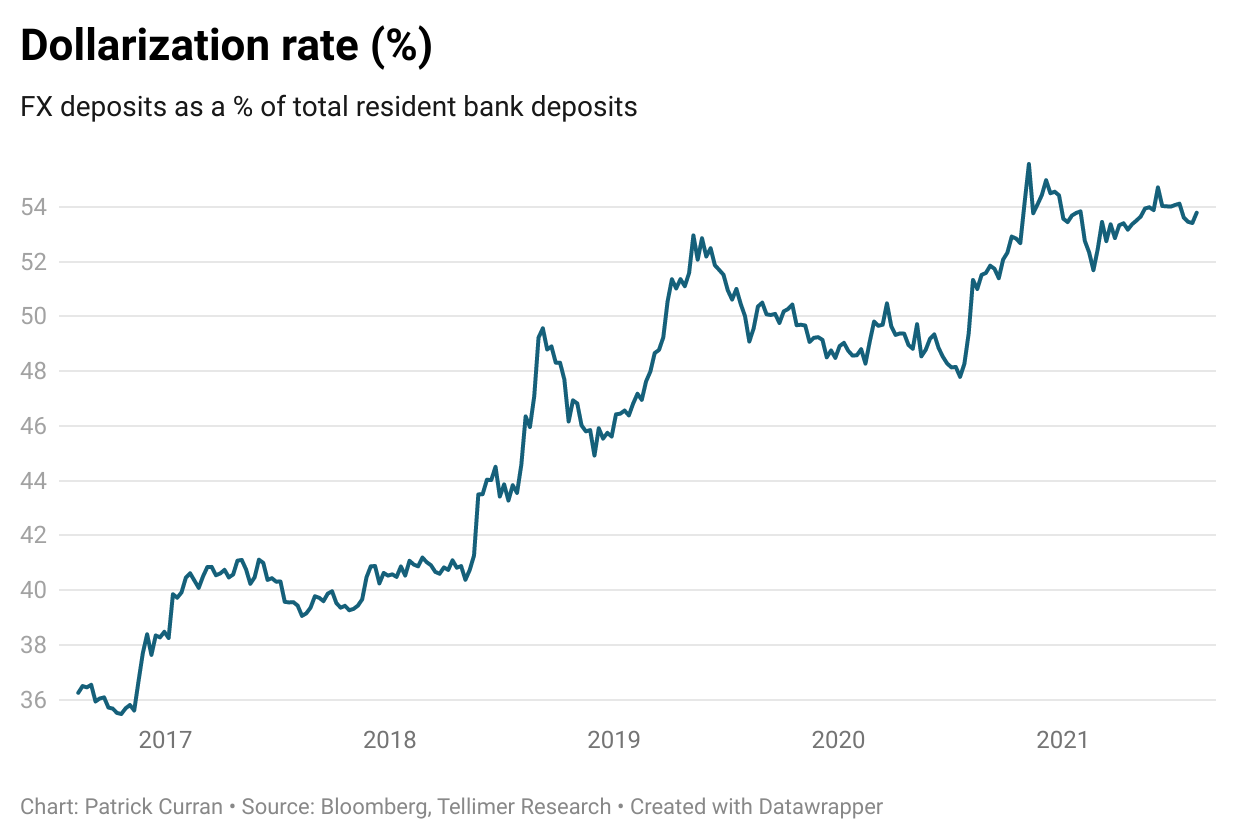 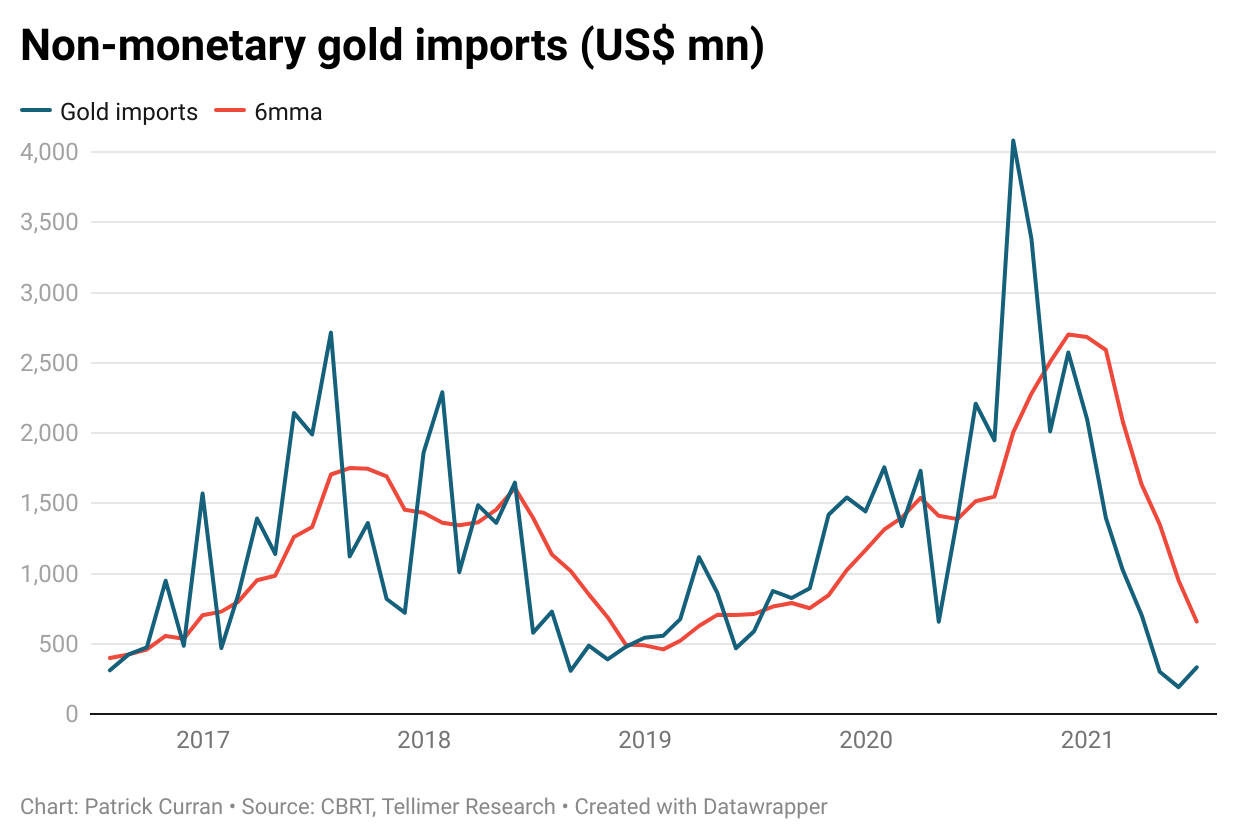 Non-resident portfolio flows have also stabilised in recent months, with cUS$1.5bn of inflows into domestic government debt and equities since early April, reversing some of the US$2.4bn of outflows that followed Kavcioglu's appointment. That said, FDI remains tepid at just 0.5% of GDP in the year through Q1 21, which will keep Turkey reliant on fickler portfolio flows to finance its current account deficit. 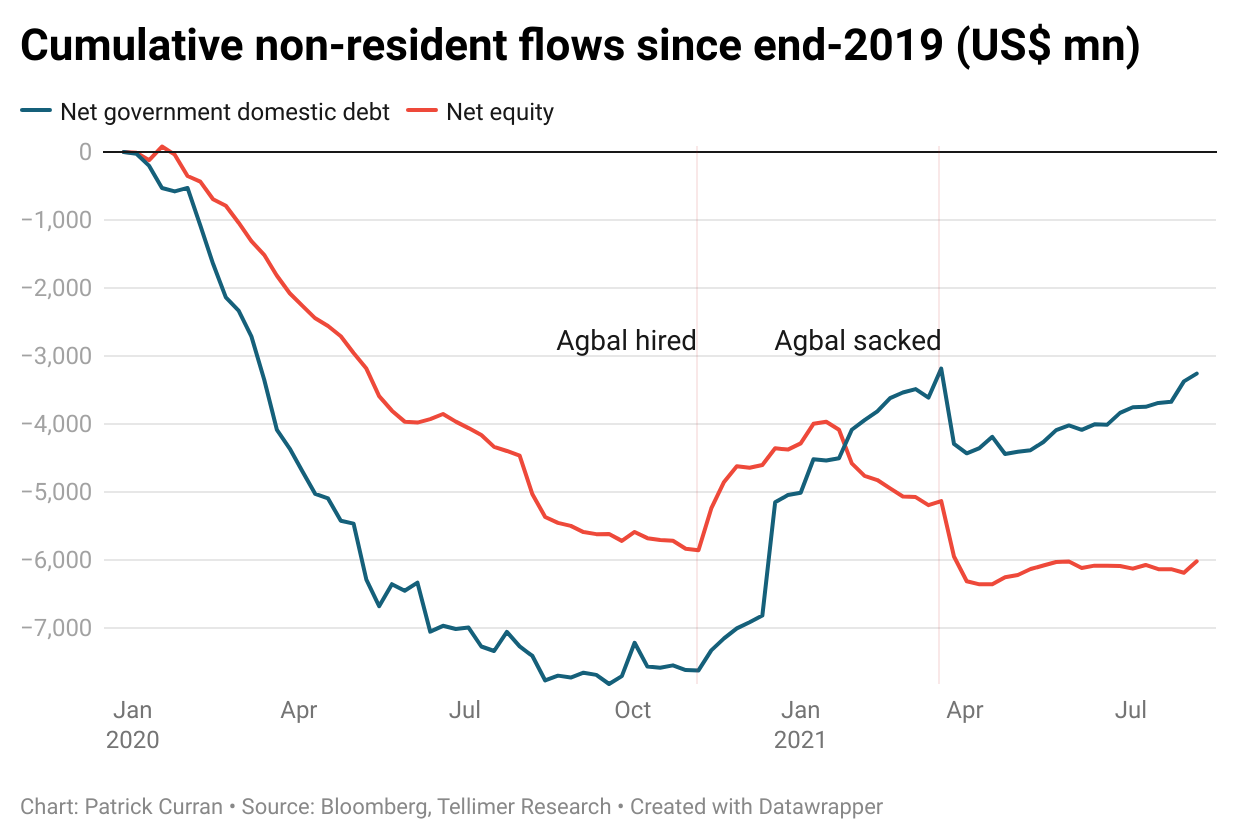 Overall, the outlook for the TRY has stabilised somewhat in recent months. Governor Kavcioglu has stayed true to his promise to keep the real policy rate above inflation, defying those who worried his appointment and subsequent leadership changes at the CBRT signalled Erdogan's capture of the institution and proving that it is still able to resist political pressures to deliver the policy that economic and market conditions demand rather than the one that Erdogan desires. The TRY has appreciated by 0.7% following today's decision at the time of writing, and has now been flat for the past two months (but is still nearly 16% weaker than it was before Kavcioglu's appointment in March). 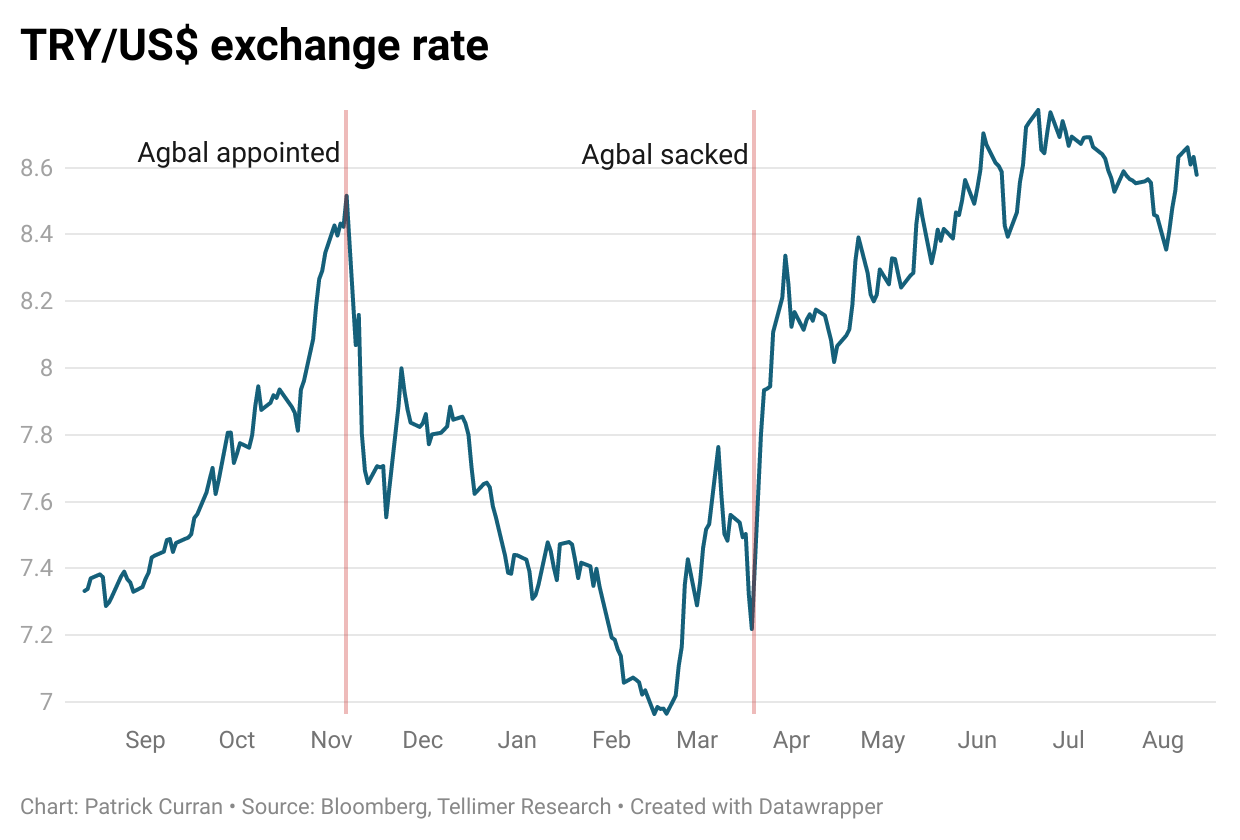 However, with inflation continuing to rise and expectations still well anchored in double-digit territory, the CBRT cannot be complacent. Further inflation increases may require an even tighter monetary policy stance, but that is not something that Governor Kavcioglu is likely to deliver. On the other hand, if supply-side factors begin to fade and inflation starts to decline, there is a risk of premature rate cuts which could slow or reverse the decline by boosting inflation expectations and sending the TRY into another tailspin (despite recent analysis by the IMF that the TRY is c20% undervalued).