Turkey's central bank (CBRT) cut rates by 100bps to 18% on 23 September. All but one of the 23 analysts surveyed by Bloomberg had expected a hold, with the lone outlier expecting a 50bps cut. The move sent TRY tumbling by 2.6% on Thursday and Friday, but it has recovered a bit in early trading on Monday and now sits 2.2% lower at the time of writing. Having depreciated by 6% on the month, TRY is the worst-performing currency in EM, aside from the Myanmar kyat (MMK, down over 12%). 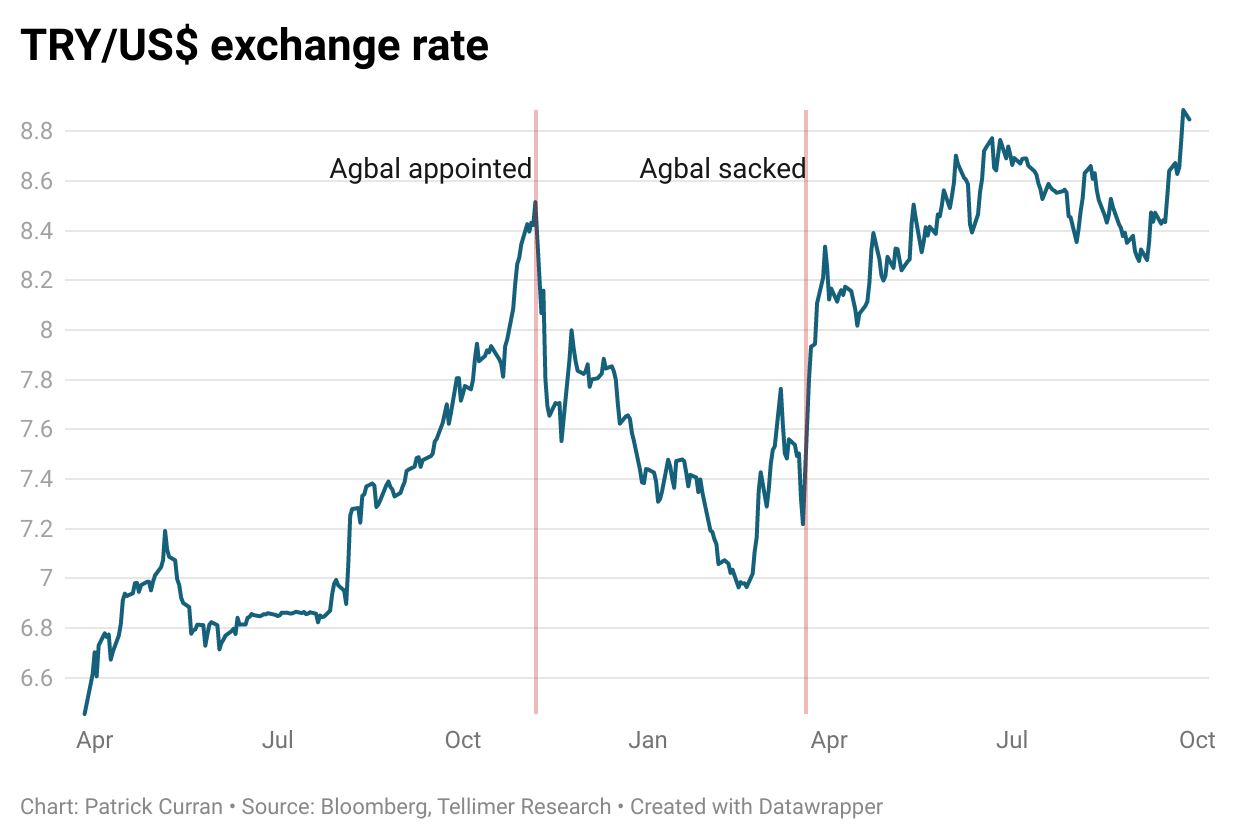 In our view, it is incorrect to characterise the move as a 'surprise'. Indeed, President Erdogan telegraphed it by saying in August that “we’re transiting to lower interest rates.” More recently, he has blamed supermarkets for rising food prices. CBRT Governor Sahap Kavcioglu had exceeded expectations by holding rates at each of the five meetings since his appointment in March but, ultimately, the security of his job depended on his acquiescence to Erdogan’s demands for lower rates.

Kavcioglu had promised to maintain positive real rates, and inflation is still elevated at 19.25% in August. However, the recent announcement of a shift in focus from headline to core inflation, which sits at 16.76%, signalled an elevated risk of cuts at Thursday’s meeting. We also expected Kavcioglu to hold the line for one meeting more, but our conviction was relatively low. 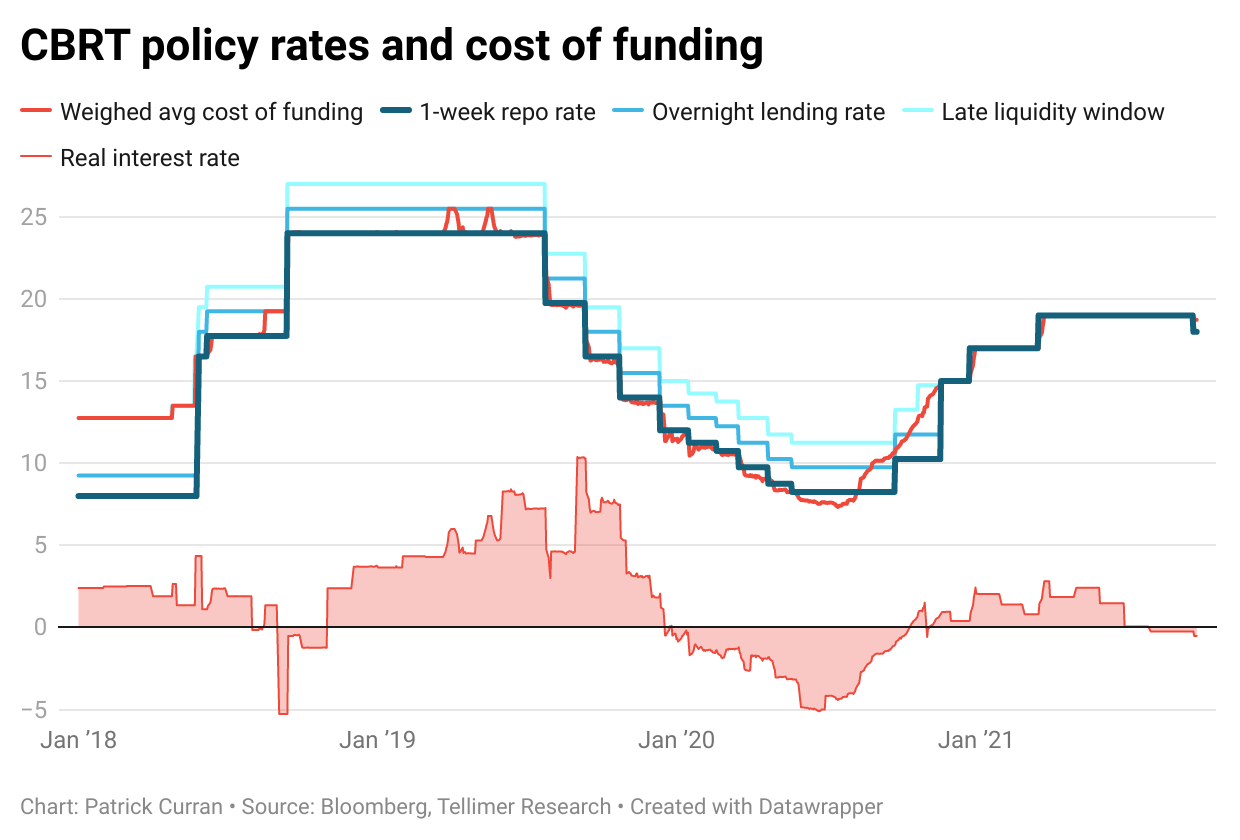 The move represents another major policy misstep for the CBRT. While it is true that inflation is partly transitory and will likely start moderating in the coming months, Thursday’s premature rate cut will likely trigger further TRY weakness that will slow the disinflationary process. Meanwhile, rising inflation expectations show that inflation is likely to remain firmly anchored in double-digit territory. 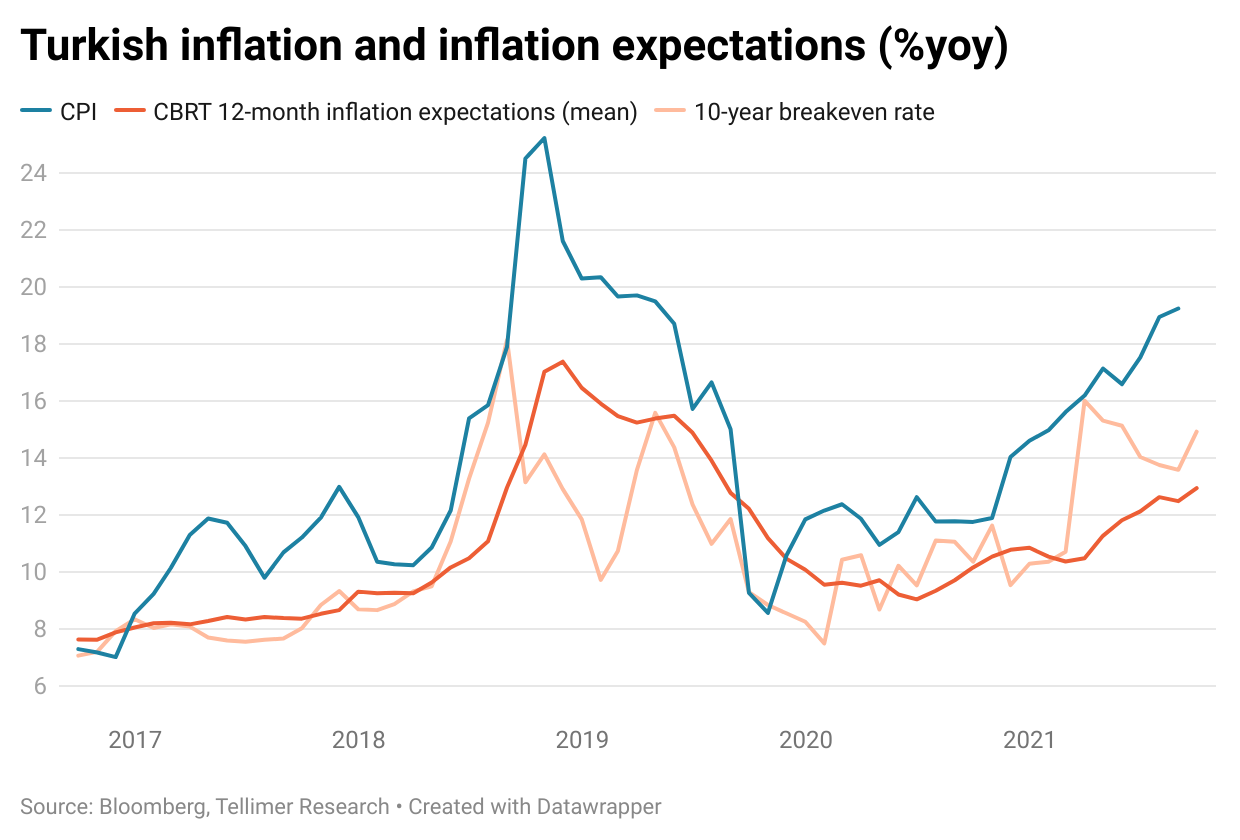 To be fair, rising tourism has reduced Turkey’s current account deficit to just US$13.7bn through July compared with US$23.2bn at the same time last year, and the CBRT expects the current acciount to remain in surplus through year-end. In turn, this has pushed up net reserves from a low of cUS$10bn in April to cUS$28bn by mid-September, helping to reduce Turkey’s external imbalances. 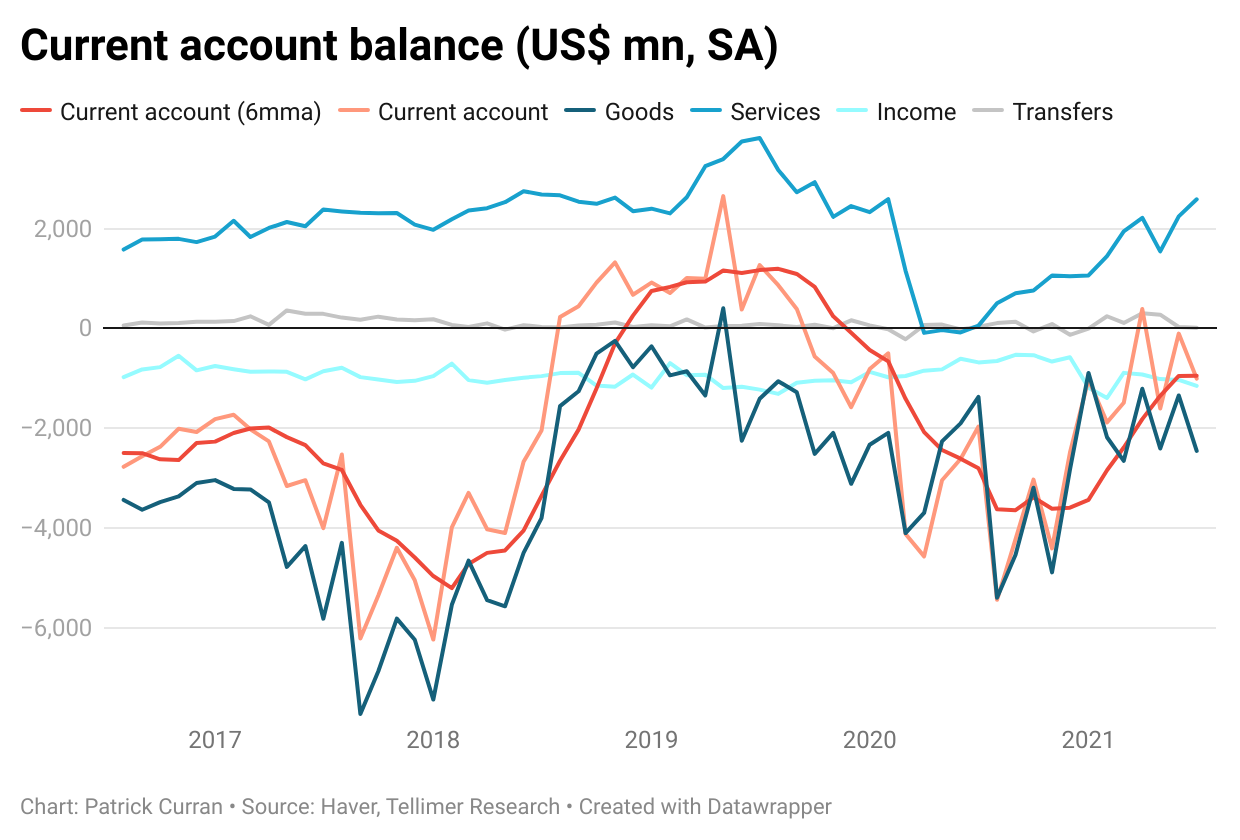 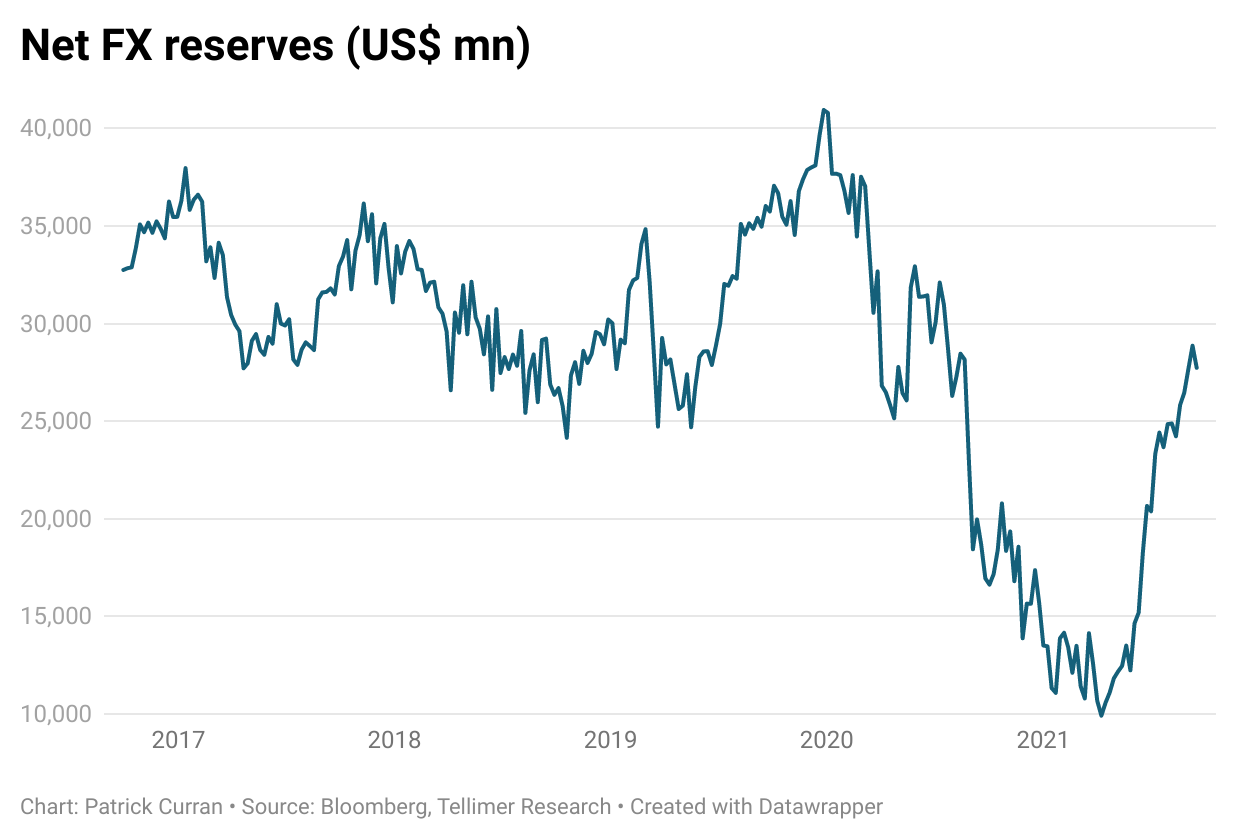 However, net reserves are negative US$32.75bn once swaps of US$60.5bn are factored out, and vulnerabilities are still elevated, with short-term external debt at US$169bn (albeit with only US$36bn related to the public sector). Further rate cuts could reverse the balance of payments improvement by triggering capital outflows and raising imports (although this may be offset by TRY depreciation), potentially giving renewed life to dollarisation and non-monetary gold imports (FX deposits have fallen by cUS$5bn ytd but the dollarisation rate is still high, at c53%, while non-monetary gold imports fell to just US$170m in July from US$1.95bn at the same time last year and a peak of over US$4bn last August). 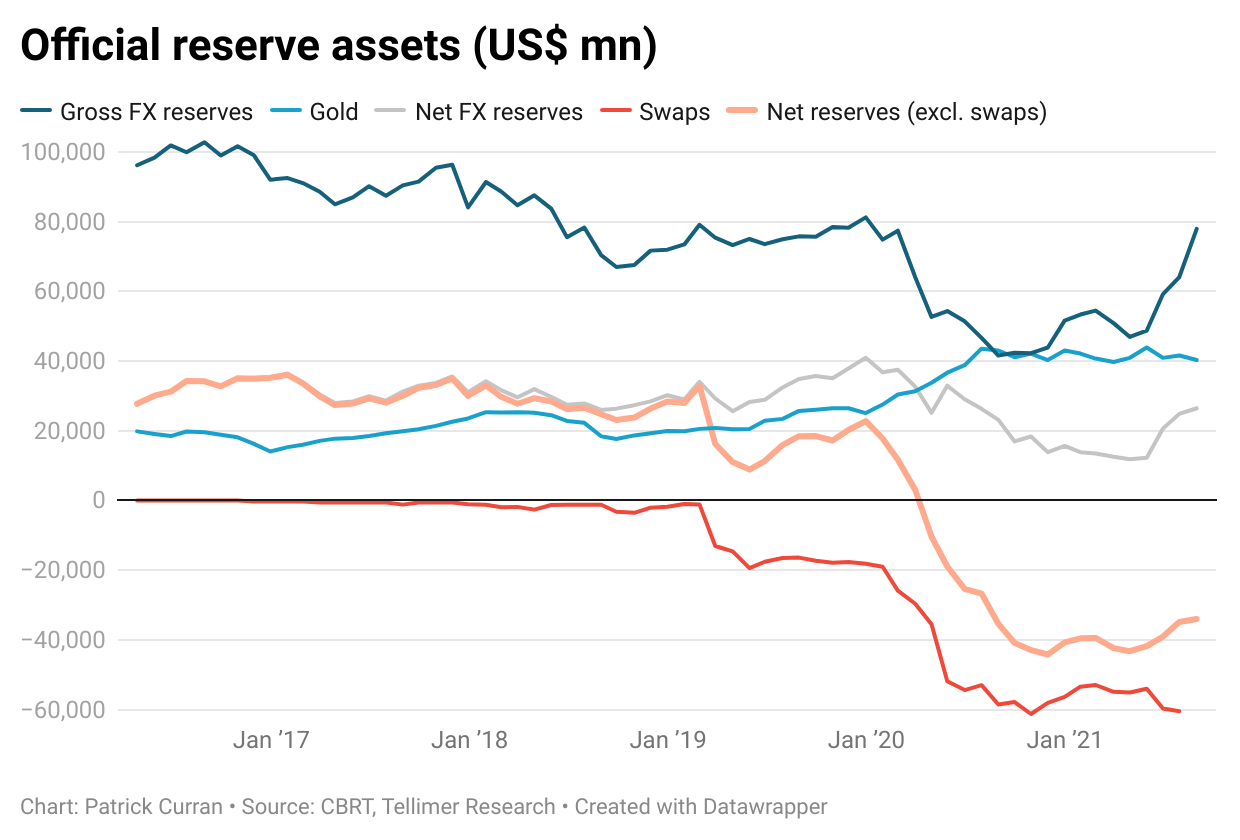 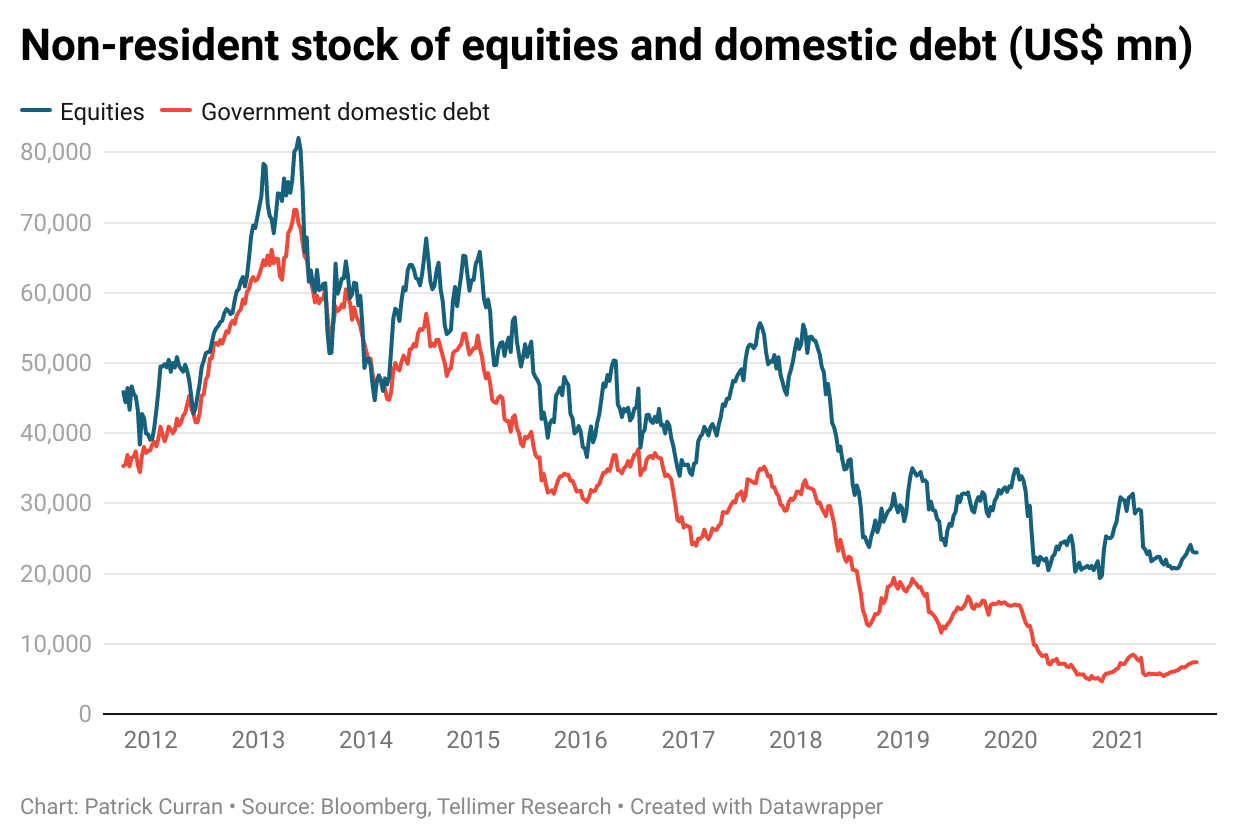 Even though the IMF saw TRY as being 20% overvalued in 2020, a severe and prolonged overshoot is now likely in store. It is still possible that the CBRT can pull back from the brink by waiting for concrete evidence of falling inflation and expectations before continuing the cutting cycle. However, an outright reversal will only occur after massive TRY depreciation (Erdogan let it drop c23.5% over three months, before hiring Agbal and giving him the license to hike). If the CBRT cuts more quickly than anticipated (with the market pricing c90bps of cuts through year-end and c250bps over the next 12 months), a sharp selloff is likely to ensue.

For this reason, we downgrade our recommendation from Hold to Sell on local government debt, with its 12-month T-bill yielding just over 17% versus inflation of 19.25%. For the time being, we keep our Hold recommendation on Turkish credit, with its 10-year eurobond spread widening by 70bps so far this month even as Turkey’s public debt and budget deficit continues to drop (with public debt dropping from 39.4% of GDP in Q3 20 to 34.6% in Q2 21 and the budget deficit dropping by two-thirds through August).