Turkey’s central bank (CBRT) has continued its cutting cycle, reducing the one-week repo rate by 150bps to 10.5%. This compares to projections for a 100bps cut by 18 of the 22 analysts surveyed by Bloomberg, with only one analyst forecasting a 150bps cut, another forecasting a 50bps cut, and two projecting no change.

After hitting pause on the cutting cycle over nine monthly MPC meetings starting last December, the CBRT has now delivered greater-than-consensus cuts in each of the last 3 meetings, totaling a cumulative 350bps (and this at a time when the rest of the world is hiking, with Turkey as the only central bank other than Angola’s to cut its policy rate this year across our sample of 66 emerging markets, with six on hold and 58 hiking for a median increase of 300bps).

With inflation running at 83.5% yoy in September, today's cut pushes the real policy rate to -73%. The MPC statement says, "The Committee evaluated taking a similar step in the following meeting and ending the rate cut cycle", implying another 150bps cut to 9% in November before the CBRT hits pause and seemingly fulling Erdogan’s promise earlier this month that "interest rates will continue to be lowered every passing day, week and month" as long as he is president.

To be fair, base effects and moderating commodity prices will push down inflation moving forward. The IMF WEO projects inflation of 73.5% by year-end, 36.9% by end-2023, and 21.4% by end-2024, while the CBRT’s latest inflation survey points to inflation of 37.3% a year from now and 21.2% in two years and the two-year breakeven rate implies a 34% average over that period. Still, even on a forward-looking basis, the real rate is alarmingly negative from a historical or cross-country perspective.

Markets, however, have collectively yawned, with the TRY down just 0.1% at the time of writing, just barely underperforming the JP Morgan EM Currency Index’s 0.4% rise on the day. This is because the CBRT’s “liraization” policies have muddled the transmission mechanism so that the repo rate is no longer reflective of the CBRT’s policy stance, other than as a signalling mechanism (and on this front the message is clear and worrying, pointing to the desire for a larger and more prolonged loosening).

The chart below shows that lending rates and market rates on government debt diverged sharply from the policy rate during the cutting cycle that began in September 2021. However, a new regulatory measure introduced on 20 August forced banks charging above a certain threshold on commercial loans to park additional money at the CBRT, prompting an influx of demand for government securities and a sharp decline in the commercial lending rate (though the consumer lending rate has remained high). 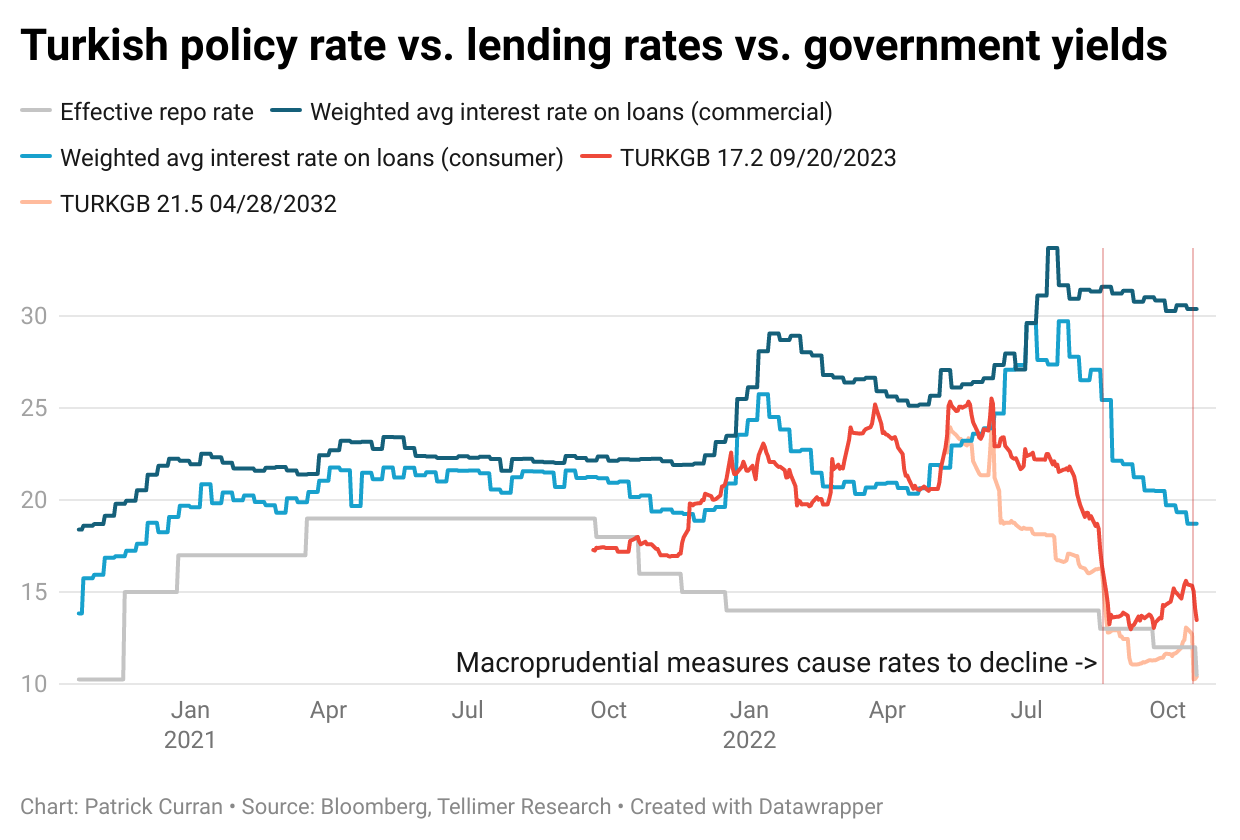 This was complemented on Tuesday by an increase of the securities maintenance ratio on FX deposits from 3% to 5%, inducing another sharp decline in government bond yields (by 232bps for 10yr and 187bps for 1yr bonds since cob on Monday, at the time of writing). Overall, macroprudential measures under the umbrella of the CBRT’s “liraization” strategy have emerged as the main instrument of monetary policy, superseding the repo rate in relevance.

While the “liraization” strategy may succeed in reducing interest rates and limiting TRY pressure in the near term, it is not a sustainable long-term policy (see our latest notes, here and here, and related reading for a more detailed explanation). If there is a crisis of confidence that prompts Turks to pull their deposits out of the banking system en masse, the strategy will backfire and the TRY will once again come under intense pressure.

We will continue to monitor the CBRT’s weekly bank balance sheet data for early signals of distress, though we acknowledge that a bank run could happen more suddenly than the data is able to provide a warning. In the meantime, we retain our Sell recommendation on the TRY and local currency government debt. 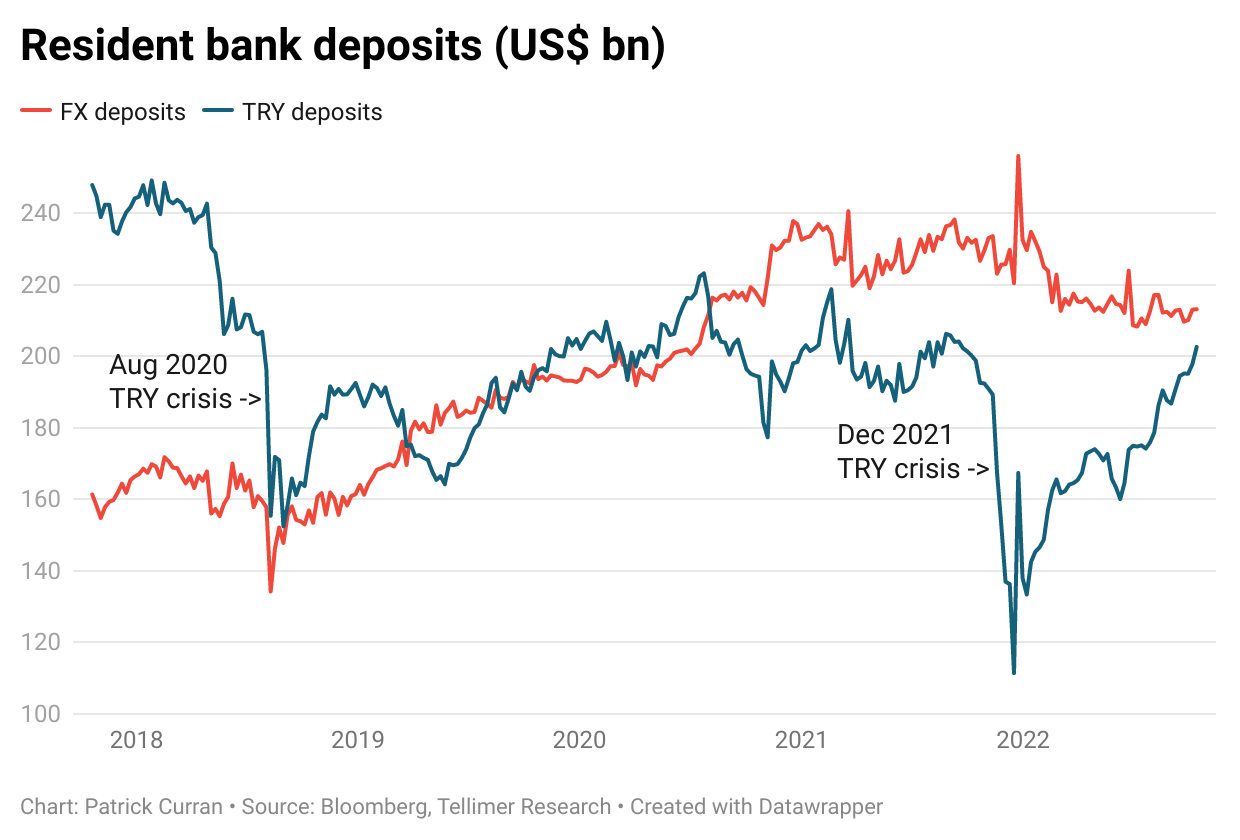