On Saturday, President Erdogan fired central bank governor Murat Uysal after just 16 months in the role. Uysal was appointed to head the Central Bank of the Republic of Turkey (CBRT) in July 2019 after Murat Çetinkaya was sacked, amid criticism from Erdogan over his refusal to cut interest rates, ushering in 1,575bps of rate cuts over the following year.

The reason for Uysal’s sacking is unclear, as he mostly complied with Erdogan’s preference for low interest rates. However, amid persistent TRY liquidity, the CBRT hiked the policy rate by 200bps in September and has raised the weighted average cost of funding by almost 700bps since July via backdoor tightening within the rate corridor.

If Uysal’s sacking signals Erdogan's dissatisfaction with recent tightening measures and desire for still more direct control over interest rate policy, it would be extremely negative for the battered TRY. However, if it instead signals dissatisfaction with Uysal’s failure to stem TRY depreciation and Erdogan's willingness to give the CBRT some leeway to tighten more aggressively, it could be a positive inflection point.

Markets have clearly adopted the latter view for the time being. After selling off 20% over the past three months and 30% ytd (the worst among major EM currencies), TRY has rebounded by c5% today, at the time of writing, its biggest gain in two years. 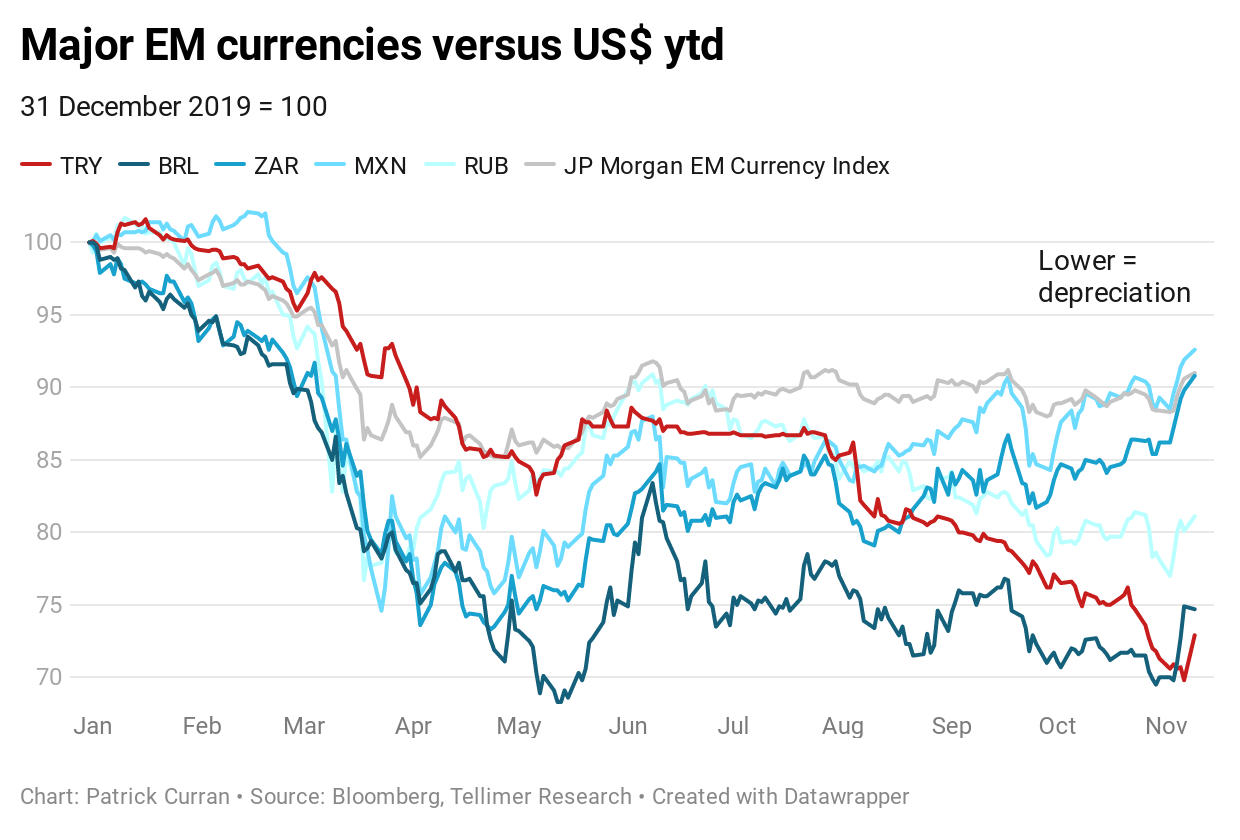 Uysal has been replaced by former finance minister Naci Agbal, who is respected by investors and seen as one of the remaining people in government who subscribes to orthodox economic thinking. Since 2018, Agbal has been the head of the presidential budget office, and has been vocally critical of Finance Minister Berat Albayrak’s unorthodox policymaking.

Following the changes at the CBRT on Saturday, Albayrak (who is also Erdogan’s son-in-law) added to the intrigue by announcing his resignation. It is still unclear if Erdogan will accept his resignation, which is purportedly for health reasons, or indeed whether the president prompted it. It is also unclear who will replace him, although the ruling party’s Central Executive Board will reportedly make an announcement on the matter later today.

Markets seem to think that these two events signal a shift away from the unorthodox policymaking that has caused TRY to crater over the course of the year. However, while Agbal is generally respected and seen as a mainstream thinker, he is also seen as a close ally of the president. If Erdogan hopes to exert pressure on Agbal to loosen policy, today’s TRY gains could quickly give way to further losses.

Indeed, Erdogan has not appeared to back off from his trademark opposition to high interest rates, saying last week that Turkey was fighting an economic war against “the devil’s triangle of interest and exchange rates and inflation.” We will soon get a signal of the state of monetary policy under Agbal when the CBRT holds its next monetary policy committee (MPC) meeting on 19 November. In Agbal’s first public statement as governor, he said that “the current situation and expectations will be reviewed, developments will be closely monitored” and that the CBRT would “decisively use all policy tools” to combat inflation.

This month’s MPC meeting, in our view, is a clear binary risk event for TRY. If Agbal hikes the repo rate, as markets seem to expect, then TRY could continue to strengthen (although this may be largely priced in after today’s moves). If, however, he continues to tighten policy by the back door or, even worse, if he fails to tighten policy at all or moves to lower interest rates, than the market view will swing back to pessimism over the lack of CBRT independence and, consequently, further TRY weakness. 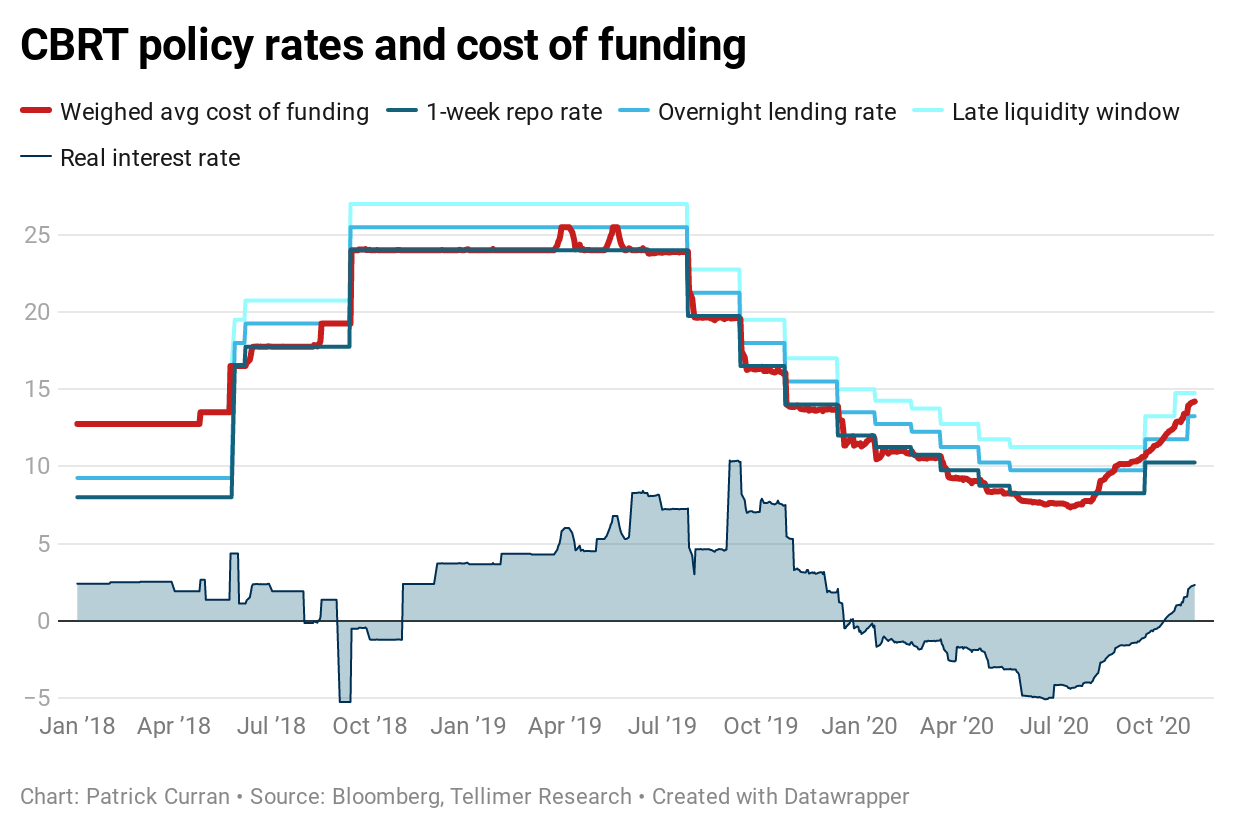 Inflation remained elevated at 11.9% yoy in October, but Johns Hopkins Professor Steve H. Hanke estimates it at 47% in the same period (see here). And, while net reserves recovered from US$16.6bn at the beginning of October to US$18.4bn by the end of the month, this is still meagre relative to short-term external debt exceeding US$180bn and outstanding FX swaps of US$58bn (see here), and after three months of narrowing the current account deficit widened sharply to US$4.6bn in August (versus -US$1.9bn in July and a US$3.3bn surplus in August 2019).

Erdogan’s erratic foreign policy has also pressured TRY, driven by Turkey’s involvement in the escalating conflict in Nagorno-Karabakh, among several others (see here). Turkey has been in a vicious cycle whereby Erdogan distracts from currency weakness and inflation by flexing his muscles abroad, which in turn generates further currency weakness. In addition, markets have been concerned about the risk of Turkey-US relations deteriorating under a Biden presidency, including elevated risk of sanctions (see here). It is unclear if this risk will materialise and how much is already priced in.

In our view, it is still too early to tell whether or not the leadership changes at the CBRT and finance ministry will materially improve Turkey’s economic outlook. We will have more clarity once Albayrak’s replacement is named, and, if his resignation turns out to be the first step in a wider house-cleaning exercise within Turkey’s economic leadership, than the government could begin to restore investor confidence.

If, however, the CBRT fails to hike the repo rate on 19 November and begin the process of normalising Turkey’s monetary policy framework, then today’s TRY appreciation will prove short-lived.