In a speech to ruling AK Party lawmakers in parliament today, President Erdogan offered his support for Turkey’s newly appointed central bank governor and finance minister. In response, the lira rallied by over 4% at the time of writing and has now appreciated by over 8% so far this week. 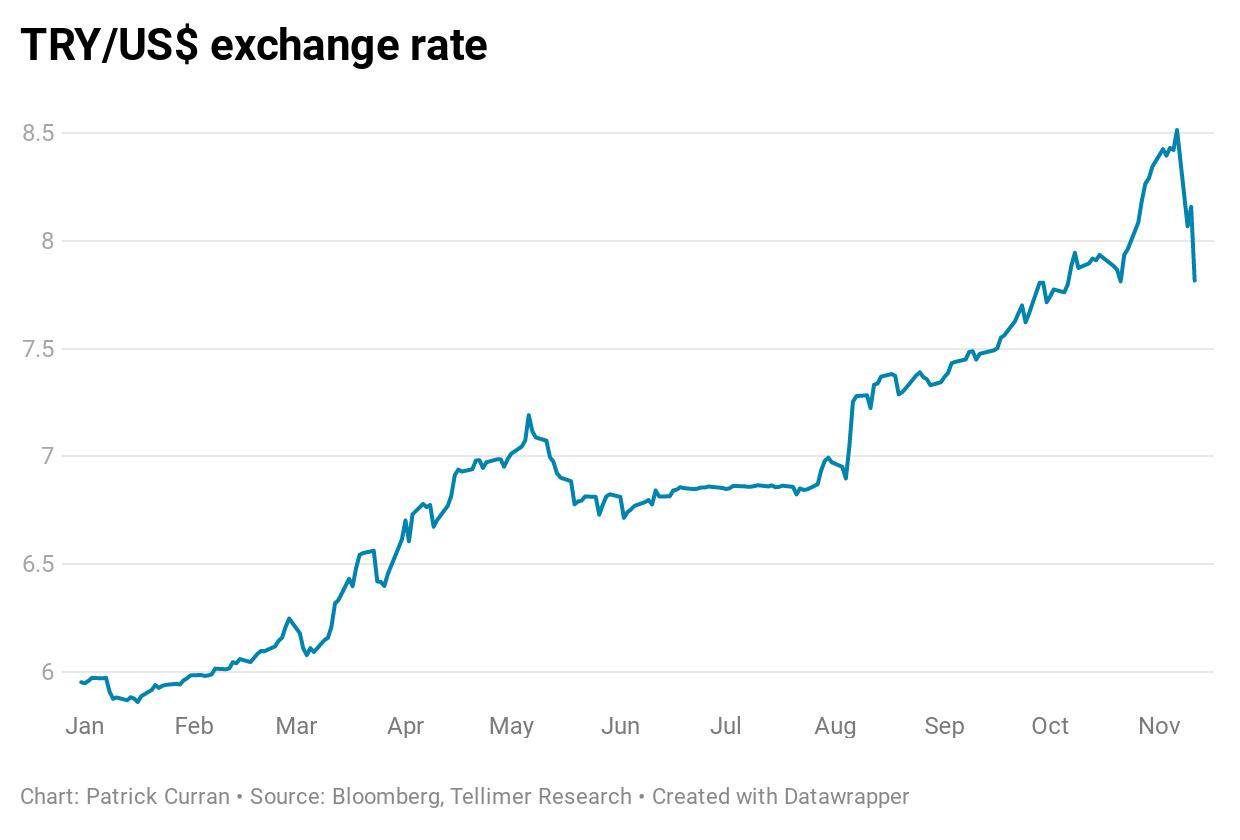 The speech came after the firing of central bank governor Murat Uysal on Saturday and the surprise resignation of finance minister Berat Albayrak on Sunday, which many investors saw as a signal of a shift towards more orthodox economic policy (see here for our initial take).

Erdogan appointed the widely respected Naci Ağbal as the new CBRT Governor on Saturday and former Deputy Prime Minister Lutfi Elvan as Finance Minister on Tuesday, after accepting Albayrak’s resignation. Elvan was most recently the head of parliament’s budget and planning commission and, like Ağbal, is seen as a relatively orthodox economic thinker.

Investors are hopeful that the appointments of Ağbal and Elvan signal a shift away from unorthodox policy under former finance minister Albayrak, during whose two-year tenure investor relations saw a sharp deterioration and whose policies caused investors to shun the lira even as the CBRT has wasted an estimated US$140bn over the past two years to support the currency.

While Ağbal may have disappointed some investors by shying away from an emergency hike after his appointment, he is reportedly in the process of purging Albayrak’s allies from the CBRT to shift policy in a more orthodox direction. Meanwhile, Elvan has said that he would pursue a market-friendly approach “based on international norms, transparency, predictability and accountability.”

Despite their market-friendly views, we were initially sceptical that Erdogan would give them free rein to shift towards more orthodox policy (see here). However, his speech today has alleviated some of those concerns, with Erdogan saying that it is the central bank’s job to determine and implement “transparent and credible” policies to curb inflation and that “I will stand by them in every step they take.” He added that “We will not hesitate to apply the right prescriptions even if it is painful,” and said Turkey would organise meetings with international investors to restore confidence in the lira.

As a tangible signal of the impending policy shift, the banking regulator eased restrictions on derivative transactions between local banks and foreign investors, which were put in place earlier this year to make it harder for foreigners to bet against the lira. The move will allow foreign investors to hold more liras through dollar swaps, and is the second time restrictions have been eased since late September.

However, as we highlighted in our previous note, Turkey is not out of the woods yet. Despite Erdogan’s apparent willingness to give policymakers more space to make decisions, he reiterated his view that high interest rates are the root cause of inflation. And, despite the potential for improved policy credibility, Fitch said that the second change in less than two years to the central bank's leadership highlights its limited independence from political pressure.

The likelihood of tighter policy at the 19 November MPC meeting has certainly increased after today’s speech, but, if interest rate hikes prove to be less aggressive than anticipated by markets or if Erdogan reverses course and prevents further hikes in the months that follow, then this week’s lira appreciation could give way to continued weakness.