The CBRT surprised by cutting its one-week repo rate by 100bps today to 13%, with all 21 analysts surveyed by Bloomberg predicting an unchanged policy rate. With inflation running just shy of 80%yoy in July, it would be charitable to call this decision anything other than dangerous and irresponsible. It pushed the real policy rate to a foreboding -66.6%, or to a still alarming -29% based on 12-month inflation expectations from the CBRT’s survey or -17% based on 2-year breakeven inflation. 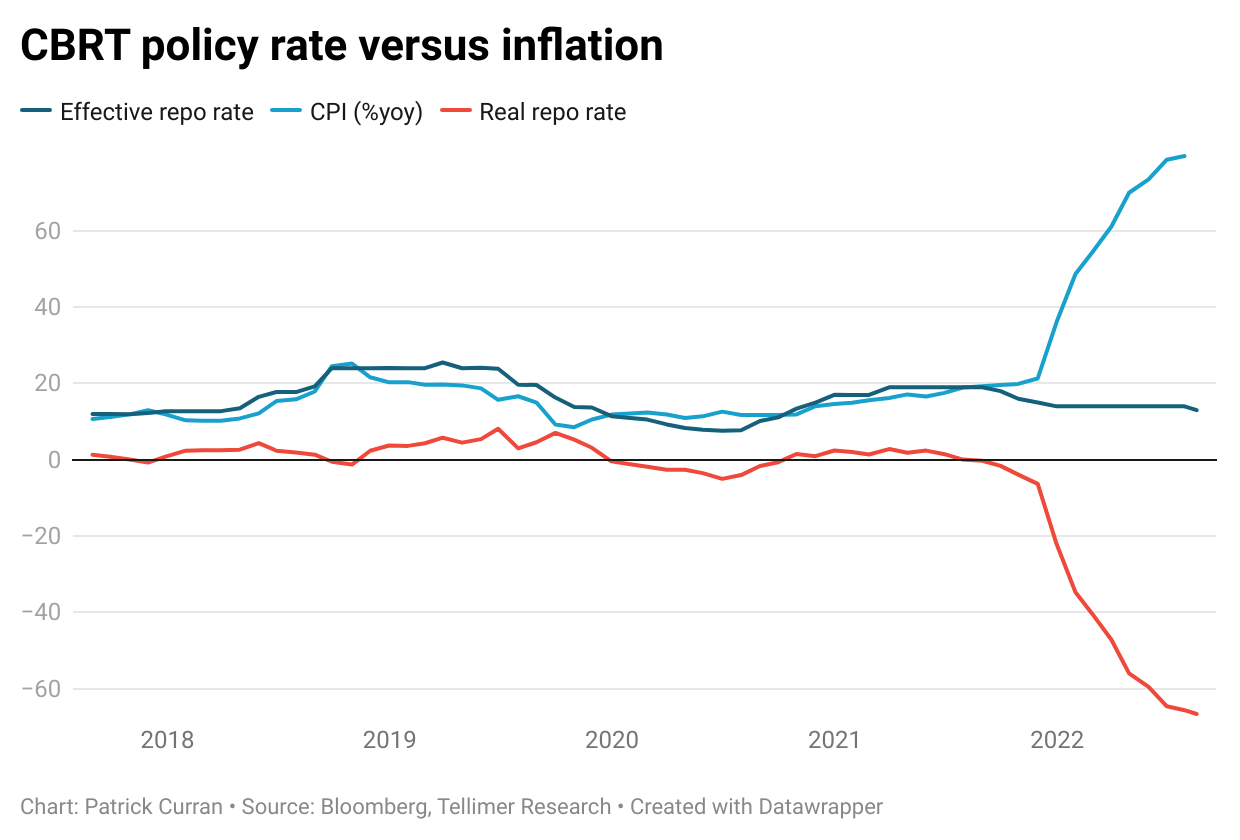 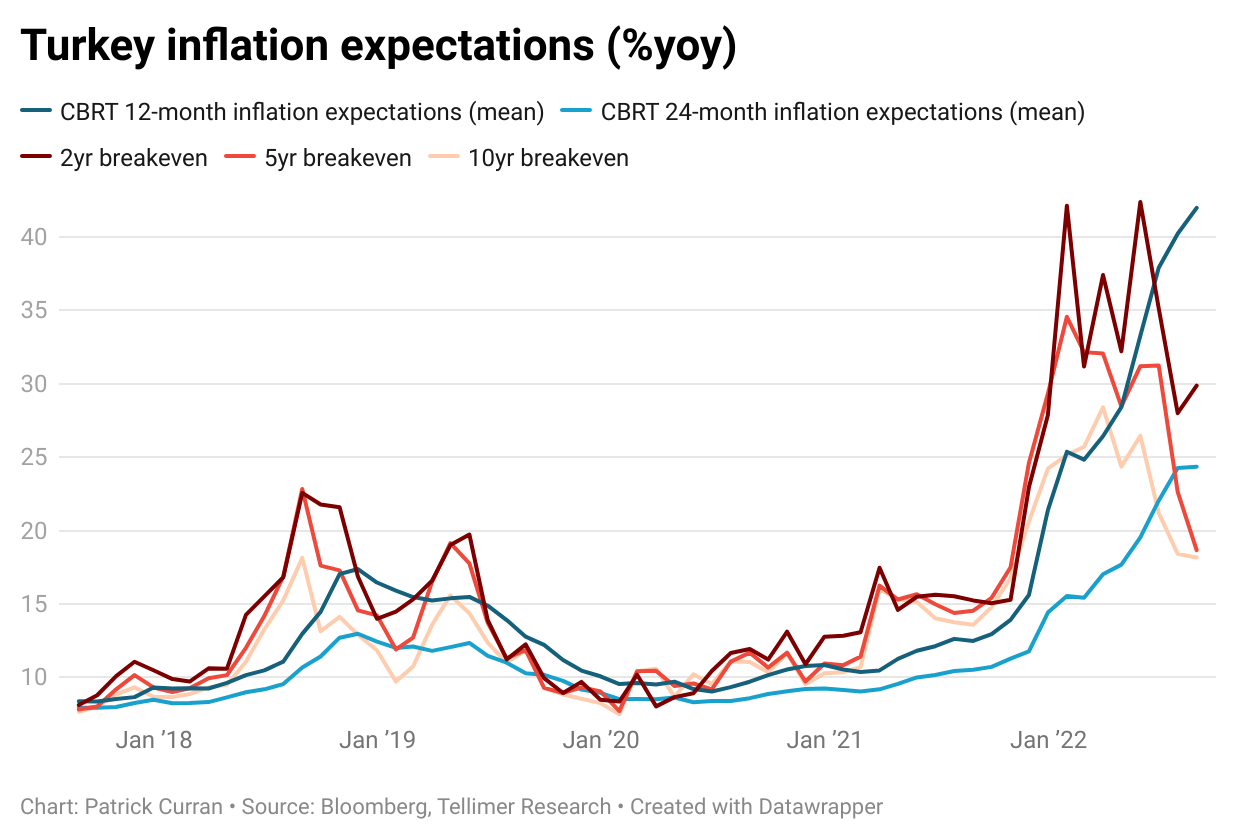 While the decision lacks any economic rationale, the MPC statement said that “The Committee expects disinflation process to start on the back of measures taken” and that “It is important that financial conditions remain supportive to preserve the growth momentum.” The main policy focus continues to be “encouraging permanent and strengthened liraisation”, with the recent slew of policy actions to this end summarised in Table 1.1 of last month’s inflation report.

The irony of President Erdogan's obsession with low rates is that lending rates have continued to rise since the beginning of the current cutting cycle, achieving a worst of both worlds outcome. And while the rate of dollarisation has stabilised around 55% on the back of Turkey's liraisation policies, surging house prices (+160% yoy in June) and non-monetary gold imports (averaging over US$1.3bn per month in May and June from US$260mn in the same period last year) point to waning confidence in the lira. 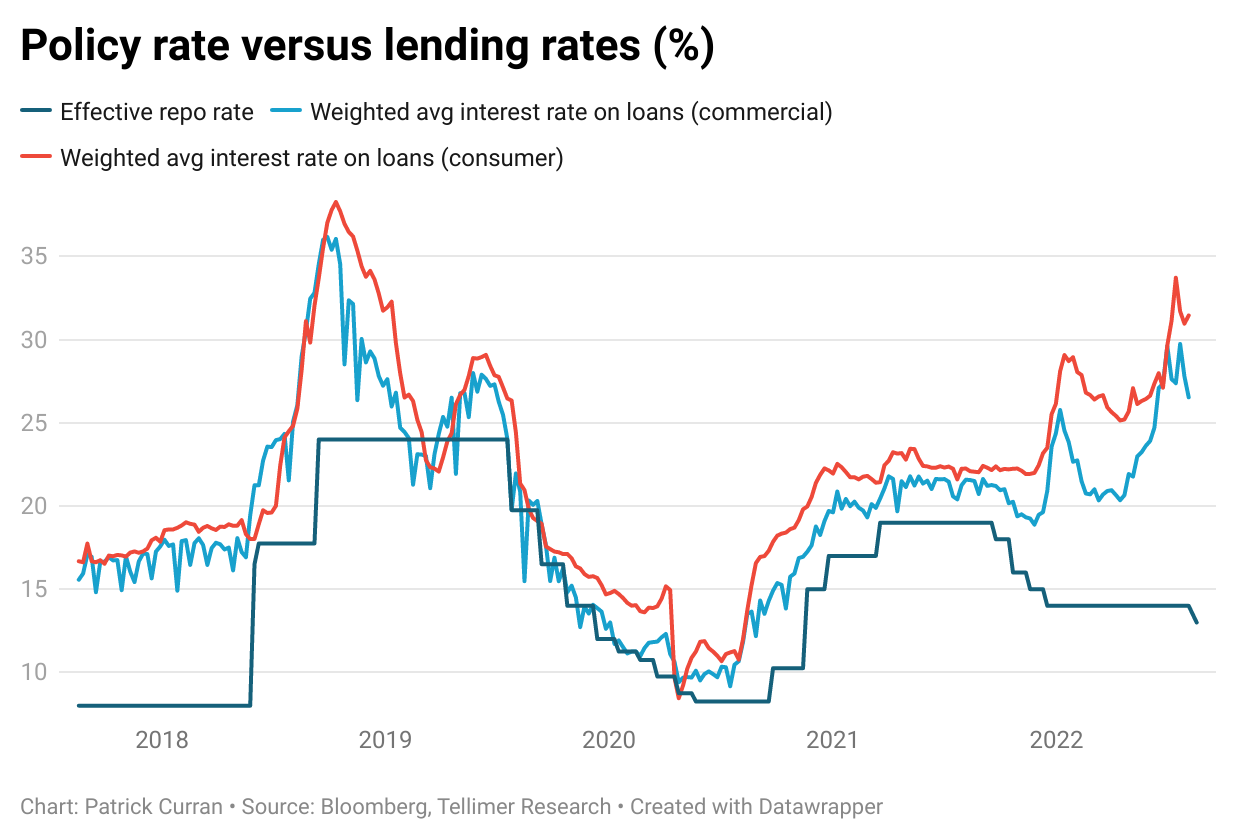 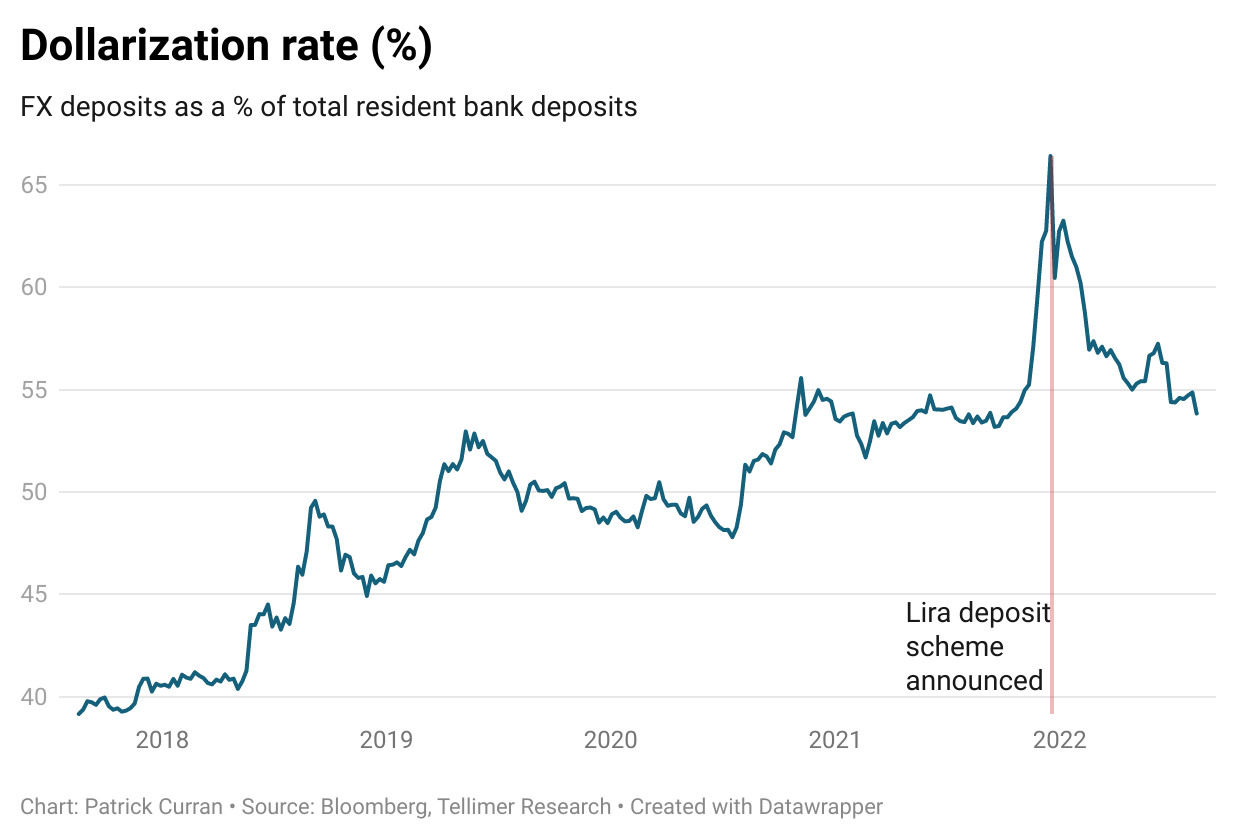 Net reserves have doubled to nearly US$12bn from a perilously low US$6bn in early July, but are still around negative US$49bn once swaps of US$61bn are factored out. While the current account has widened sharply to US$32bn in H1 22 from US$13bn in H1 21, US$28bn of the deterioration was due to higher net energy and gold imports, with the non-energy non-gold current account actually improving by US$9bn. Both the headline and non-energy non-gold balances have also improved sequentially in Q1.

However, currency intervention by the CBRT (which Bloomberg Intelligence recently estimated at US$66bn YTD) has prevented this from translating into higher reserves, with official reserve assets falling by US$10bn over the first seven months of the year. Without this intervention, there is no telling how much more weakness the lira would have sustained (it is already down 26.5% YTD, exceeded only by the Sri Lankan Rupee, Ghanaian Cedi and Laotian Kip among emerging market currencies globally). 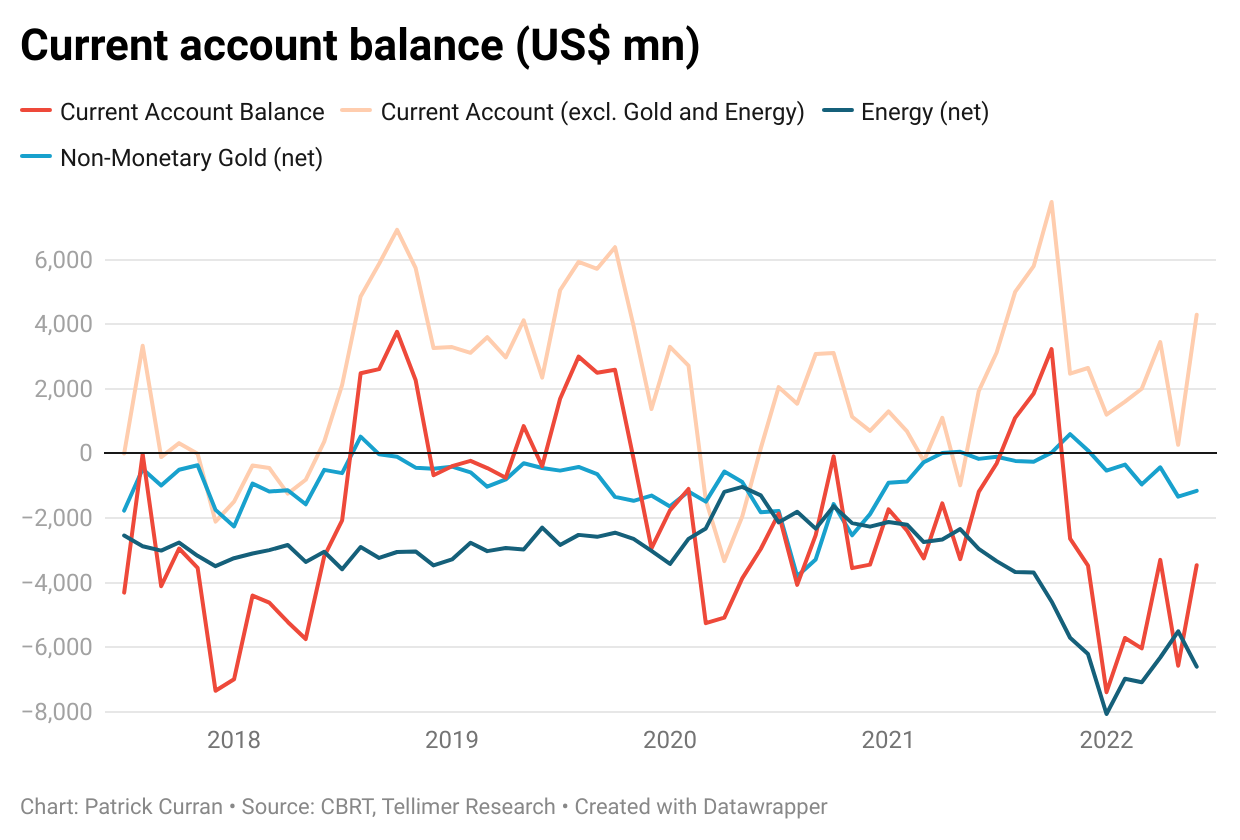 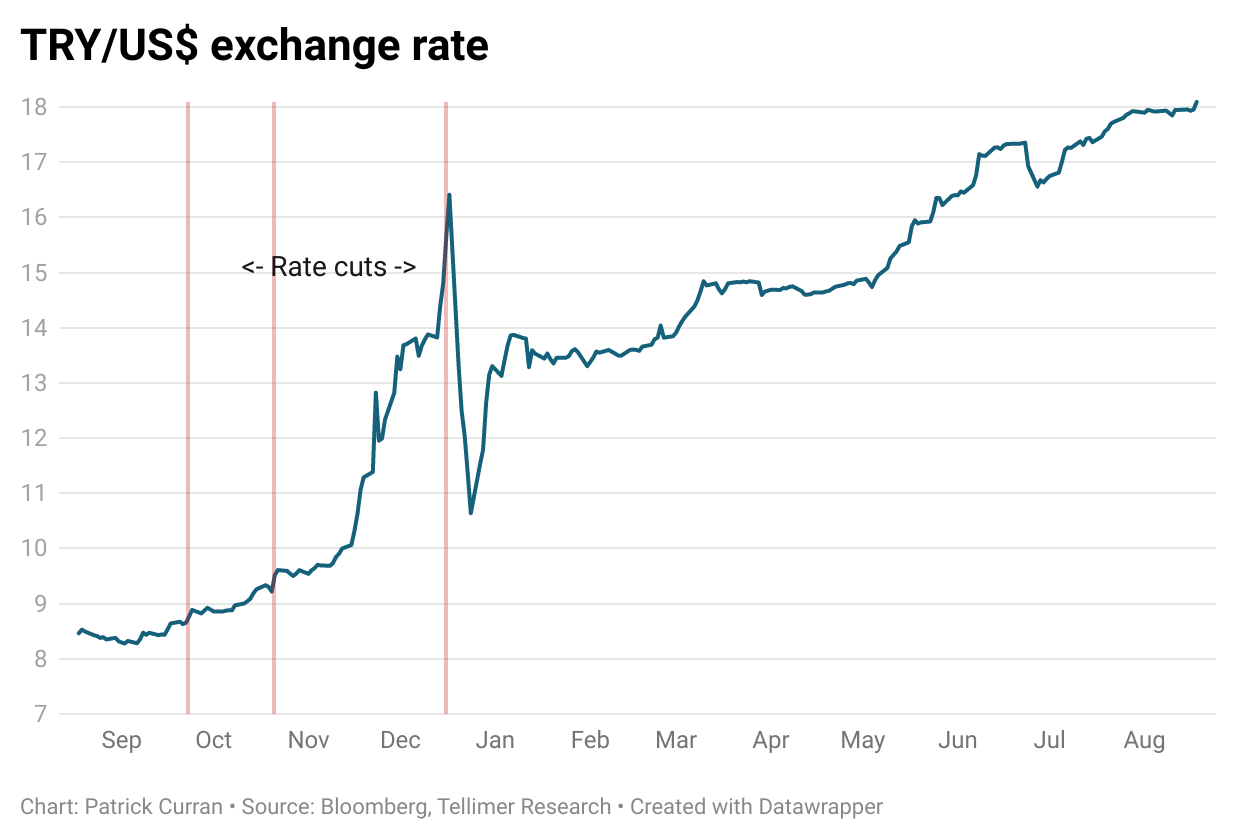 Today’s decision will exacerbate pressure on the lira, with the TRY down 0.8% on the day at the time of writing. The most recent Bloomberg survey showed a median estimate of 19/US$ for the lira by year-end, another 5% off from current pricing. But with today's surprise rate cut and the lira surpassing the psychological threshold of 18/US$, it is likely to depreciate beyond this level in the coming months without an even more unsustainable (and wasteful) boost in currency intervention by the CBRT.

Further, today's decision will undermine Turkey’s disinflation process. While the CBRT’s inflation survey shows expectations for inflation to halve over the next 12 months to just over 40%, the resumption of rate cuts could fuel a self-reinforcing cycle of higher expectations and consequently stickier inflation. As such, we expect the disinflation process to be slow and painful, and for the end point to be inflation that is multiples above the CBRT’s 5% target (10-year breakevens are over 18%, for illustration).

Perhaps most importantly, today's rate cut proves that the CBRT has been politically captured by Erdogan and his unorthodox acolytes and reinforces our earlier view that a policy reversal is only likely in the event of a severe and sustained currency crisis. With the TRY already down over 53% yoy versus the 49% seen in the year before the 2018 policy reversal and 33% leading up to the 2020 reversal, we think that bar has risen.

The question is how much the lira will have to sink before Erdogan sees reason, or if a base effects and commodity driven decline in inflation will simply encourage him to double down regardless of the impact on the lira (and his 2023 election prospects).

Against this backdrop, we maintain our Sell recommendation on the TRY and TRY-denominated government debt.

Note: See here for a more thorough illustration of Turkey’s inflation and balance of payments difficulties in charts.