On the back foot in Syria and Libya

Turkey has suffered significant casualties (at least 33 deaths, around 50 wounded) near Idlib in north-west Syria, following the airstrikes by Russian-backed Syrian forces on 27 February. Total deaths among the 10,000 Turkish troops stationed (and encircled) in north-west Syria near Idlib now exceed over 50 since the start of the year.

Turkey and Russia are on opposite sides in Syria and Libya and, in both theatres, the proxy and direct conflict has escalated in recent months. 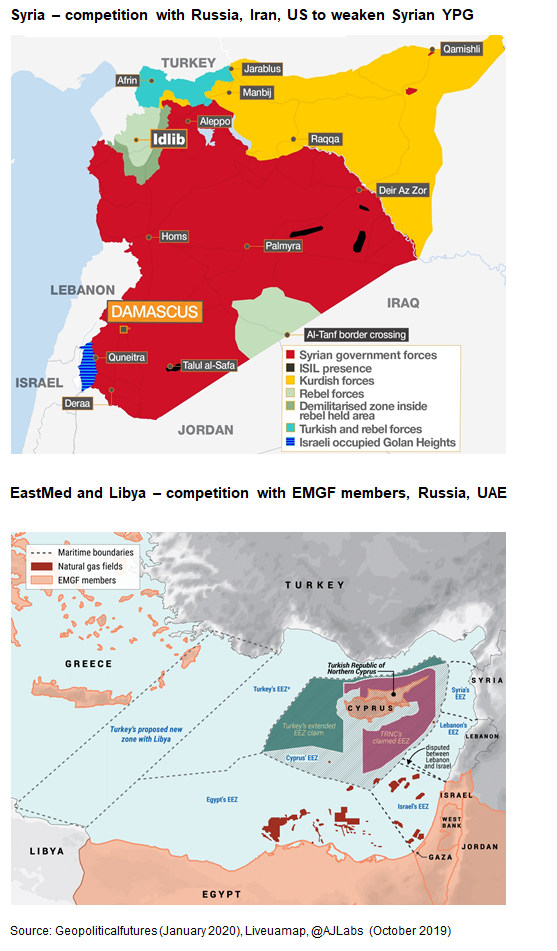 A hand overplayed by Turkey, at least for now

Turkey's response to the airstrike in Idlib, similar to the escalation following the shooting down of a Russian plane in 2015, is to attempt to draw in the US (on the pretext of joint defence commitments under NATO and reducing cooperation in areas such as arms purchases and gas transit with Russia) and the EU (on the grounds of stemming the flow of refugees from Syria in to the EU, where immigration dominates the electoral agenda in each member state) to strengthen its position.

Similar to 2015, Turkey's efforts in this regard are very unlikely to result in direct military assistance.

To the degree that the US and the EU intervene on behalf of Turkey (eg via financial assistance or arms supplies) it will come at a cost to Turkey's room for manoeuvre in other areas; eg Turkish drilling in the East Mediterranean or cooperation with Russia on areas outside Syria and Libya (arms supply, Black Sea defence, Iran, central Asia, gas pipelines).

Arguably, it is inevitable that Turkey engages militarily outside its borders in an era where the US no longer acts as a singular global superpower in the manner of the post-Cold War period. But this comes with economic and domestic political (if there are significant casualties) costs. Although Turkey is likely to emerge ultimately as a geopolitical power of significance across a wide region, the process is going to be far from smooth given:

Turkey has returned to relatively high economic growth, achieving 5% real GDP growth in Q4 19. This follows the 12.75pp of interest rate cuts since mid-2019. Also, the current account has returned to a surplus following a collapse of imports.

But the vulnerability of this recovery is high. Inflation is still very high (12.15% inflation and a 9.75% policy rate imply a large negative real interest rate of 2.4%). And, with higher growth, at least for now, the current account deficit will likely open up (ie the correction has not been driven by an export pick up).

The escalation of costs associated with military activity in Syria (and Libya) increases this vulnerability of economic growth. Turkey's forecast 2020 fiscal deficit is 4.7%, according to the IMF. Its military expenditure in 2019 was 2.6%, a level not seen since 2010, after five consecutive annual increases. This metric is likely to continue rising and that is negative for the Turkish investment thesis. 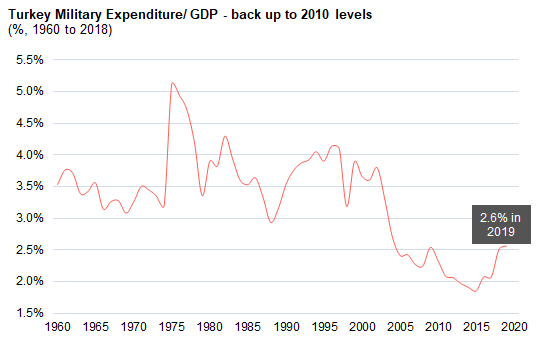 The real effective exchange rate is merely 60 compared with a 10-year average of 81; while the current account deficit has shrunk the vulnerability of the FX rate remains (FX reserves import cover is merely 3.8 months).