In the past three months, Turkey has committed itself militarily to international operations in Syria and Libya. Although the number of troops sent to Libya is unclear (and may be quite limited thus far), the signalling is clear. Turkey is increasingly adding the threat of military action and actual deployment to its foreign policy toolkit and this has repercussions for the investment debate.

The engagements in Syria and Libya are quite different. From a Turkish perspective, the Syria intervention could be understood (portrayed) in defensive terms as an effort in counter-terrorism, refugee relocation and the establishment of strategic depth in a contiguous country. However, the Libya intervention is a much more unequivocally offensive move: supporting an internationally recognised government in a non-contiguous country, a quid pro quo for receiving Libyan support for Turkish economic zone claims in the Eastern Mediterranean Sea.

The Libya intervention is key for Turkey's offshore gas exploration in the Eastern Mediterranean, its efforts to act as a conduit to Europe from the gas production of other countries with EastMed assets and for the economic value at stake for Turkish companies engaged in Libya's oil sector and, potentially, its ultimate civil reconstruction. This brings Turkey into competition with a number of other countries: Cyprus on territorial claims, members of the Eastern Mediterranean Gas Forum (Cyprus, Egypt, Greece, Israel, Italy, Jordan and the Palestinian Territories) on gas pipeline routes to Europe and the supporters of the Haftar forces, which oppose the Libyan government (eg Egypt, France, Russia and the UAE).

A more forthright Turkish foreign policy is perhaps inevitable, with EU membership a long-abandoned hope and with an increasingly volatile neighbourhood (given that the US is less willing to commit its military to defending long-standing partners and allies, Russia is more willing to use its military in the Mediterranean Sea region to provide a buffer against its vulnerabilities in the Black Sea and regional powers, Iran for example, continue to project power outside their borders as a means to preserve the regime within).

The consequences of a more forthright Turkish foreign policy for investors are intermittent risk of US and EU sanctions (although we think this is ultimately overblown, given Turkey's continuing strategic value to both) and higher military expenditure (which has been low as a percentage of GDP in recent decades and where any increase could exacerbate an already large fiscal deficit – which is forecast in the range of 5%, over the next few years, by the IMF).

In the short term, we expect the investment debate in Turkey to continue to be driven by the tension, on the one hand, between declining interest rates, looser liquidity and cheap equity valuations – the local Borsa Istanbul 100 index is on 6.7x 2020f PE (for 36% consensus aggregate earnings growth in local currency – and, on the other, the build-up of medium-term inflationary pressures (from Turkey's non-orthodox monetary policy assumption that high interest rates cause high inflation and vice-versa), FX rate pressure should global risk appetite contract and domestic political challenges should economic growth disappoint. Longer term, higher military costs (financial and political) will also be a factor in this debate. 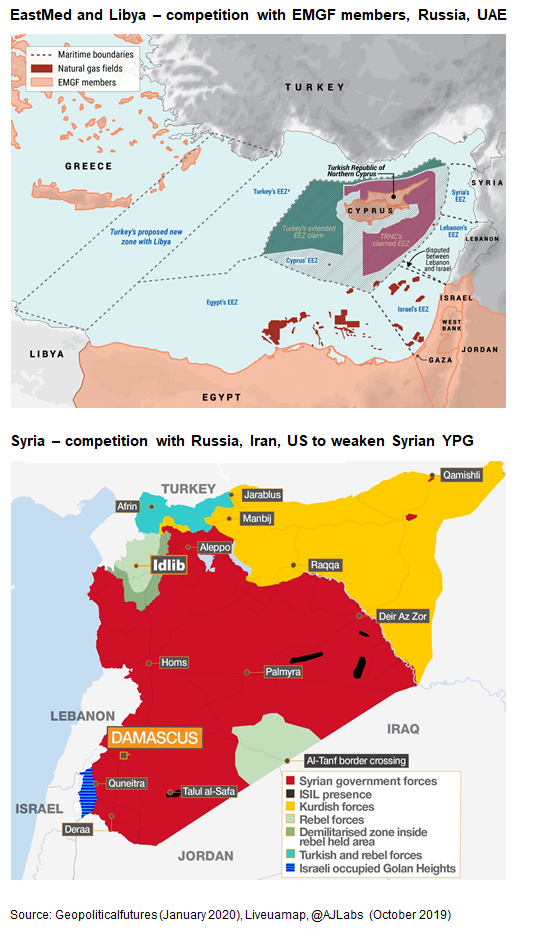 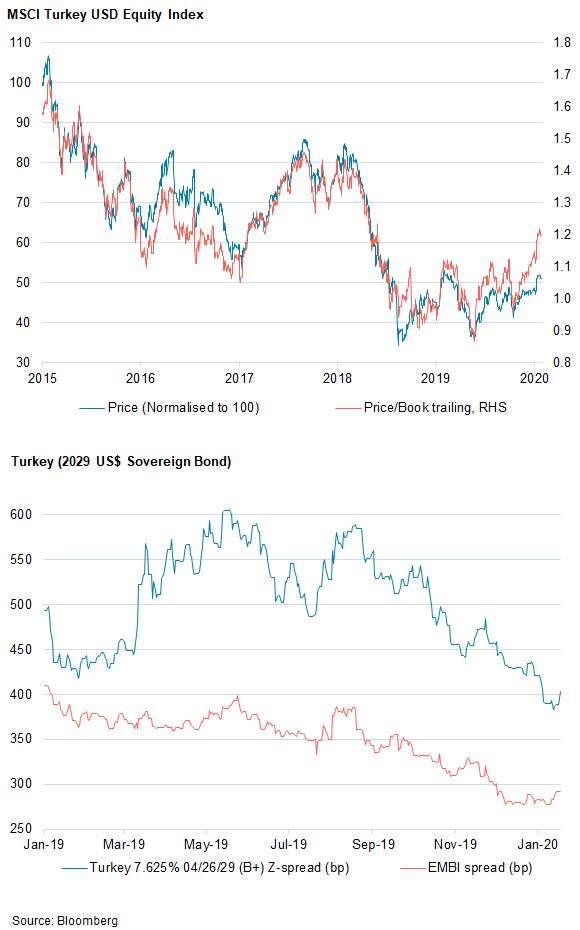