Turkey: Entrenchment of low rates spells trouble for the lira

The Turkish central bank (CBRT) held its one-week repo rate at 14% today, in line with the expectations of all 17 analysts surveyed by Bloomberg. The decision further entrenches the CBRT’s misguided view that rate hikes are not necessary to tame inflation, which rose from 54% to 61% yoy in March (and from 4.8% to 5.5% mom). This pushed the real policy rate to -47%, by far the lowest in our sample of 66 emerging and frontier markets (the next lowest is Sri Lanka, at -11%, and the median is -2.6%). 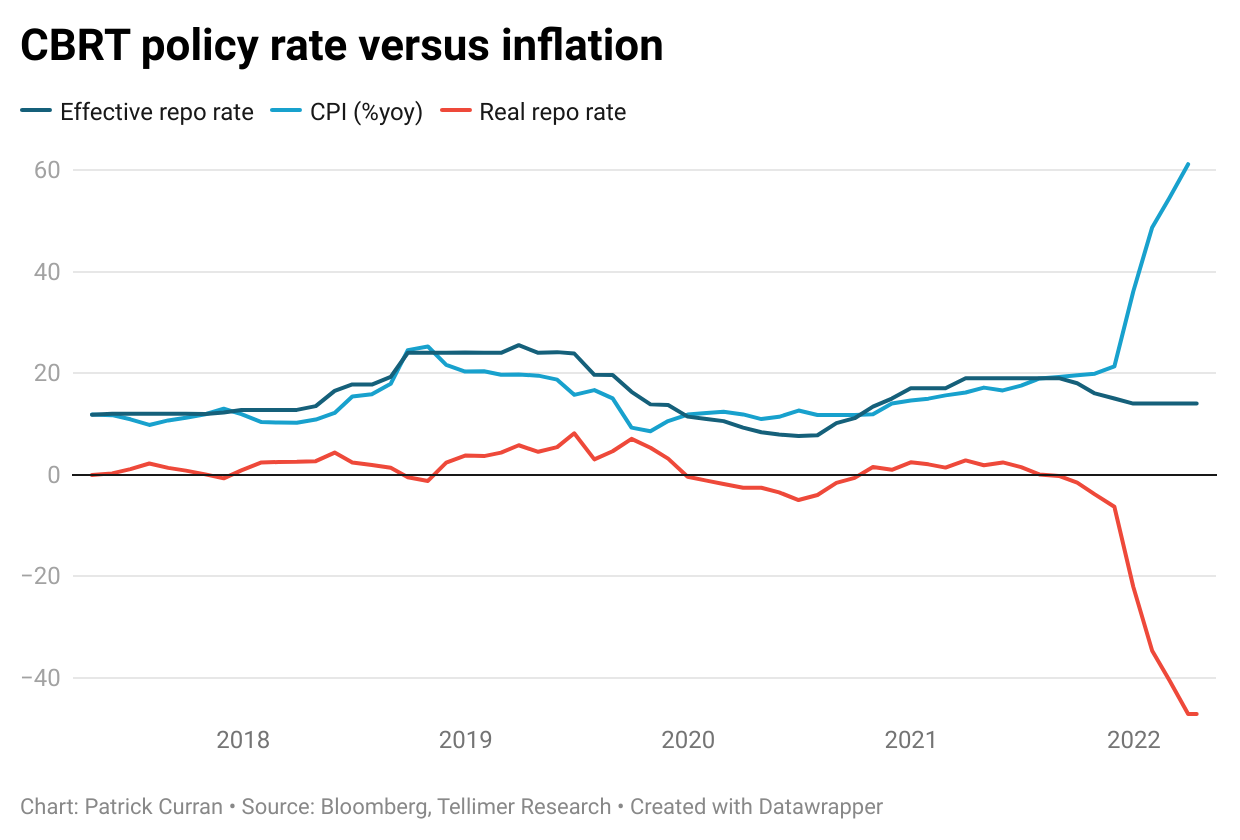 The statement continues to blame inflation on commodity prices and “temporary effects of pricing formations that are not supported by economic fundamentals,” and expects the disinflation process to start soon on the back of previous 'lira-isation' measures and base effects. However, with core inflation running at 48% yoy and 4.4% mom in March, and base effects not likely to exert a large impact until later in the year, upward pressures are broad-based and show no signs of moderating.

Despite the eye-watering rise in inflation, President Erdogan (and, by extension, the key policymakers at the Treasury and CBRT) is seemingly only becoming further entrenched in his resistance to rate hikes. Indeed, Finance Minister Nebati has been a vocal proponent of the current policy stance, saying recently that, while inflation above 60% is “a problem”, it is expected to fall to “reasonable levels” by year-end and that Turkey has been “released from the grip of interest rates".

This contrasts with the CBRT’s latest survey of market participants, which shows expected inflation of 46% by year-end and 28% a year from now (largely on base effects). Against this backdrop, rate hikes are urgently needed to tame inflation, prevent a more permanent anchoring of expectations in the double digits, and keep the lira from depreciating further (it is down 9% ytd, the seventh-worst among currencies tracked by Bloomberg).

Instead, the CBRT has continued to focus on its lira-isation strategy and other alternative measures to support the lira, including raising the threshold for conversion of export proceeds into liras from 25% to 40%, extending corporate tax breaks for companies that convert their FX to liras, and at least US$3bn of FX sales by state banks so far this month (adding to US$20bn of CBRT intervention in December, according to Goldman Sachs).

The question now is, what would it take for the CBRT to reverse its flawed policy stance and hike rates? Based on its sanguine inflation forecasts, it is likely that only a bona fide lira crisis would prompt it to reverse course. However, the key pain point is anyone’s guess (the lira has depreciated at an annualised rate of 35% so far this year, potentially enough to prompt a shift if sustained, but not necessarily).

Further, sustained depreciation of this magnitude could force the CBRT to make good on its promise to offset FX losses on the growing pile of FX-protected lira deposits (which have reached TRY695bn, or US$48bn), which could trigger a vicious cycle of inflation and currency depreciation as the CBRT is forced to print money and/or the Treasury is forced to expand its deficit to meet its promises.

Without a significant re-thinking of the CBRT’s policy framework, inflation will remain painfully high and the lira under threat. Unfortunately, there are as yet no signs that this desperately needed shift is underway, and it is likely that another currency crisis will be necessary to trigger it. Against this backdrop, we retain our Sell recommendation on TRY and local government debt.