Turkey: Crisis is a matter of 'when' rather than 'if'

Our conversations on Turkey may as well have been a copy and paste from the April meetings. Since then, the rate-cutting cycle has resumed and inflation has continued to climb, pushing the real policy rate to -73%, and the central bank (CBRT) has continued to double down on its unsustainable “liraisation” policies. Further, President Erdogan has promised to keep cutting the repo rate into the single digits and has outlined plans for a spending binge ahead of the June 2023 elections.

There seems to be consensus that the marginal impact of further rate cuts at this point is likely quite low, since the CBRT’s unorthodox policies have muddled the transmission mechanism. That said, the signalling effect is quite important, with the central bank cutting its policy rate by another 150bps last week to just 10.5% and signalling that another 150bps cut was likely at next month’s meeting before hitting pause on the current cutting cycle.

The sustainability of these policies comes down to what happens to the balance of payments and whether domestic confidence will remain high enough to prevent an exodus from the banking system. For now, there is no sign of significant deposit outflows from the banking system but there is a clear influx into real assets (with housing prices up 185% in August) and hedging via non-monetary gold imports (which averaged cUS$1.35bn in the six months to August from cUS$350m in the six months to February).

For now, Turkey can continue to muddle through with its liraisation policies. But it is unclear how long the balance of payments stability will persist, especially if energy prices stay high and/or errors & omissions begin to decline. Further, if the rollover rates for Turkish corporates begin to decline and/or a crisis of confidence causes a mass exodus of FX deposits from the Turkish banking system, then the temporary calm we have seen could give way to a severe crisis.

Indeed, the biggest revision relative to the April 2022 WEO is the Fund’s current account projections, with the deficit projected to average 2.6% of GDP over the medium term versus 0.8-1.6% of GDP in April. This, in turn, will pass through to continued exchange rate depreciation, with an implied exchange rate of 23.6/US$ on average in 2023 (>20% below the current level) and projected annual depreciation of 10% per year thereafter through 2027, based on our own calculations from the WEO data.

On the other end of the spectrum, there was still a relatively sanguine attitude towards the fiscal. While the tiny US$2.5bn budget deficit seen over the first nine months of the year is likely to give way to a much wider deficit in the last quarter of the year as Erdogan’s pre-election stimulus leads to a backloaded spike in spending, the IMF is still projecting a budget deficit of just 4.2% of GDP on the year and public debt of just 37.5% by the end of 2022.

But, while there is room to accommodate Erdogan’s pre-election spending binge for the time being, the direction of travel for the budget is quite concerning. The IMF projects a deficit of c6% of GDP over the medium term, pushing public debt to 45% of GDP by 2027. While this is still low, it will get increasingly difficult for Turkey to finance its deficit in an environment of tight global financial conditions. Conversely, increased reliance on domestic financing risks crowding out the private sector.

Generally speaking, there seems to be broad consensus that the direction of travel in Turkey is unsustainable and that, on the current trajectory, a crisis is more a matter of when than if. However, few people seem to think that a crisis is imminent, and there was even some optimism that political change in the mid-2023 elections could lead to a course correction in H2 23 (although there is concern that the opposition’s ability to unwind Erdogan’s web of unorthodox policies could be limited). 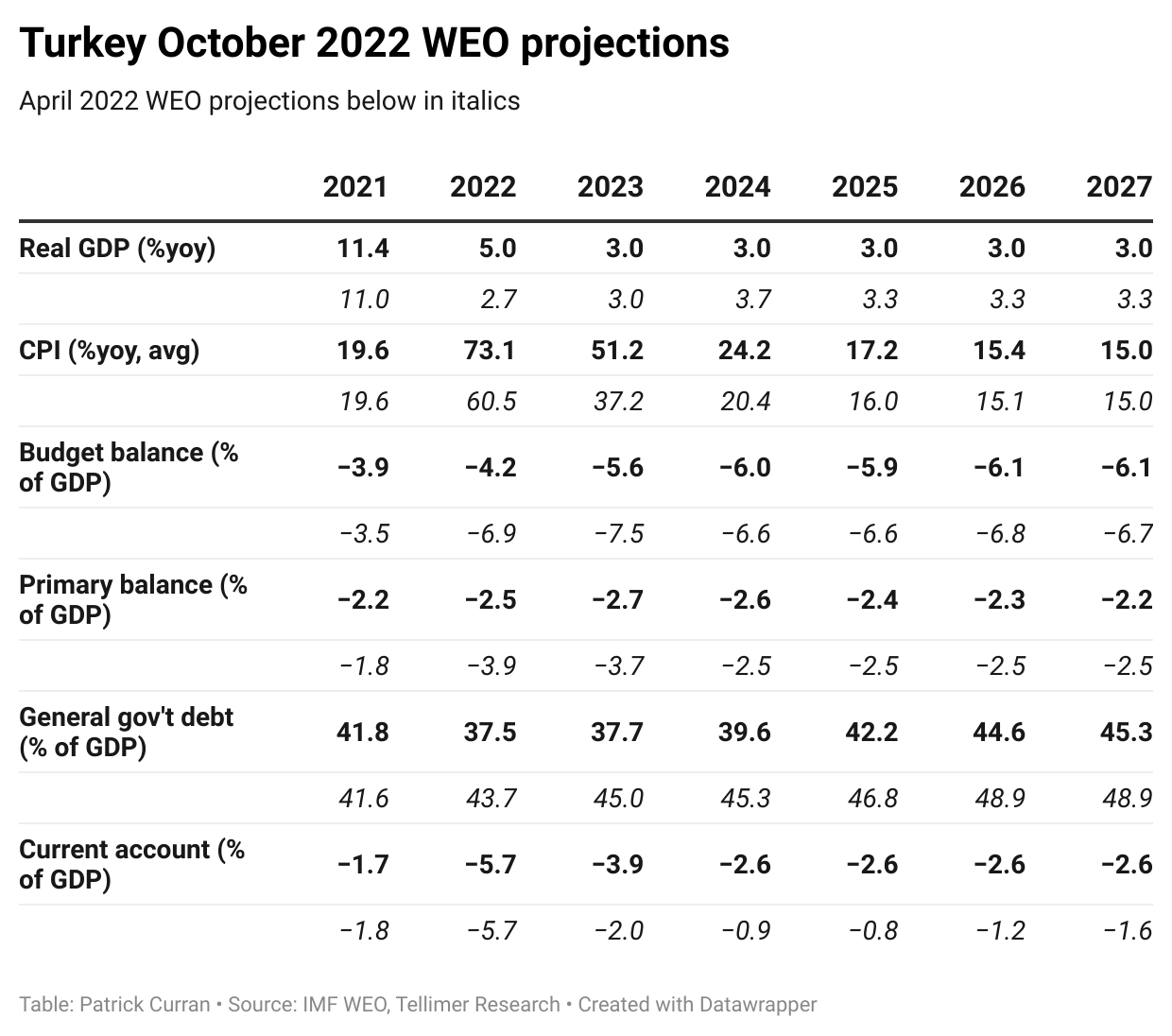