Late last night, just hours after meeting with CBRT Governor Sahap Kavcioglu, President Erdogan published a decree sacking three out of seven members of the monetary policy committee (MPC) – Ugur Namik Kucuk (a deputy governor who was the only MPC member to oppose last month’s rate cut), Semih Tumen (a deputy governor appointed in May who was recently rumoured as a potential replacement for Kavcioglu), and Abdullah Yavas (a longtime MPC member who resides in the US).

The list of Erdogan's 'victims' continues to grow, with the President now having fired three Governors since mid-2019 and six MPC members since March. The latest move signals and solidifies Erdogan's control over the CBRT, raising the likelihood of another rate cut at next Thursday's MPC meeting after last month’s 100bps cut, sending the real policy rate into negative territory even as inflation continues to rise and expectations become increasingly unanchored (18% repo rate versus 19.6% inflation). 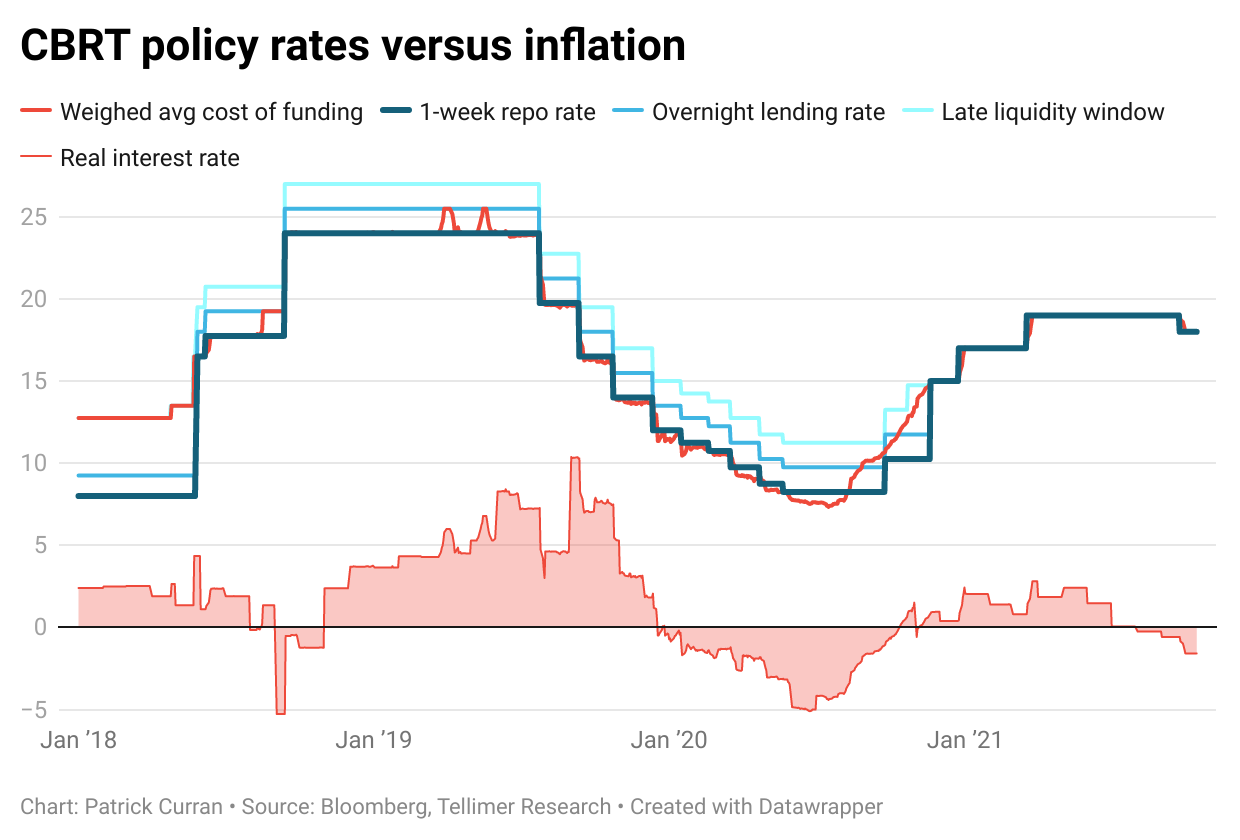 The rate cut and leadership shuffle have sent the TRY to a record low of 9.15/US$ at the time of writing, down 0.7% on the day and 5.5% since the cutting cycle began less than a month ago – the worst performing EM currency over that period. It is likely to depreciate further if the CBRT embarks on an aggressive cutting cycle, with the market now pricing 85bps of cuts over the next three months and 160bps of cuts over the next six months before giving way to 400bps of hikes over the next two years as currency weakness and high inflation likely force the CBRT to change course in what has become an all too familiar narrative. 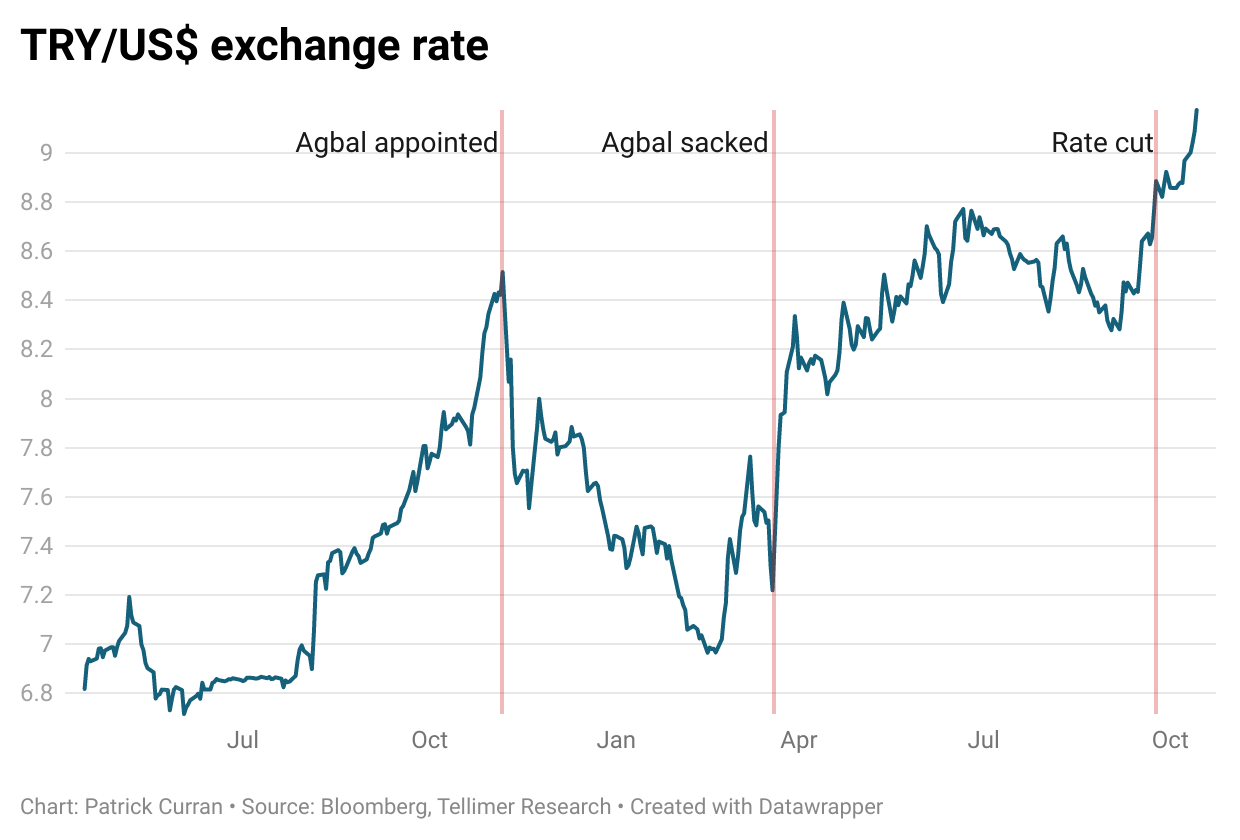 That said, a total collapse of the TRY may be prevented by Turkey’s improving BOP, with reserves rising sharply as the current account consolidates. The current account deficit has narrowed from US$26bn to US$14bn in 8 months through August, with the trade deficit down by US$6.5bn (exports +37% yoy, imports +25%) and services surplus up by US$6.5bn (exports +55%, imports +34%) on a strong recovery in tourism (with arrivals just one-third below pre-Covid levels over the past two months). This has pushed net (total) reserves to US$30bn (US$122bn) from a low of US$10bn (US$86bn) in April. 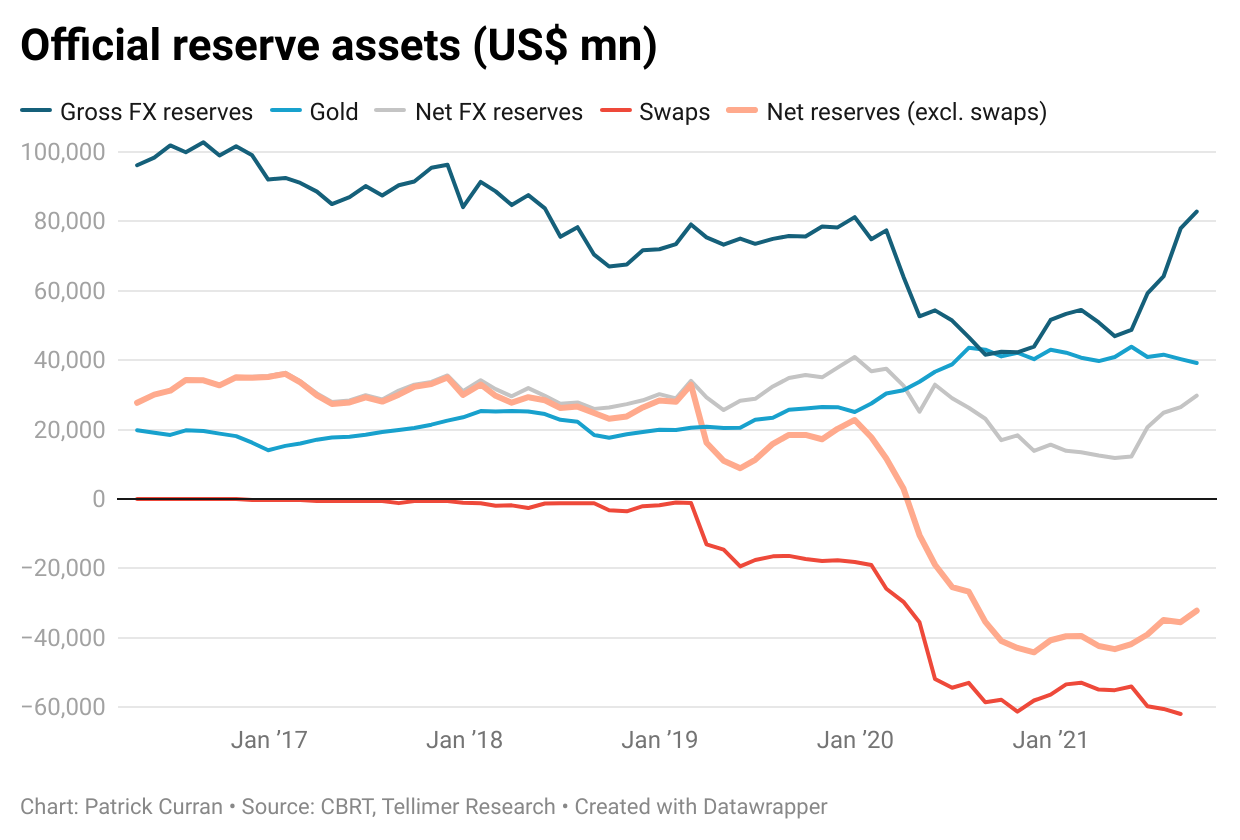 Set against the improving BOP backdrop is still-high short-term external debt (US$169bn) and high/rising swaps (US$62bn), with a heightened risk of rising dollarisation, gold imports, and foreign capital outflows (all of which have been contained in recent months, but with foreign outflows resuming since the rate cut on 23 September). 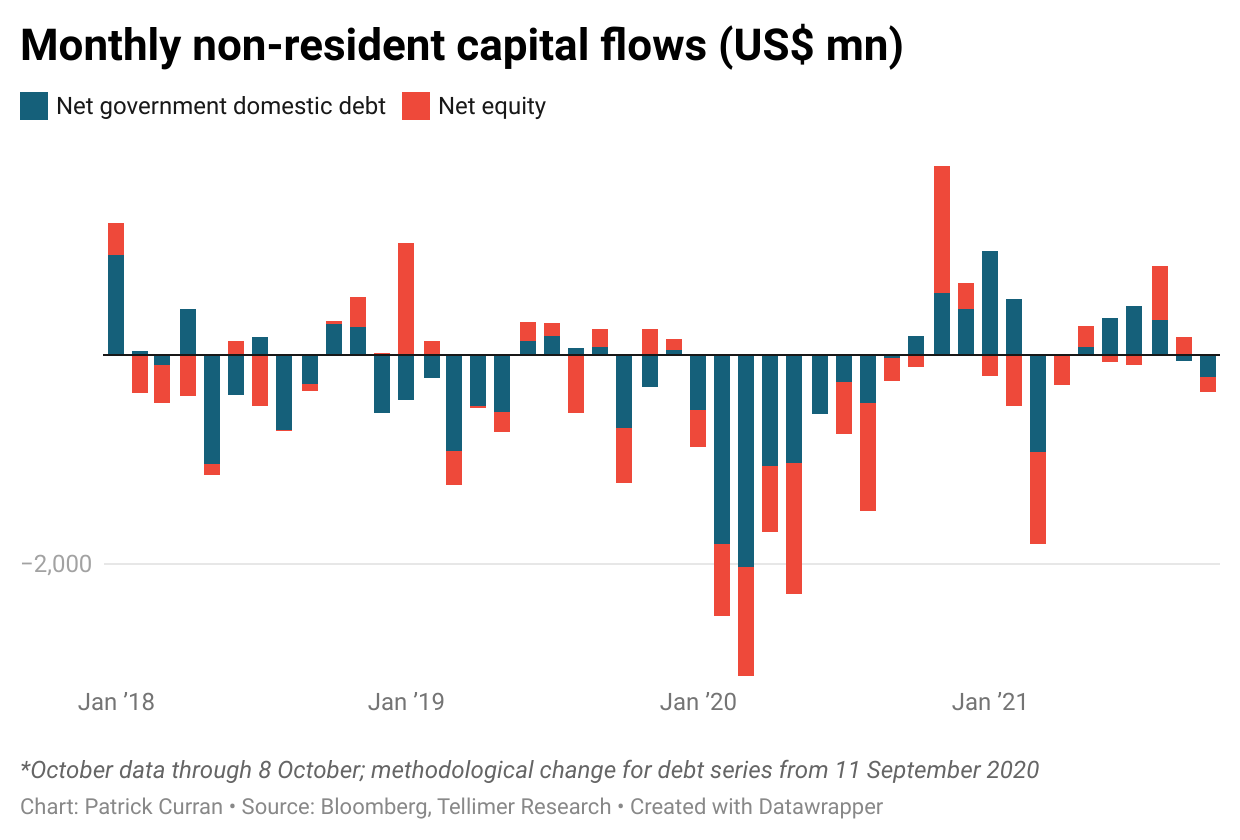 A premature and aggressive cutting cycle will cause further TRY depreciation, raise inflation expectations, and potentially push the credit impulse back into positive territory at a time when real growth is already accelerating above potential (estimated at 9% this year by the IMF). This will keep inflation well into double digits and make it difficult to rein in given a total lack of CBRT credibility.

With the latest leadership shuffle, President Erdogan has scored another astonishing own goal, repeating a pattern of policy mistakes that have allowed him to achieve his goal of lower interest rates in the short term while putting it firmly out of reach over the long term. Against this backdrop, we maintain our Sell recommendation on local currency government debt and the TRY.