Turkey's central bank (CBRT) opted to hold its one-week repo rate at 19% today, in line with the expectations of all 24 economists surveyed by Bloomberg. The statement reiterated that “The policy rate will continue to be determined at a level above inflation to maintain a strong disinflationary effect until strong indicators point to a permanent fall in inflation and the medium-term 5 percent target is reached.” 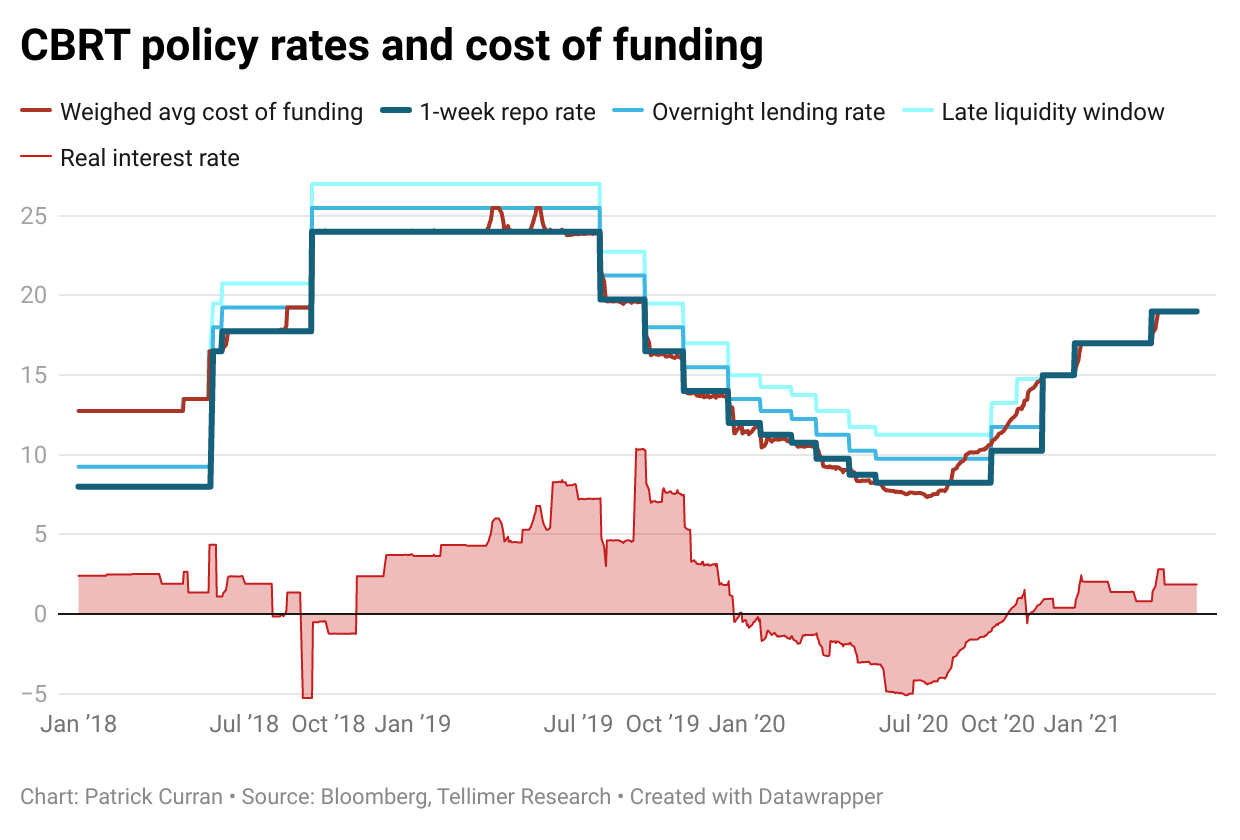 With inflation continuing to rise from 16.2% to 17.1% yoy in April and inflation expectations increasing, the CBRT was left with little choice but to hold, with the real policy rate dropping from 2.8% to 1.9% since the last monetary policy committee (MPC) meeting. However, with the CBRT pledging only to maintain positive real rates, that still leaves room for cuts moving into the second half of the year. 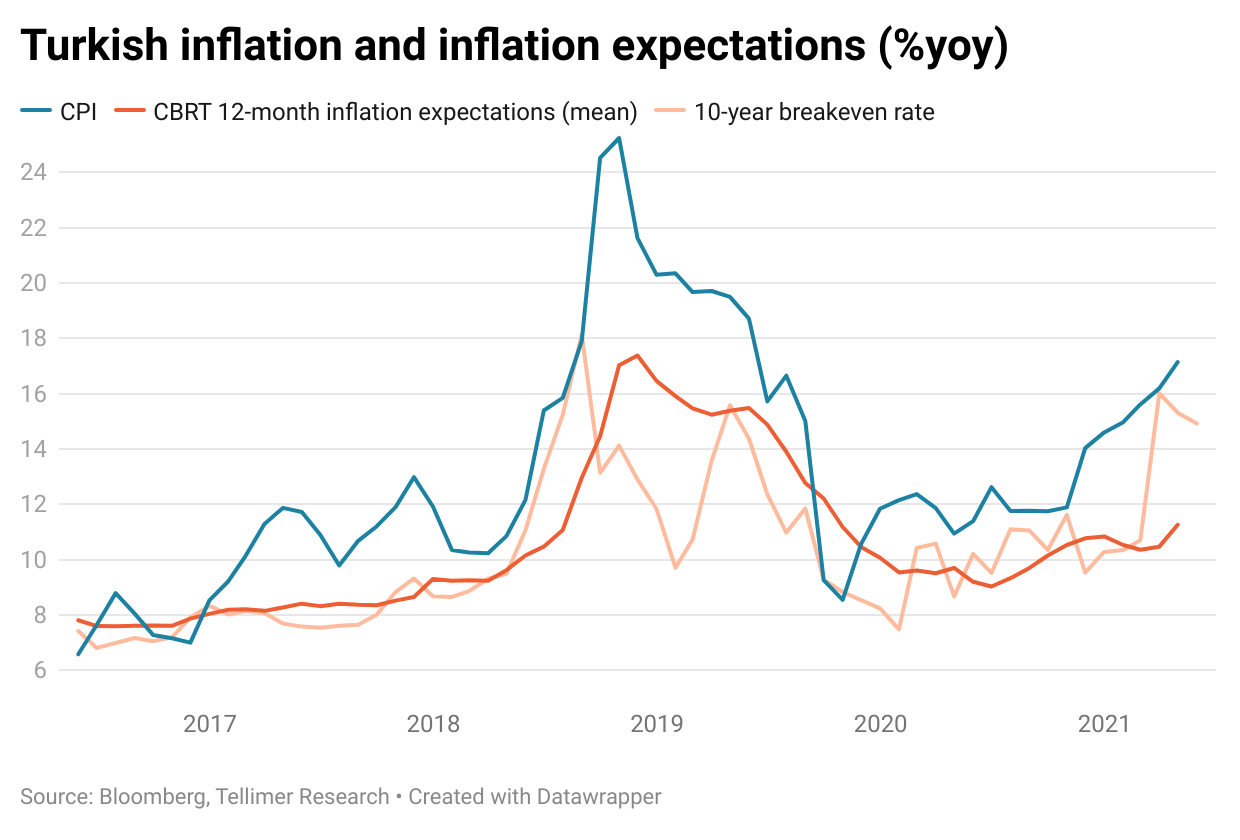 The Bank appears to think inflation has peaked, but its inflation forecasts could prove overly optimistic and, if it cuts rates prematurely based on its forecasts rather than waiting for an actual decrease in inflation, then it could undermine price and TRY stability. The CBRT’s growth outlook could also prove overly optimistic, especially in light of the three-week Covid lockdown currently underway (through 17 May).

In any case, the policy bias under new CBRT Governor Sahap Kavcioglu is clear. In an interview in April, Kavcioglu said that any rate hike would send a bad message for the real economy, asking "Who is happy with high interest rates?" Increases, therefore, appear to be off the table, and Kavcioglu will likely cut rates at the first opportunity (eg once inflation is seen to be trending downward).

TRY has traded flat at the time of writing following today’s MPC decision, and is now down over 13% since Kavcioglu was appointed as governor on 20 March. Depending on how soon and how sharply he embarks on the rate-cutting cycle, the lira could come under further pressure. On the other hand, there aren’t any obvious near-term catalysts for the appreciation of the exchange rate. 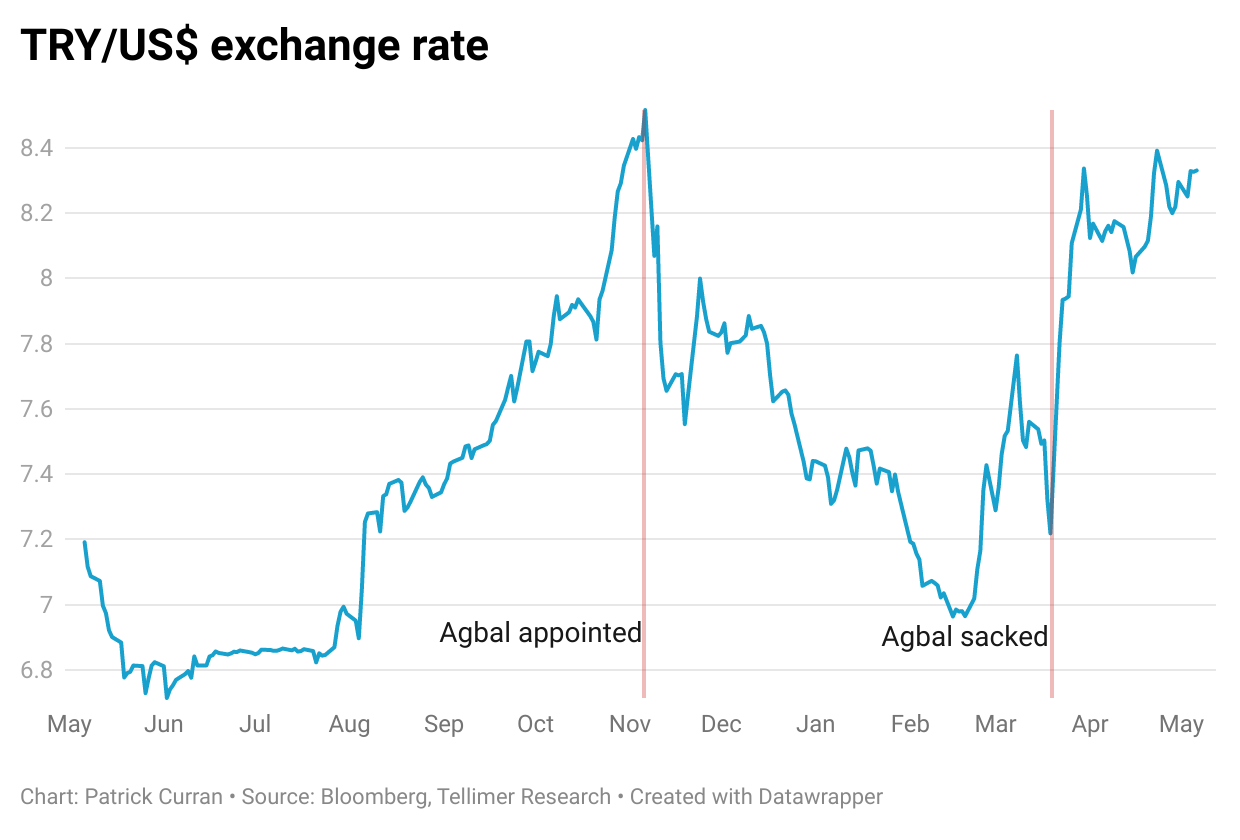 Interestingly, dollarisation of deposits has not accelerated since Kavcioglu’s appointment, with resident FX deposits actually declining by cUS$18bn since 19 March. However, this has taken place alongside a cUS$17bn decline in TRY deposits, keeping the dollarisation ratio steady at 53.5% and pointing to resident flight from the banking system rather than dollarisation as the latest response to the crisis of confidence sparked by former Governor Agbal’s removal. 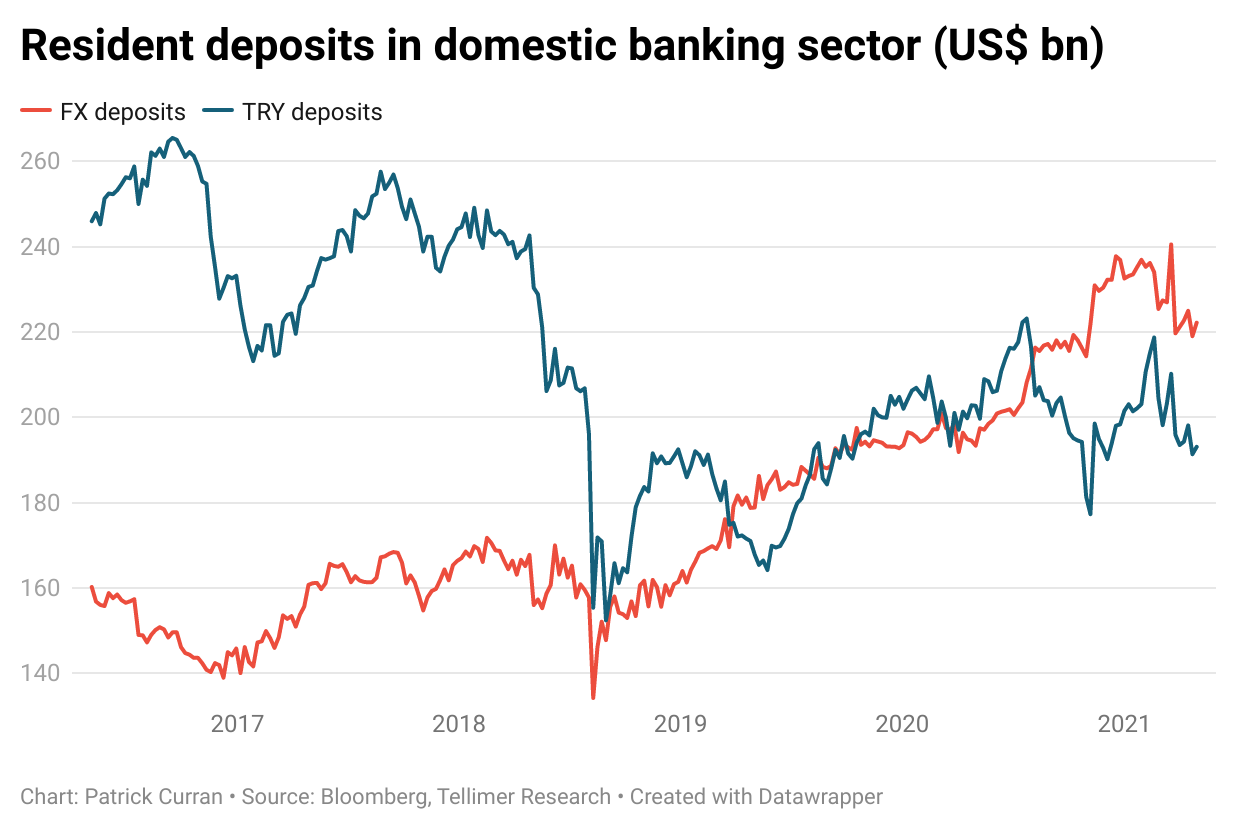 The MPC statement notes a “significant fall in gold imports” since October, which corresponds to Agbal’s appointment in November and subsequent shift towards tighter and more orthodox monetary policy. However, with gold import data only running through March, it remains to be seen if the downward trend will continue after Agbal’s sacking or if gold imports will rise again as residents’ confidence in TRY wanes and they seek to establish a hedge against TRY weakness. 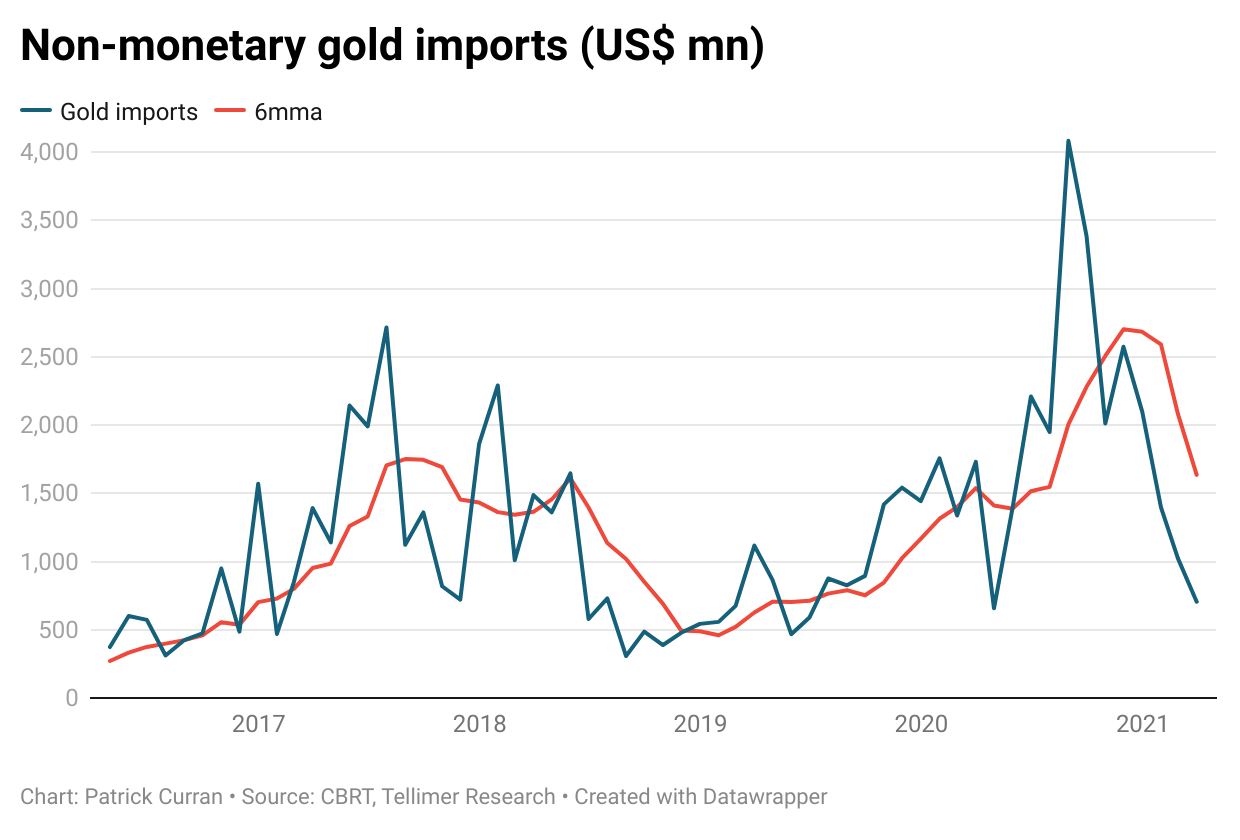 The statement also notes that “The decelerating impact of the monetary tightening on credit and domestic demand has begun to be observed.” While it is true that growth in monetary aggregates and private sector credit has slowed sharply since October, they were both still growing at c30% yoy as of March, highlighting the need to maintain a tight policy stance for some time to come. 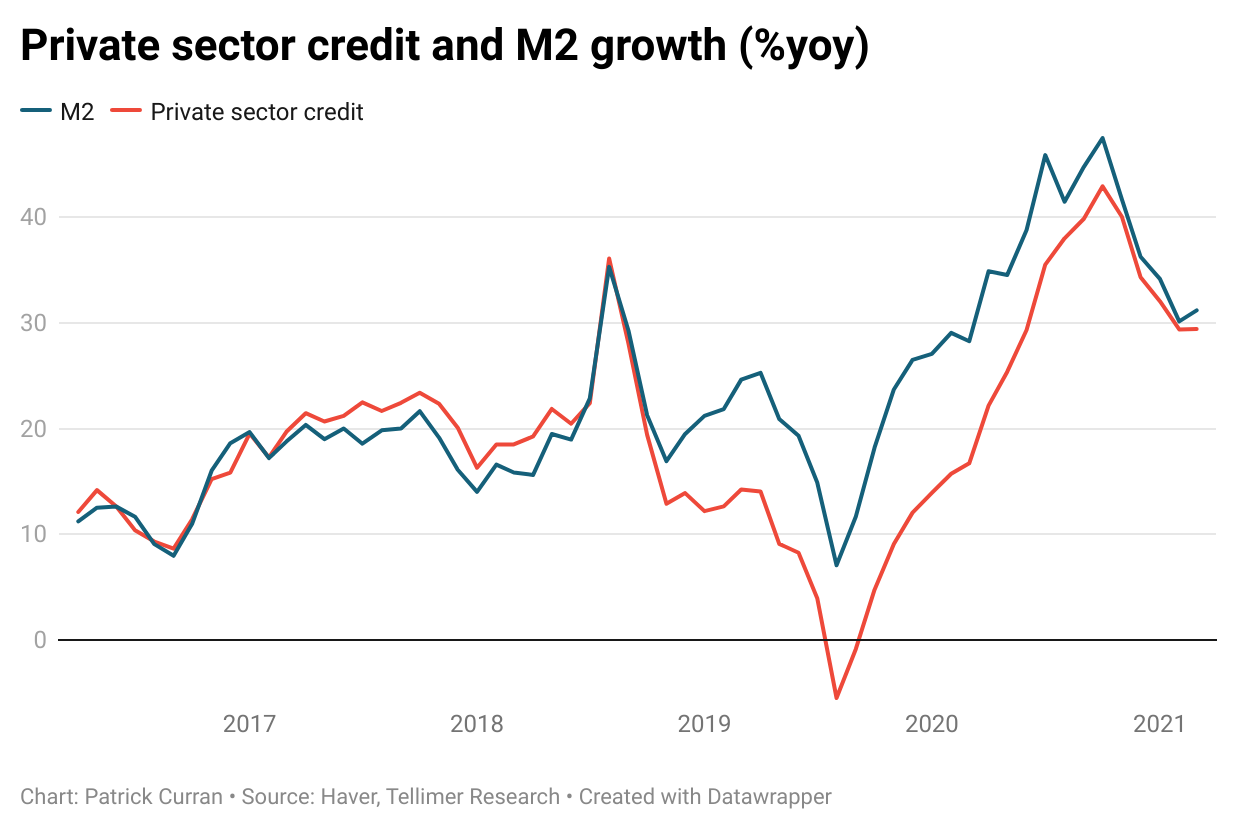 There is much progress to made on external rebalancing as well, with net reserves still at a minuscule US$12bn and an aggregate FX forward/swap book of US$55bn. Reserves have become a major political issue lately, with the opposition CHP recently posting billboards (subsequently taken down by the government) asking “Where is the US$128bn?”, referring to the money allegedly spent during the two-year tenure of President Erdogan’s son-in-law Berat Albayrak as finance minister in a failed attempt to defend TRY. 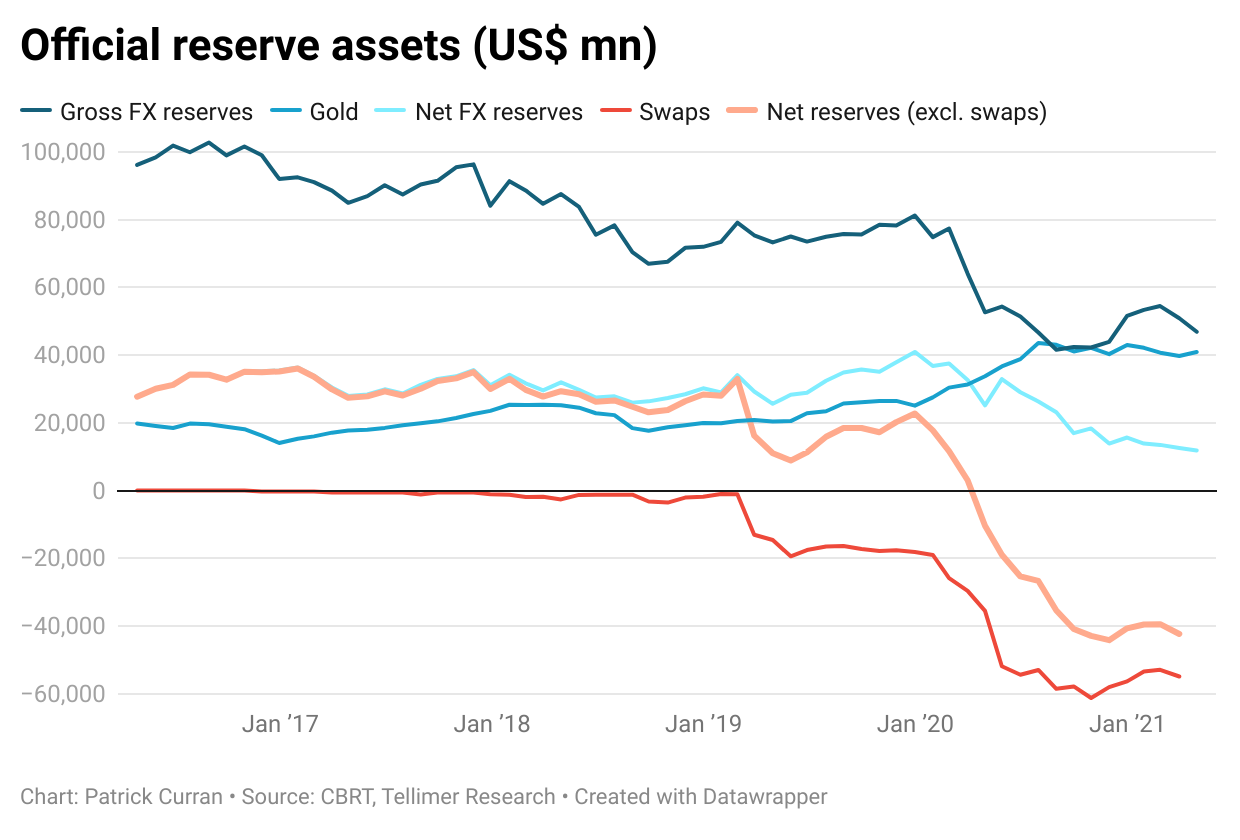 Kavcioglu defended the FX sales in his April interview in the face of what he called "attacks" that began with the 2018 currency crisis and expressed confidence in the quality of reserves, saying that they have simply shifted from assets to liabilities. This laissez-faire attitude does not bode well for the future of reserve management in Turkey, whether it represents a misunderstanding of the reserve issue or simply an attempt to deflect blame and cast it in a rosier light.

In response to mounting pressure to address the issue, President Erdogan said the authorities used US$165bn of CBRT reserves from 2019-20, comprising US$30bn for the current account deficit, US$31bn for capital outflows, US$50bn for real sector FX demand and US$54bn for the purchase of FX and gold by local investors. He said that the CBRT still has US$90bn in reserves, and may use them “again when needed,” raising the risk of a return to the policy of relying on the CBRT and state banks to support TRY via FX sales and swaps in lieu of maintaining a tight policy stance and allowing the balance of payments (BOP) to adjust.

Although the current account has narrowed in recent months, external funding needs remain elevated and will continue to pressure TRY in the months ahead (with a cumulative 12-month current account deficit of US$38bn and short-term external debt of US$192bn on a remaining-maturity basis in February). 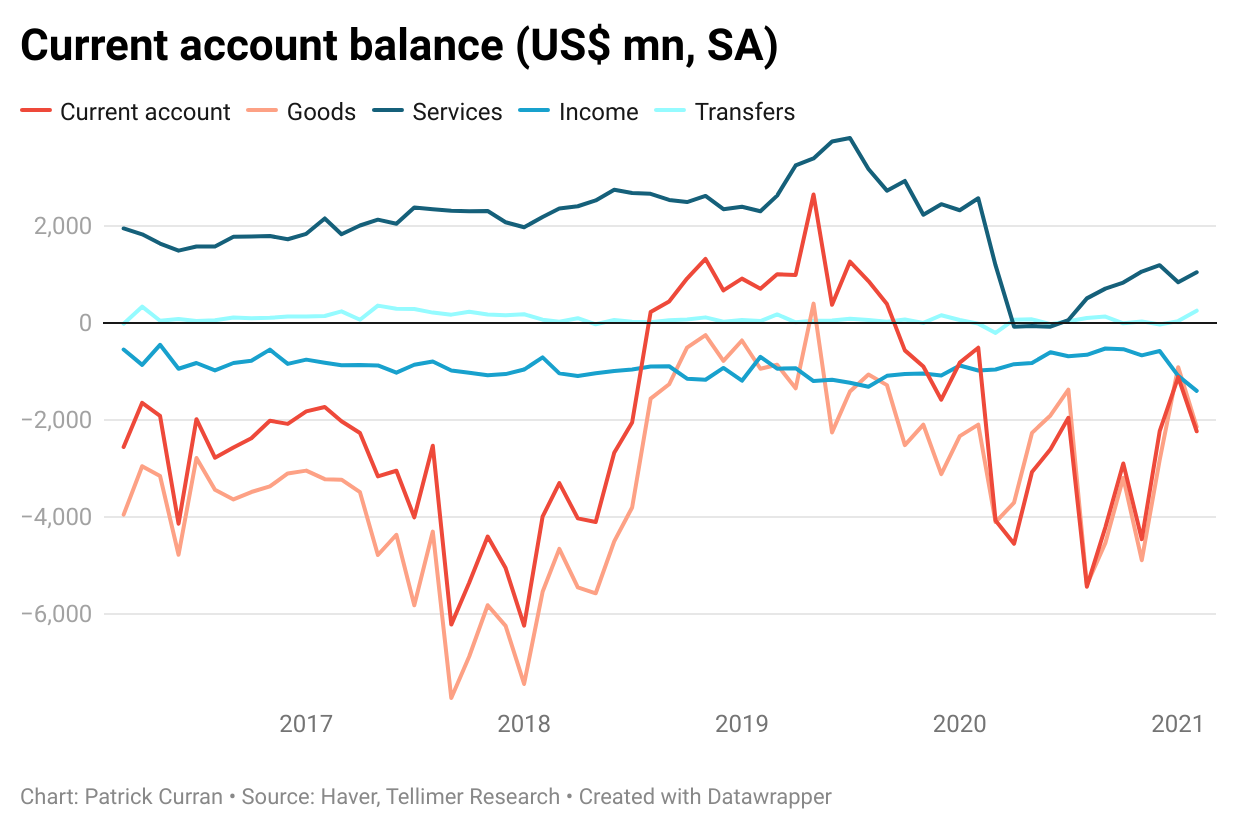 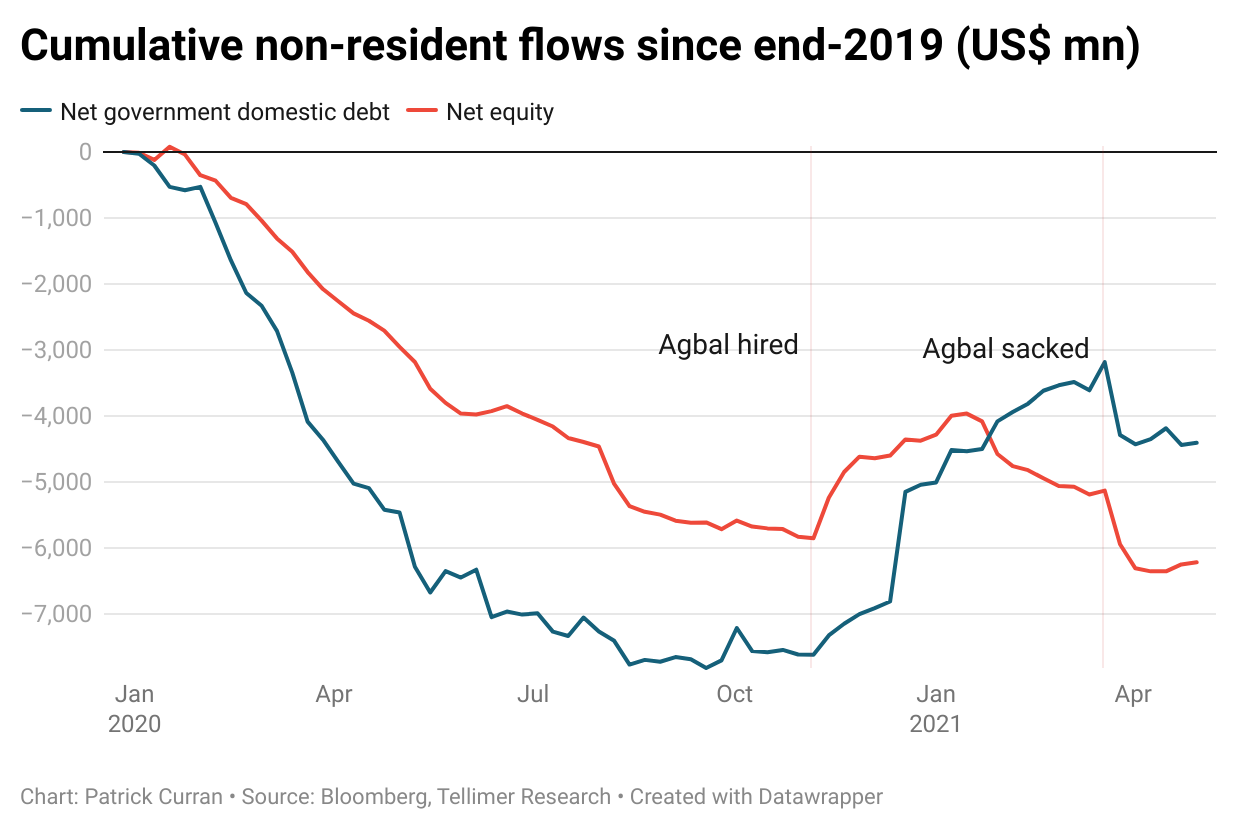 Against this backdrop, risks for TRY will remain skewed firmly to the downside. While Governor Kavcioglu has so far maintained the CBRT’s tight policy stance, his bias towards lower rates is clear and will likely give way to a fresh cutting cycle in H2. And, if those cuts occur before inflation and inflation expectations are set on a firm downward trajectory, and before the BOP rebalancing takes hold, then TRY could enter another downward spiral.

The next MPC meeting on 17 June will be a key signal of Kavcioglu’s commitment to maintaining a tight policy stance. In the meantime, we maintain our Hold recommendation on domestic government debt (with 12-month T-bills trading at 17.85% on a mid-price basis and 12-month TRYUSD swaps trading at 20.76%) and Buy recommendation on Turkish credit (with five-year CDS trading at a spread of 409bps).