For veterans on Turkey, this looks very much like a story they have seen several times before. Almost as soon as policy credibility is re-established, it is lost. The 20 March dismissal of the central bank governor signals that growth has again taken precedence over inflation control, FX reserve stabilisation, and FX rate stability, even though the next general election is not due until mid-2023. This change could not have occurred with worse timing: Turkish inflation is accelerating (with global commodity prices up sharply) and the FX rate was already under pressure (with US yields up). The protective cloak of policy credibility has been removed and with this the top-down investment case for foreign investors, as well as for dollarising domestic ones, is, once again, undermined. 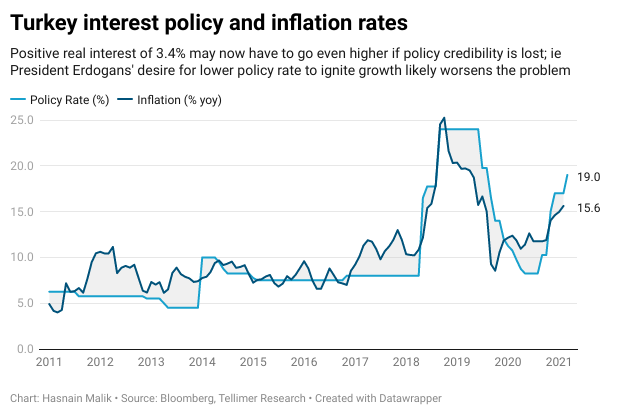 A surprisingly large rate hike, 200bps to 19% on 18 March, which brought cumulative hikes to 875bps since central bank governor Naci Agbal's appointment in November 2020, was followed by his abrupt replacement with an acolyte of President Erdogan's market-unfriendly, unorthodox policy view – high rates cause, as opposed to cure, high inflation.

Turkey's reversion to orthodox economic policy made it stand out from the other distressed emerging and frontier markets (eg Argentina, Lebanon, Nigeria) over the last six months. This loss of the figurehead who implemented that policy correction obviously punctures the investment case for foreign investors in local currency equities and bonds.

Kavcioglu, former AKP politician and columnist in a pro-government newspaper, becomes the fourth Governor since 2019, underlining the lack of independence at the CBRT. Worse still, he is ideologically the polar opposite of Agbal and wrote in a recent newspaper column that "interest rate increases will indirectly lead to an increase in inflation". With Kavcioglu at the helm, interest rate cuts appear imminent, which will initiate a negative feedback loop of lower real interest rates, currency depreciation, and rising inflation.

It is also possible that Agbal's removal heralds a wider leadership reshuffle and markets will worry that Finance Minister Lufti Elvan, who alongside Agbal was the figurehead of the purported policy shift, is next on the chopping block. Erdogan's recent comments in defense of son-in-law Berat Albayrak, whose resignation as Finance Minister in November triggered the leadership reshuffle at both the CBRT and Finance Ministry, will increase speculation that Erdogan is setting the stage for his return. This would be disastrous for Turkish assets and send a clear sign that unorthodox policymaking is back in full force.

We have previously advocated Turkish equities relative to other distressed economy trades for those with sufficient risk appetite. In our articulation of the bull case for the carry trade in Turkish T-Bills, we have also consistently expressed caution on the vulnerability to a reversion to type by Erdogan. It is clear that this has come to pass and therefore we downgrade our views.

Monday is likely to be a bloodbath for the TRY as markets express their clear and strong dissatisfaction with Agbal's removal and begin to reverse the c18% currency appreciation and cUS$4.7bn of domestic government debt and equity inflows that followed his appointment. As such, we downgrade our recommendation on Turkish T-bills from Buy to Sell.

Turkey: The only chart that matters – interest rates and inflation, June 2020