Kim Kardashian has brought the spike in the Azerbaijan-Armenia conflict to the attention of 67m followers on Twitter and 189m followers on Instagram.

Investors, probably using other news sources, have also taken note: the Turkish Lira is down 2.6% and the Russian Ruble is down 1.9% since the spike in hostilities on 27 September.

There is very little chance of hot military conflict, directly between Turkey and Russia: neither can afford it to fight across the three arena they are most directly opposed — Azerbaijan, Libya, Syria — and neither can win easily in each of the three. But both can indirectly support their side and exacerbate the local conflict.

There should be no surprise that Turkey is involved in external geopolitical friction. This friction matters for the investment case less than Turkey's poor macroeconomic metrics (and, for foreign equity investors, short-selling and stock-lending bans and FX controls).

Conflict between Azerbaijan (backed by Turkey) and Armenia (closer to Russia and Iran) has flared up in recent days — violence is at levels not seen since the four-day war in April 2016, martial law has been declared in Azerbaijan, Armenia, and the Republic of Nagorno-Karabakh (also known as Artsakh, internationally recognised as Azerbaijan's territory but controlled by Armenian separatists).

These events have spooked some that Turkey is now involved in another hot conflict internationally and its third, indirectly, with Russia (Libya and Syria being the others).

Previously, Azerbaijan-Armenia escalations have ended in a return to negotiations.

While China, Germany, the EU, and the US have called for de-escalation, there is no guarantee that happens this time. The recent context is different because of: 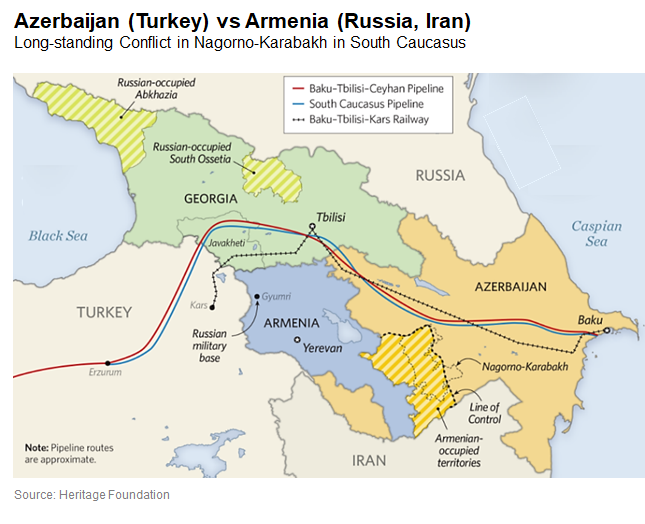 Over the last 15 years, the consensus portrayal of Turkey, under President Erdogan, has shifted from a shining emerging market, with prudent fiscal management, structural reform, improving infrastructure, export-driven growth, a vibrant democracy, benign foreign policies aligned with the geopolitical interests of the GCC, EU and the US (and Israel) to, well, pretty much the polar opposite on every one of these characteristics.

Some of that reversal in perception has been driven by Erdogan's:

Some of it has been driven by the tendency for consensus in both foreign mainstream media and foreign institutional investors to swing from uncritical euphoria to unforgiving despair (similar swings of consensus perception have taken place on China, India, Saudi, for example).

But part of this change has been driven by an inevitable return to more proactive foreign policy by Turkey. It has reverted to more engagement and intervention in its neighbourhood after fixing (at least for a while) its economic engine and amidst a less engaged, less credible global superpower (the US).

The alternative would see other regional rivals (eg Iran, Israel, Russia, Saudi, UAE) establish influence and control in ways that might threaten Turkey's security and access to oil and gas supply and trade routes in the long-term. Putting Ottoman romanticism and Turkish nationalist revisionism to one side, this regional interventionism is much closer to its historic norm and its geopolitical default than "zero problems with neighbours".

The limiting conditions for Turkey and EU-US reactions to it

This modern incarnation of of interventionist foreign policy is conditioned by two parameters:

Those who are easily spooked by the sort of news reported over the last week, a renewal of clashes between Azerbaijan (backed by Turkey) and Armenia (closer to Russia and Iran) in the long-disputed Nagorno-Karabakh region (it could just as easily have been a clash in the East Med with Greece or Cyprus, or in Syria with, indirectly, Iran or Russia, or in Libya with, indirectly, the UAE) implicitly assume that President Erdogan does not accept his ultimately economic capacity for conflict or that the US and EU are prepared to lose Turkey. 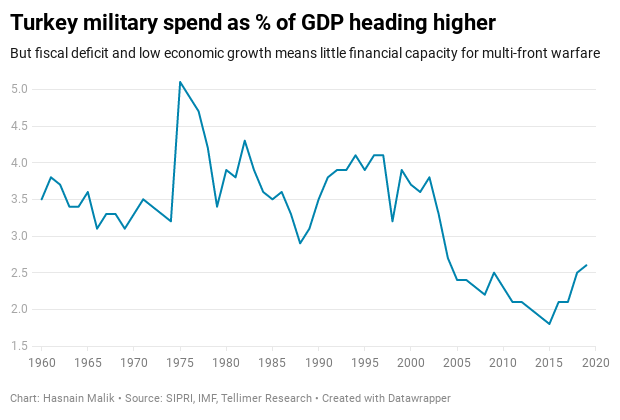 The key weakness for the Turkish investment case remains the lack of credibility in its economic policy, not its complicated geopolitics: