Turkey’s central bank (CBRT) doubled down with a second consecutive surprise 100bps rate cut on 22 September despite accelerating rate hikes by developed markets and soaring inflation at home. This compares with the expectations of 17 of the 22 analysts surveyed by Bloomberg for an unchanged policy stance, with the other five projecting cuts of 50-100bps.

With inflation rising slightly from 79.6% to 80.2% yoy in August, the decision brings the real policy rate to -68.2%. The CBRT continues to attribute inflation to supply shocks, food and energy prices, and “pricing formations that are not supported by economic fundamentals”, although core inflation continued to rise from 61.7% to 66.1% yoy in August, showing that price increases are broad-based.

Still, this does not excuse the CBRT’s blatant disregard for its price stability mandate. In its monetary policy committee (MPC) statement, the CBRT points to a “loss of momentum in economic activity due to the decreasing foreign demand” and says that “It is important that financial conditions remain supportive to preserve the growth momentum". However, Turkey’s robust real GDP growth of 11.35% in 2021 and a further 7.5% in H1 22 is among the highest in the world and puts Turkey’s real GDP 7% above its pre-Covid (2010-19) trend, making the obsession with defending growth at a time of rampant price increases inappropriate. 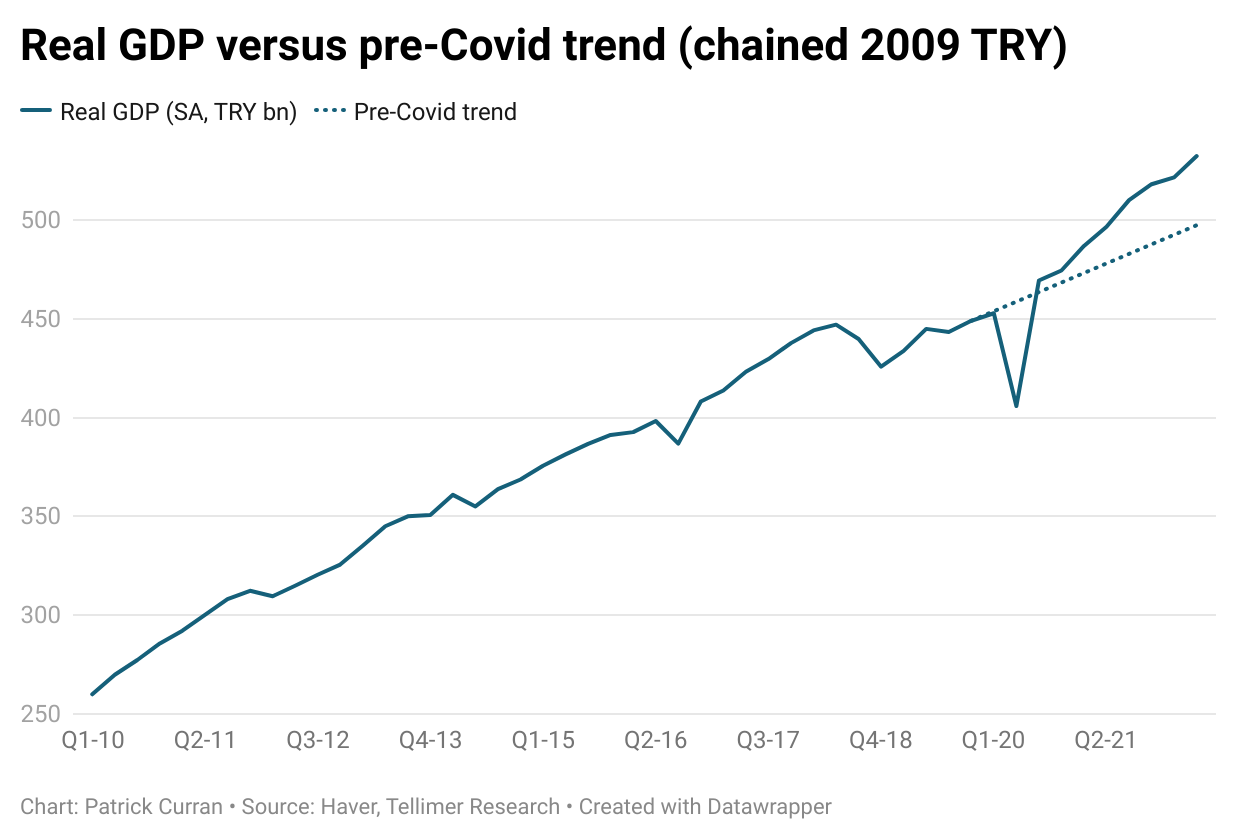 With the general election now just nine months away, it is clear that politics is driving policy, with President Erdogan pushing through policy stimulus to boost his chances at the polls. In addition to the rate cuts, Erdogan has announced a US$50bn plan to build 500,000 new homes and 50,000 new offices and the finance ministry is reportedly preparing a new round of cheap loans under the government-backed Credit Guarantee Fund. While there is space for fiscal stimulus, with the government running a US$3.5bn budget surplus over the first eight months of the year versus a 3.4% of GDP full-year deficit target and public debt at a moderate 42.5% of GDP, fiscal stimulus will stoke price pressures even further.

The balance of payments outlook is less sanguine. While FX reserves have stabilised, with gross reserves rising to US$75bn from US$60bn in early July and net reserves rising to US$14bn from US$6bn over that period (before factoring out the US$62bn of swaps), the current account deficit has reached US$36.7bn over the first seven months of the year versus US$13.7bn over the same period in 2021 on the back of higher energy imports (conversely, the non-oil current account surplus has risen to US16.3bn from US$6.9bn over that period). The widening current account has been funded by net errors & omissions, which reached a record US$5.5bn in July and US$24.4bn over the first seven months of the year.

It is unclear what is driving this trend, with the CBRT previously attributing such unexplained inflows to Turks bringing 'under the mattress' savings into the banking system or depositing FX earned from tourists (with tourism revenue surging to US$14.2bn in H1 from US$5.5bn in H1 22). However, this time, there is likely a large contribution from the facilitation of Russian payments through the Mir payment system to evade international sanctions, which Turkey has refused to uphold. Threats from the US that financial institutions facilitating payments through Mir could face sanctions have prompted several Turkish lenders to suspend use of the system, which could begin to weigh on Turkey’s external buffers. 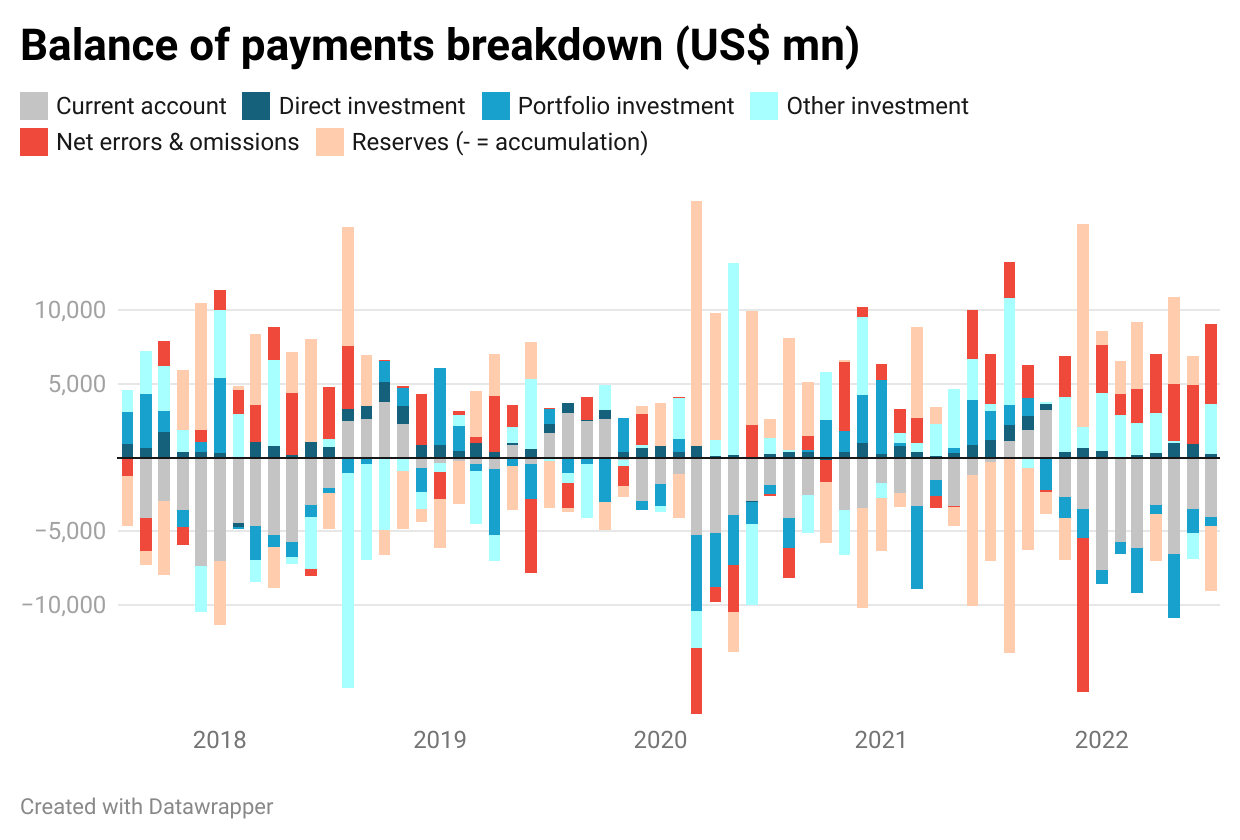 Overall, today’s decision, alongside the continued focus on policy stimulus ahead of the 2023 elections and potential moderation of unexplained inflows to fund Turkey’s widening current account deficit will keep pressure on TRY. The reaction to the CBRT’s rate cuts, however, has been minimal (with TRY largely unchanged yesterday), suggesting the CBRT’s complete conversion to unorthodox monetary policy has already been priced in and that the growing succession of new 'liraisation' measures and likely substantial intervention in the FX market has put a backstop on the struggling lira.

Our Sell recommendation on local government debt has been undermined by a new CBRT policy published last month that requires lenders charging above a certain threshold on new commercial loans to park 20-90% of the value of their new loans at the central bank. This has started to erode the wide margin between lending rates and the CBRT policy rate while also forcing banks to buy more government debt, with 10-year bond yields falling by 500bps since the policy was introduced (pushing up prices by c27%). This will also create more fiscal space for the government ahead of the election. 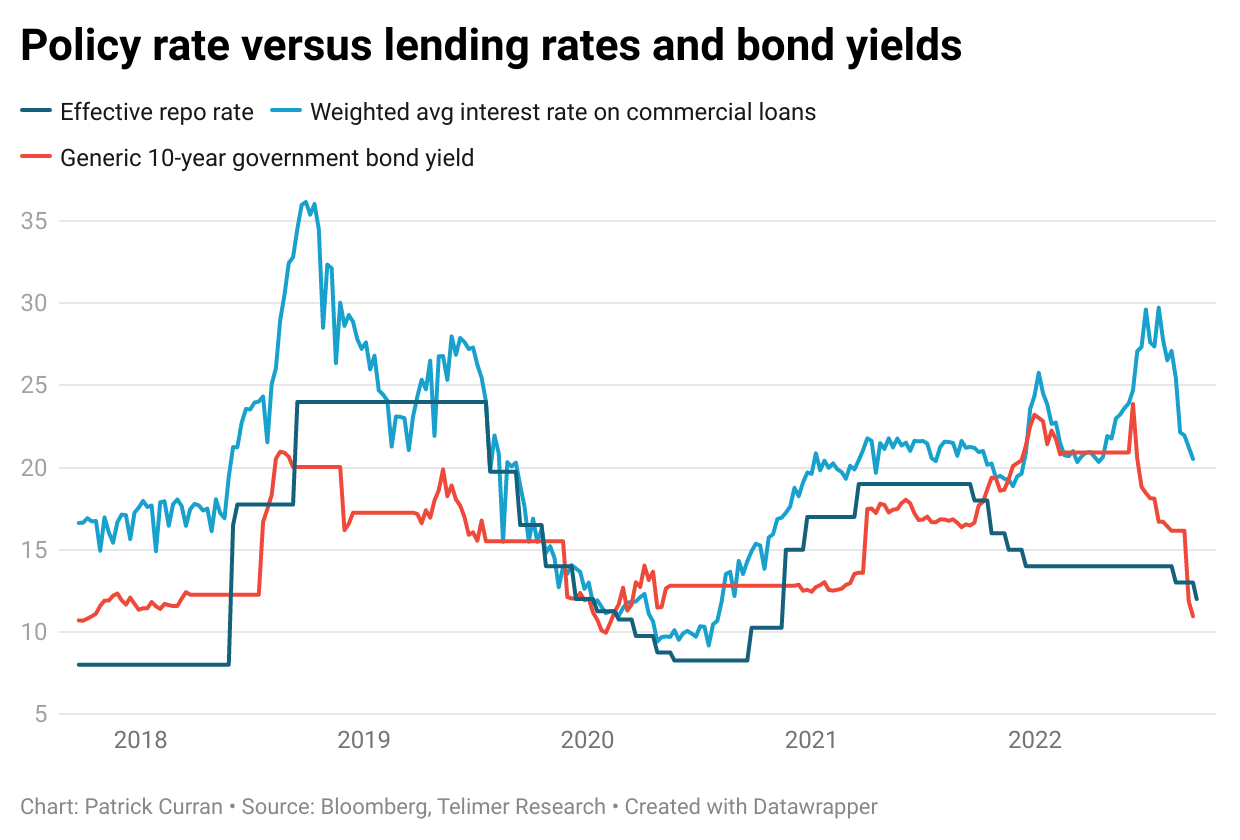 The CBRT has likely reached the end of its cutting cycle for the time being, with the MPC statement saying that “the updated level of policy rate is adequate under the current outlook.” Nor is a policy reversal likely, though, with the upcoming decline in inflation likely to encourage Erdogan and the CBRT to stay the course. Without a policy reversal, inflation will remain firmly anchored in the double digits, with 5- and 10-year breakevens both suggesting that it will settle around 18%.

Against this backdrop, TRY will remain under pressure, with the growing menu of unorthodox policies only papering over the cracks in Turkey’s monetary policy framework and the recent bond rally skewing risks squarely to the downside when the CBRT is eventually forced to react to the persistently high inflation problem that it has created (see Related reading). As such, we maintain our Sell recommendation on TRY and on TRY-denominated government debt.