In our year-end review, we highlighted Egyptian T-bills as one of our top trades of 2021 and Turkish T-bills as a trade to watch. In the intervening months, the Egyptian carry trade has remained an investor favourite while the Turkish carry trade has collapsed following the sacking of the central bank governor by President Erdogan last month (prompting us to downgrade from Buy to Sell). 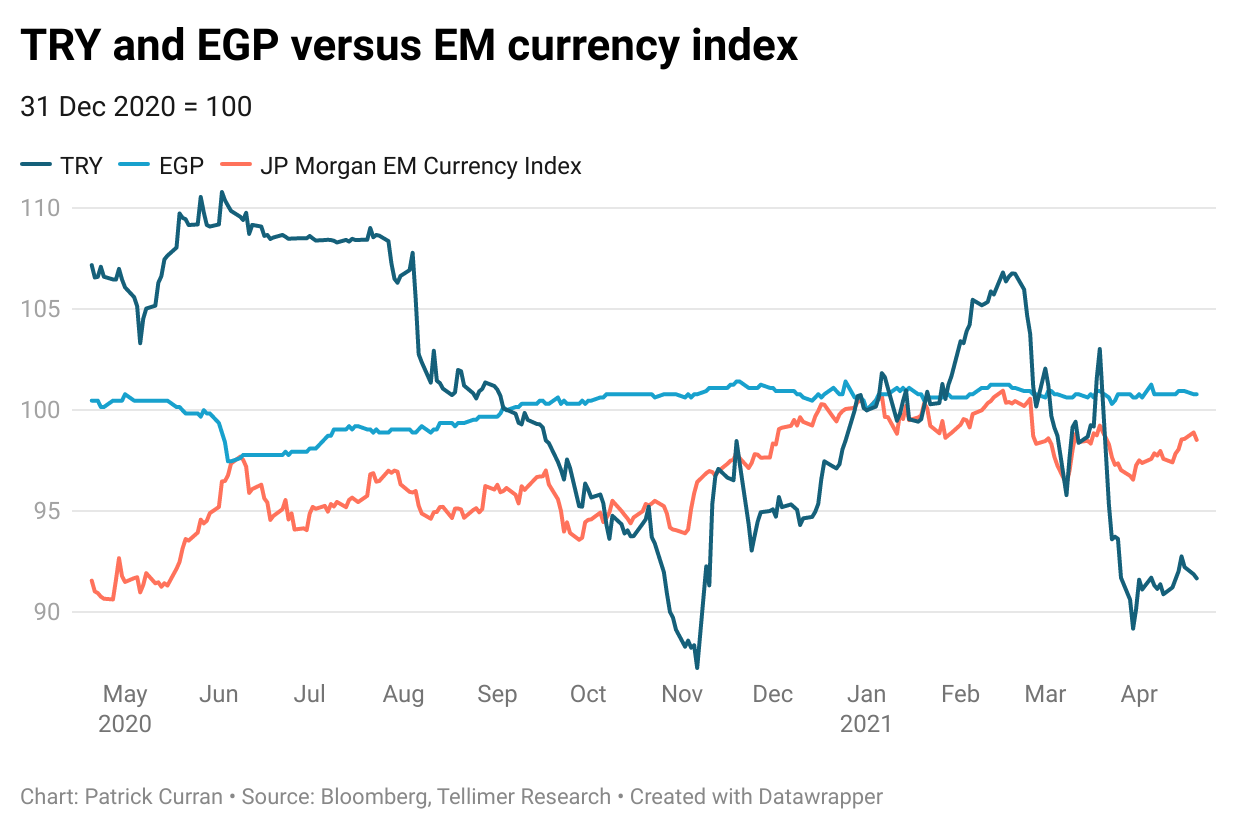 Despite similar a similar carry trade rationale at the time (eg high real rates), Egypt and Turkey are in many ways polar opposites. While the monetary stance is considered broadly appropriate in Egypt, Turkey’s economic woes stem from its lack of monetary policy credibility. Meanwhile, Egypt is undertaking an ambitious fiscal consolidation but from an extremely vulnerable starting point, while Turkey’s low debt levels give it space to run looser fiscal policy to offset a tight monetary stance.

Growth in both economies surprised to the upside in 2020 (+1.5% in Egypt and +1.8% in Turkey), but in Turkey it was mainly driven by rapid credit growth while in Egypt it was underpinned by strong performance under its IMF programme (with the first review concluded in December 2020 and the second review/Article IV consultation upcoming).

The cornerstone of Egypt’s IMF programme is its 2% of GDP primary surplus target, which it plans to return to by 2021/22 after some IMF-sanctioned relaxation of targets post-Covid. However, with public debt reaching a projected 93% of GDP this fiscal year, Egypt will have to sustain its ambitious fiscal targets for a prolonged period to set debt on a sustainable downward trajectory, and the recently approved 1.5% of GDP primary surplus target for 2021/22 by the cabinet suggests there could be some slippage ahead.

On the other hand, with debt reaching just under 40% of GDP in 2020 in Turkey and the budget deficit widening only slightly to 3.4% of GDP, Turkey has ample space to run looser policy and must instead focus on maintaining a tight monetary policy stance. However, contrary to Egypt, where the debt composition has been improving (longer maturities and lower interest rates), in Turkey it has been heading in the opposite direction (shorter maturities and greater FX borrowing), eroding debt dynamics.

In both countries, external imbalances and large gross external financing needs will continue to loom as the main risk. While reserve buffers are far more robust in Egypt, the influx of foreign investors has left it far more vulnerable to capital outflows. Meanwhile, in Turkey the low stock of non-resident holdings of government debt and equity reduces the risk of capital outflows, but the massive stock of short-term external debt means that there could be a hard stop in the BOP if there is a crisis of confidence and financing dries up.

Both countries, therefore, are particularly sensitive to swings in global risk sentiment and must tread carefully on the domestic policy front to avoid triggering a crisis (in Egypt’s case, by staying the course on fiscal consolidation; and, in Turkey’s case, by staying the course on tight monetary policy). And, over the longer term, both countries have a clear need for ambitious structural reforms to boost productivity after years of reform stagnation (in Egypt) and backsliding (in Turkey).

On the BOP front, a more robust commitment to their respective structural reform agendas will help shift the financing mix away from volatile portfolio flows and towards FDI (which has stagnated in both countries), and, on the growth front, this will enable a shift to a sustainable long-term growth model (away from credit-driven in Turkey and government-driven in Egypt, which will likely see growth rates decline in the medium term, if the transition is not effectively managed).

Differing economic backdrops make for a differing investment case. We continue to think that the Egyptian carry trade is attractive, even if it has become relatively crowded and the risk of capital outflows is elevated, with non-resident holdings of Egyptian T-bills rising from US$10.4bn in May to US$28.5bn in February (above pre-Covid levels). We retain our Buy recommendation on 12-month Egyptian T-bills at an average auction yield of 13.33% as of 22 April on Bloomberg.

Conversely, the prognosis for looser monetary policy in Turkey means that the lira is in for a rocky ride and that relatively high real rates no longer offer such attractive compensation for the FX risk (although we have upgraded from Sell to Hold after the recent selloff, with 12-month T-bills yielding 17% and 1-year TRYUSD swaps yielding 21.45% as of cob on 22 April on Bloomberg).

Egyptian and Turkish credit also makes for an interesting comparison, with Egypt’s 10-year eurobond now trading around 26bps wide of Turkey as of cob on 16 April. With a debt stock nearly 3x that of Turkey, Egypt’s solvency concerns supersede those of Turkey. However, with deeply negative net reserves and high external financing needs, Turkey’s liquidity concerns supersede those of Egypt.

That said, we think Turkey’s relatively strong fiscal position means that the recent selloff has made its eurobonds attractive on a relative value basis and recently upgraded to Buy (with its 10-year US$ bond yielding 6.64% with a z-spread of 509bps on a mid-price basis as of cob 22 April on Bloomberg). Meanwhile, we retain our Hold recommendation on Egyptian eurobonds, with a yield on its 2031 US$ bond of 6.21% with a z-spread of 466bps as of cob on 22 April on Bloomberg. 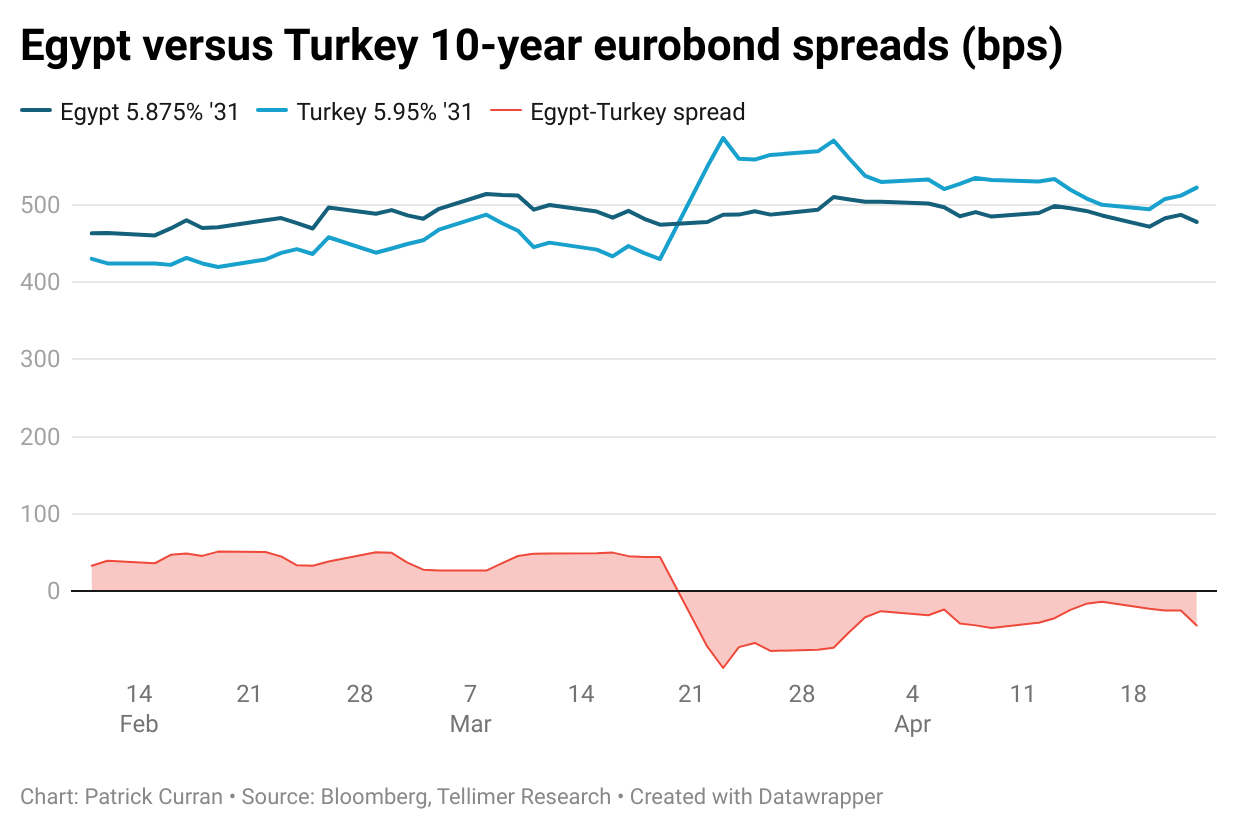