After launching negotiations eight months ago, Tunisia finally reached a highly anticipated staff-level agreement (SLA) with the IMF on 15 October for a 48-month extended fund facility (EFF) worth US$1.9bn. The agreement is contrary to our view (see related reading, below) that Tunisia’s government would be unable to credibly commit to the reforms needed to secure an IMF programme. Bonds, which have rallied since early August in anticipation of the SLA, have jumped further over the past two trading days, with the TUNIS 5 ¾ 01/30/2025s rising by 3.8pts on Friday and Monday to US$64.7.

The IMF statement says that “final agreement on the arrangement is subject to approval of the IMF's Executive Board, which is scheduled to discuss Tunisia’s program request in December". It is unclear what prior actions may be required to secure Board approval and, as we’ve previously highlighted an SLA does not guarantee that the Board will ultimately grant approval. In Lebanon, for example, there has been little progress towards Board approval around six months after an SLA was reached, while in Zambia it took nine months to move from an SLA to Board approval (albeit in the context of a debt restructuring).

The key reform objectives, as outlined by the IMF, include:

Limiting the wage bill and subsidies will be the most politically difficult reforms, and the IMF, encouragingly, notes that “The authorities have already taken steps to contain the civil service wage bill and started to gradually phase out generalised wasteful price subsidies through regular price adjustments that link domestic prices to international prices". The IMF also notes that the Central Bank of Tunisia (BCT) has already begun to tighten its policy stance, hiking its lending rate by 25bps to 7.25% earlier this month (compared with inflation of 9.1% yoy in September).

However, there is still more work to be done on the difficult business of wage bill, subsidy, and SOE reform. The powerful UGTT labour union recently agreed with the government for a 3.5% wage hike to span the 2023-25 period, a key milestone in the reform process. However, any further efforts to limit the wage bill under the IMF programme would likely be resisted, and the UGTT emphasised that there was no deal on reforming subsidies and SOEs, adding that any “painful” changes in these areas would be met with street protests.

Further, President Saied, after pushing through his constitutional referendum this summer, is facing increasing criticism from opponents and allies alike over the newly passed electoral law. Most parties are now threatening to boycott the 17 December parliamentary elections, which will be held under the new law. With Saied’s political capital increasingly absorbed by the upcoming elections and associated changes to the electoral law, his ability to deliver on the reforms promised under the SLA could be hindered.

Overall, the SLA is a significant milestone for Tunisia and credit must be given where it is due. However, due to the reasons we have articulated above and in past notes (see related reading), Board approval is not a foregone conclusion. It is still unclear what prior actions may be needed to get the programme over the line, and we hope to gain more clarity on this if/when the accompanying staff report is published. And, even if Board approval is reached, we think it will be exceedingly difficult to keep the programme on track given the political sensitivity of the proposed reforms.

In the meantime, Tunisia’s economy will continue to be fragile. There have been increasing reports of fuel and food shortages due to a lack of FX for the state to pay for imports. While Saied continues to blame shortages on “speculators”, his explanations ring hollow for a growing swath of dissatisfied Tunisians. Net reserves of the BCT, whose US$3.47bn increase from 2018 to 2021 can be explained by a US$5.14bn rise in trade credits over that period (taking the stock to US$8.66bn), have since fallen by cUS$1bn to just over US$7bn (equivalent to a three-year low of 105 days of imports). 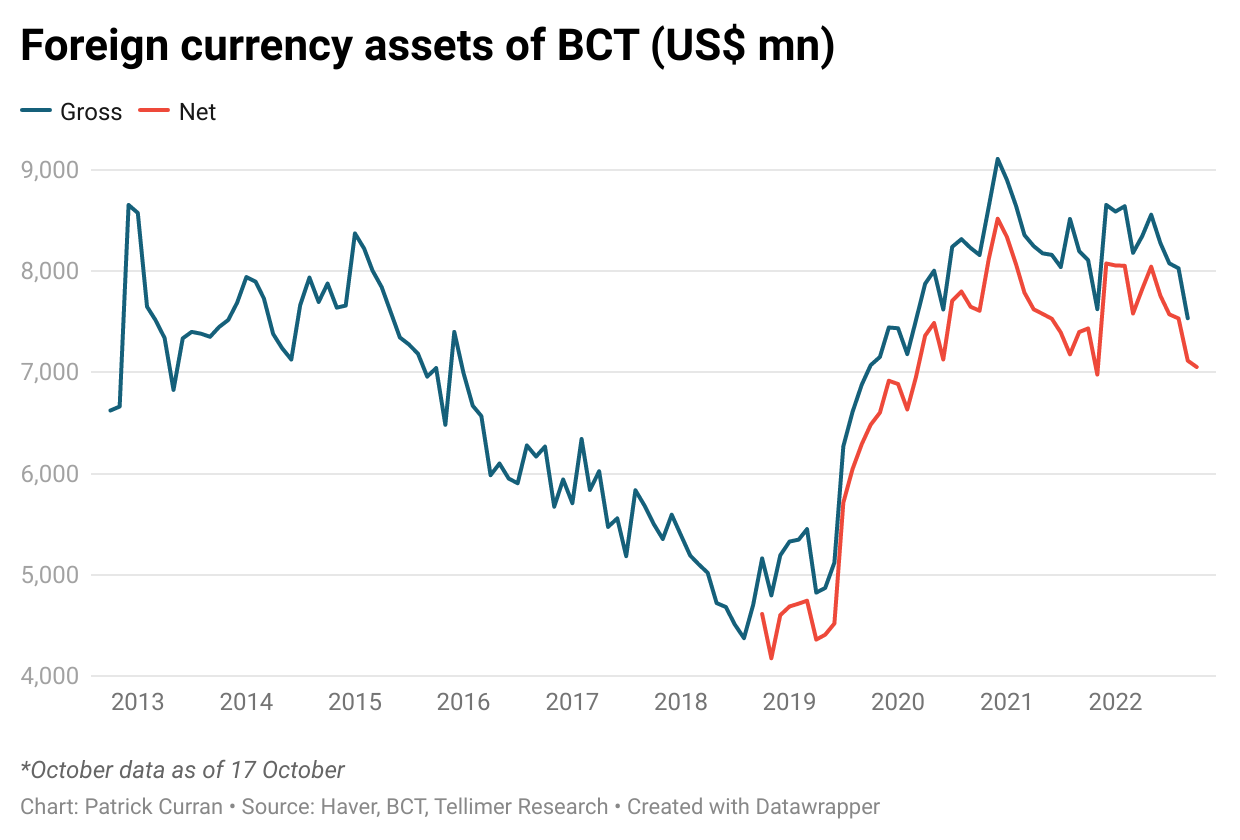 Against this backdrop, the EFF is necessary to avoid a balance of payments (BOP) crisis. The IMF statement also emphasises that “The international community has an important role to play in facilitating the authorities’ program through the rapid release of financing to ensure the success of the authorities’ policy and reform efforts”, with the continued extension of bilateral credit necessary to finance the large current account deficit, which is projected by the IMF to expand by 3pp to 9.1% of GDP in 2022 and remain elevated at 8% of GDP in 2023.

That said, the macro forecasts for Tunisia from the recently updated World Economic Outlook (WEO) database are otherwise quite optimistic. The budget deficit, for example, is projected to decline from 7.6% of GDP in 2021 to 6.6% of GDP in 2022, below the initial 6.7% of GDP target despite recent guidance that subsidy spending could push it 3pp wider on the year. Another 5pp of primary balance consolidation is projected from 2023-27, taking the total fiscal effort to 7.5%pp relative to the post-Covid peak in 2020. This will help push public debt from 89% of GDP in 2022 to 78% by 2027. 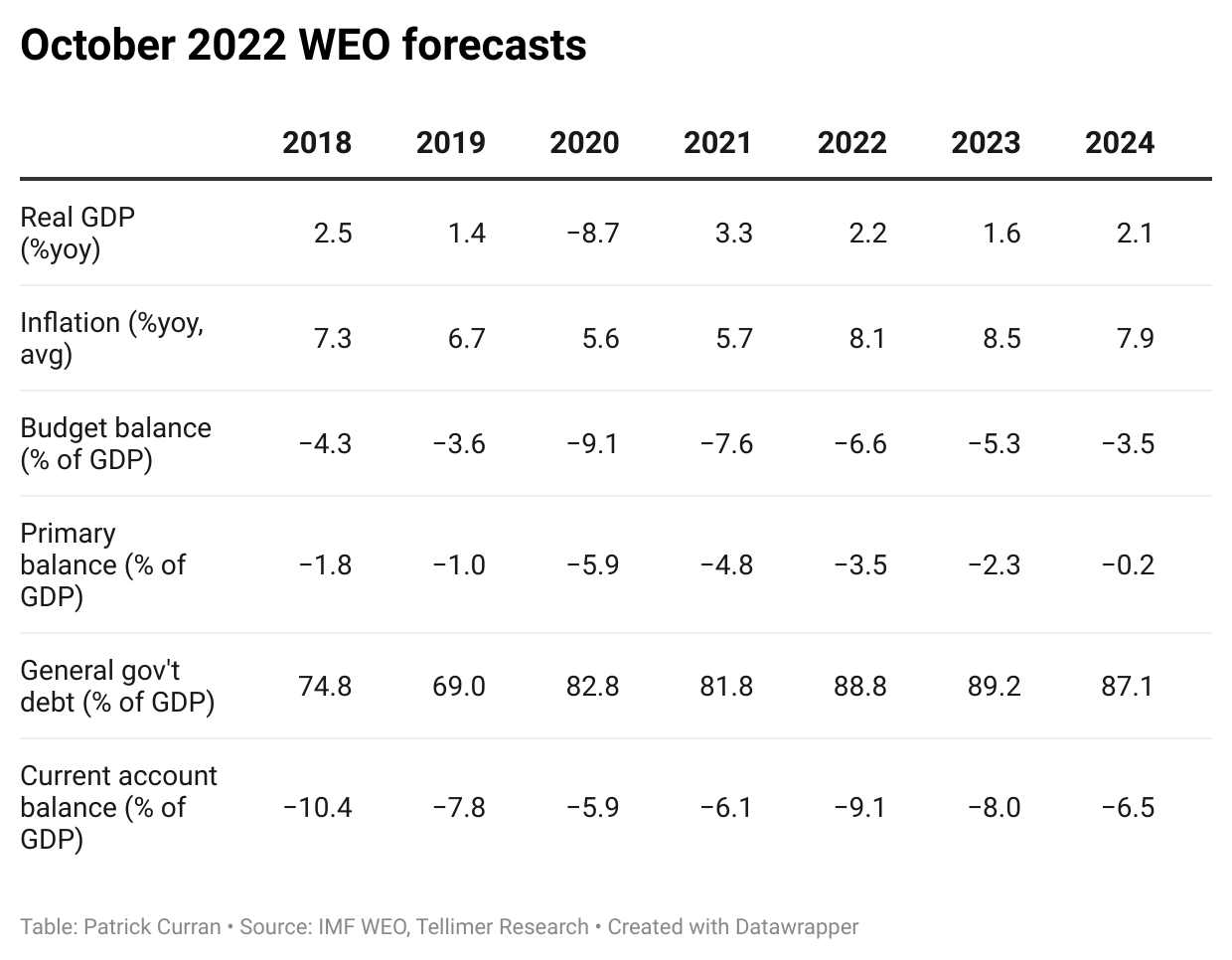 Based on these projections, the IMF appears to believe that debt is sustainable in Tunisia. We had previously worried that, even if Tunisia was able to secure an IMF programme, the IMF could deem Tunisia’s debt unsustainable and would thus be unable to provide financing without a debt restructuring. As there is no mention of the need to restructure debt in the press release, it appears the IMF has been sufficiently assured that Tunisia’s debt is sustainable under its proposed reform programme, seemingly removing the near-term restructuring risk if Board approval is indeed granted. 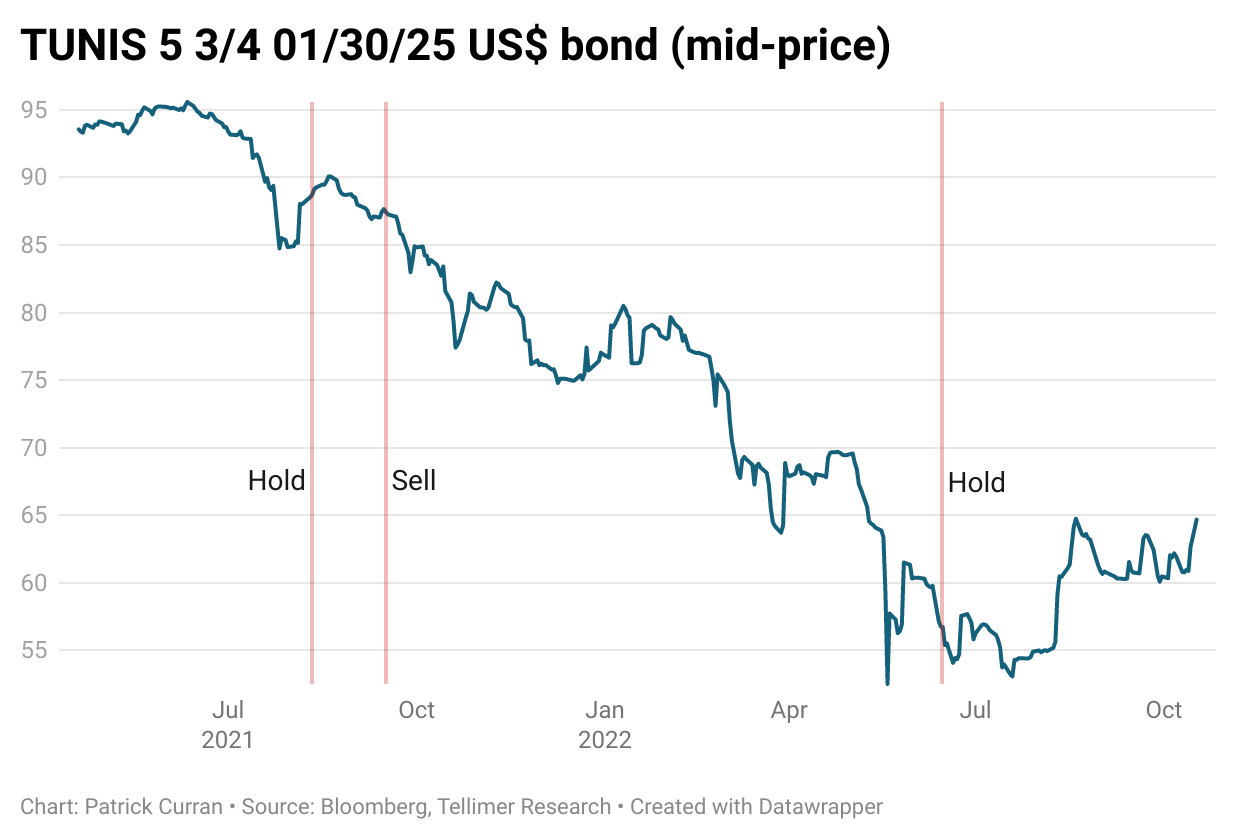 There could still be some upside if Board approval is secured but, ultimately, the positive news is now largely priced in and the potential upside is balanced by downside risk if Board approval cannot be secured. Over the medium term, we still think it will be extremely difficult for Tunisia to deliver on its reform promises and that the fiscal and external balances will continue to teeter on a knife edge, with an extremely ambitious consolidation plan underpinning the IMF’s debt reduction forecasts.

While the SLA is a major milestone for Tunisia, we retain our Hold recommendation on the TUNIS 5 ¾ 01/30/2025s at a price of US$64.7 (27.6% YTM) as of cob on 17 October on Bloomberg. With so many other countries trading at distressed levels (with cash prices of cUS$33 for the Pakistan ‘31s, cUS$35 for the Ghana ‘32s, cUS$61 for the Egypt ‘32s, and cUS$65 for the Nigeria ‘32s, all of which we have Buy recommendations on), we think there is better value found elsewhere in the EM credit universe.