President Kais Saied has solidified Tunisia’s shift to authoritarian rule after his new constitution was approved in a widely discredited referendum on 25 July. The electoral commission announced that the amendments passed with the support of 94.6% of participants. However, turnout was a meagre 30.5% amid an opposition boycott (revised from 27.5% after the commission mysteriously added 371,000 votes), in contravention of the accepted international norm stipulating a minimum participation threshold for binding referendums. The results will be finalised on 27 August.

There was never any doubt that the amendments would pass, with the electoral commission hand-picked by Saied and the 'yes' campaign using the media and state resources to push for its passage while suppressing the ability of the boycott and 'no' camps to campaign. As such, the referendum was simply a rubber stamp for a new constitution that was effectively authored single-handedly by Saied without legitimate national dialogue or any attempt to educate the public on its contents or implications. Once official, the amendments will effectively close the door on Tunisia’s brief experiment with democracy (indeed, Tunisia was the last democracy standing from the Arab Spring), ushering in a new regime characterised by one-man rule.

Among other things (see here for a comprehensive summary of the referendum by DC-based think tank POMED), the amendments give the president the right to dissolve parliament, appoint the prime minister, and hire and fire judges, effectively subjugating the legislative and judicial branches below the executive. It also introduces a national council of regions and provinces to realise Saied’s vision of a 'barbell-shaped' structure characterised by a strong executive and devolution of powers to the local level, effectively denuding the Parliament altogether. Further, there is no provision for Parliament to remove the president, who can remain in power beyond his two terms under certain conditions.

Saied’s priority will now shift to establishing the new electoral law ahead of parliamentary elections scheduled for 17 December. Saied will continue to rule by decree until the elections, and the new constitution is riddled with ambiguities regarding the electoral process, so there is widespread concern that he will use the new law to further isolate his opponents and solidify his control over the legislative branch and electoral process.

Meanwhile, criticism of Saied by the West has continued to be muted. The US State Department released a statement saying “We share the concerns expressed by many Tunisians that the process of drafting the new constitution limited the scope for genuine debate and also that the new constitution could weaken Tunisia’s democracy and erode respect for human rights and fundamental freedoms". However, so far there have been no real attempts to punish Saied or influence his behaviour.

It is clear that Saied’s obsession with constitutional reform is not shared by the majority of Tunisians, who are feeling the weight of Tunisia’s growing economic crisis and concerned more with their economic survival than high politics. However, Saied has shown no interest in economic policy and is increasingly out of touch with the needs and desires of ordinary Tunisians, eroding the sky-high popularity he enjoyed following his election to the Presidency in 2019 and his seizure of power exactly a year ago.

Saied continues to sink more political capital and bandwidth into his political reforms, which will continue as he turns his attention to the new electoral law and elections. As we have highlighted repeatedly (see related reading, below), this will limit his ability to push through politically contentious but necessary economic reforms, made all the more difficult by his refusal to engage in constructive dialogue with powerful entities like the UGTT labour union (whose stamp of approval will be required for any meaningful reforms to move ahead).

The IMF said in a statement on 19 July that “The Tunisian authorities and IMF staff made good progress on the parameters of the authorities’ economic policies and reforms to be supported by an IMF program", promoting hopes that Tunisia was moving closer to reaching an agreement to on reforms and funding to save the economy. With the referendum now in the rear view mirror, perhaps Saied will be able to use his executive powers to push through difficult reforms and secure an IMF programme.

However, we think any such hope is misplaced. Saied has shown a consistent lack of interest in economic policymaking, and even if an acceptable reform agenda is presented to the IMF and yields a staff-level agreement for an IMF programme, Saied will be unable to push through the difficult prior actions needed to obtain Board approval amid growing opposition to his rule. And, if Western leaders find their moral compass and pull financial support for his autocratic regime, then Tunisia’s external funding gap will only worsen.

The approval of Saied’s referendum was a foregone conclusion, and does not impact our investment thesis. While positive IMF statements are somewhat encouraging, we do not think the current political backdrop is conducive to the formulation and implementation of the kind of far-reaching reform plan that is required to set Tunisia’s economy on a sustainable path, and therefore think default is imminent over the medium term. 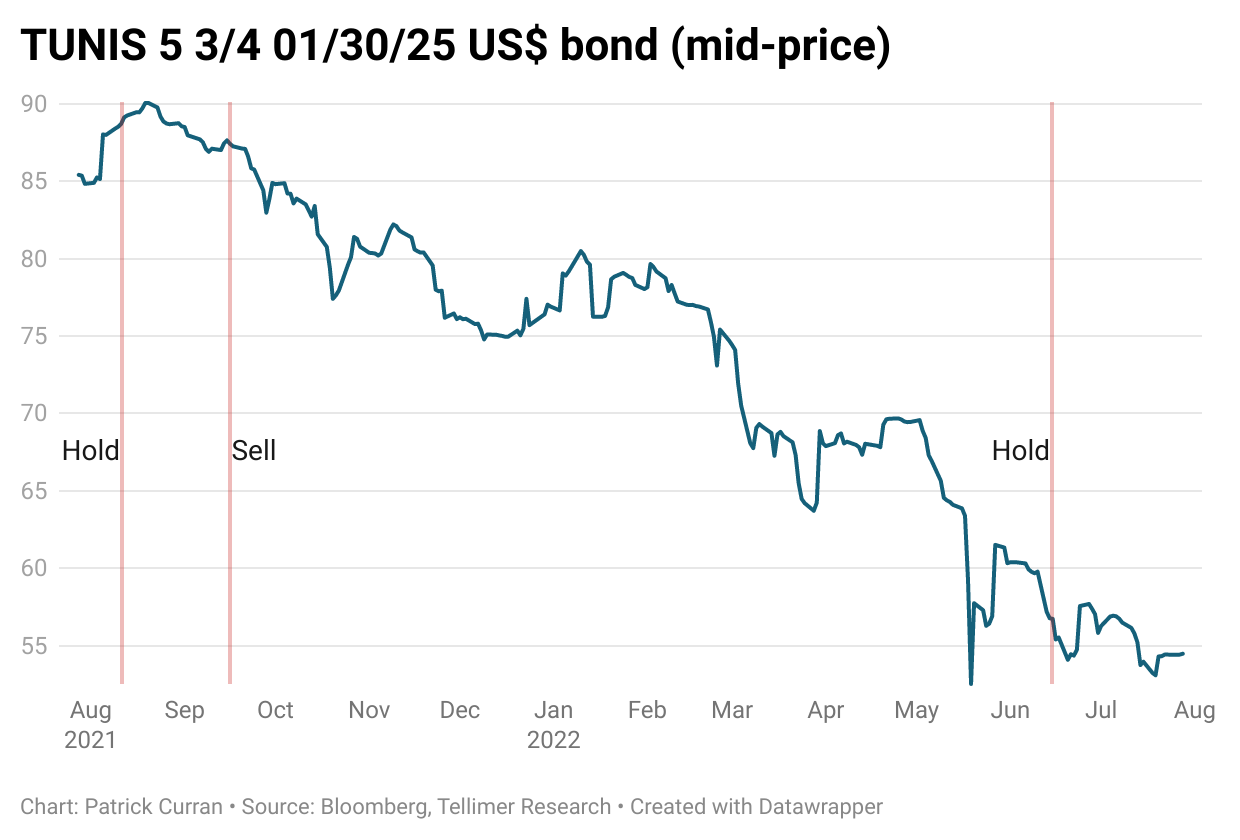