Low turnout, success for the outsider candidates and confirmation of the fracture of the ruling Parliamentary party (Nidaa Tounes): these are our observations from the exit poll data following round 1 of the Tunisia Presidential election.

This reinforces our previously published view that there are material risks to the formation of a coherent and empowered coalition following the upcoming Parliamentary election (6 October).

Fragmented politics will strain Tunisia's pursuit of fiscal consolidation and structural reform (and, by implication, the conditions of the 4-year US$2.9bn IMF loan which runs to May 2020).

"Outsiders" will contest round 2 (before 23 October)

Official results from the election commission are expected on 16 or 17 September, although a low turnout figure of 45% (compared to 64% in round 1 in 2014) has been disclosed. An exit poll by Sigma Conseil surveyed about 39,000 people from 17% of polling stations, spread across 80% of the countries electoral regions. In this poll, two candidates not supported by the main Parliamentary political parties are in the clear lead and will likely contest round 2 (which should be held before 23 October).

Establishment candidates rejected in round 1 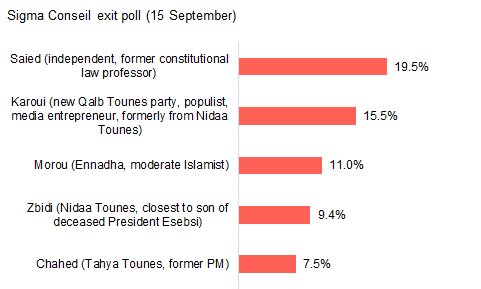 This Presidential election matters even if the President's powers are limited

The President is in charge of foreign, defence and security policy. Sovereignty over all other matters (e.g. economic policy) resides with Parliament (which has its own election on 6 October). The reasons why this Presidential election matters despite the limited powers of the offices are as follows.

(2) The campaign has seen a formal split within the Nidaa Tounes party between PM Chahed's Tahya Tounes and the rump represented by Zbidi in round 1: both candidates were rejected.

(3) The victory of anti- or, at least, non-establishment candidates and the low turnout in round 1 reflect a population dissatisfied and distrustful of the main political parties. This reduces the prospects of one of those parties emerging with a strong political mandate after the Parliamentary election.

(4) In the event that Karoui, who is currently incarcerated before conviction for corruption charges, wins round 2 (he was in the lead in the last opinion poll in July 2019 before the official election campaign started), then there is the potential for the Presidential election winner to fail to attend his own inauguration (with an unpredictable outcome in terms of potential protests or legal challenge).

Tunisia equities, measured by the local Tunisia SE index, are up, in US$ total return terms, 6% ytd and are valued on 2.4x trailing price/book (for 13% trailing ROE), which is on par with the 5-year median. This compares with MSCI FM which is up 11% ytd and is valued on 1.8x PB (for 15% ROE).

As an alternative to Tunisia, within the universe of small Frontier equity markets, we prefer Ghana in Africa, Oman in MENA and Sri Lanka in Asia. 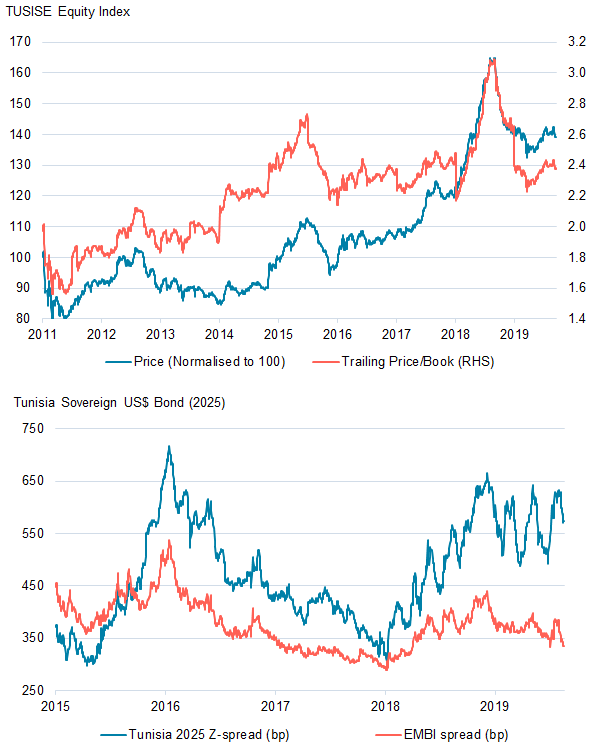