Tunisia was facing a worsening balance of payments (BOP) crisis before Russia’s invasion of Ukraine, which has been greatly exacerbated by the war due to rising fuel and food prices (see here for a more detailed analysis).

Fitch responded by downgrading Tunisia's long-credit rating to CCC from B- on 18 March, and the spread on the TUNIS 5 ¾ 01/30/2025s has risen by 423bps from 18 February to 30 March (down from +747bps as of 28 March), exceeded only by Russia, Ukraine, Belarus and Lebanon for the biggest post-war selloff among EMBI constituents. 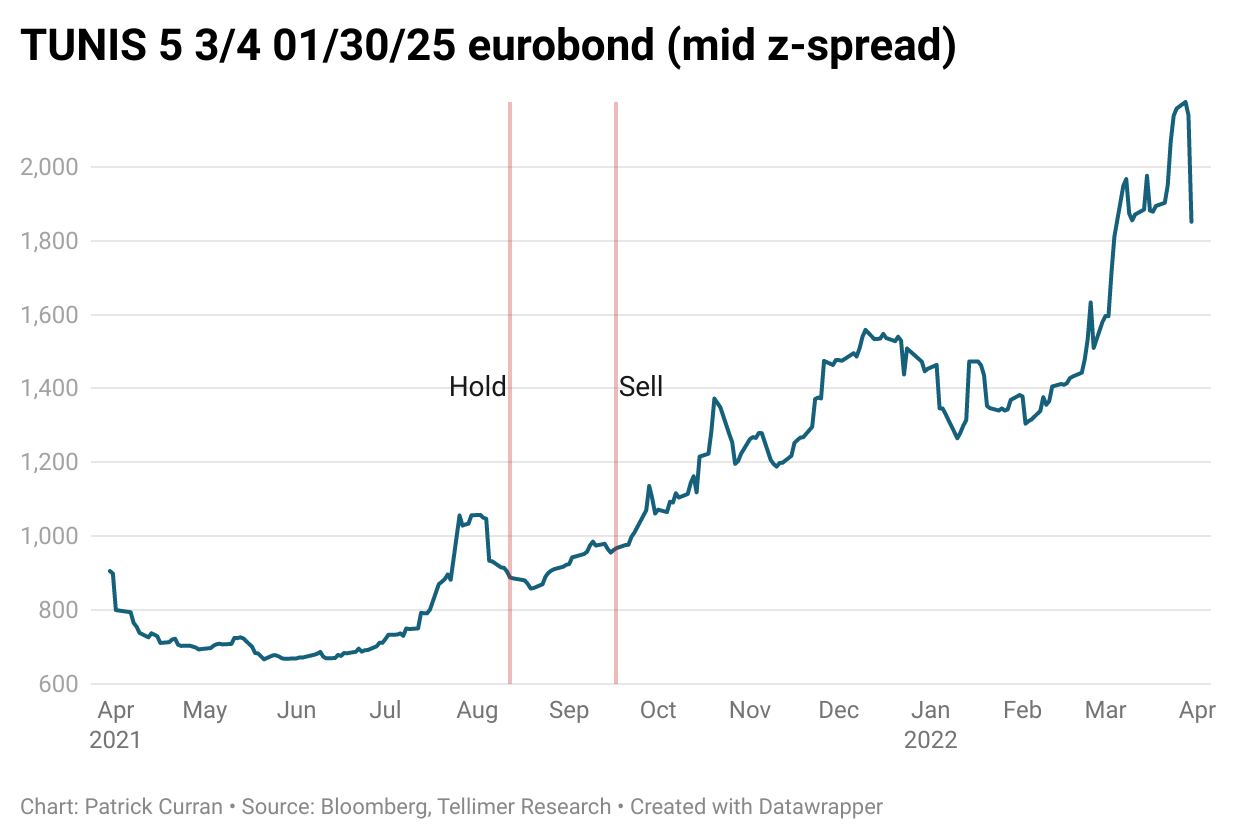 This pushed the mid-price of the TUNIS 5 ¾ 01/30/2025s to a low of US$63.7 earlier this week, slightly below the US$66 fair value and in line with the US$64 recovery value we calculated in December, before rebounding to US$68.9 yesterday. However, economic conditions have worsened and EM yields have increased since, raising the probability of default and exit yields, so recovery and fair value on the bonds has likely decreased as well.

On the other hand, Tunisia has also reached out to the IMF to secure a programme and stave off a BOP crisis. But with the powerful labour union UGTT still opposed to the key prior actions for a programme, including subsidy and wage cuts, we think a programme may be further away than many investors are hoping for (and almost certainly further than the government’s end-April goal).

At the same time, President Saied’s once ironclad approval rating has begun to slip as Tunisians become fed up with his obsession with constitutional reform even as the economy is in a tailspin. And with Saied increasingly concentrating the powers of the state in his own hands and cracking down on all forms of dissent, he has all but erased Tunisia’s post-Arab Spring democratization.

In the note that follows, we will unpack some of the recent economic and political developments, and analyse what this means for Tunisia’s IMF prospects and bond prices. We find that downside risks still dominate, and retain our Sell recommendation on TUNIS 5 ¾ 01/30/2025s at US$68.9 (20.85% YTM) on a mid-basis as of cob on 30 March on Bloomberg.

Ultimately, a positive investment and reform case for Tunisia relies on the finalisation of an IMF programme. The IMF visited Tunis from 23-25 March for a staff visit, the second such visit in as many months, and in a statement yesterday cited “constructive discussions on the Tunisian authorities’ reform programme.” The statement prompted bonds to rally sharply, with the spread on the TUNIS 5 ¾ 01/30/2025s narrowing by 288bps and bonds rising from US$64.2 to US$68.9 on the news. However, we think discussions are in the early stages, and much work still needs to be done to reach an agreement.

The IMF lays out the reforms that would be required to secure a programme, including reduction of the fiscal deficit through “equitable taxation reform, strict control over the public sector wage bill, [and] better targeted subsidies,” reform of state-owned enterprises (SOEs), and improving the business climate and competitiveness of the economy.

Most of these reforms, however, are political non-starters. The powerful Tunisian General Labor Union (UGTT) has repeatedly voiced its outright rejection of any plans to cut public wages and subsidies and privatise SOEs, and said this week that public sector workers, over 1 million of which are union members, were prepared to strike if the government pushes ahead with its plans to do so.

Despite some positive IMF headlines, this underscores the difficulty Tunisia will have implementing key reforms like wage and subsidy cuts that are likely to be prior actions of any IMF agreement (especially given Tunisia’s checkered history with the Fund), and underpins our view that an IMF programme is unlikely to materialise in the coming months.

This means that Tunisia will continue to muddle through as economic conditions worsen. While net international reserves have been relatively stable and currently sit at US$7.7bn (four months of import), we think worsening shortages of basic goods such as wheat (which has been exacerbated by Russia’s war with Ukraine) suggests the underlying BOP situation could be worse than it looks.

President Saied has responded by launching a "relentless war on speculators and criminals” he accuses of hoarding. However, UTICA, the country's largest employers' union, denied that distributors were to blame, citing instead shortages of raw materials and saying that the state’s raids on businesses and arrests of traders have actually exacerbated the problem by causing some traders to cease operations.

In addition to the BOP impact, rising commodity prices will also undermine Tunisia’s fiscal consolidation plans. The government has already budgeted TND7,262bn (5.2% of GDP) for food, fuel and transport subsidies this year, based on much lower food and fuel prices, including a US$75/bbl oil assumption for 2022, which will push up the budgeted 2.1% of GDP for fuel subsidies.

Indeed, the central bank (BCT) warned during its most recent MPC meeting that, without mitigating reforms, rising commodity prices could lead to “a worsening of the balance of current operations’ deficit and exacerbation of inflationary pressure over the forthcoming period.” It also projected a “significant budgetary impact” from increased spending on subsidies, widening the fiscal deficit.

Increasing subsidies could make it even more difficult to secure IMF support, unless it provides leniency on some of these targets in recognition of the severe socioeconomic impact of Russia’s war. On the other hand, failure to increase subsidies could spur social unrest, similar to what we saw in the 2011 Arab Spring. As such, the government is between a rock and a hard place, and will struggle to balance its commitments to the IMF with the demands of an increasingly frustrated and at-risk populace.

Indeed, Tunisia’s economic crisis has begun to erode President Saied's once sky-high approval rating. Protestors have increasingly taken to the streets of Tunis to express anger over Saied’s mismanagement of the economy amid worsening shortages on bakery and supermarket shelves, and his obsession with constitutional reforms is making him look increasingly out of touch with the concerns of ordinary Tunisians.

The “national online consultation” into his proposed constitutional referendum ended on 20 March with the participation of less than 7% of Tunisia’s eligible voters, and is largely seen as being a farce. The opposition responded by convening parliament yesterday, which has been frozen since Saied’s power grab last July, to discuss plans to end Saied’s unilateral rule and resolve Tunisia’s economic crisis (with some calling for early elections).

Saied called the meeting a failed coup attempt and threatened to criminally sue those involved. He also announced the dissolution of parliament, which is officially a step further than, but functionally the same as, the freeze. Still, an intensification of the political dispute certainly does not bode well for Tunisia's reform efforts, and raises the risk of unrest.

Meanwhile, Saied continues to push Tunisia further into authoritarianism. In addition to effectively concentrating control of all three branches of government in his own hands, he has continued to crack down against all forms of dissent by arbitrarily arresting journalists, trying civilians in military courts, and abusing his new law against speculators to curtail freedom of speech.

Tunisia’s democratic slide has not yet undermined external funding, with the EU announcing US$500mn of budget support (part of a US$4.4bn multiyear package) and the World Bank approving US$400mn of Covid relief funding. However, 23 members of the US Congress wrote a letter this week urging the Biden administration to “consider Tunisia’s significant democratic regression as it works with Congress on the FY23 budget process.” And regardless, Saied’s repression could raise ESG questions for foreign investors.

Economic conditions have worsened significantly since December and yields have increased across emerging markets, meaning our target price has fallen below what was calculated in December, notwithstanding the potential upside if Tunisia secures an IMF programme.

However, we do not think an IMF programme is imminent, and economic conditions will continue to worsen until it is secured. The longer it takes Tunisia to secure a programme, the greater the risk that its debt will be deemed unsustainable and it will need to restructure to unlock IMF support (which we think is the case for Sri Lanka, for example).

Against this backdrop, we maintain our Sell recommendation on the TUNIS 5 ¾ 01/30/2025s at US$68.9 (20.85% YTM) on a mid-basis as of cob on 30 March on Bloomberg. We will reconsider our recommendation if the price drops below our previous target of US$66, but an updated DSA and recovery analysis will be required to update our target price in a more concrete way to reflect the ongoing economic deterioration.