Tunisia: Downgrade to Sell with reforms and IMF on backburner

Last month, we said that restructuring was inevitable for Tunisia without an IMF programme to unlock fresh financing and backstop its difficult reform agenda (see here for a comprehensive analysis). Among the key challenges that we highlighted were:

In the IMF’s February review, it said that “Tunisia’s public debt would become unsustainable, unless a strong and credible reform program were adopted with broad support.” But despite clear downside risks for its eurobonds, we assigned a Hold recommendation based on Tunisia’s ongoing talks for a US$4bn IMF programme, which could be a notable positive catalyst if secured.

However, the prospects for an IMF programme appear to have dwindled over the past month as Tunisia’s political crisis has taken centre stage. President Kais Saied issued a decree on 23 August extending “until further notice” the exceptional measures he took on 25 July, when he suspended parliament and lifted immunity from prosecution for all MPs. He has still not named a prime minister or cabinet, leaving Tunisia in a state of limbo for nearly two months.

In a speech delivered on the street in central Tunis on 11 September, Saied promised that “a government will be formed as soon as possible and will be made up of persons of integrity”. He also gave the first implicit sign of his overarching goals, saying that he was open to “introducing amendments to the fundamental law” and that “people have had enough of the constitution.”

It is widely believed that Saied intends to move away from the current parliamentary system and back towards a centralised presidential system like Tunisia had from 1956 to 2011. This sentiment was seemingly confirmed by one of Saied’s advisors, who told Reuters that "this system cannot continue” and that Saied meant to change the constitution “through a referendum,” while acknowledging that the referendum may require “logistical preparation” but that the plans would be unveiled soon.

After years of dysfunctional governance since the parliamentary system was introduced in 2014, it is likely that Saied’s plans will succeed, especially since he remains wildly popular. A recent opinion poll published in Al-Maghreb shows 94.9% approval of Saied’s decision to suspend parliament on 25 July, and 77.1% of respondents agreed that “the country is on the right path.” And while the West has largely condemned Saied’s power grab, its response has been tepid and limited to some rather mild rhetoric.

It now appears likely that Saied will name a caretaker government to oversee a constitutional referendum. Sky News Arabia reported that three men were being considered for the position of PM, including current BCT Governor Marouane Abassi and former finance ministers Hakim Ben Hammouda and Nizar Aich.

This decision is likely to rankle the powerful General Union of Tunisian Workers (UGTT), which initially supported Saied’s dismissal of parliament but more recently has called for a “deadline for the exceptional measures” and for the President to outline a roadmap. UGTT Secretary-General Noureddine Taboubi added that any constitutional changes should only happen with a new parliament in place, calling for fresh legislative elections to move in that direction.

With Saied’s bandwidth and political capital tied up in the political reform process, it seems unlikely that he will simultaneously be able to pursue the type of far-reaching reforms required to secure an IMF programme. And with the UGTT likely opposed to Saied’s political reforms, he will find it especially difficult to deliver a meaningful consolidation of the wage bill, an indisputable requirement of any potential IMF programme but something the UGTT opposes tooth and nail.

The UGTT has also called for a comprehensive audit of public debt issued over the last 10yrs, repeating calls from a decade ago that were ultimately set aside. There has been increasing chatter in the local media about public debt being misspent and diverted, which has fueled calls for debt forgiveness from the media, civil society, and opposition politicians. Even BCT Governor Marouane Abassi has expressed concerns that Tunisia may be forced to default without an urgent change of path.

While the government maintains that it will honour its obligations to creditors (and made two payments of US$500mn each at the end of July and beginning of August), the government continues to look for temporary relief from bilateral creditors in the Gulf and Europe. President Saied himself asked European Commission President Ursula von der Leyen to convert a portion of Tunisia’s debt into investments in June. While bilateral debt relief could provide some temporary respite for Tunisia, there is a risk that certain creditors may ask Tunisia to seek similar treatment from private sector creditors, potentially pushing Tunisia into a more comprehensive restructuring.

On the positive side, concerns of fiscal slippage this year (due to a low US$45/bbl benchmark oil price and failure to present a supplementary budget as promised earlier this year) have proven unfounded. With the deficit narrowing by nearly 50% yoy in H1 21 it looks on track to achieve its 6.6% of GDP target. Further, after monetising 2.5% of GDP of the budget last year, BCT financing has actually turned negative so far this year (although with negative net foreign financing, this puts even more pressure on the domestic banking sector).

However, the improvement is driven largely by a 39% yoy decline in capex, with wages and transfers/subsidies continuing to rise by 6% and 16%, respectively. Subsidies, in turn, are causing problems for Tunisia’s embattled SOEs, with fuel and electricity prices still well below cost-reflective levels. And with increasing reports of financial difficulties at Tunisia’s largest SOEs, it is likely that contingent liabilities of 16% of GDP will eventually have to be recognised on the government balance sheet (which, alongside the necessary currency devaluation, would push up public debt).

To secure an IMF programme, President Saied will need to reduce subsidies and the public wage bill. With the powerful UGTT firmly opposed, his political capital tied up in a possible constitutional referendum, and no government in place to implement reforms and negotiate with the IMF, it does not appear likely that a programme is imminent. And in the meantime, Tunisia’s external vulnerabilities will only continue to grow.

It is increasingly common to see comparisons between Tunisia and Lebanon among the local media and civil society. In Lebanon, a BOP crisis was delayed for years by robust deposit inflows from the Lebanese diaspora, attracted by high returns resulting from the BdL’s financial engineering. In Tunisia, the BOP has instead been funded by robust support from IFIs, bilateral creditors, and markets.

Indeed, following a decade of current account deficits averaging nearly 9% of GDP, Tunisia’s net international investment position (NIIP) has gone from -100% of GDP in 2010 to a whopping -170% of GDP by 2020, one of the highest negative positions in the world, both currently and in recent history. Of this, over 100% of GDP is related to “other investment”, which is largely a function of multilateral and bilateral government borrowing. 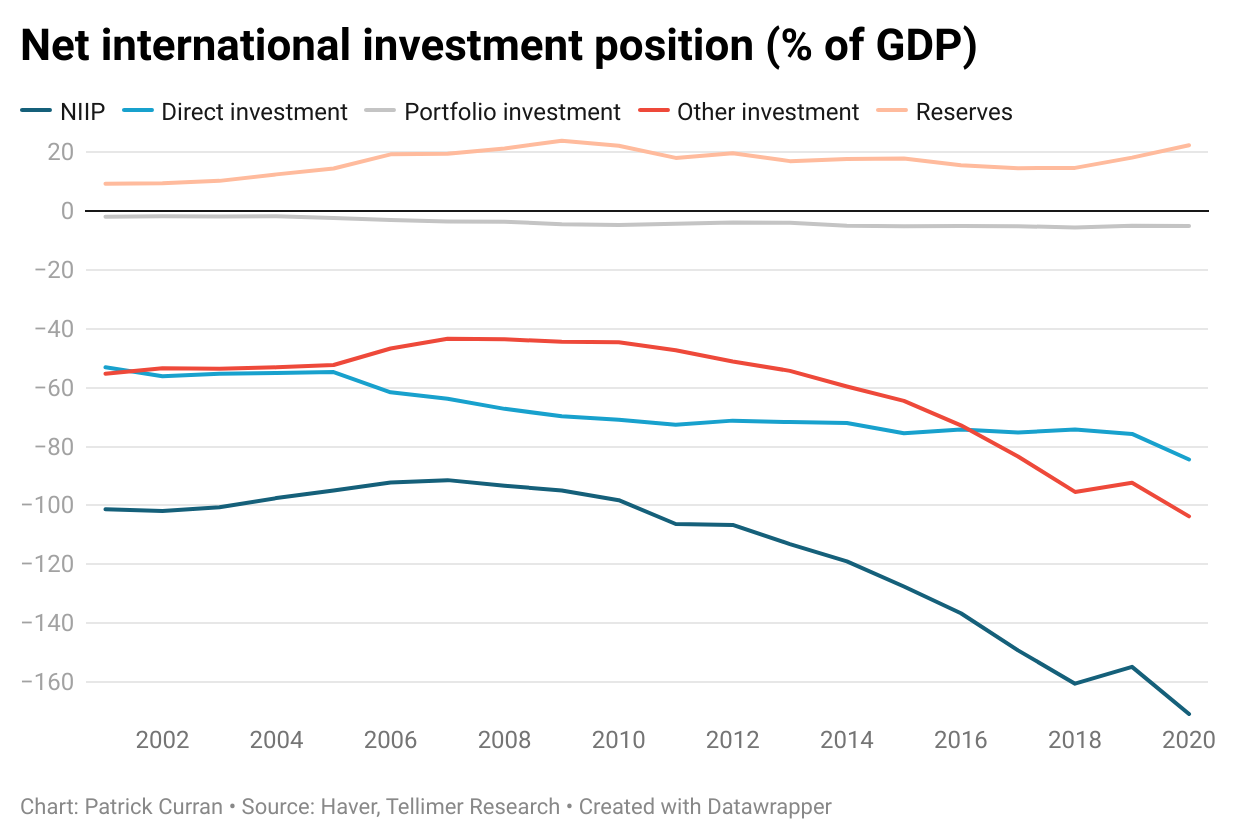 So, while reserves have increased over the past two years (with gross reserves rising from US$8bn to US$8.5bn in August on the back of the US$741mn SDR allocation and net reserves sitting at US$7.2bn, or c4 months of imports, on 15 September), this has largely been a function of increased borrowing and, as such, liabilities against those reserves have increased too. As those liabilities come due, reserves will come under pressure and it will be impossible to avoid a BOP crisis without a sharp fiscal/external adjustment and ongoing financial support. 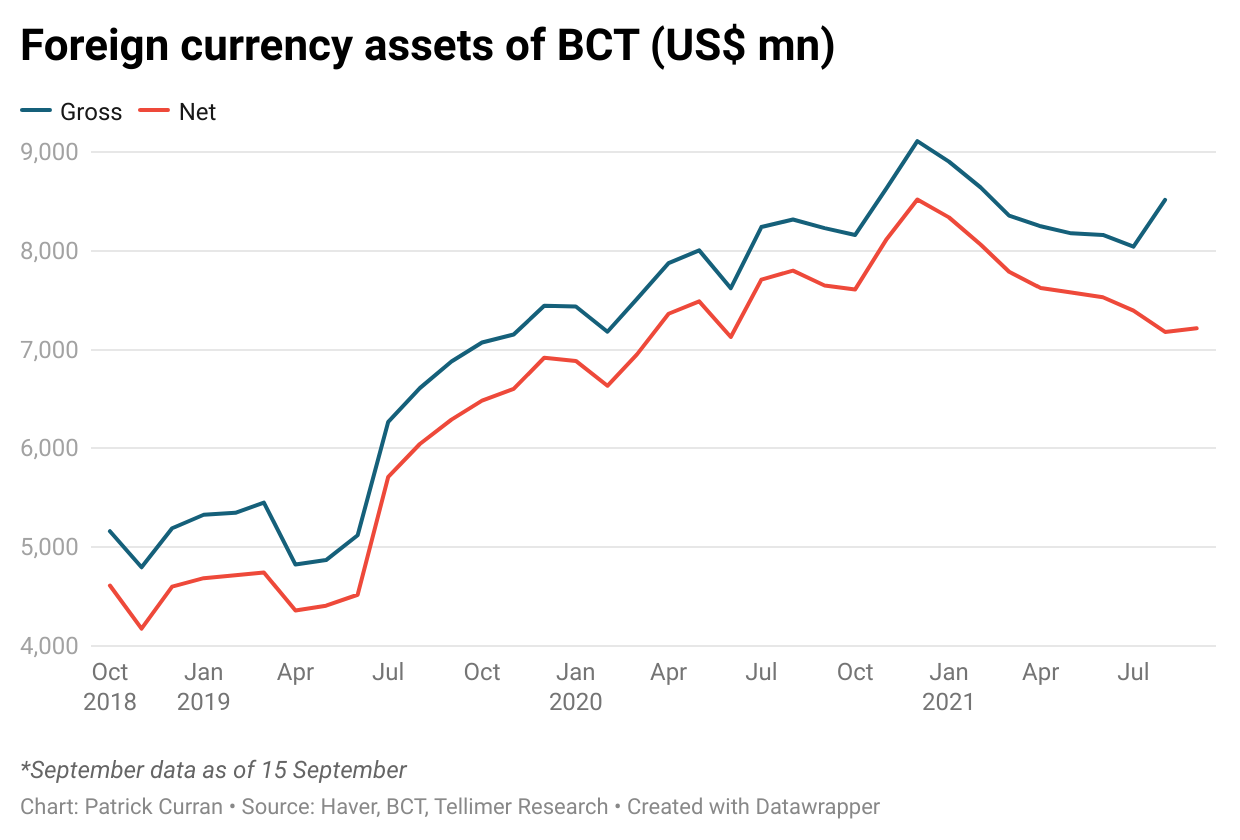 In turn, much of the funding required to fund its BOP deficit will be contingent on securing an IMF programme. With Tunisia’s current account deficit projected to average US$4.5bn from 2021-26 and external public amortisations averaging US$2.25bn, Tunisia will have to secure at least US$6.75bn of funding annually to keep reserves stable. And with limited prospects for FDI (which reached just 1.5% of GDP in 2020) and market access constrained (with Tunisia likely locked out of the eurobond market), this financing will have to come from bilateral and multilateral sources.

Against this backdrop, the need for Tunisia to secure an IMF programme is clear. However, even if Tunisia secures an IMF programme and unlocks bilateral funding, there is no guarantee that restructuring can be avoided, as the IMF may require a restructuring if it does not see debt as being sustainable. The Paris Club, too, may require PSI to extend any debt relief or financial support.

The Hold recommendation on Tunisia’s 2025 eurobond last month balanced what we saw as downside risks to eurobond pricing (based on a 20% probability of default and 65% chance of an IMF programme) with the potential upside if an IMF programme was secured. But with the IMF programme and reforms seemingly on the backburner, the upside catalyst has been removed for the time being.

For completeness, we re-run the scenario analysis from August with the same five scenarios but re-weighted probabilities (now with a 40% probability of default and 50% chance of an IMF programme): 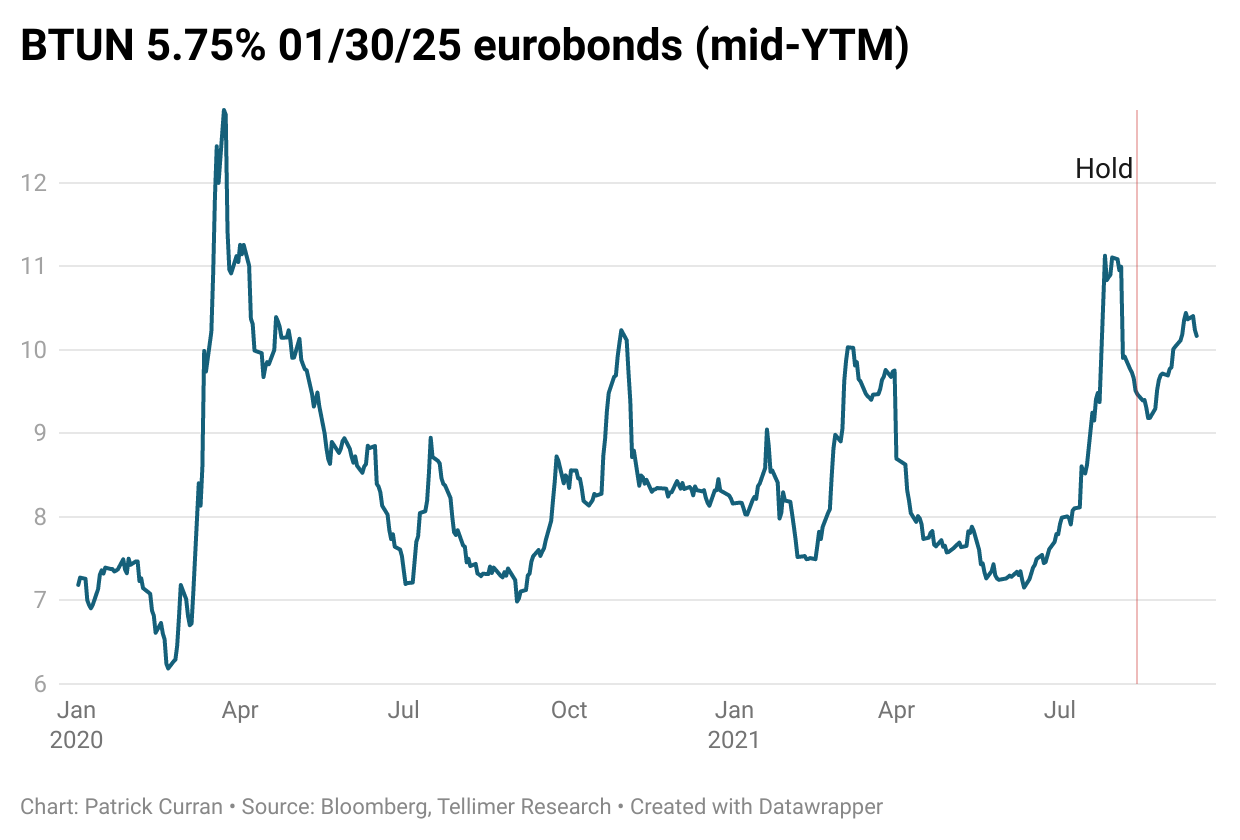