Tunisia held its parliamentary elections on 17 December amid a boycott by most major opposition parties and outside observers. The election marks the final step in the consolidation of one-man rule by President Kais Saied, coming in the wake of: 1) his July constitutional referendum, which was unilaterally drafted by Saied and his close allies and passed with turnout of just 30.5% of eligible voters; 2) a new electoral law that effectively gave Saied control of the electoral commission; and 3) a new cyber law that has squashed dissent and prompted many journalists to opt out of election coverage to avoid arrest.

In the event, only 11.2% of Tunisia’s 9.1mn eligible voters participated in the election. This is slightly higher than the 8.8% initially reported after the electoral commission added in over 200,000 votes that it claimed had not previously been counted, but is still one of the lowest participation rates in modern history for a major national election. Amid an accelerating shift to autocracy and mounting economic woes, the near nationwide boycott of Saied’s sham election is a clear expression of dissatisfaction and disassociation from the Tunisian electorate.

The electoral commission was only able to announce winners for 23 of the 161 parliamentary seats (of which 10 only had a single candidate), with run-offs to be held for 131 seats on 20 January and seven districts fielding no candidates (it is unclear how these seats will be filled). Further, the electoral commission’s spokesman told reporters that final results might not be announced until 3 March if some candidates appeal the outcome. When parliament does convene, it will be nothing more than a rubber-stamp legislature, after Saied’s new constitution consolidated many of its previous powers under the presidency.

It is hard to view the election as anything other than a flop for Saied, with many opposition figures now calling on him to step down. But, while the path forward for Saied and his political agenda is increasingly uncertain, he is unlikely to be deterred by the poor turnout. He has vehemently rejected any criticism of his consolidation of power, lashing out against even the tepid criticism of US officials during his visit to Washington last week and accusing “foreign forces” of trying to destabilise the country.

At the same time, the Board review for Tunisia’s US$1.9bn, 48-month IMF programme has been postponed from its initially scheduled date of 19 December, reportedly to give the government more time to finalise its reform programme. We have long said that it would be difficult to implement the prior actions needed to secure Board approval and even more difficult to keep the programme on track, but the latest delay gives new life to those concerns.

With Saied’s position weakened by the poor election turnout and growing criticism at home and abroad, it will be even more difficult for his government to deliver on its reform promises. While the government has already reached a three-year wage agreement with the powerful public sector union (UGTT), the UGTT has stepped up its rhetoric against the remaining austerity measures (including subsidy cuts and state-owned enterprise reform), with Secretary-General Noureddine Taboubi warning the UGTT is “fighting a social battle and will not back down” and vowing to resist “colonialist economic policy choices".

Further, although the UGTT did not explicitly boycott the election, it has stepped up its criticism of Saied’s political agenda, with Taboubi recently saying that “We no longer accept the current path because of its ambiguity and individual rule, and the unpleasant surprises it hides for the fate of the country and democracy". With opposition from the UGTT to Saied’s political and economic agenda on the rise and constructive dialogue having seemingly broken down, it will be incredibly difficult to implement the reforms required under Tunisia’s IMF programme.

To make matters worse, Saied himself has seemingly soured on the IMF-backed reform agenda, recently saying that “The solutions to our problems cannot be solved only by numbers, nor by the [IMF], nor by any other fund” and that no foreign actors can “impose solutions on us, nor their own alternatives to our problems". We have always said (see related reading, below) that Saied’s focus is political reforms, with any economic reforms undertaken out of necessity rather than ideology, but these statements confirm our worries that Saied may sacrifice the economic reform agenda to preserve his waning political capital.

Growing policy discord has delayed the passage of the 2023 Finance Law, which will codify many of the prior actions for the IMF programme and is likely the key driver of the delayed Board review. Official data shows some moderate slippage in 2022, with the budget deficit projected to reach 7.7% of GDP versus the 6.7% target. Slippage is less severe than we had initially projected given the sharp rise in subsidy spending, which reached a projected 8.3% of GDP in 2022 versus a 5.3% target and 4.6% outturn in 2021 but implies an even more difficult starting point and highlights the urgency of subsidy removal.

Despite the better-than-expected fiscal performance, the economic backdrop continues to deteriorate. Delayed subsidy payments and lack of FX are leading to shortages of food and medicine. The current account deficit widened to US$3bn over the first three quarters of 2022 from US$1.9bn in the same period last year. Net FX reserves have fallen to US$6.96bn (three months of imports) on 20 December from US$8.08bn (4.5 months of imports) at the end of 2021. Inflation has continued to climb, to 9.8% yoy in November from 6.6% at the end of 2021, and shows little sign of slowing.

While the IMF implicitly projects that Tunisia’s external financing gap over the next four years will be plugged, this is conditional on the approval and successful implementation of the IMF programme. With Tunisia locked out of the external debt market, it is increasingly reliant on donor support to fund its budget (donations are projected to come in at more than double the initially budgeted TND1.1bn in 2022, mainly from the US and EU). However, recent political developments threaten the IMF programme and associated bilateral and multilateral funding from the West.

Indeed, a Bloomberg op-ed yesterday argued that the US should threaten to suspend aid and use its effective veto power at the IMF if Saied refuses to step down. While the US response to Saied’s power grab has so far been tepid at best, the pending IMF review gives it leverage and the chance that it uses it to exert political pressure has increased in the wake of this weekend’s shambolic election. Further, a reduction of aid from the West may be enough to push Tunisia’s fragile balance of payments into crisis, so a full suspension and IMF veto may not be necessary to trigger a balance of payments crisis (although this would make one inevitable, as we have long argued).

We upgraded our recommendation on Tunisian eurobonds from Sell to Hold in mid-June at US$56.6 for the TUNIS 5 ¾ 01/30/2025s after they dropped near our estimated US$50-54 recovery value. After declining to US$53.1 in mid-July at the height of the broader EM sell-off, the '25s rallied sharply to a peak of US$76.9 at the beginning of December, making Tunisia the best-performing EM credit of the year at the time. The rally was driven by broader EM strength, as Tunisia clawed back its underperformance earlier in the year, and rising hope that an IMF programme would be secured.

However, the bonds have dropped sharply over the past week amid broader weakness in the high-yield EM complex and rising political uncertainty at home, with the ‘25s dropping from US$75.9 on 14 December to US$70.65 as of cob on 20 December. We think this correction is justified, with the sharp H2 rally for Tunisian eurobonds outstripping the country’s still-shaky fundamentals.

Given rising political uncertainty and risks to the IMF Board’s approval of its pending programme, risks are skewed to the downside despite the recent correction (for illustrative purposes, our recovery analysis in June estimated a base-case recovery value of US$50-54 at exit yields of 12-14%, a downside recovery value of US$32 and upside of US$86 if Tunisia avoids default, equating to a target price of US$54-57).

As such, we downgrade our recommendation to Sell on the TUNIS 5 ¾ 01/30/2025s at US$70.65 (24.4% YTM, 1999bps z-spread) as of cob on 20 December, with Tunisian eurobonds likely to continue to reverse the gains from their near world-beating rally in H2 as markets price in increased political uncertainty and the risk that its IMF programme is not secured (or is eventually derailed). 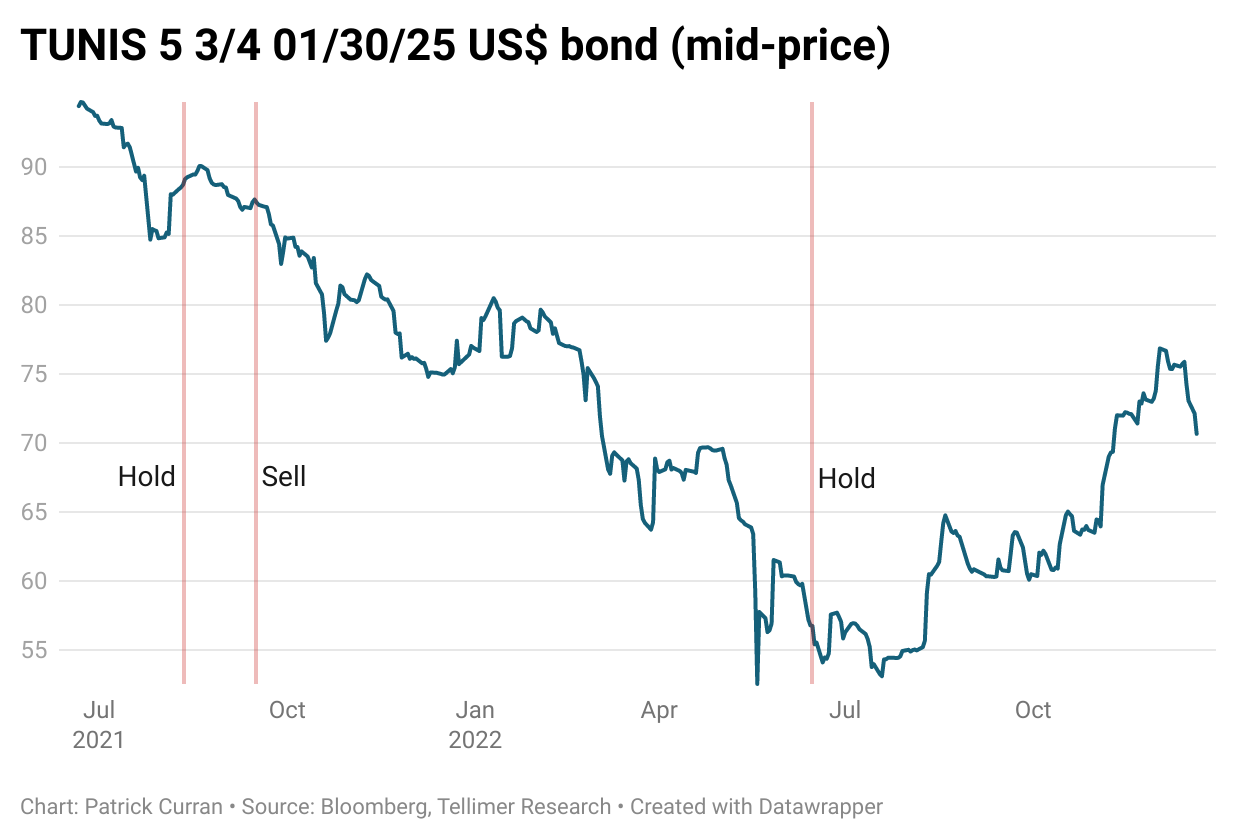 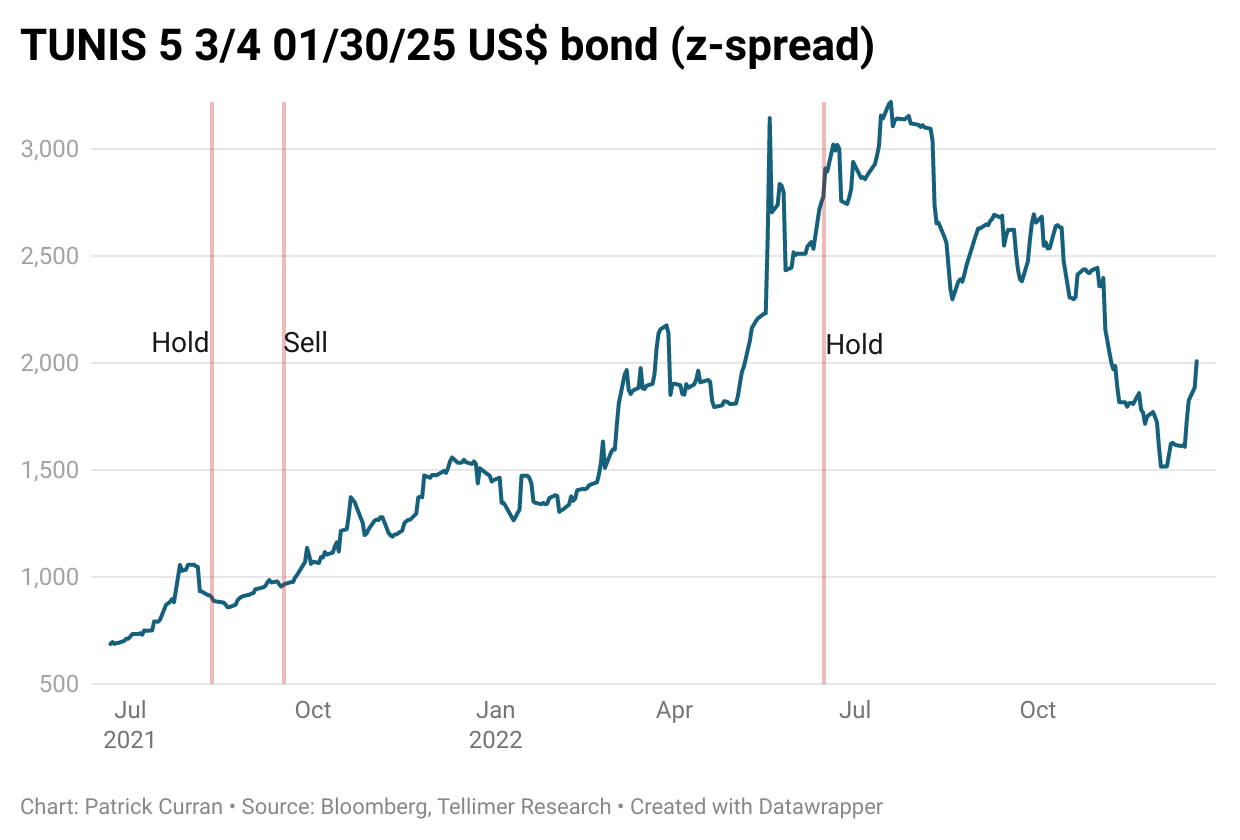