TSMC as key to chips as Middle East is to oil; a pointer for Biden's priorities

TSMC on its own is as important to the semiconductor industry as the entire Middle East is to the oil industry. The Middle East always seems to take up a lot of attention for an incoming US president but, as Joe Biden is inaugurated into office, his foreign policy team may be more focused on the Taiwan Strait than the other traditional supply chain choke points of Hormuz, Malacca, Panama and Suez.

TSMC is the largest stock in the global EM index, the largest and most advanced outsourced semiconductor manufacturer and, arguably, right in the middle of the long-term tussle between the US and China over control of the Taiwan Strait and the technology supply chain.

With TSMC's share price up almost 90% in the past year and consensus forward PE its highest in over a decade, at 28x, there may be more questions as to whether it is priced to perfection (ie continuing high growth of the hardware device industry and TSMC's own technology leadership) and whether there is sufficient neutral ground for it to navigate between the two countries, which drive c60% (US) and c20% (China) of its revenues (ie manageable regulation and uninterrupted transport access). 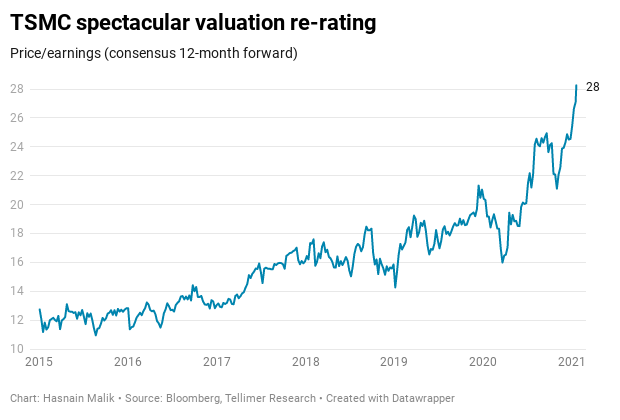 TSMC accounts for 6.4% of the MSCI EM equity index: 10% more than all of LatAm (ex-Mexico), 60% more than the GCC, 90% more than Africa and well over double that of Russia. That might suggest that a lot of human capital is being misallocated in the investment management and advisory industry. It certainly confirms the danger of the rush to passive fund management: TSMC was less than half its current weight five years ago. 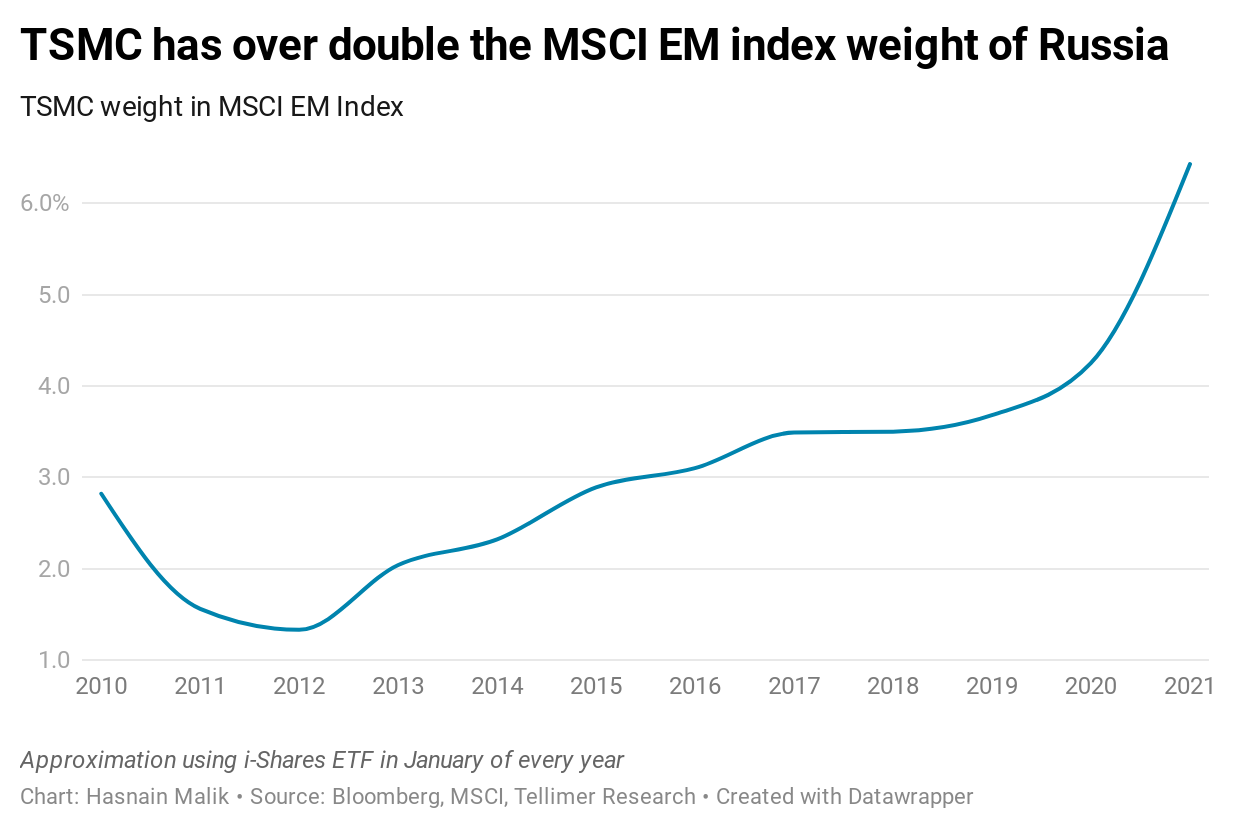 TSMC is more dominant in its segment than any single company in any other part of the global technology hardware supply chain. It has c55% market share of all semiconductors manufactured on an outsourced basis. Its installed manufacturing and capex roadmap (outlined on 14 January, with c55% capex growth yoy compared with expectations of flat capex) implies perhaps a two-to-five-year advantage on the likes of Samsung and Intel, let alone pure foundry players like UMC or SMIC. 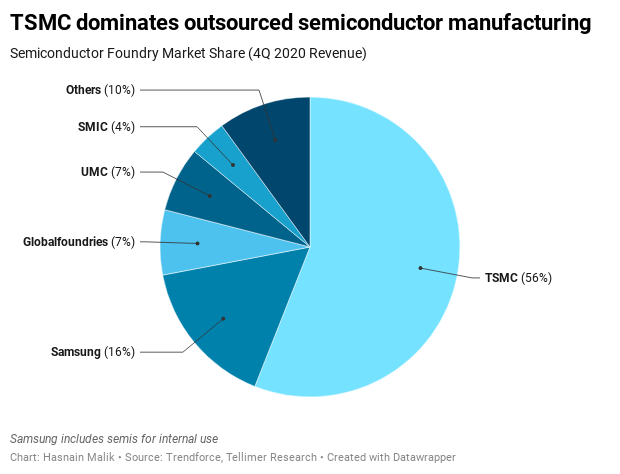 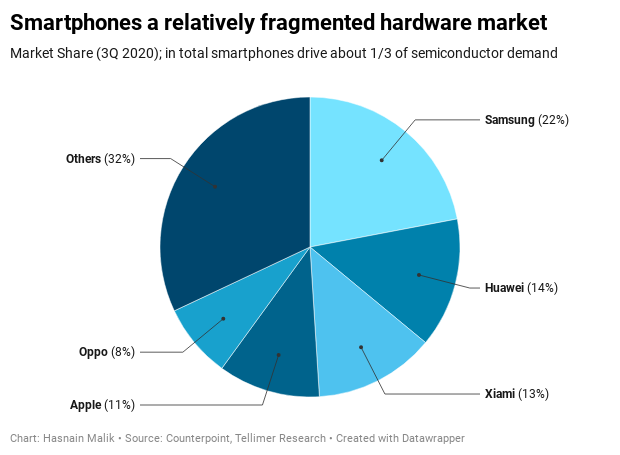 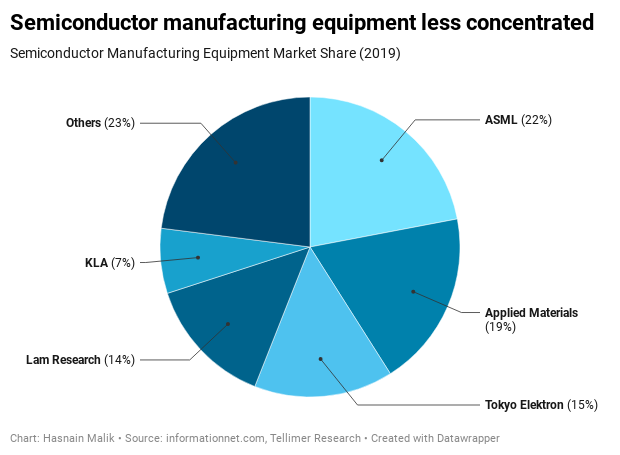 In the global crude oil market, the largest producer is the US, with a 19% share, and the top six combined are c57%. The largest share of proven reserves with the lowest cost of extraction is in the Middle East, with a 17% global share for Saudi and c50% for the combined top six in the region. 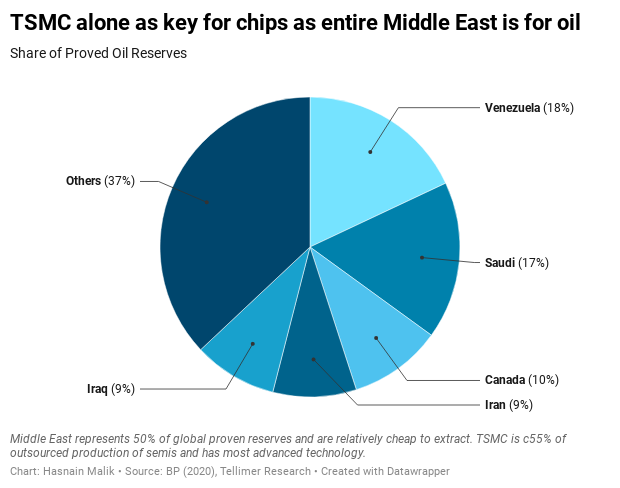 But in the middle of US-China risk

But c80% of TSMC capacity is located in Taiwan (its China, Singapore and US sites are both much smaller in aggregate capacity and tend to use older generation technology by the time they are fully online). This is a reminder that Taiwan and the Taiwan Strait will remain geopolitical bones of contention between China and the US for the foreseeable future as much as Chinese hardware manufacturer access to TSMC and other non-China domiciled semiconductor manufacturing and intellectual property suppliers. 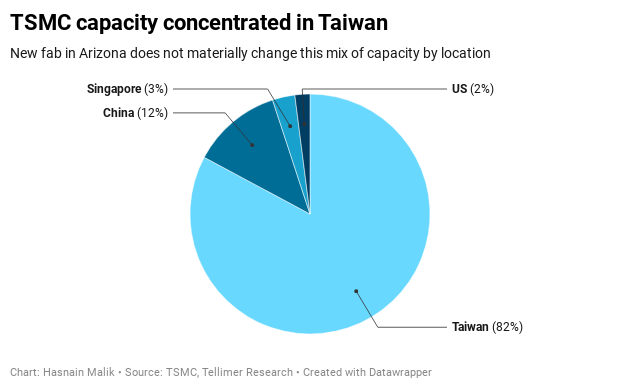 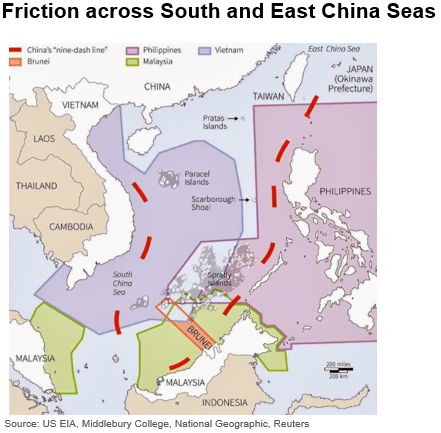