The creep towards a cold war between the US and China is inevitable, given that both are of a size that brings them into competition across trade, technology and territory, and neither has the will or resources to settle the rivalry decisively. The recent frostiness seen on multiple fronts is in line with our expectations.

For investors in emerging markets, some of the negatives (eg increased China territorial friction with ASEAN rivals in the South China Sea, weaker China FX rate) might be offset by positives (eg another bout of US tariffs on China that accelerates both the transition of low-end manufacturing away from China to other, more geopolitically onside, low-cost locations like Vietnam, and reinvigorated implementation, from the Chinese side, of BRI projects in countries like Pakistan).

But one area where the lack of coordination between the US and China has already played out is the global policy response to Covid-19 and the credibility of an international organisation tasked with that coordination, the WHO, that has been weakened (by both sides, arguably).

Another global policy challenge where this friction may act as an outright negative is on coordinated debt relief for poorer countries in EM (eg Ghana, Kenya, Nigeria, Tanzania, Zimbabwe in Africa or Pakistan in South Asia).

China is a signatory of the 15 April G20 communique on the debt service suspension initiative for poorer countries; an unprecedented bilateral agreement that promises coordinated action. But the agreement is subject to well-worn implementation and compliance risks, which are more acute when two of the largest providers of bilateral debt are increasingly distrustful of each other:

1) China's lack of transparency over the full extent of its debt exposure via state-affiliated entities (an issue for Europe as much as the US) – one team of academics estimate that 50% of China's lending to emerging markets is not reported to the IMF or World Bank;

2) The lens of the Belt and Road Initiative through which China may view debt relief (which may conflict with US priorities); and

3) China's willingness to participate in a multilateral approach over which it does not exert dominance. 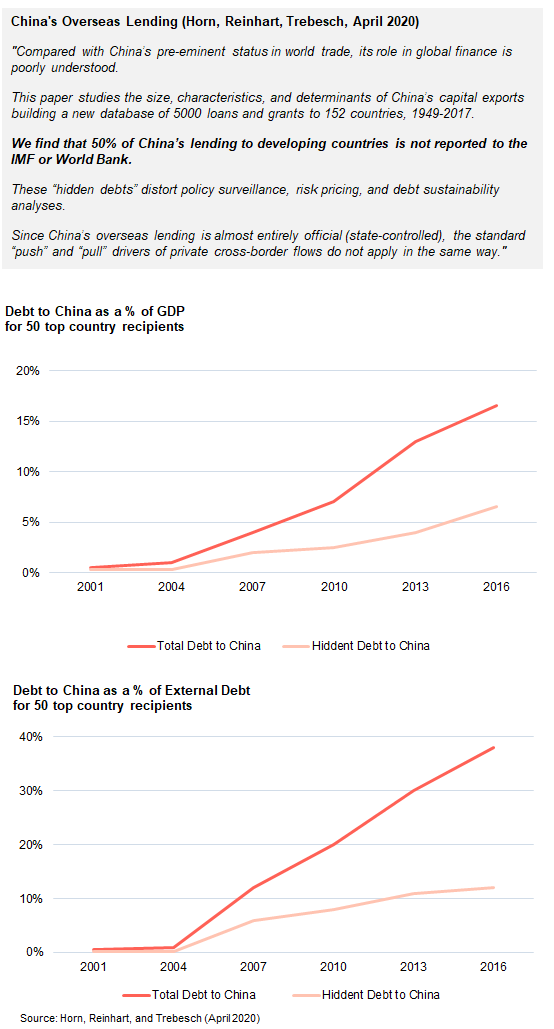 In the context of US President Trump's re-election bid (November 2020), which has unexpectedly been imperiled by a deficient response to Covid-19, rhetoric may be matched by more more meaningful action (eg new tariffs or sanctions). The rhetoric from the Trump administration has recently included blaming China for covering up Covid-19 (both its origin and its threat), compromising global organisations like the WHO (and therefore freezing its funding, where the US provides 22% and China 12%) and engaging in predatory lending and investment practices (eg in a warning repeated most recently to Israel on the need for more thorough scrutiny of Chinese inward investment).

China President Xi has the benefit of a longer-term mandate (courtesy of the removal of term limits and an authoritarian political apparatus) and a sooner return to domestic social and economic normalcy after Covid-19 (regardless of the credibility of official data on infections). This likely makes for at least as much action as rhetoric; since the start of the year there has been friction between China and territorial rivals around the Nine-Dash Line in the South China Sea (Indonesia, Malaysia, Philippines, Vietnam) as well naval brushes with Japan and Taiwan.

This is not to say that President Xi is impervious to unfavourable rhetoric from the US: to the degree that it infects either domestic opinion (the renewal of Xi's terms as party leader and president are due in October 2022 and March 2023, respectively) or international relations (eg with recipients of Chinese finance currently hoping for global debt relief and assistance), we expect at least a reciprocal rhetorical response. 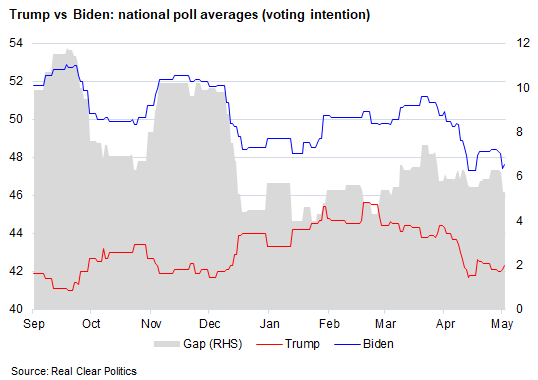 Trump impeachment or election loss: what would it mean for emerging markets, 14 October 2019

Philippines: US to China rebalance continues, not cause for alarm, 12 February 2020