As we outlined in our curtain-raiser report, the key macro themes that persisted throughout the recent IMF/World Bank Annual Meetings – which we were glad to be able to attend in person, for the first time in three years – included slower global growth and higher inflation, tighter global financial conditions and rising debt vulnerabilities (especially with the rising risk of debt distress in many frontier and low income countries) and what to do about them, including improving the debt restructuring framework and new lending tools.

Meanwhile, on the ground, the new – central bank digital currencies (CBDCs) – and the old –climate change – also featured prominently in the policy discussions.

On the growth front, global growth projections in the new WEO were unchanged relative to the July update at 3.2% in 2022 but revised down by 0.2% in 2023 to 2.7%, bringing the downward revisions since the full April WEO to -0.4% and -0.9%, respectively. Downward revisions were more severe for advanced economies (AEs), with 2023 growth revised down by 0.3% since July and 0.9% since April compared with just 0.1% and 0.7%, respectively, in emerging market and developing economies (EMDEs).

Global growth is projected to reach 2.7% of GDP in 2023 (1.1% in AEs and 3.7% in EMDEs), but the IMF sees a 25% chance that it falls below 2% and projects a “technical recession” (ie two consecutive quarters of negative qoq growth) for one-third of the global economy by GDP in either 2022 or 2023. Despite relatively stronger growth forecasts, though, economic scarring is still expected to be more severe in EMDEs than AEs, with 2024 output still 6.2% below the pre-Covid trend in 2024 in EMDEs versus 2% in AEs (excluding the US). 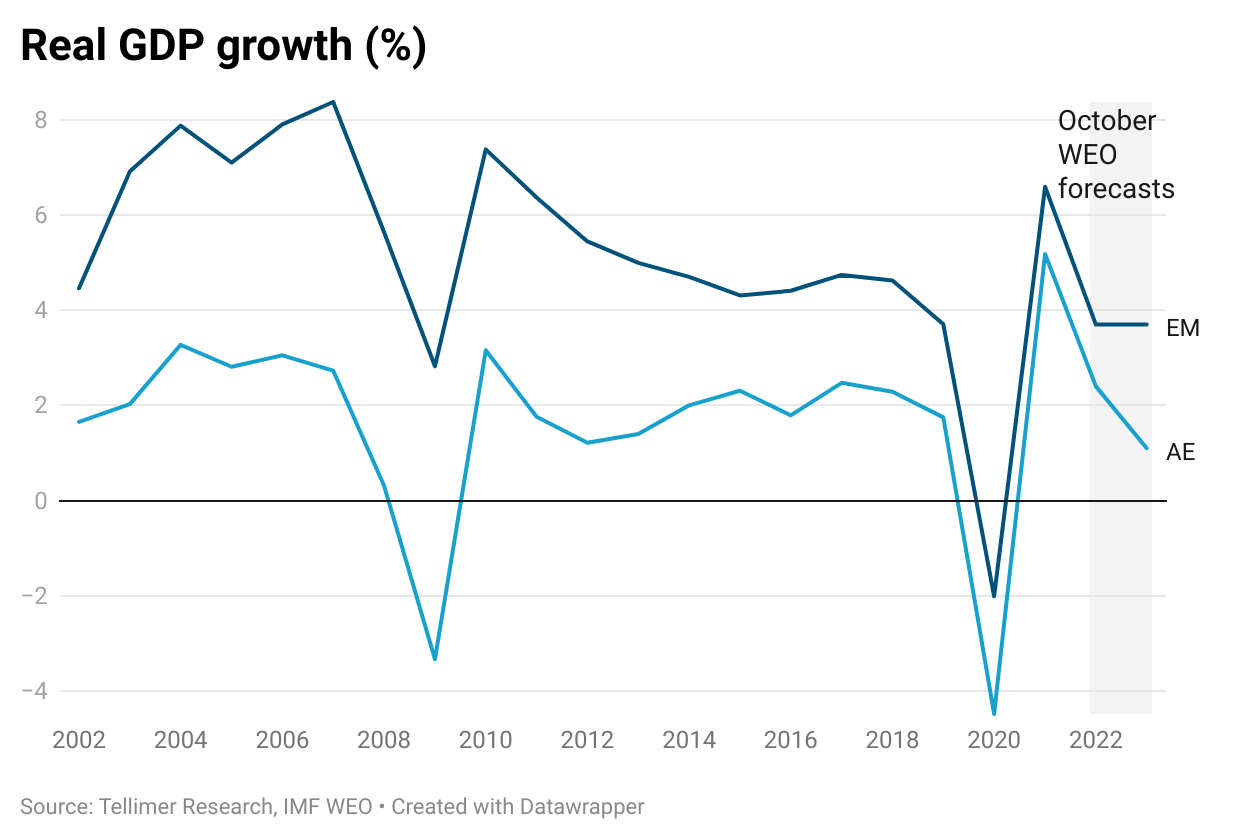 And inflation forecasts have once again been revised up to 8.8% in 2022 (7.2% AEs, 9.9% EMDEs) from 8.3% in July and 7.4% in April, and inflation is projected to decline but remain elevated at 6.5% in 2023 versus the 4.8% projection in April. Further, risks are skewed firmly to the upside, stemming from volatile food and energy prices and the war in Ukraine, among other things, raising the risk that large forecast errors continue in the months and years ahead.

While the IMF still assesses the risk of a de-anchoring of inflation expectations and a wage-price spiral as being contained, an even tighter monetary policy stance may be required moving forward if inflation proves more persistent than currently expected. This could tighten financial conditions for EMDEs even further, with the yield on the EM sovereign index already reaching a record 9.25% (excluding the exceptional pandemic/global financial crisis periods) and 30 countries in the index yielding double digits.

As such, the risk of debt distress in EM (especially among smaller EM and frontiers) will remain elevated, not only if yields increase but even if they simply stabilise at current levels (with many EMs already locked out of the market and struggling to meet large external funding needs). This topic was at the fore in many of our discussions, with many people wondering who might be “the next Sri Lanka”. Countries that garnered the most concern included Pakistan, Ghana, Egypt, Kenya and Tunisia, among others, although this is largely already reflected in current bond prices, while some smaller island economies (the Bahamas and Maldives) are also seen as in the mix. Nigeria, too, was dragged into the discussion by comments from its finance minister that mistakenly alluded to a desire for debt restructuring, forming a hot topic in after-hours conversations.

Against this backdrop, there was an increased sense of urgency for many countries to secure IMF-funded programmes to plug their funding gaps, with many seizing the opportunity to hammer out face-to-face discussions. Indeed, Tunisia departed DC with a staff-level agreement in hand and Egypt received one soon after, Ghana seemingly made progress towards a programme (although in Ghana’s case, and mistakenly in our opinion, investors were disappointed that more wasn’t said), Bangladesh initiated discussions on the new resilience and sustainability facility (RSF) facility (following Rwanda’s and Barbados’ lead), Pakistan continued discussions to renegotiate the programme in light of the recent flooding, and Malawi subsequently reached staff-level agreement on a disbursement under the new food shock window and programme monitoring with board involvement. Others, like Ethiopia and Lebanon, seemingly made little progress at all.

With debt distress looming for many EMs, there remains an active discussion about refining the framework for sovereign debt restructuring for smoother and more timely resolution ahead of a potential wave of defaults. As we saw at the Spring Meetings, there is broad consensus that the Common Framework for debt restructuring was not working, given the lack of participation and persistent delays (with Ethiopia stuck in the mud, Chad’s restructuring request seemingly put on ice (although, since the Annual Meetings, an agreement has surprisingly been reached) and Zambia’s bondholders pushing back against apparent flaws in the debt sustainability analysis (DSA)/restructuring process), amid the usual finger-pointing as to who is to blame (with many singling out China as the key hurdle in the restructuring process and others, erroneously we think, citing private creditors).

And although there may be some consensus on how to improve the Common Framework, and the IMF has made some recommendations on this – supported by the IMFC – including expanding its scope beyond low income countries, it may still come down to implementation, while the recommendations may come too late to help existing cases. Conversely, they may fall short of the deeper overhaul that some think is required.

This raises the risk that future restructurings will be similarly drawn out. Zambia and Sri Lanka will be important test cases in this regard (respectively within and outside the Common Framework), with delegations for each country conducting a whirlwind of meetings with the key stakeholders during the week in an attempt to move their cases forward.

Overall, the tone at the Annual Meetings was quite grim, an observation that even the IMF managing director Kristalina Georgieva admitted in recent comments, despite the pleasure of seeing all the familiar faces in person again. Slowing growth and stubbornly high inflation, tight global financial conditions and rising debt sustainability risks are likely to make for a difficult path for EMs, and especially more vulnerable countries, in the months ahead, at the very least, and potentially even longer.

As such, while many investors seemed to buy into the view that the ongoing sell-off has unlocked pockets of deep value, few, if any, were willing to say that we have reached the trough, with financial conditions likely to continue tightening until the Fed reaches its terminal rate and global inflation has durably slowed.