In the commodity space, oil prices are rising for the fifth straight session this morning, finding support from China’s promises to repair its economy from the damage caused by the latest lockdowns. At the same time, supply issues have resurfaced in Libya. The OPEC+ member’s oil production has declined by more than 500k barrels a day in recent days, and there is the risk that we could see more disruptions there as political protests continue.

It is a bit of a mixed bag for the noble metals. Palladium is trading lower while platinum has recorded mild gains on the session. Both metals remain focused on the supply dynamics out of Russia and the potential substitution effects that will take place in the coming months/years as palladium supplies out of Russia become more difficult to integrate into the global supply chain.

Egypt: In a move aimed at easing pressure on the country’s fiscus stemming from fuel subsidies, the government has hiked the price of gasoline for the fifth consecutive month amid rising international oil prices. The Petroleum Ministry increased the prices of all types of gasoline by 3% while keeping steady the prices of diesel used for the transport of commodities and of mazut used for strategic industries such as food and electricity. The decision to raise gasoline prices comes on the back of soaring international oil prices, driven higher by supply concerns, and a sharp devaluation in the currency.

Zambia: The New Heritage Party has challenged the government to reveal its plan if the outcome of the Debt Sustainability Assessment and Creditors Committee discussions does not succeed in light of the complexity of creditor coordination. Party President Chishala Kateka told reporters that there seems to be an impasse or obstacle in the discussions with Zambia’s creditors, adding that the IMF has been waiting for the Debt Sustainability Assessment and the outcome of the Creditor’s debt relief discussions. Kateka has called on the government to share its plans for the way forward should the $1.4bn IMF bailout package not actualise and what plans it has for the repayment of the $750 Million Eurobond that is due this year in September. While an IMF deal is unlikely to be signed off in the near term, we remain optimistic that Zambia will manage to finalise a deal with the IMF towards the end of this year or next year once it has sorted out issues with its creditors.

Kenya: Some positive news for households and businesses in Kenya, the three-week-long fuel shortage appears to be easing as supplies improve at fuel stations after the government raised domestic fuel prices. The acting cabinet secretary of the Ministry of Energy and Petroleum has blamed the shortage on oil marketing companies hoarding the product awaiting mid-month price reviews to cash in. The government raised the price of petrol and diesel by $0.09 to $1.25 and $1.09 respectively in the capital. The easing of fuel shortages will help bolster supply chains in the country and provide a boost to consumer and business sentiment, which remains dampened on the back of heightened inflation pressures. That said, the fuel price hike is expected to push inflation to a new high in April after touching 5.6% y/y in March.

Zambia: China's new ambassador to Zambia Du Xiaohui has arrived in Zambia to further strengthen ties between the two countries. The Chinese envoy arrived on Sunday and was received by representatives from Zambia's Ministry of Foreign Affairs and International Cooperation as well as officials from the embassy, according to a statement posted on the embassy's website. Investors will be closely monitoring new scrollers for any comments on China’s stance towards Zambia’s debt. Recall that China is one of the main creditors reportedly standing in the way of Zambia’s debt restructuring and one of the main components needed for Zambia to conclude a deal with the IMF.

South Africa: The full scale of devastation of the floods in KwaZulu Natal is only now being understood, and with over 400 people dead and huge amounts of infrastructure decimated, it is clear this will impact the SA economy, and a massive reconstructive effort will be needed. As a result, President Ramaphosa restored the national state of disaster to allow the government the flexibility to urgently prioritise repairing the damage to the ports and surrounding infrastructure. While this may offer opportunities for the construction companies, the fiscus will need to accept yet another burden to stretch the fiscus further.

Forex: Pressure on the Egyptian Pound remains acute, USD-EGP to consolidate for now 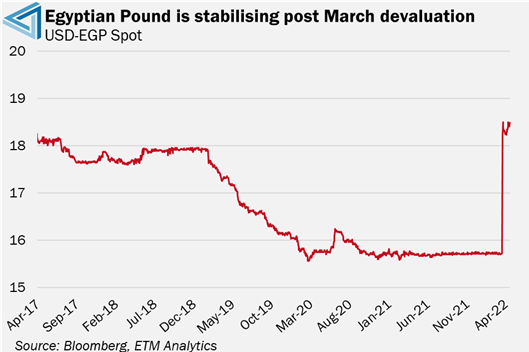 On the trade front, soaring international oil and agriculture prices and a decline in tourism due to the war in Ukraine are weighing on the country’s trade account, while the global shift in monetary policy in conjunction with reports of a new accord with the IMF are weighing on foreign demand for Egyptian assets. As highlighted in previous reports, Egypt has been one of the hardest-hit countries by the outbreak of the war in Ukraine, with the country heavily dependent on imports and tourists from the two countries.

While risks to the outlook for the Egyptian Pound are decisively bearish, the country’s reserves remain robust together with the devaluation in the currency last month, which saw the currency lose more than 15% against the USD, suggests that the USD-EGP is likely to continue trading around current levels in the near term. That said, should external headwinds intensify, we do see risks for another devaluation in the Egyptian Pound by the central bank.

While traders invested in inflation-linked bonds are benefitting handsomely from the global surge in inflation, sovereign debt servicing costs have increased markedly. Soaring inflation is buoying inflation-linked bond yields, while the hawkish shift in monetary policy is driving up vanilla linked bond yields. The combination of which has resulted in a significant increase in debt servicing costs for governments across the globe.

The combination of ongoing supply chain pressures and soaring commodities has pushed global inflation to its highest levels in years. For context, Bloomberg’s World Economy Weighted Inflation Index rose above 8% y/y in April, up from around 3% y/y a year ago. The sharp rise in global inflation has prompted a hawkish shift in monetary policy across the globe, with most major developed market and emerging market central banks raising rates to combat soaring consumer prices. 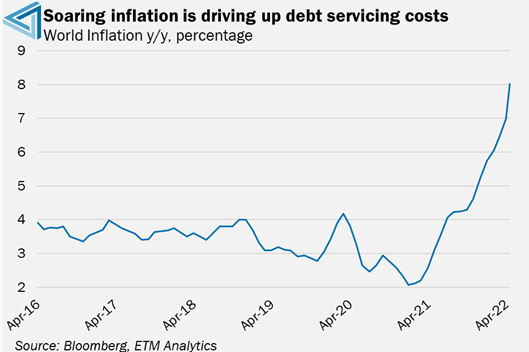 While central banks have begun to raise interest rates, inflation risks across the globe remain elevated amid ongoing supply shortages, which are underpinning international commodity prices, particularly food and energy prices. Bloomberg’s Commodity Index, which we use as a benchmark for international commodity prices, reached its highest level in a decade this week. With no sign of easing inflation pressures, which is underpinning the hawkish shift in monetary policy across the world, we expect debt servicing costs for governments to remain elevated throughout the remainder of the year.

From an investor's perspective, with inflation pressures expected to remain acute in the near term, investors will continue to benefit from holding a proportionately high position in linker bonds. As mentioned in previous commentary, while we have seen central banks raise interest rates aggressively to ease inflation, the current bout of strong inflation is primarily driven by supply-side price pressures. Therefore, until supply-side price pressures ease, inflation is expected to remain robust in the months ahead.

Against the backdrop of tightening monetary policy, the war in Ukraine, soaring inflation, persistent supply chain pressures and China’s covid-zero policy, the World Bank lowered its 2022 global economic growth forecast on Monday. The World Bank now expects the global economy to expand by 3.2% in 2022 compared to its previous projection of 4.1%. This comes on the back of global growth of 5.7% in 2021.

The World Bank’s global growth revision was announced before policymakers from around the world head to the US this week for the spring meetings of the World Bank and the International Monetary Fund. Policymakers are expected to discuss the number of crises facing the global economy, with the main focus set to be on inflation and Russia’s invasion of Ukraine.

The World Bank President David Malpass said in an interview on Monday that the combination of downside economic risks is expected to drive up global poverty rates as countries worldwide face sudden increases in energy, fertiliser, and food prices. Moreover, the World Bank head said that rising interest rates are expected to slow growth and exacerbate inequality. This is expected to be even more pronounced in Africa than in other parts of the world.

The focus for traders in the session ahead will be on the release of the International Monetary Fund’s World Economic Outlook, which is scheduled to be published today. The report will provide an in-depth update and forecasts on key economic and fiscal metrics for African countries.