We highlight Venezuela as a trade to watch next year on increasing hopes of political reconciliation, economic reform and an easing in US sanctions ahead of elections in 2024 and possible regime change. However, despite some recent positive steps, we remain sceptical at this very early stage that this will lead to credible, free and fair elections, and a democratic transfer of power, so this may not translate yet into durable gains in bond prices.

Optimism has followed what has been seen as a greater international effort urging the Maduro regime to return to the negotiating table with the opposition and holding out the prospect of an easing in US sanctions on Venezuela. This came amid a new diplomatic push by the Biden administration earlier this year in support of the removal of broad sanctions in favour of targeted sanctions after the failure of the 'maximum pressure' policy, albeit reports of an easing in US sanctions on Venezuelan oil to fill the gap caused by the Russian oil ban attracted criticism due to political expediency.

The new effort has met with some success so far. Mediation talks between President Maduro’s regime and the opposition Unitary Platform, facilitated by Norway, resumed in Mexico on 26 November after Maduro effectively suspended them over a year ago. Maduro had stated his willingness to return to negotiations during a US visit in March 2022, albeit later adding conditions which could have stifled progress. Concurrently, the US Office of Foreign Assets Control (OFAC) authorised Chevron to resume limited oil extraction operations in Venezuela under General Licence (GL41) on 26 November. The licence, for an initial period of six months, allows Chevron to produce and export oil but doesn’t allow new drilling.

But it is not clear the US is willing to go further in relaxing its swathe of sanctions on Venezuela, with those on primary market activity and secondary market bond trading of most importance to investors. Moreover, the license really only allows Chevron to get paid on its outstanding debt and may not result in broader easing or a more substantive boost to Venezuela’s overall oil exports (Chevron produced c15,000 barrels per day (bpd) before sanctions forced it to half operations, according to media reports). Venezuelan oil production was 690,000bpd in November, according to Bloomberg data, and has averaged 765,000bpd this year compared with 530,000bpd in 2021.

And nor is it clear that the talks between the government and opposition will continue in a straight line. Maduro has stalled the talks before and there are no guarantees that progress is irreversible.

Still, the international carrot-and-stick approach aims to leverage sanctions relief to incentivise Maduro to negotiate a path toward free and fair elections in 2024. It also recognises the fading support on the ground for interim president Juan Guaido, who is still recognised as such by the US administration (if not the EU and others), due to fatigue and some improvement in the domestic economy. Venezuela saw positive real GDP growth last year for the first time since 2013, albeit only at 0.5%, and it is expected to pick up further this year to 6%, according to the IMF WEO. Meanwhile, inflation is expected to fall to a still-high 210% this year from its recent hyperinflation.

However, it is still uncertain to us whether Maduro is truly willing to accept moves towards free and fair elections in 2024 – which he is likely to lose – let alone holding them, or whether his moves so far are just an attempt to buy time, extract what he can, before stalling later and seeking to divide the opposition again.

As such, an easing of US financial sanctions ahead of 2024, which could extend to allowing US investors to trade Venezuelan bonds, is not assured while the sanctions themselves prevent a restructuring or any negotiations and discussions on the debt with the Maduro government (despite the regime’s reported willingness to sit down with bondholders).

Still, Venezuelan bond prices have responded positively to these developments. The VENZ 27s have risen by c30% over the past month (based on Bloomberg prices) – to cUS$9.0 (mid), although it is not clear on how much volume in an illiquid and distorted market because of the secondary market trading ban on US investors. However, the bonds remain in deeply distressed territory, with prices in the single digits across the curve.

As such, defaulted Venezuelan bonds may still look attractive – for patient and risk-tolerant investors – on expectations of regime change. Prices may be seen as being well below recovery values under some plausible restructuring scenarios, especially if oil reserves backstop recoveries, although a huge international and financial effort will be required to rebuild the country and its institutions, while debt-carrying capacity will initially be extremely limited and it will take time to ramp up oil production.

In sum, recovery prospects – and the path to restructuring and the time it takes – remain highly uncertain. However, investors have some compensation as the claim continues to accrue PDI (over 40pts by now, on our estimates). That said, we understand the expiry of the six-year prescription period since default under the statute of limitations is closing in the next year, presenting another risk to bondholders. 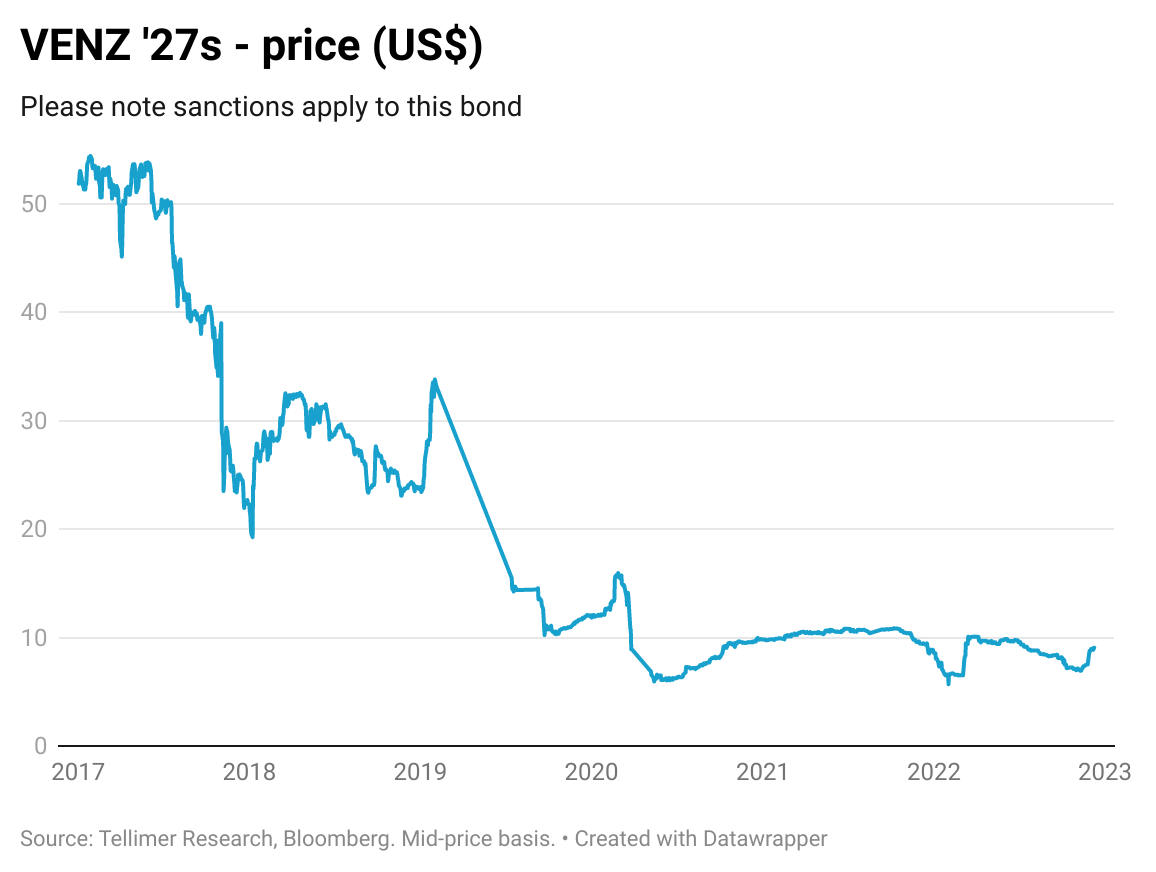