We noted in our trades to watch for 2022 last year that the outlook for Ukraine bonds may be determined in Moscow as the threat of conflict with Russia weighed on investor sentiment. Sadly, this proved right. The unnecessary war has exerted a huge toll on the Ukrainian people, loss of life and destruction of the country. Our thoughts remain with Ukraine.

We keep Ukraine as a trade to watch for 2023 as it seems next year will be no different. The war has entered its 10th month, as hopes for a quick peace have been repeatedly dashed, and the conflict shows no sign of ending. In fact, the war has intensified in recent weeks as Putin reacts to Ukraine's military gains and its retaking of Kherson in early November with sustained missile strikes and attacks on Ukraine's infrastructure, including its energy grid, perhaps in a last-ditch war of attrition (see here and here). Meanwhile, the crucial winter period (for both sides) is here.

The mainstream international community will hope that its continued support for Ukraine (diplomatically, militarily and financially), along with Russia’s military losses (and its economic collapse), will – absent a military victory for either side (however that is defined) – lead Moscow to a negotiated peace that is acceptable to Kyiv. Putin, meanwhile, may hope, absent a military victory, that a prolonged war will lead to divisions in the western alliance and war fatigue that he can exploit. However, the risk of miscalculation and escalation (and use of tactical nuclear weapons) remains.

The war could end tomorrow. Or it could continue for some time. But we do know that it means Ukraine will continue to require substantial external financing in both the recovery and the reconstruction phase. The IMF's new programme monitoring with board involvement (PMB), seen as a precursor to a fully fledged programme when conditions allow, will help catalyse the tens of billions of dollars in external financing that Ukraine needs. It is expected soon to go to the Board after staff-level agreement was announced on 23 November (approval of Ukraine's new PMB is on the IMF Board schedule for 19 December).

For bondholders, despite the government's efforts to remain current for as long as possible, the war eventually eroded ability to pay – as we had expected – the longer it went on. Investors are now in wait-and-see mode following the debt service freeze that was agreed by consent solicitation in August. When conditions allow, attention will then shift to the debt sustainability analysis and debt service capacity, around which there is currently huge uncertainty, to inform what debt reprofiling or restructuring will look like and what this means for the bonds. The IMF projects public debt to reach 87.8% of GDP by end-2022, and to stabilise around that level under the baseline, although its updated debt sustainability analysis (DSA) shows a wide range of potential outcomes. 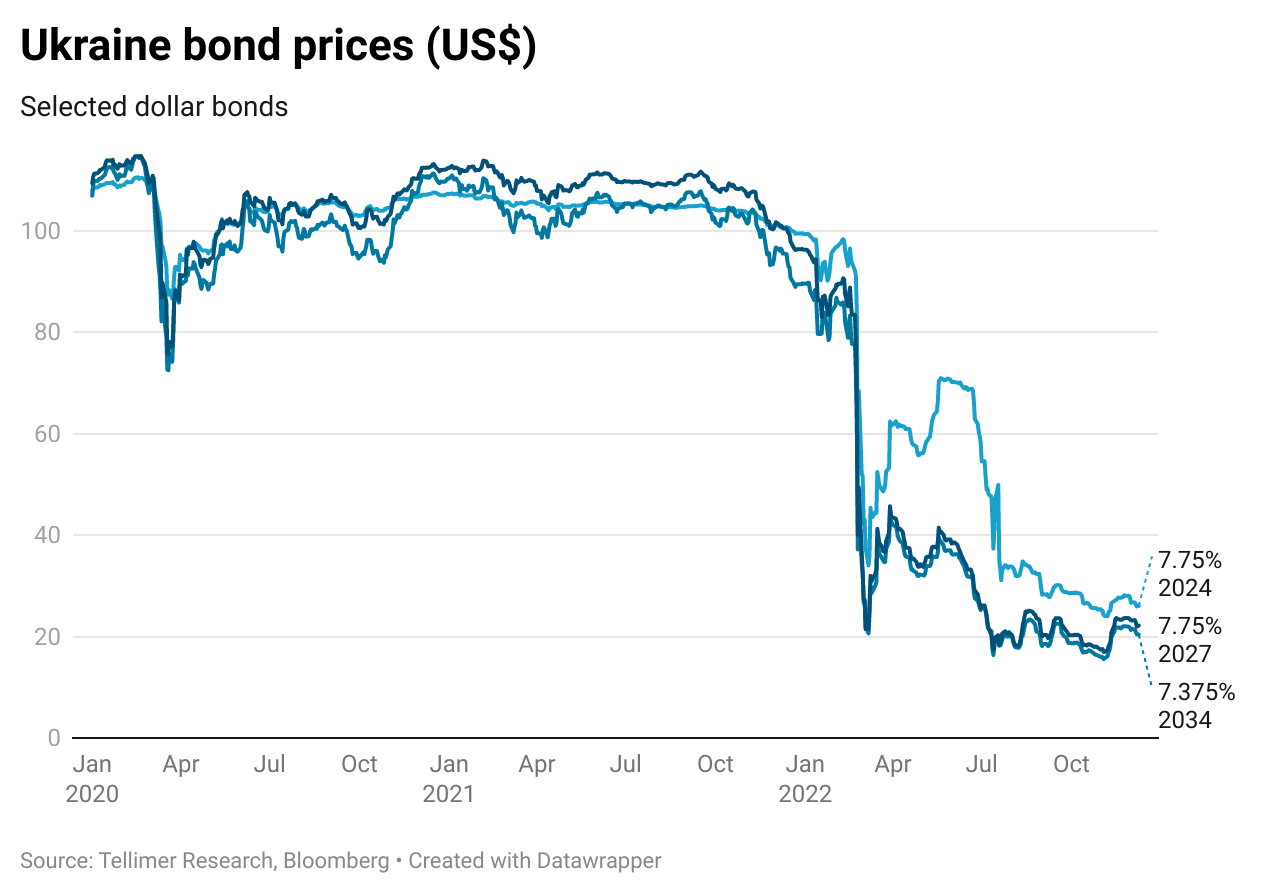