We’ve had a Buy recommendation on Rwanda since September 2020, first on the RWANDA 6 ⅝ 05/02/2023s (which had US$340mn of the total US$400mn outstanding tendered in July 2021) and then, since August 2021, on the RWANDA 5 ½ 08/09/2031s (with 55% of its proceeds used to tender the ‘23s). We calculate a total return on the ‘23s from when we initiated our recommendation until they were tendered of 9.3%, greater than the 2.3% return on the Bloomberg EM Sovereign Index over that period. However, since we initiated our recommendation on the ‘31s they have performed in line with the market, delivering a -18.1% total return versus -18.9% for the Bloomberg EM Sovereign Index.

At just US$77.9 (9.26% YTM, 605bps z-spread) as of cob on 7 December, we think the ‘31s look attractive on a valuation basis. For context, the bonds traded at a z-spread of 429bps when they were issued and as low as 345bps in September 2021, meaning spreads have widened by 260bps from post-Covid lows versus just 122bps for the Bloomberg EM Sovereign Index and 205bps for the Bloomberg EM Sovereign High Yield Index.

On the one hand, part of the underperformance in spread terms is justified by Rwanda’s fundamentals, with large gross external financing needs (stemming from a current account deficit that is projected to reach 12.6% of GDP this year), a wide budget deficit (estimated at 8.7% of GDP in FY 21/22) and a large debt burden (with gross debt including guarantees expected to exceed 75% of GDP in FY 22/23 and to remain above the 65% of GDP anchor until FY 28/29, after adjusting for changes to Rwanda’s borrowing terms – see below).

Encouragingly, the IMF classified Rwanda as being at a “moderate” risk of debt distress during its latest DSA in December 2021. However, this classification has also negatively impacted Rwanda’s ability to access concessional financing by prompting the World Bank to switch the balance of new financing from 50% loans/50% grants to 100% loans, which will widen Rwanda’s budget deficit and public debt by a cumulative 6.6% of GDP relative to the previous baseline from FY 22/23 to FY 30/31. Rwanda’s ability to run such consistently large fiscal deficits has hinged in large part on the concessional nature of its borrowing, so a reduction in grants over time makes fiscal consolidation all the more urgent.

Rwanda will also eventually run out of room to continue financing such large current account deficits, with the IMF stressing the need for greater exchange rate flexibility to absorb shocks in the interim. In the 2021 Article IV, the IMF estimated Rwanda’s exchange rate to be 23% overvalued based on a “current account norm” of -7.3% of GDP and 2021 deficit of 12.1% of GDP, which would rise to 25% based on the projected 12.6% of GDP deficit in 2022. Structural reforms are also needed to improve the business climate and boost competitiveness, which will help bring Rwanda’s endemically large current account deficit in line with fundamentals and prevent a BOP crisis.

On the other hand, Rwanda has a number of things in its favour. Performance under its three-year policy coordination instrument (PCI) with the IMF has been commendable, with all targets met through December 2021 (except the one on inflation, and most with delays) and fiscal consolidation projected to exceed the target by a cumulative 1% of GDP in FY 21/22 and FY 22/23. Further, Rwanda still enjoys a robust growth trajectory, with real GDP growth projected to rise from 6% in 2022 to 7.5% by 2025, and public debt is projected to peak at 76% of GDP in 2024 and decline gradually thereafter as Rwanda reins its budget deficit (notwithstanding the shift from grants to loans).

Lastly, on 12 December Rwanda received IMF Board approval on a new 36-month PCI and resilience and sustainability facility (RSF) worth US$319mn, making Rwanda the first African country to reach an SLA to access the IMF’s new resilience and sustainability trust (RST). The new PCI/RSF ensures reform continuity ahead of the previous PCI’s expiration in June 2023 and will help solidify Rwanda’s fiscal consolidation efforts, with an additional focus on strengthening its monetary policy framework and supporting longer-term structural reform and resiliency efforts.

If Rwanda continues to perform under its new IMF programme, then spreads could continue their downward trend and make up some of the more recent underperformance relative to Rwanda’s HY peers. Conversely, failure to deliver on Rwanda’s ambitious fiscal consolidation plans and rein in its large current account deficit could lead to an unsustainable rise in vulnerabilities in the coming years, so Rwanda’s margin for error remains quite thin (especially with less access to concessional financing). That said, after the successful tender in 2021, there are no major eurobond maturities until the US$620m payment in 2031, which should limit rollover risks if global financial conditions remain tight.

Overall, we continue to think that Rwanda is an attractive investment opportunity given its strong fundamental outlook, notwithstanding its elevated external vulnerabilities, and maintain our Buy recommendation on the RWANDA 5 ½ 08/09/2031s at US$77.9 (9.26% YTM, 605bps z-spread) as of cob on 7 December. 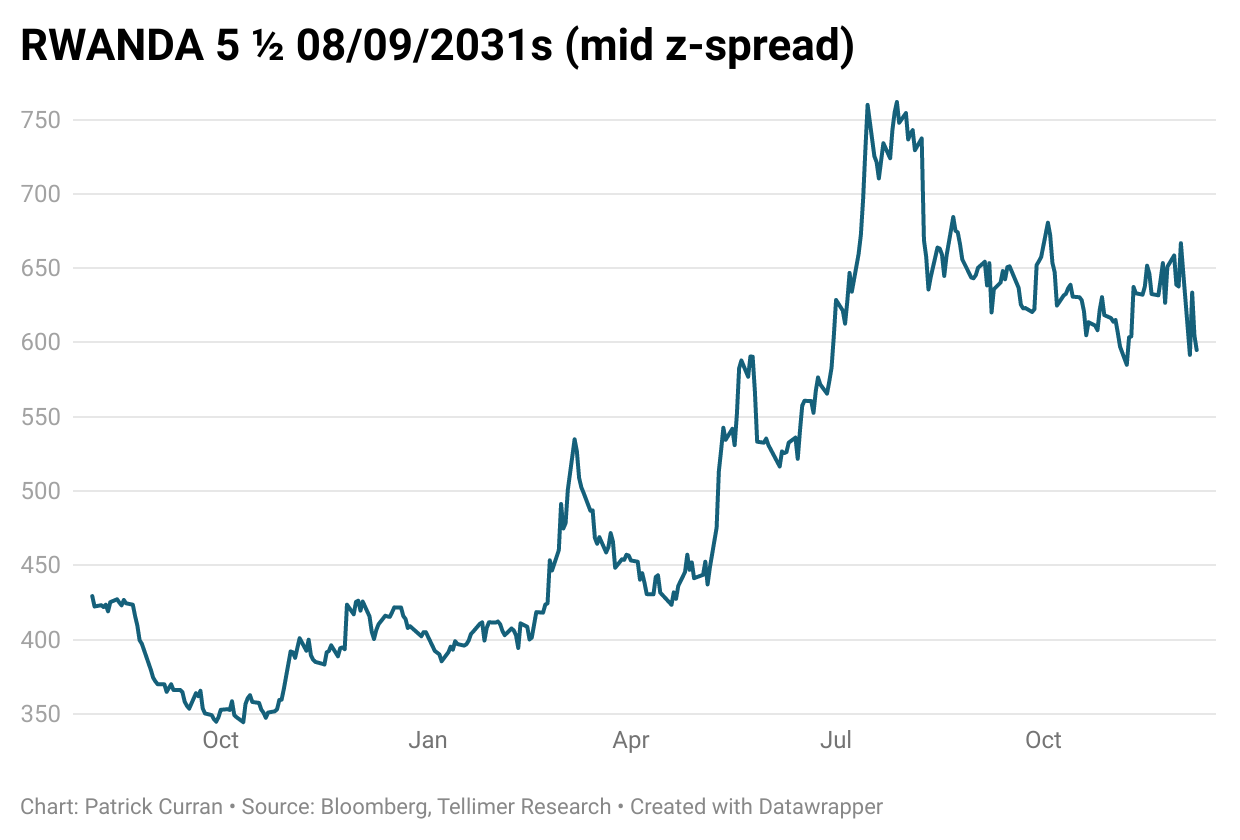