Trade to watch: Local debt plays in Uganda and Zambia

With the US Fed projected to pivot in 2023, many are predicting the end of the strong dollar cycle. This has been the consensus for the past two years and has proved spectacularly wrong. However, if it turns out to be true this time around, then local currency EM government debt should be set for a strong year. While we are reluctant to call time on the dollar – see here for a thorough explanation why – it may still be an attractive time to go selectively long on local currency debt in countries where real rates are high enough to provide a comfortable cushion against the risk of persistent dollar strength. 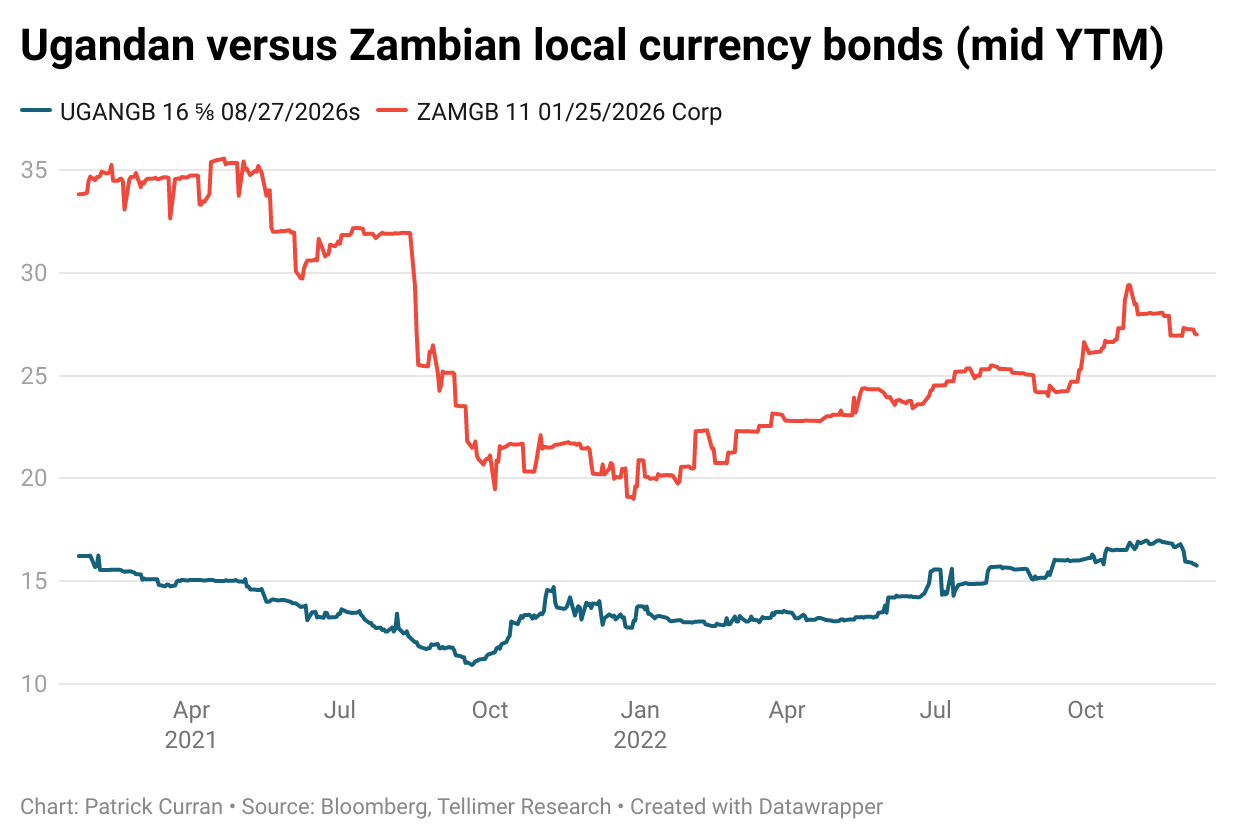 Yields are relatively less attractive on both a nominal and real basis in Uganda and there is a risk that the currency is overvalued, but we think Uganda has one of the more positive fundamental stories in sub-Saharan Africa and its local currency debt is an attractive way to gain exposure (as it doesn't have any foreign bonds). With nominal yields of c16%, there is ample space to absorb currency depreciation, and, with inflation projected by the IMF to fall to 6.8% by the end of 2023, there is also scope for duration gains if the central bank loosens its policy stance. Further, the trade is far less crowded in Uganda relative to Zambia (with non-residents holding c7-8% of domestic debt in Uganda versus c25% in Zambia).

In Zambia, nominal and real yields are much higher and provide significant cushion against further currency depreciation. However, Zambia’s current account has swung from a 7.9% of GDP surplus in Q1 and 2.6% surplus in Q2 to a 4.9% deficit in Q3 2022 (based on official data, which varies widely from the IMF’s estimates), meaning that ZMW will likely remain under pressure, after falling 11% since the beginning of September. Further, while the government and IMF maintain that domestic debt will not be restructured (indeed, this was the basis for our Buy recommendation), there is a risk that it gets dragged in if the gap cannot be bridged between the IMF’s and bondholders’ views of the appropriate debt sustainability analysis (DSA) thresholds.

In this case, bondholders may require the inclusion of domestic debt in the restructuring to reduce the amount of net present value (NPV) relief required by external creditors, given what many now view as an excessively high 49% NPV haircut stemming from the DSA (assuming there is not a lot of overlap between eurobond holders and non-resident holders of domestic debt). Overall, our confidence that it will be excluded from the restructuring has diminished in recent months, and our ZMW outlook has also softened due to the erosion of Zambia’s large current account surplus.

We think the risks are now more finely balanced for Zambia’s domestic debt, with high nominal and real yields making for an attractive trade opportunity and providing a significant cushion against the risk of continued ZMW weakness but the growing risk of its inclusion in the debt restructuring and of balance of payments weakness triggering further ZMW depreciation creating large downside risks. As such, we downgrade our recommendation on the ZAMGB 11 01/25/2026s from Buy to Hold at US$67.5 (27% YTM) as of cob on 7 December on Bloomberg.