2023 is an election year in Argentina and, as always, it will be a trade to watch as investors hope for regime change (or to put it another way, Argentina is a trade to watch, and always will be). Argentina was one of our trades to watch for 2022 on the basis that progress towards an IMF programme could be a positive catalyst for the bonds (the '30s were trading at cUS$35, on a mid-price basis, a year ago). But, while the IMF approved a new programme in March, it wasn't the catalyst we might have expected – Argentina has suffered a total return of -20% this year (a bit worse than the index) in the Bloomberg EM Sovereign USD index, and that was from its already depressed levels.

Still, the IMF programme remains on track, which is itself some achievement, with the Fund announcing staff-level agreement on the third review of the extended fund facility (EFF) on 2 December (following completion of the second review in October), although the real challenge may still be to come as we move into 2023 and elections (presidential and congressional).

An election year in Argentina could bring opportunity as well as the usual uncertainty. It is too early to call, and it will be a while before we know the runners and riders (some presidential candidates might want to leave it late to see which way the wind is blowing), ahead of the primaries in August (the presidential election first round is in October).

Incumbent president Alberto Fernandez, of the ruling centre-left Frente de Todos (FdT) coalition, could run again under the Peronist umbrella but seems to lack the political capital to win and, while his current vice president Cristina Fernandez de Kirchner (CFK) has said she won't run next year, she is expected to remain influential. Economy Minister Sergio Massa, who is regarded as having done a good job since his appointment in July, could be the preferred choice of the moderate Peronists (and could be received reasonably favourably by investors), but whether he needs and would get CFK's support is unclear (and it might be better if he does not!). She might favour her son Maximo (needless to say, a victory for any CFK-backed candidate, as unlikely as it seems, would be seen as disastrous by investors).

But it is the centre-right opposition alliance, Juntos por el Cambio (JxC), that is leading the polls and in a good place after inflicting a heavy defeat for the government in the 2021 mid-term elections, although who will win its selection is unclear (Rodriguez Larreta, Patricia Bullrich, even former president Mauricio Macri have all been mentioned), while Liberals outsider Javier Milei, who is third in the polls, could present a threat to the main parties (and have influence in any alliance or run-off). That said, with Alberto Fernandez's and CFK's low approval ratings, it seems like JxC's to lose – and victory for the market-friendly centre-right party, with a strong mandate, would be welcomed by investors. The opposition's biggest challenge may be complacency.

Still, whoever wins, they will enter the Pink House with an economy in a mess – current policies are unsustainable. We are unlikely to see any substantive improvement between now and then, as the current government seeks to do enough muddling through to get re-elected (and defer tough decisions until its second term, if it tackles them at all) – although if it hits a wall before then, it could be curtains for their chances. Hence, even Massa would confront a greater challenge (although he may enjoy wider Peronist support to do something about it, if left alone by the Kirchnerite faction).

If JxC wins, it may enjoy more international support but could rapidly use up its domestic political capital trying to fix the economy and unwind the imbalances it would inherit (with echoes of the rise and fall of Macri's presidency in 2015-19) and, what it could achieve, and whether it could implement difficult reforms, will depend in large part on how much support it has in Congress (the government lost control of Congress in the mid-terms but remains the biggest party in both houses). Congressional deadlock (a JxC presidency but without Congressional control) could be negative for reform prospects.

Crucially, the next administration will also face a massive uptick in debt service payments on Argentina's restructured bonds – as the principal that was deferred through maturity extension and grace periods in the 2020 deal starts to come due, in size. This is as well as dealing with inflation heading towards an annual rate of 100%, a dollar shortage and an overvalued currency (the blue chip rate is at a 100% premium over the official rate). 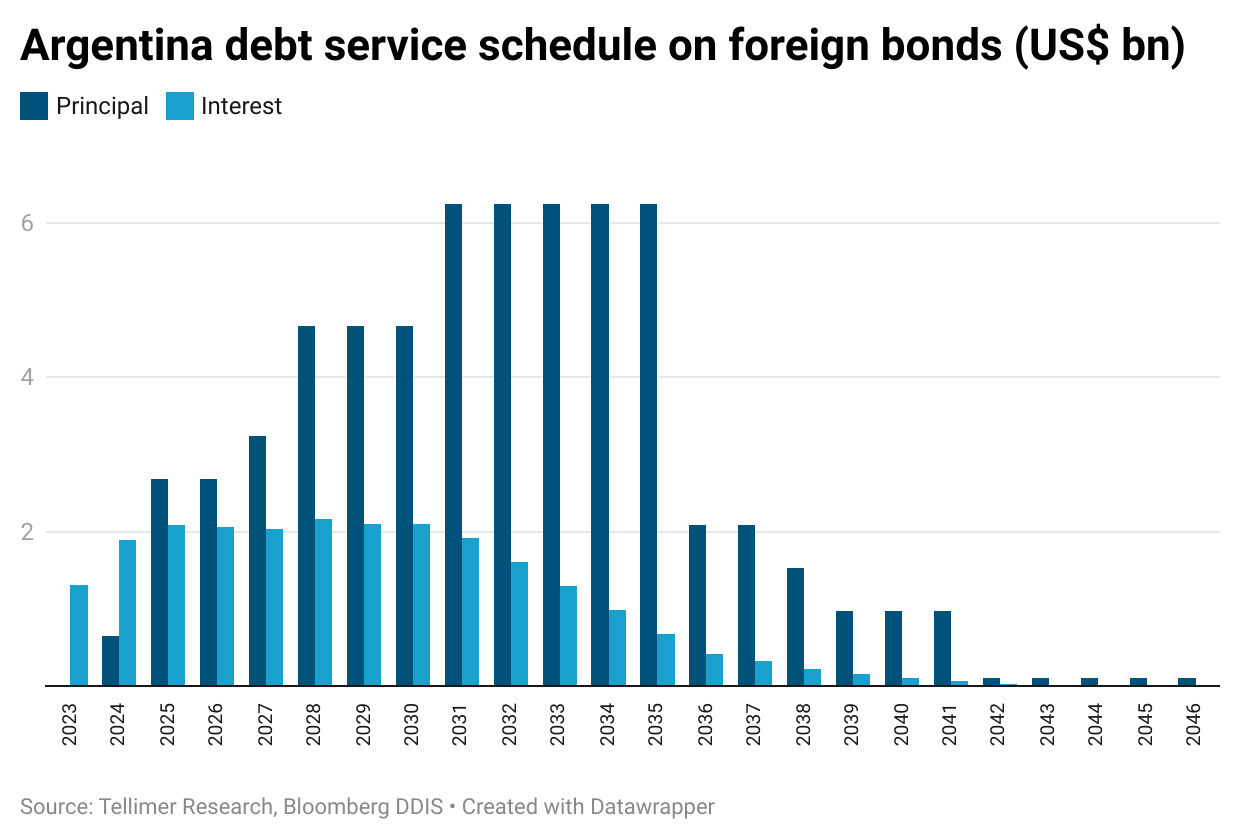 Without a drastic change to the economic model, it is not clear where the money will come from, hence market concerns about another default and re-restructuring under the next government (one might argue that the government that created them wouldn't default on them while the market-friendly opposition wouldn't want to default either, but we guard against being too sanguine).

We maintain our Hold on Argentina's US$ bonds, with the 2030s priced at US$26.0 (yield of 36.8%) as of cob 7 December on Bloomberg (mid-price basis). We acknowledge that the bonds could be poised for significant upside on regime change under a more market-friendly government (JxC, or even Massa, under the right circumstances), especially if it gains a strong mandate.

For instance, even if the yield on the '30s falls to 16%, still c200bps wide of Tellimer's estimated Frontier market yield of 14% (and wider than the HY yield of c10.5% on the Bloomberg index), that implies a price of US$53 (100% upside). However, this might not become clear until the second half of the year. 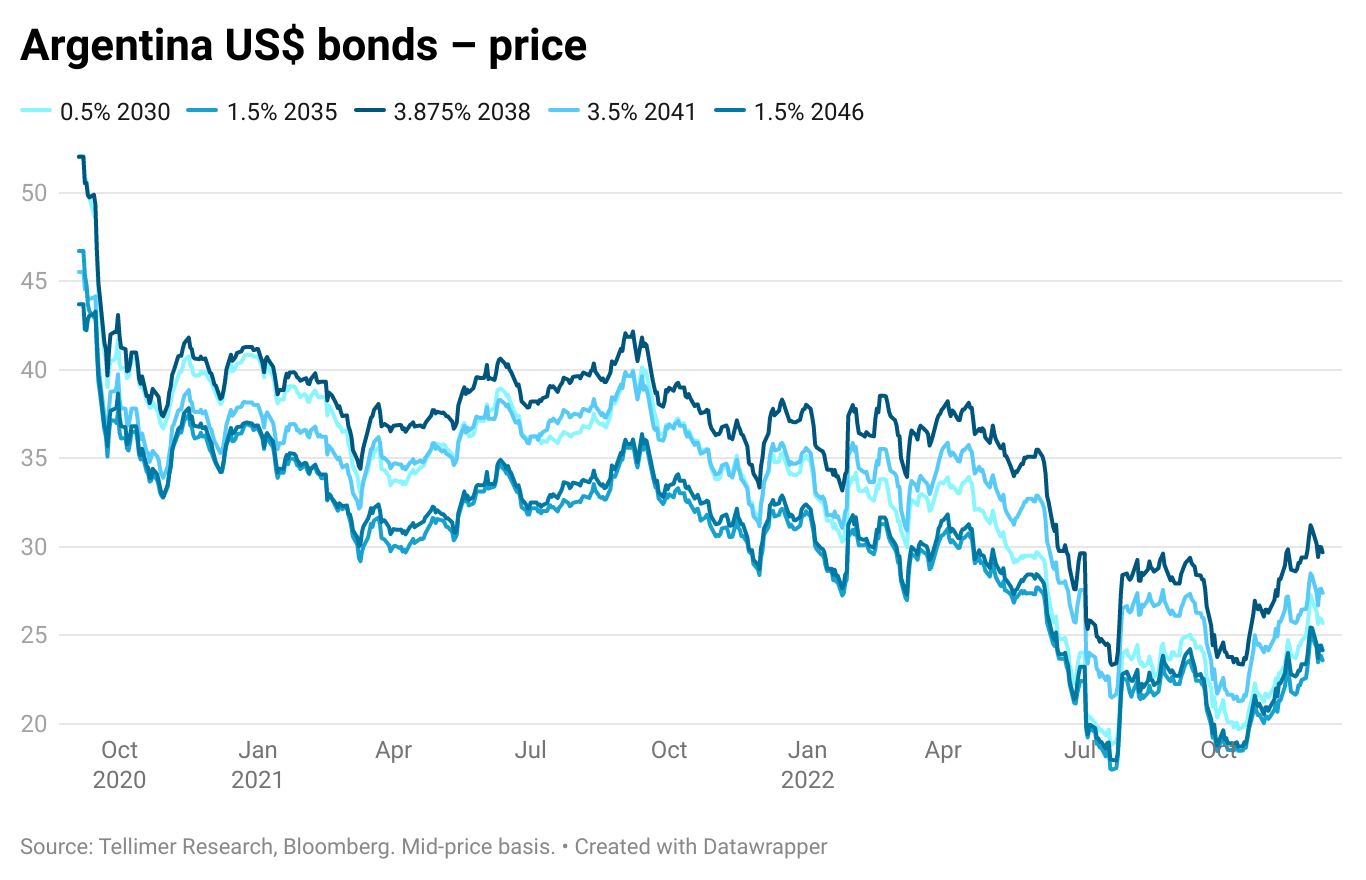