US$3,957.2 million deficit, stringing three consecutive months in negative territory. This was lower than consensus and our estimate. Exports and imports rose 20.2% and 31.7% y/y, respectively (Chart 1). In our opinion, figures remain boosted by high prices across several categories –as figures are presented in nominal terms–, along the recovery of global trade, with slightly better conditions in the month. In particular, oil flows maintain high growth rates. Details are presented in Table 1. With this, the trade balance accumulated a US$25.3 billion deficit in the last twelve months, with oil at -US$28.9 billion and non-oil at +US$3.7 billion (see Chart 2).

Regarding the oil sector, prices remained high, advancing modestly relative to the previous month. In this sense, the Mexican crude oil mix averaged 109.8 US$/bbl from 106.1 US$/bbl. Meanwhile, gasoline front-month futures went from about 3.78 to 3.99 US$/gallon in the same period. However, using other reports, volumes shipped seem to have declined, especially in shipments abroad. As such, the outperformance of imports (+21.7%) relative to exports (+5.6%) is not a surprise. Within the former, the driver was once again consumption goods (+36.9%), in our view boosted by higher mobility despite an uptick in COVID-19 cases in the last part of the month. In the latter, strength centered in crude oil at +5.8%, consistent with efforts from Pemex and the Federal Government to maximize oil revenues.

In non-oil, performance was mostly better. On exports, agricultural goods fell 1.7%, consistent with drought conditions, although contained by higher prices. Non-oil mining declined 22.9% after a 9.8% expansion in the previous month. More importantly, manufacturing rose 1.5%, with strength in autos at +4.0%. This contrasts with AMIA figures, suggesting that the boost might be coming from parts. ‘Others’ were more modest (0.4%), but still higher despite a difficult base. As such, the sector has remained resilient despite mounting headwinds and has been one of the key growth drivers in the last couple of quarters. In imports, the decrease in contagions and the withdrawal of restrictions in China seem to have pushed flows higher. This is especially evident in both intermediate (+4.2%) and consumption goods (+1.8%). We should note that the latter stayed in expansion for a 10th consecutive month, likely supported by high prices. On the contrary, capital goods contracted 1.0%, adding two months lower. In our opinion, this component might be starting to reflect some of the fears about the possibility of a recession in the medium-term.

Dynamism could continue in the short-term, although risks ahead are looming larger. Today’s results are favorable, supported by better global trade conditions, especially out of China as contagions fell and some restrictions were lifted. As such, outflows from said country accelerated. According to that country’s statistics agency, Chinese exports to Mexico climbed to US$7.4 billion in June, a new historical high. Considering some shipping delays, we expect this to have an additional positive spillover effect in July. Moreover, backlogs in US western ports (e.g. Los Angeles and Long Beach) have decreased drastically, by around 80% relative to the beginning of the year (to just around 20 ships). Nevertheless, we need to be careful reading this, as it could be explained either by higher efficiency in the processing or due to a reduced inflow in ships, with the latter being a negative sign.

Other timely indicators suggest that some weakness might materialize. In particular, S&P Global’s manufacturing PMI for the US fell to 52.3pts, its lowest in the aftermath of the pandemic. The metric was impacted by a decline in ‘new orders’, although with cost inflation moderating marginally. This is generally consistent with trends seen lately in several commodities –mainly in raw materials– and shipping costs.

Domestically, activity seems to have decelerated towards the end of the quarter, in our view impacted by persistent price pressures, a renewed outbreak of COVID-19 cases, and the temporary suspension of social program payments due to the electoral ban. However, other short-term signals seem to be improving, with contagions seemingly reaching a peak in mid-July and payments resuming at the start of the month. Some fundamentals have remained strong, such as remittances and loans, which could continue supporting dynamism ahead. On prices, the outlook is still challenging, with a mixed performance across energy and food prices maintaining an upward trend. This is particularly relevant as these could induce changes in consumption patterns, possibly impacting inflows of some non-essential goods.

In this context, we believe these results are slightly better than those embedded in our 2Q22 GDP forecast –to be released on Friday– at 0.7% q/q. Although we do not revise the estimate, risks are somewhat tilted to the upside. Going forward, the probability of a recession has increased globally, partly fueled by the withdrawal of monetary stimulus. However, we believe that, given the gap in the recovery, the economy has still some room to run, especially this year, expecting this to support flows for the remainder of 2022. 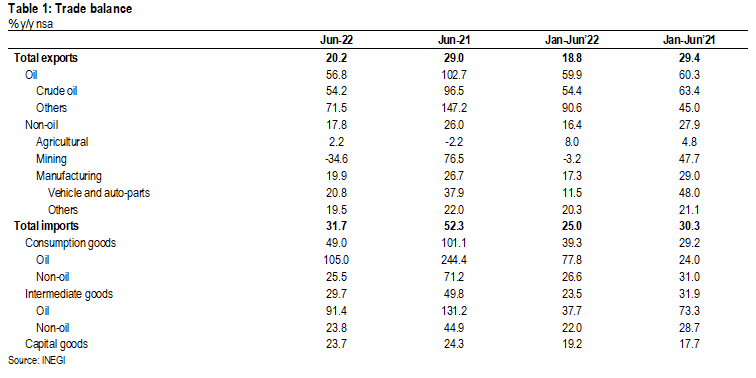 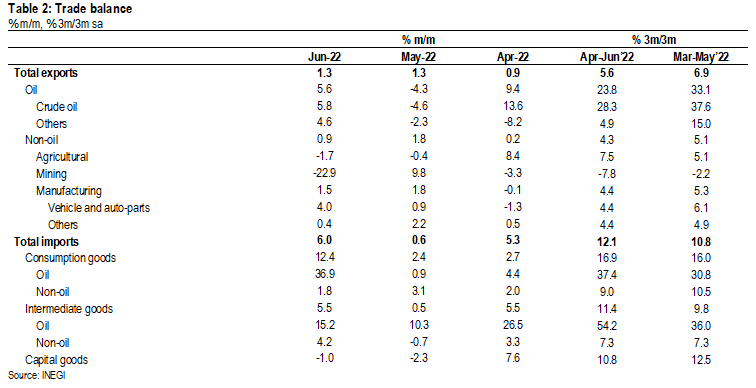