US$2,701.0 million deficit in October. This was wider than consensus (-US$1,960.5mn) and our -US$1,721.0 million estimate. This represents a fourth consecutive month in negative territory, in our view still reflecting persistent supply chain disruptions. In annual terms, exports did not grow (0.0%), while imports are still advancing strongly (25.1%), still helped by a base effect, as shown in Chart 1. In the former, oil exports accelerated to 105.9% y/y, helped by higher prices of the Mexican oil mix (109.8%). Non-oil fell 3.5%, in part because of a more challenging base effect. Agricultural goods (4.7%) and mining (6.0%) improved at the margin, with manufacturing weaker (-4.0%). Within the latter, the auto sector weakened even more (-21.8%), albeit with ‘others’ (6.2%) also lower. In imports, oil remains high (72.8%). Non-oil increased 21.2%. In them, we highlight consumption. Details are presented in Table 1. The trade balance accumulated a US$2.8 billion deficit in the last twelve months, with a US$22.9bn deficit in oil and a US$20.0bn surplus in non-oil (see Chart 2).

Mixed signals in terms of sequential performance. Total exports barely grew 0.2% m/m, with imports stronger at 1.1%, albeit up after falling in the previous month (see Table 2). Specifically, dynamics within several components suggest that supply chain issues are still a key determinant behind flows. Moreover, we are cautious about the data as it could be skewed higher in nominal terms due to high inflation pressures worldwide.

In oil, shipments abroad accelerated 11.4%, which seems explained mainly by higher prices, with preliminary reports showing weak volumes. This would be consistent with reports about delays in shipments and unfavorable weather. Imports were up 2.7%, rebounding after falling 7.5% in the previous month. Strength centered in intermediate goods (5.1%), with consumption stringing its third consecutive month on the downside at -2.7%. The latter is in line with reports about the reopening of the Tula refinery, which may have helped compensate for fuel imports.

In non-oil, exports fell 0.6%, which is not very surprising after considering the 3.0% advance of the previous month. Only non-oil mining went up (50.7%), in part because of a base effect. Meanwhile, agricultural goods fell 2.8%, even after reports of few climatological distortions in the month. In manufacturing (-1.3%), we saw contractions in autos (-3.8%) and ‘others’ (-0.3%). In the former, we believe the shortage of semiconductors remains a key issue, with reports of additional stoppages in several plants. Nevertheless, this contrast with better signals from AMIA (at the margin), as well as from the same sector in the US. In ‘others’, it seems that disruptions have had a more modest impact, albeit they are also impacting dynamism. At the margin, the sector seems to be is still benefitted by strong demand, although it is also likely translating into higher prices. In imports (0.9%), strength was centered in consumption, up 3.2%. We believe this is associated with preparations ahead of the discount season in November and year-end shopping. Intermediate goods were more modest at 0.7%, in part because of the slowdown in manufacturing. Lastly, capital goods were unchanged, possibly resenting exchange rate depreciation.

Further signs of a recovery, albeit with higher uncertainty about the pace. We believe today’s results are somewhat mixed, with cautious signals for industry and dynamism in imports that may be amplified by the recent increase in prices. Despite of this, it is our take that conditions are more favorable than in the previous quarter, which should provide an additional push higher to economic activity. At the margin, most recent data support this view. In the US, November’s PMI manufacturing rebounded to 59.1pts after three months lower. The report mentions that this was driven by new orders, consistent with strong demand. Nevertheless, managers still complain about the supply of raw materials, both because of their scarcity and cost, so delays increased further in the period.

This suggests that challenges at the domestic level are still in place. In this respect, we will watch closely to the ISM manufacturing in the US and IMEF indicators in our country. So far, we have had news about additional factory stoppages, such as VW. Regarding supply chains, the problem with semiconductors seems to be diminishing according to some producers such as Micron, with waiting times falling at the margin. Nevertheless, others have mentioned that distortions will remain at least until 2022. In this backdrop, the secretary of Economic Development of the state of Aguascalientes, Alejandro González, stated that stoppages will likely continue at least until 1Q22 according to automotive companies. Related to this, Fitch Ratings said that the lack of chips will impact GDP about 1% this year, with these problems persisting in the first half of 2022. In other issues, China is still implementing some lockdowns. This not only affects production but also adds to the uncertainty about the planning of shipments. It also represents an additional logistic challenge, further complicating the situation.

On domestic demand, marginal signals seem better, with the possibility of an acceleration in year-end purchases given a more favorable epidemiological backdrop. Nevertheless, our main concern in this front is still price pressures that affect households’ purchasing power. Looking ahead, we will watch closely the potential impact from the new wave of COVID-19 during the winter, especially after a new variant has emerged in South Africa and other countries in the continent which may be more contagious than ‘delta’.

We believe this may have a more immediate impact on investment as it adds additional risks about the recovery and the adequate moment to invest.

Lastly, we will continue monitoring price dynamics in oil, especially after the recent announcement of the release of strategic reserves by several countries, waiting for the response from OPEC+. In this environment, prices have moderated after reaching highs not seen since 2014. On the other hand, we believe that some restrictions remain in terms of volumes. In contrast, we could see stronger fuel imports given higher mobility. 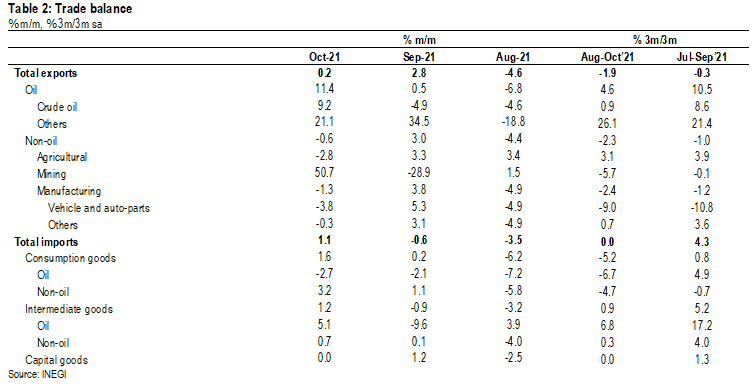