Tourist destinations tend to bounce back from security setbacks: Egypt, Indonesia, Jordan, Kenya, Lebanon, Morocco, Philippines, Thailand, Tunisia and Turkey are all examples from the frontier and emerging markets in the past two decades. And, of course, France, the UK and the US, among others in the developed markets, have experienced similar issues.

However, the scale of the attacks in Sri Lanka this week, with about 300 fatalities, has few precedents. To put that tragic figure into context, it would be equivalent to 4,500 in the US, if one adjusts for the scale of the population.

In general, the frontier and small emerging market tourist sector, arguably, is different from that in developed markets for the following reasons:

(1) Tourist sites and amenities tend to be concentrated in fewer locations and cities.

(2) The reliance on international visitors (presumably, more sensitive to security concerns), as opposed to domestic ones, is greater.

(4) Ease and comfort of travel also has a knock-on impact on foreign direct investment and, to a lesser degree, business travel linked to trade (in reverse, chronic insecurity creates a barrier to entry in favour of local businesses).

Across a broad sample of frontier and small emerging markets, the following have over 5% of GDP directly driven by tourism (the indirect contribution via the growth of adjacent sectors and the multiplier effect from employment in the tourism sector can be double to triple this figure): 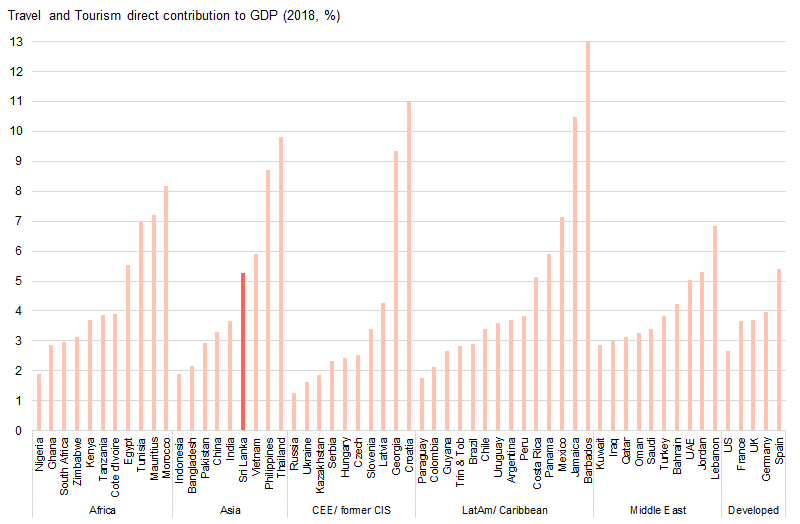