Tinkoff Bank: Farewell (for now) to the founder

Oleg Tinkov, founder of Tinkoff Bank/TCS Group (AKBHC) has stepped down as Chairman of the Bank's board. He has been replaced by Stanislav Bliznyuk, who was previously head of business development.

This decision comes after Tinkov disclosed that, sadly, he has been diagnosed with acute leukaemia. The decision also comes after the US authorities indicted the founder on two tax-related charges. We commented on the tax issues in the note here.

As of 19 March, Oleg Tinkov also transferred his interest in the group (40.4% economic rights) to a family trust. This was done to ensure the shares remain in his family in the event of his passing. TCS Group has stated that Oleg Tinkov ‘remains the ultimate beneficiary of his holding’.

Having said that, the group has emphasised that Tinkov is not involved in its day-to-day operations. In previous disclosures, TCS Group also stated that headlines from the US have not impacted customer behaviour.

Changes to the Bank’s board and Tinkov’s decision to move his shares into a family trust may increase speculation about a change in ownership at the bank, even though Tinkov intends for his interest in the Group to remain in his family. We discussed this issue in another report. It seems likely that there would be a buyer, if the shares needed to be sold, given the bank's strong core business, and digital platform.

Separately, TCS Group expects certain changes in legislation enacted to address the impact of the Covid-19 pandemic to impact revenues, provisioning and Stage 2 or 3 loans. Caps (until end-September 2020) on interchange and acquiring fees for select online goods purchases will impact fee income, though the issuer’s comments suggest the effect of this should be manageable. Payment holidays for borrowers of up to six months (which can be requested until September 2020) may impact interest income and provisioning. These exposures may also need to be classified as Stage 2 or Stage 3 loans, and much will depend on the number of borrowers that request these payment holidays. The issuer expects to disclose more on the impact of these changes in legislation on 13 May, when Q1 20 results are due.

We note that S&P recently stated that profitability at Russian banks is expected to fall by at least half this year. Further, given the current market malaise, there may be questions about liquidity and capital at Tinkoff Bank/TCS Group. On profitability, this issuer generated a return on equity of almost 56%, so the base is exceptionally high and a decline in this ROE could still leave Tinkoff Bank as one of the more profitable lenders in CEEMEA. On liquidity, Bloomberg data shows no bonds maturing this year. In addition, the issuer has just one eurobond outstanding – the US$300mn perp, which is not callable until 2022. On capital, the Group completed a US$300mn capital raise last year. This, a dividend suspension and strong profit generation meant that shareholders’ equity more than doubled in 2019 – to RUB96bn from RUB42bn. The Basel III CET1 ratio was 15.9% at the end of last year, up from 9.6% at end-2018. 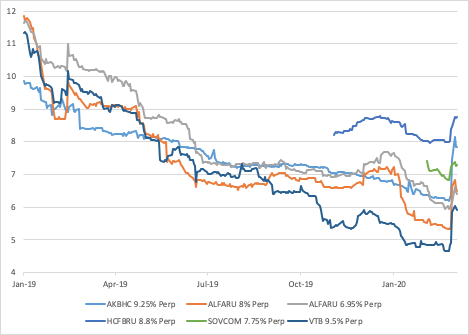 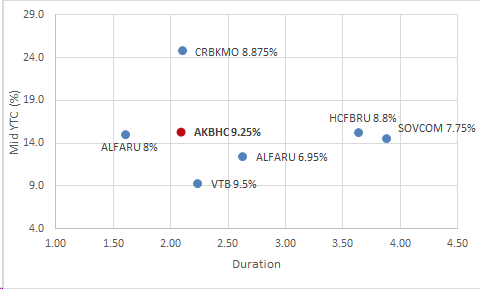