Tightening global financial conditions as a result of aggressive monetary policy tightening by major developed market central banks has had a notable impact on the debt dynamics of countries across Africa. Not only has the aggressive Federal Reserve and Bank of England policy tightening triggered massive capital outflows in Africa, but it has also driven up the cost of borrowing.

The deterioration in lending conditions has seen many African countries cancel plans to tap the Eurobond market to plug budget shortfalls. Debt servicing costs have surged, and in some instances, bond yields have more than tripled over the past 12 months. This piece aims to provide an overview of the impact tightening global financial conditions have had on these countries. Almost all African countries are experiencing pressure on their public finances. However, the tightening shock has been more pronounced in countries that were already at high risk of debt distress or already in debt distress.

Inflation has defied expectations everywhere. Most of all, inflation-targeting central banks now face inflation above their target range. Supply-side disruptions, rising food and energy costs on the back of the Ukraine war, and pent-up consumer demand after the coronavirus pandemic are some factors that have resulted in surging prices around the world. As a result, central banks globally have embarked on policy tightening to try and curb inflation. More recently, expectations for how drastically central banks need to tighten monetary policy to fight soaring inflation have taken another leap higher, shaking up global markets and ratting investors. 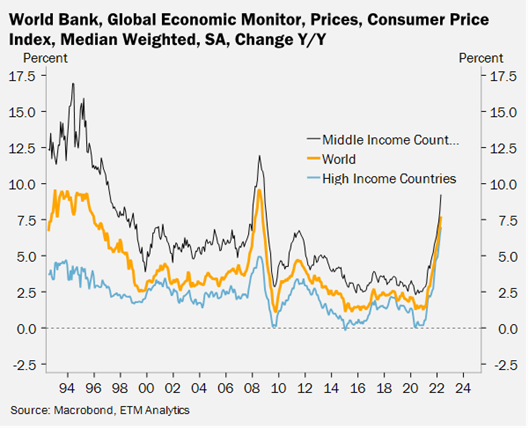 Notably, the Federal Reserve, after holding its benchmark Federal Funds rate at a record low levels throughout 2020 and 2021, in response to the economic effects of the coronavirus pandemic, implemented its first rate hike since December 2018 in March. The initial 25bp hike in March was followed by a 50bp increase in May and 75bp in June, the largest rate hike since 1994, as inflation showed no signs of peaking, and expectations are that this hawkishness will persist in the coming months.

Several countries have cancelled plans to issue Eurobonds in recent weeks on account of the marked increase in international lending costs. Nigeria scrapped plans for a Eurobond issuance worth $950mn this month, citing unfavourable market pricing. The Ivory Coast cancelled its $1bn international bond plan and instead opted to sell in the regional West African Economic and Monetary Union. Meanwhile, Egypt has postponed the issuance of its first sovereign Sukuk till its new fiscal year, which runs from July 1 to July 30, attributing the postponement to market turmoil. 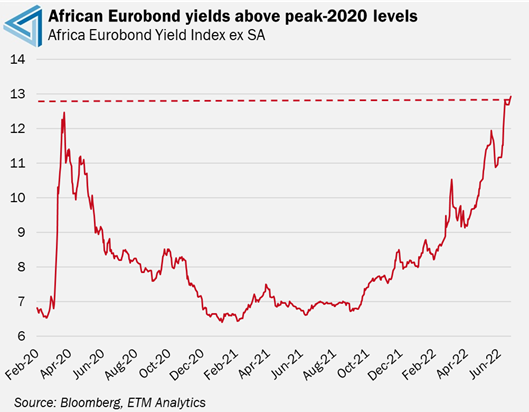 More recently, Kenya shelved plans for a $1bn Eurobond issuance with the Treasury Secretary citing "extremely high pricing" and is instead planning to borrow around $1bn from banks by the end of June. Kenya is seeking funds "as bridge financing from a couple of banks." While no details on the lender involved have been provided, the Head of Kenya's public debt management said that the country expects "low single-digit rates."  Kenyan Eurobond yields have risen significantly over the past 12 months as markets price for tighter global monetary policy conditions and mounting political and fiscal risks ahead of the August polls.

The move by Kenya follows Ghana, which has sought funding from international banks after higher debt, budget deficit levels, and costs saw the country lose access to the Eurobond market. International Banks have pledged to lend Ghana $1bn for budget purposes and to boost the central bank's reserves as the country seeks to reduce its fiscal deficit and stabilise the currency. Ghana has reportedly raised $750mn through syndicated loans with the participation of about eight African and European banks and $250mn from multilateral lenders. The transaction is the first part of $2bn in syndicated loans that Ghana targets to raise this year to stabilise its finances and financial markets. $750mn of the syndicated loans is expected to go to the budget for expenses and liability management, and the rest will go to the central bank to up its resources for swap deals.

As global financial conditions tighten, dollar liquidity moderates. As the supply of dollars to the global financial system slows, there is less hot money to divert to riskier and frontier market assets. It is unsurprising to see that dollar liquidity challenges have weighed on some currencies in the region. A weaker currency in the case of Kenya has increased debt servicing costs by KES 300bn ($2.6bn) in the fiscal year ending this month. Kenya's external debt makes up half of the public borrowings. The dollar-denominated debt accounts for 66% of Kenya's external debt, followed by the euro at 19%, Japanese yen, and Chinese yuan at 6% each. Note that the Kenyan Shilling has depreciated by around 4% on a year-to-date basis mainly due to pressure from demand for hard currency, given Kenya is a major oil-importer. Tighter financial conditions are also likely to see the budget deficits widen further than what is currently forecast by the IMF as debt servicing costs start to account for a significant portion of revenues.

Bottom Line: Tightening global financial conditions as a result of policy rate increases in advanced economies, coupled with the war in Ukraine, has driven up debt servicing costs and made it significantly more expensive for African sovereigns to refinance themselves, leading to debt sustainability fears for many countries in Sub-Saharan Africa. The International Monetary Fund already classifies countries such as Ghana and Kenya as being at a high risk of debt distress. We expect debt sustainability concerns to heighten in the near term, especially as the Federal Reserve, along with many other DM central banks, show no sign of letting up on their aggressive monetary policy stances to fight inflation which has proved to be sticky. African countries are expected to look at alternative financing options, including concessional loans, multilateral loans, and potentially raising local currency debt issuance. The problem is that the domestic bond markets have already been exhausted, leaving the government with few options other than concessional, commercial or multilateral loans.